The new year, for many Muslim women, began with a bolt from the blue. Sixty-seven-year-old Khalida Parveen was surprised to find her name on a list along with 111 other Muslim women being auctioned off on the Bulli Bai app. The social activist, who has been vocal against right-wing ideology on her social media platforms, was informed of this by a friend. Parveen was the oldest woman on this list and was left disgusted by the actions of the culprits. 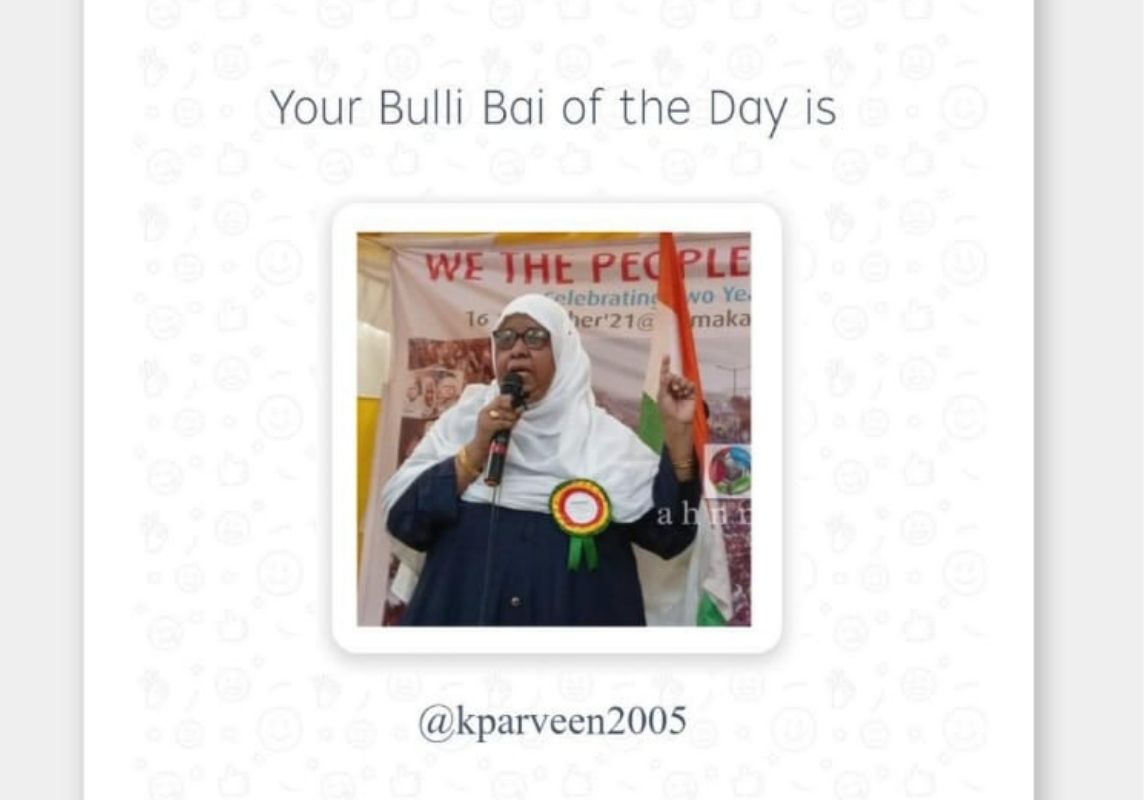 “I genuinely felt regret because I am 67 – old enough to be their mother or grandmother. What have I done to deserve this? These kids might be involved in some planning but it’s very superficial but what is the root of all this? Who is raising them this way? Who is inciting them? Who is responsible for establishing so much hate in their hearts?” she asks.

Parveen says she felt deep regret for the young offenders and that a much deep-rooted investigation on their thought process and upbringing needs to be done to prevent more youth from going in this direction.

About 112 Muslim women were being auctioned off on the Bulli Bai app, which is the second version of the Sulli Deals app on GitHub. The app took photos of Muslim women from their social media handles for their profiles on the program and then auctions them off in what it described as “deals of the day.”

Based out of Hyderabad, she was an important presence during the first and second Covid waves and organised several relief programs for the needy and underprivileged. The activist has also been unwavering in her stand against the Citizenship Amendment Act (CAA) and National Register of Citizens (NRC) and was involved in the large-scale protests that took place in December 2019 and January 2020. Parveen as a member of the Amoomat Society has also been active in empowering Muslim women to pursue higher levels of education.

Over the last few days, Parveen has taken on another important role. As more Muslim women found their name on the Bulli Bai app, she has taken on the responsibility of fighting for these women. Parveen, who says she feels neither scared nor ashamed, adds that she is fearful of the future when she sees the country’s future indulge in such distasteful activities.

Parveen says that this insecurity about India’s youngsters had galvanized her to put an end to this, “I will take the lead come what may even if someone else decides to come fight me or not. I have come to this decision.”

Having spoken to several other victims of the Bulli Bai app, she says that she wants to stand-by all the others who are faced with such an unfathomable situation. Parveen adds that this in particular is harder on unmarried Muslim women or newly-married women.

“At my age, I am stable and settled. My kids are all grown up so, I am not as affected by it and nobody will say anything to me. But those who are unmarried or just married, their families are scared. And that, in turn, puts more unnecessary pressure on these women who feel as if they are not only fighting to save their self-respect, but also everyone around them,” says Parveen.

She has been a constant source of support for her fellow victims and even offered to visit their families to help them understand the graveness of this situation. The social worker when speaking to the families emphasizes that this is a conspiracy towards their community and conspiracies can happen even while these women are within the comforts of their homes. The fear of their names becoming public has been a factor for Muslim women in not coming forward to register complaints and file an FIR.

Parveen wants more Muslim women to speak up in the future for their rights, “I was hoping that there would be another woman who comes forward and tell me she wants to file a complaint and speak about what she’s been put through.”

This incident of hate and targeting of the Muslim community follows the much controversial Dharam Sansad event which took place in December 2021. The convention witnessed a massive congregation of influential Hindu seers led by Yati Narsinghanand in Haridwar – many of whom were accused of multiple instances of inflammatory, hate speeches.

Parveen feels that the pressure to act on the seers was too much for the Modi-led government to handle and that a distraction was required. The Bulli Bai app served that exact purpose.

“There were a lot of powerful Muslim voices who rose up against the hate speech and there was a lot of pressure to arrest them,” she concurs adding, “I can see the mentality of these hateful right-wing seers influence the minds of these young kids who were arrested for Bulli Bai.”

The activist had filed an FIR with Cyberabad police’s cyber-crime divisions and sought relevant action against the wrongdoers under section 67 (punishment for publishing obscene material in electronic form) of the Information Technology Act and sections 354 D (stalking) and 509 (gesture or act to insult the modesty of a woman) of the Indian Penal Code for “dangerous, misogynistic, and communal content.”

Parveen says she will fight for as long as it takes for the offenders to be punished, adding, “We will raise our voice to fight. We will fight according to the laws of democracy.”

“No Idea Why I Was in the Hospital” : Delhi’s First Omicron Positive Personal Account
My Brother Died in Lakhimpur. Truth About His Death is Still Not Out