The Edifice of Gender Justice in JNU is Collapsing Fast, the World Must Know Why!

Jawaharlal Nehru University (JNU) – one of the premier institutions of the country has once again made headlines – this time not for criticizing the ruling establishment or for speaking truth to power, but for an attempted rape case reported by a female student within the campus grounds. 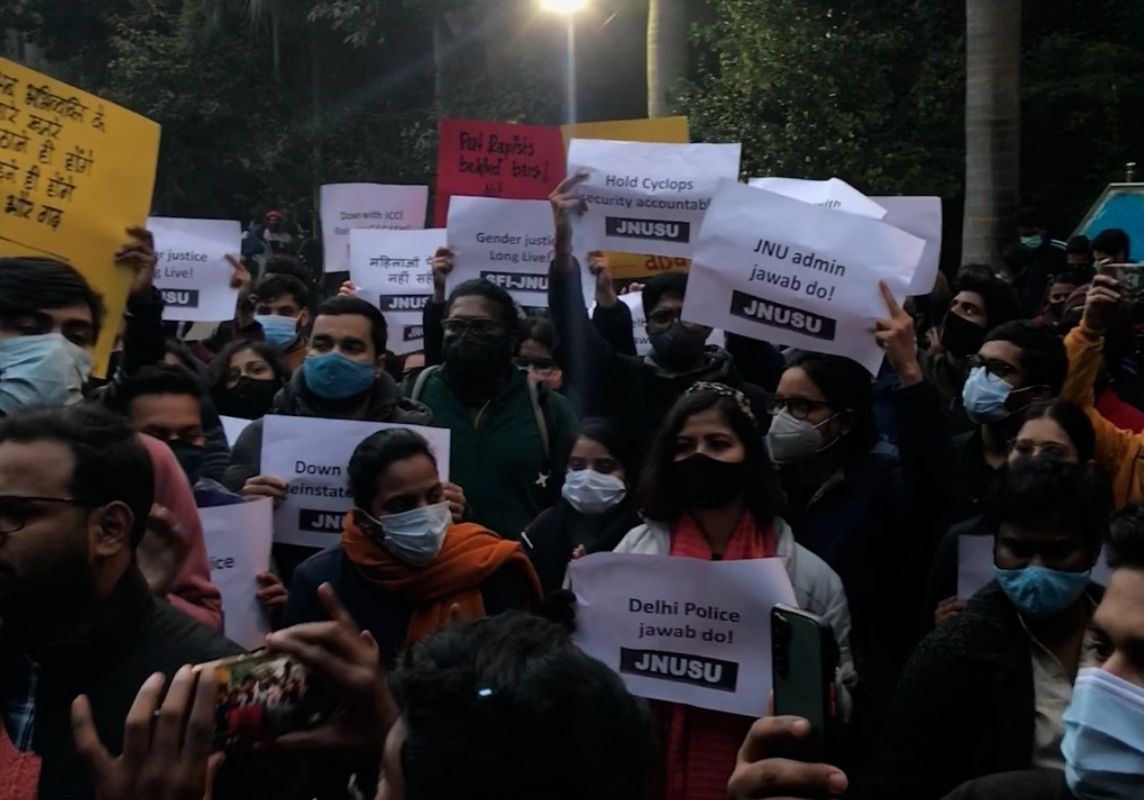 The incident has come as a shock to the students of the university, a rare instance that has left immeasurable aftermath. Having known the JNU campus for a couple of years now, I can reaffirm how these grounds have been a secure haven for students coming from marginalized sections of society, women, and sexual minorities.

When I contemplate the recent incident, I can’t recall whether JNU can be called that anymore.

To be able to comprehend the enduring reverberations of recent events which have fractured the core tenets of “the JNU Culture,” we need to understand how the idea of gender justice and women’s safety influenced the vision of this premier institution.

In September 2017, the Gender Sensitization Committee Against Sexual Harassment (GSCASH), which was established for securing women’s autonomy and ensuring gender justice on the part of teachers and students of the university, was dismantled by the JNU Administration in September 2017.

Several former students have narrated to me how GSCASH played a crucial role in making the campus a safe space for women and sexual minorities. It was this organisation that made sure that the university becomes a place where students unlearnt their anti-women, patriarchal conditioning while reforming and sensitizing themselves through workshops, seminars and mutual engagement. Even post the dismantling of GSCASH, the student politics of the university followed in its footprints of Gender Justice.

So, who should then be held responsible for the current dreadful state of affairs wherein female students who never felt afraid of walking out of their hostels at midnight now hesitate?

The JNU Administration must be the first agency to be blamed. In 2017, the university administration deliberately disassembled GSCASH and replaced it with the Internal Complaints Committee (ICC). The latter proved to be nothing more than a puppet body of the administration itself.

The ICC has no student representative and is known to give clean chits to serious sexual offenders. Its nonsensical and ridiculous interpretation of gender justice can be understood by a recent circular uploaded by the committee on the university website. The letter advised women students to “draw a tangible line” from their male friends to avoid sexual harassment.

What expectation can one have from such a body which blatantly blames the survivor for harassment she has to go through? It seems the administration has no interest whatsoever in making this campus safe and inclusive for its students.

Since joining JNU in 2017, I have yet to come across a single workshop organized by the ICC for new students where they are made to go through the rigorous process of gender sensitization to shed their patriarchal and misogynist biases. The only steps that it has taken in the name of securing safety for all are promoting the culture of surveillance and moral policing through attempts like the installation of CCTV Cameras, curbing the mobility of students within hostels, and imposing curfew timing for female students.

The women students have been repeatedly victims of severe abuses and massive smear campaigns by those within the campus grounds and the public outside. Every slur hurled at JNU is aimed first at its female students. We have been labelled as “characterless”, “easy”, and “whores.”

The mainstream media and the massive troll army on social media also share the blame for what all is happening to female students of the university now.

Shutting down the JNU campus in the view of the COVID-19 pandemic has also to share the blame for the current state of affairs. Due to the lockdown, new students did not get the opportunity to be physically present on the campus and learn through mutual interaction with the larger university community about the basics of gender justice.

The effect of this is clearly visible in the increased number of eve-teasing cases within the campus wherein the accused are other JNU students. For a year or so, I have heard innumerable misogynist and sexist conversations among groups of men around the campus – an unusual sight within the grounds earlier. The four walls of the JNU Campus used to be a different world for students belonging to the underprivileged sections of society. It wasn’t just a physically safe space for us, but also a psychologically and mentally comforting place where women were free to explore, express and be themselves. 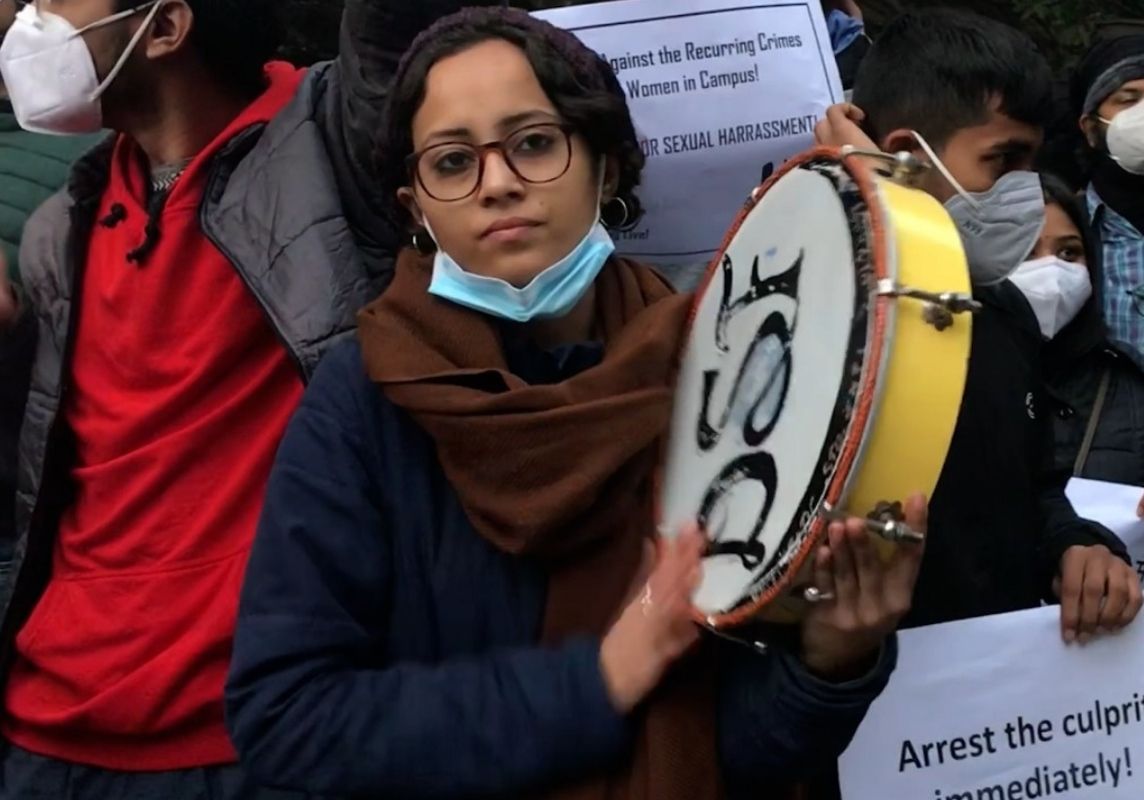 We have seen women in JNU roaming around the campus till early morning, participating in politics, firmly putting their opinions inside and outside the campus, arguing for themselves, raising slogans, painting and putting up posters.

The gradual crumbling and degrading of this university space now fill us with mixed feelings of sadness and anger. As a female student of the institution, I feel as if we are losing a home now – the only place in India which we could claim for ourselves. But among all the despair, the women of JNU won’t bow down. We refuse to cede their space to patriarchal forces. We refuse to give up on their home.

As the popular feminist slogan, which keeps echoing within the JNU campus every now and then, asserts “BEKHAUF AZADI ZINDABAD!” (FEARLESS FREEDOM LONG LIVE!), the women of JNU have resolved to fight back.

Khushbu Sharma is a Research Scholar at Jawaharlal Nehru University.

Daughter Burnt By Her Husband While Pregnant, Now Her Mother Is Fighting The System For Justice
I Was Asked To Resign From University Because Of A Private Swimsuit Picture