Glaring Gaps in Safety: An Emotional Appeal By a Grieving Father

I write this appeal to the President of India a month after having sent my son Capt. Jayant Joshi, a martyred soldier of the Indian Army, on his last journey on October 19, 2021. 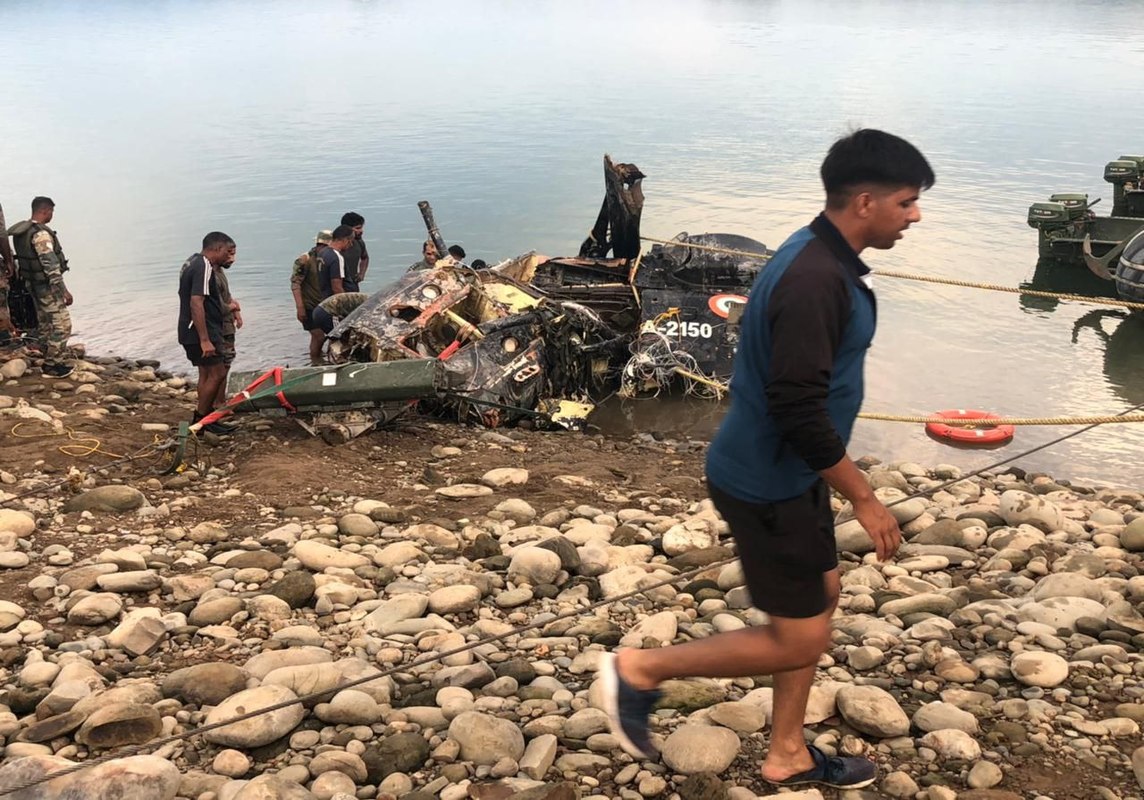 Jayant, a pilot of Rudra Weapon System Integrated (WSI) attack helicopter of 254 Squadron, Army Aviation, made the supreme sacrifice in the line of duty on August 03, 2021. Along with Lt. Col. A.S. Batth, a test pilot and an aviation instructor, Jayant was flying a mission sortie, practicing target acquisition and deployment of integrated weapons. It was during this sortie that his helicopter crashed in the Ranjit Sagar Dam at Jammu & Kashmir. Both the pilots drowned in the deep waters.

What followed was a long underwater search. With their determined and war like efforts, members of the Indian Navy search team retrieved the body of Lt. Col. Batth on the thirteenth day of the crash.

In the case of my son, it took them 76 days to discover him. I am deeply grateful that despite unprecedented challenges, the Navy team succeeded in retrieving his body on October 17.

During the course of this search operation, I had made two appeals to the President’s office for necessary equipment support for the search operation and to not leave my son in the waters for a permanent water burial. My family gratefully acknowledges your intervention in the matter. Had you not intervened, my son would have been lying in the watery grave forever.

GLARING GAPS IN THE SAFETY PROCESSES BEING FOLLOWED IN ARMY AVIATION

Today, I once again seek your intervention. The crash has exposed many glaring gaps in the safety processes being followed in Army Aviation. It has also apparently revealed an attitude of apathy and disregard in the matter of pilot safety and training needs among those responsible for the affairs of Army Aviation.

Your intervention, Sir, followed by an immediate course corrective action can save lives of many army pilots in the future. Though, admittedly, I am not an aviation export, I present some of the basic facts of this case which I had gathered during 76 days of long wait for my son and my several visits to the crash site.

Rudra WSI, an Advanced Light Helicopter is currently the mainstay attack helicopter of the Indian Army. As per my understanding, it is meant to fly low to avoid detection and fire by the enemy. It is meant to fly over ground.

My question is that if, perhaps, the Rudra was not meant to be flown over water, then why were the helicopters of the squadron being routinely sent to fly over a vast expanse of water that was 25 kms long and 8 kms wide? This information on the expanse of water was often put out in the public domain by army’s own publicity wing.

I was told that it was the only area available for low flying as it was free from obstacles. If that be the case, did anyone responsible for running the affairs of Army Aviation, from top to down the squadron command level, realize the basic survival training needs of the men and provide them with the necessary safety gears before sending them for flying over water? Were they not aware of these needs? Did they not know that their pilots were risking lives by flying over a vast water body every day? I am of the opinion that they did know but chose to ignore and disregard these critical requirements.

As per my understanding, flying over water as a routine requires specialized training about depth perception which is different from flying over land, due to reflection from water surface. If not trained and while over water, a minute miscalculation about the depth on the part of pilots may cause them to hit the water and crash.

I am told that as per cockpit voice recorder/flight data recorder (CVR/FDR) analyzed by the court of inquiry team, while flying very low and deeply engrossed in acquiring the target, and aligning it on to the integrated weapons, both the pilots did not realize that they were going to hit the water. In plain words, it appears that they missed the depth perception and crashed to death.

In my opinion, since they were not trained for depth perception, the crash was inevitable. This is one version of circumstances and reasons leading to the crash. There are many eye witness accounts and a CCTV footage and all these present a different story. The CCTV footage shows a flash in the aircraft followed by a smoke trail and while trying to maneuver the aircraft towards the ground for landing, they crashed in the water. One eye witness account says the helicopter suddenly lost control and crashed in the water with a loud explosion. Yet another says the rotor blades broke mid-air sending the helicopter out of control and crashing.

I have no means to find the exact reason behind the crash except what the court of enquiry investigation has established, a little about which I have learnt. Both pilots are dead, they cannot present their view point, the court of inquiry report will never be made public or shared with the family.

It appears that a lack of training as well as lack of basic safety gears for flying over water is perhaps to be blamed for this crash.  Unfortunately, all army pilots fly in the same situation.

My son crashed on the water at a speed of 170 kmph as per CVR/FDR finding. Despite this high velocity crash and impact, trained for muscle memory, my son was able to de-harness himself from his seat as he crashed. His seat belt was found to be properly opened when the aircraft wreckage was recovered. Made of composite material, the aircraft cabin had disintegrated into pieces, found floating after the crash. Clearly, my son was free from any obstacle to float. The same was thecase with the other pilot.

I believe that if a basic life-saving gear in the form of a life jacket been provided to my son, he could have floated on the water surface. He could have possibly be rescued to the nearest medical facility by the locals and the rescue boats of the dam authorities that had reached the crash site within 15 minutes of the crash.

Deprived of a life jacket, he was killed and went into the waters. The other pilot also met the same fate. In my opinion, chances of their survival were reduced to zero due to the possible criminal negligence to pilot safety and survival. Due to this, his body could be retrieved only after a 76-day long search.

Can the Army Aviation offer any explanation for the criminal disregard to pilot safety?

None of the pilots of my son’s squadron has undergone under water escape and survival training, I am told. A life jacket is not provided to them as an essential life-saving gear. In such a circumstance, they would be left to their fate, with the risk of India losing young defence personnel to such negligence.

The post mortem report of my son does not give any specific cause behind his death but helicopter crash injury leading to poly-trauma. There is no mention if my son received any injury to his brain and spine. His femur bone was found to be fractured. Drowned in the water for 76 days, most of his vital organs were found to be partially decomposed.

I saw my son before the post mortem on his body. He was completely intact and his body bore no visible mark of injury. He was bloated in the stomach and his face swollen due to long exposure to water.

I have consulted many doctors, some of them being in the field of forensic medicine. According to them, the post mortem report does not show any immediate life threatening injury which would have caused his death. They are also of the opinion that my son did not die instantly after the crash.

However, adverse circumstances could have led to his death, notable among these include the fractured femur of thigh (femur) bone making my son immobile, unconsciousness due to crash impact, asphyxia or difficulty in breathing due to injury which in some case lead to death, and hypothermia caused by exposure to cold water. A timely rescue and medical help could have still saved his life, they conclude.

I am sure my son would have been alive today.

I now have to make only two requests to the President.

The first one is to make it mandatory for all army pilots to undergo underwater survival training and alsoequip them with the essential life-saving gears, and ensure life-saving skill up-gradation through periodic training modules. Their flying machines should also be made float worthy.

This is even more critical considering the fast paced expansion of Army Aviation. In a recent media report, army sources have given a glimpse of this expansion plan – setting up new aviation brigades, induction of Light Combat Helicopters as well as Apache helicopters, and replacement of old utility helicopters with the modern and advanced helicopters. Transfer of drone assets to Army Aviation is also part of this expansion plan. Secondly, in the event of a war, army pilots will not have an option tochoose between flying over water or the ground in the enemy territory to acquire their targets.

My second request is to fix accountability for the death of my son and the other pilot and those responsible for the possible violation of safety norms, apathy and the apparent disregard to pilot safety and survival training be brought to book and a commensurate action be taken against them.

I have lost my brave soldier son at the prime of his youth all because of reasons cited above. Neither the Indian Army nor the Nation can compensate for his loss. An intervention by you, the Supreme Commander, may save other pilots from a similar fate.

I am not Oppressed, I am the Black Swan
The Edifice of Gender Justice in JNU is Collapsing Fast, the World Must Know Why!