“Want to Pass My Skills to the Youth of the Valley”

Initially, I intended to play cricket, but after trying my hand (read feet) at football with my cousins, I discovered that I like it more than any other sport. After two years of intensive practice, I started doing trick shots in 2018, “To do trick shots, you must be well familiar with the game. So I started with football.” My family constantly recognises my efforts and serves as a constant source of encouragement for me. 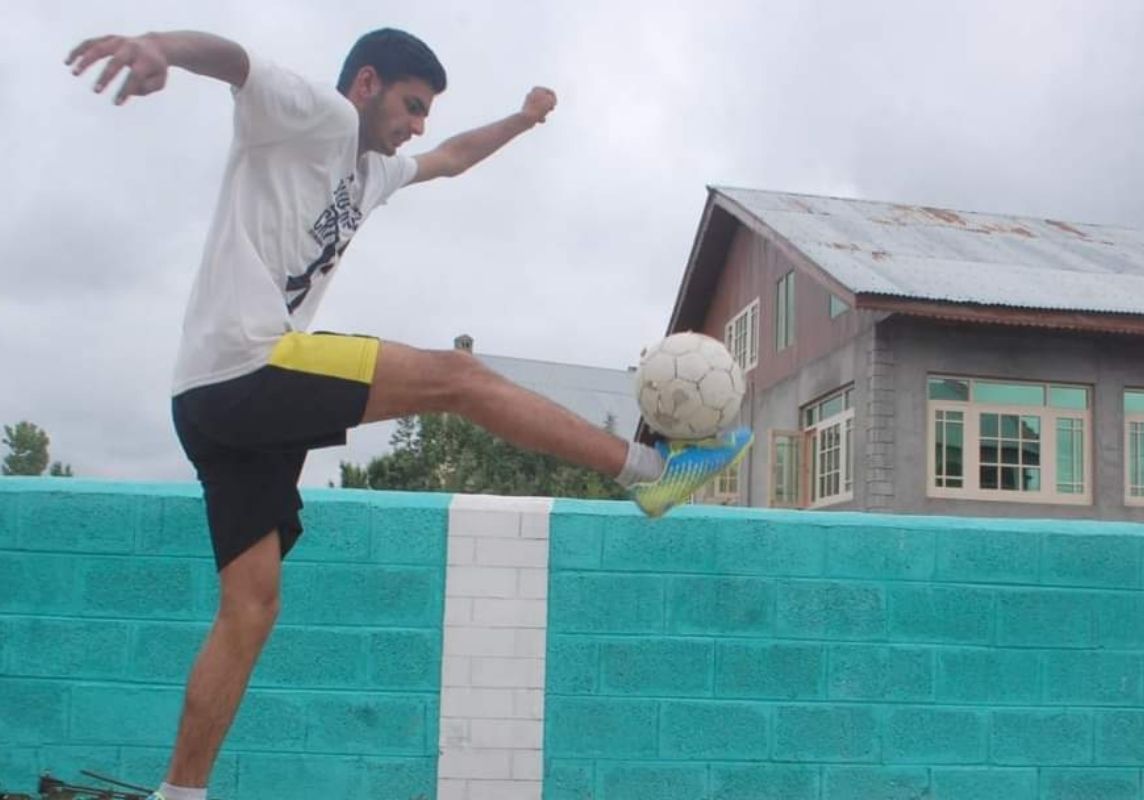 During the political instability sparked by the assassination of Hizbul Mujahideen militant commander Burhan Wani in July 2016, I was confined to my home as a 13-year-old boy, “However, to relieve boredom, I began playing football in my yard by myself.” Because the game requires a team to play, I discovered an unusual technique by attempting to master football tricks.

I continued to play traditional football until I came across some football trick-shot videos on YouTube, “I was blown away by what one of the guys did. His gravity-defying tricks captivated me.  I attempted to replicate some of the tricks on my lawn. I was smitten by what he did. I wanted to do the same.” I used to do tricks without looking at the target, which was always behind me.

The videos of my trick-shots have also been featured on social media sites such as ‘Oh My Goal’ and ‘People Are Awesome’ that have a huge following across the globe. One of my videos titled ‘Insane trick-shot — in which I kicked a tennis ball through two moving tape-rolls — generated around five million views on ‘People are Awesome’. With thousands of followers on my various social media accounts, I perform scores of trick-shots using balls of all sizes.

I was also chosen for Season 9 of India’s Got Talent, for which I travelled to Delhi, “Leaving Kashmir was a learning experience for me and I realised that there is a lot of potential for recognition in major cities.”

Furthermore, Real Madrid and Germany footballer Tony Kroos recently shared a video of mine on his Instagram.

Cristiano Ronaldo has always been a source of inspiration for me, “Actually, it was all about staying in touch with football and trick shots were the only way to do so.” I also saw videos on YouTube of Dude Perfect – American Entertainment Sports Group – performing football trick shots. That’s how I got inspired and started performing and posting videos on social media.

However, everything in life has a cost; when practising, my phones were repeatedly smashed by the ball and even my family members advised me to quit making videos and instead focus on my studies.

I’ve mastered 400 various types of trick shots, but it’s a time-consuming process that demands a lot of concentration. I’d like to receive greater exposure, and with certain facilities, I’d like to promote football and learn more, as well as bring this unique talent to all corners of the country.

So far, I have not received any assistance from the government. Some officials only post on social media about helping any talent but no one has come forward to offer assistance. These people wield enormous power and can help in reaching a large number of people.

My request to the government of Jammu and Kashmir is that they provide me with facilities so that I can teach our Valley’s youth my skills, “Trick shots are understandable, learnable and playable by all football players.”

‘Bulli Bai’: Fetishing and Sexualising Muslim Women on Internet
My son was a soldier. I have been looking for his body for 72 days