Crypto Christian: Dichotomy Between Desi and Videshi, A Recipe of Hate Against Christians

Escaping a thicket of a sugarcane field, Ranjit Kumar was trying to reach the house of the village pradhan (Head) – this memory still fresh in his mind. In an interview with the reporter, Ranjit described how on the eve of Diwali, a group of men led by ex-pradhan Harkesh Singh gheraoed (surrounded) his house. 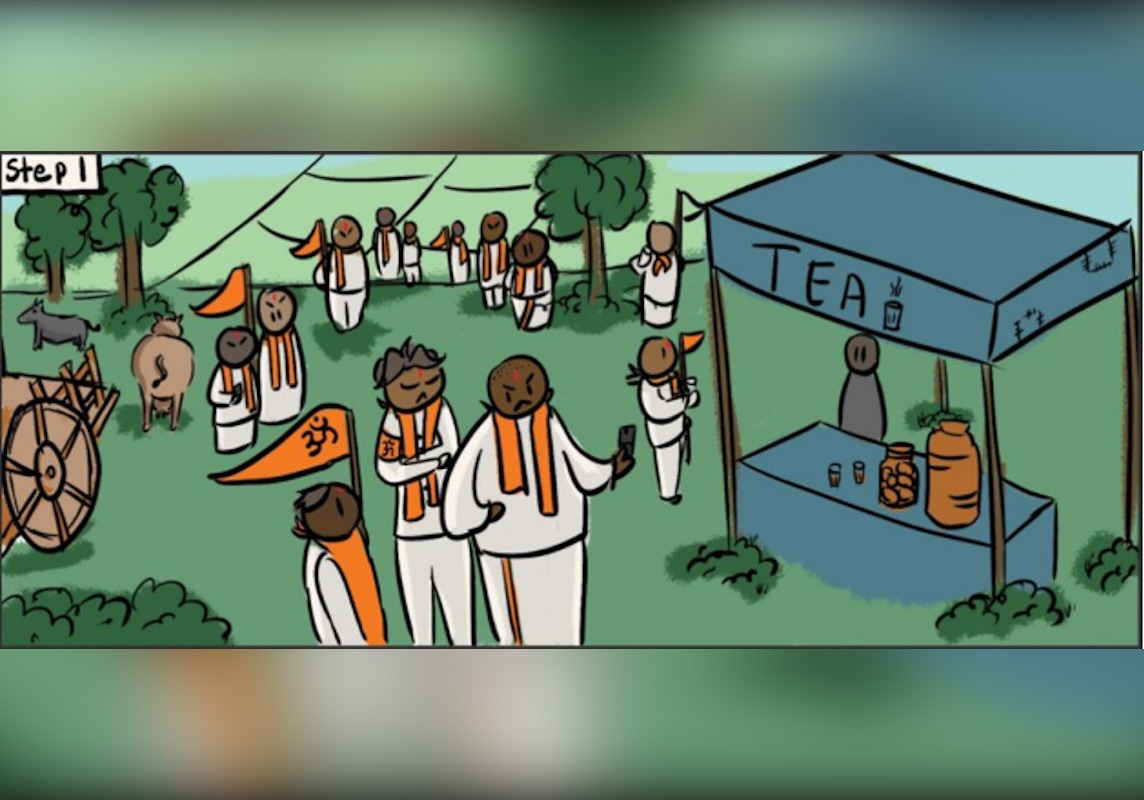 “We have a joint family — four uncles and their families,” Ranjit explained. “We’ve all gathered in our house to celebrate Diwali. I was eating dinner with my family when I heard a loud thud. When I stepped outdoors, I noticed 10-12 individuals with sticks vandalising our house. Looking at them, I raced quickly towards the sugarcane field to save my life, to call the cops and protect my family from harm,” he continued.

“When I returned from the [current] pradhan’s house, I saw that they had completely destroyed my house. My father was severely beaten,” Ranjit says, adding that the attackers did not even spare his mother whose right hand was also fractured. His uncle’s knee was also ruptured.

“This is our price for praying to Jesus,” Ranjeet muttered, despondently. Ranjeet, 31, a resident of Ambedkar Nagar, Uttar Pradesh, is a member of the Dalit community.  After this incident, the afflicted family was exiled from their village.

Ranjit resides at his elder sister’s house in Badlapur, a hundred kilometres away from his original home. “We are a big family, we cannot stay at a relative’s house. Therefore, my father, my mother and younger brother are living with different relatives. It will not burden the relatives,” he informed Mojo Story.

He recalls that this was not the first time he had been attacked for his beliefs while at home. Ex-pradhan Harkesh Singh had filed a complaint against his family at the Bhiti Police Station on Christmas day accusing them of forcible conversion. On the basis of Singh’s complaint, police constables took him to the station, insulted and interrogated Ranjit.

Ranjit was not part of an isolated incident. As per a joint report, “Christians under attack in India,”’ by United Against Hate Association for Protection of Civil Rights and United Christian Forum (UCF), 305 violent incidents were reported on the UCF toll-free helpline number 1-800-208-4545, which was established in 2015.

The purpose was to assist people in distress, particularly those who are unaware of the law of the land and the system, by directing them to legal remedies and contacting public authorities. Almost 70 incidents were reported in just September 2021, 50 in August, and 37 in January. 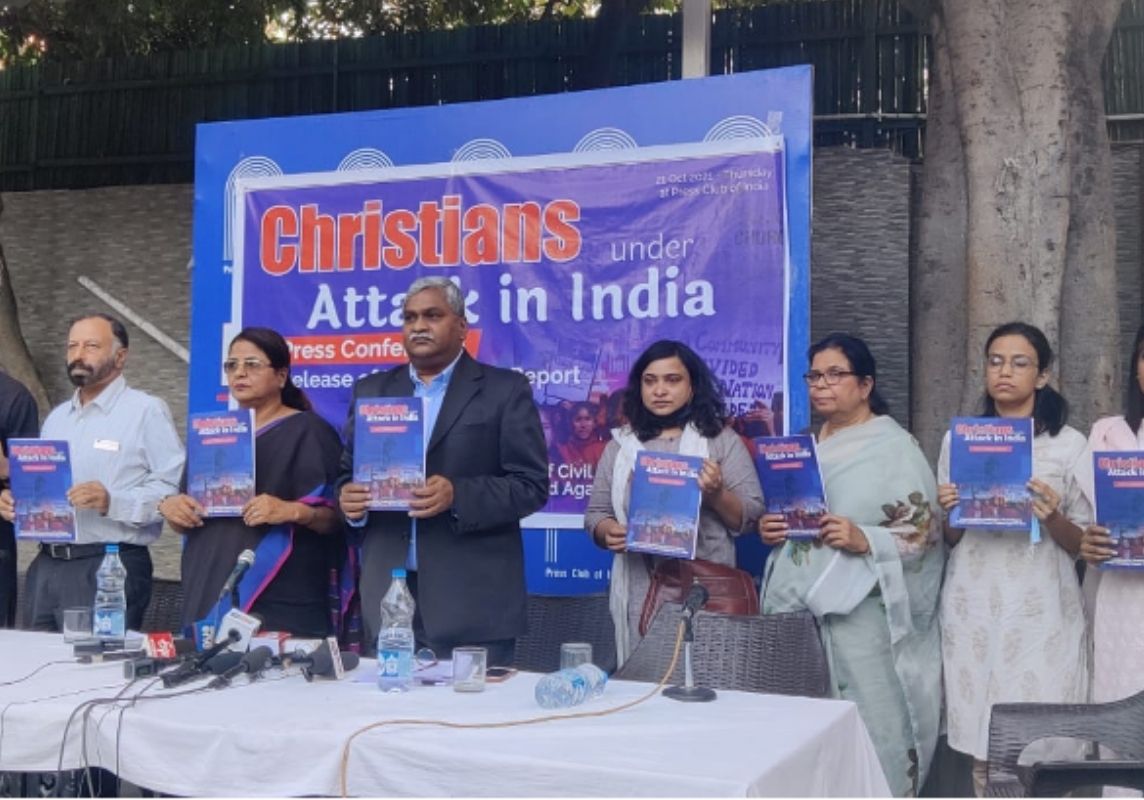 “The Prime Minister said Sabka Sath Sabka Vikas and Sabka Vishwas but the national leadership is not acting on these national and state-level fanatic groups, which are mushrooming rapidly in other states,” Shibhu says, “Most of the time attackers have defective arguments, they say that Jesus videsh ka bhagwan hai aur hamare desi bhagwan hai (Our god is indigenous and Jesus is a foreign God). Members of vigilante groups also claim that Jesus is from Europe or America, despite the fact that Jesus was born in Israel.”

“In most of the cases, the police were also under pressure from these extremist organisations,” Shibhu explained. As a result, he adds that they either do not take any action against attackers, rather, on the contrary, launch a case against pastors and victims.

Vishwa Hindu Parishad (VHP), a right-wing Hindu organisation, in a press release said, “The Vishwa Hindu Parishad had decided to launch a countrywide campaign against unlawful conversion by a section of missionaries and Muslim clerics and to expose their widespread and aggressive conspiracies.” The press release demanded that those from the Scheduled Tribe communities who have converted to Christianity should be denied constitutional benefits.

Vinod Bansal, National Spokesperson of Vishwa Hindu Parishad told us, “If Scheduled Caste people did not receive constitutional benefits after conversion, then why should not the same law apply to the Scheduled Tribes.”

Mojo Story asked him for his opinion on Rameshwar Sharma, a Bhartiya Janta Party legislator, who had said, “Chadar Mukt, Father Mukt Bharat.”  Bansal promptly replied, “We endorsed this comment. Ye desh Chadar mukt aur Father mukt hona chaiye. Our nation should be free from Jihadis and disguised Fathers, who are attacking our cultural and religious values.” Using the term, “Crypto-Christians”, he explained that, in India, many converted to Christianity without changing their surname.”

According to the VHP, these people never make it to the official data on forceful religious conversion. However, there has never been a record of such in the first place in the official census.

Workers from the right-wing Bajrang Dal, accompanied by hundreds of locals, were spotted barging into a Madhya Pradesh Convent school and flinging stones at the facility on December 6, saying that the Christian Missionary institution was converting pupils to Christianity. The incident occurred when Class 12 students were sitting for a mathematics exam. On the question of this attack on St. Joseph School, in Ganj Basoda Vidisha district in Madhya Pradesh, Bansal flatly denied involvement from VHP members adding that they only protested outside school against conversion. He later described the attack as propaganda by Christian Missionaries.

Social Media Played an Important Role in boasting about these violence 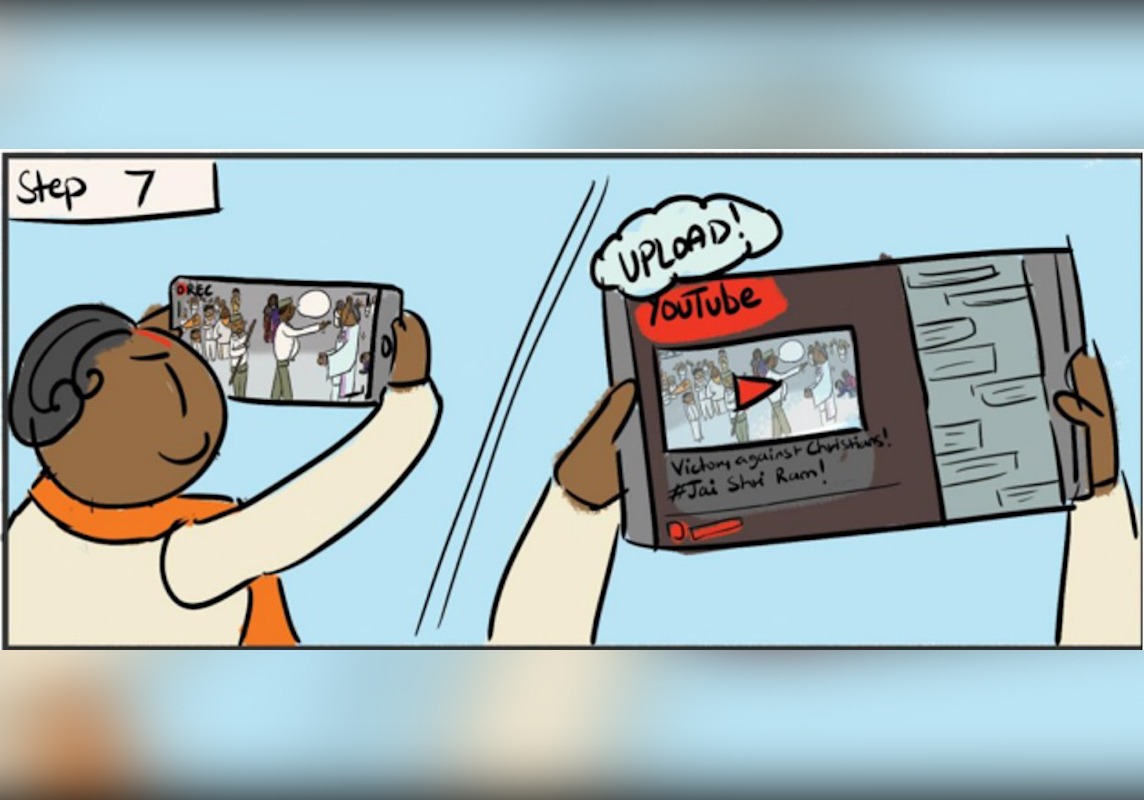 In December 2021, People’s Union for Civil Liberty, a human rights organisation released a report  “Criminalising the practice of Faith”  in which they explained the modus operandi of these attacks in a stepwise manner. The report specifies a Step 7 describing, “All throughout someone or the other from the mob records the violent attack on the prayer meeting on their phone, this recording is then circulated both as a victory against Christian forces’ and as a tool to instil fear in all those who dare to practise their fundamental right to freedom of religion.” (Sic)

“Step 7 is a critical step in an attacker’s modus operandi,” Manvi Atri, a lawyer and PUCL member, said, “by creating a video and sharing it on social media, they are sending a message to the general public that you cannot practise your faith in your own space if you are a member of a minority group. They brag about how the government allows them to operate with impunity. This is a celebration for them.”

The report also mentioned the post-violence effects on victims. In such circumstances, the psychological pressure broke the victims. According to the paper, this has an impact on their livelihood, food security, and general well-being.

“We sometimes just see attacks on Christians, but we don’t always know how these attacks affected the victims’ daily lives. We spoke with these people who were afflicted. After the attack, authorities forced the property owners to evacuate the place of worship, forcing a pastor to relocate his prayer palace 44 kilometres away. In similar incidents, police detained a tribal labourer and held him at the station for a whole day without cause. Because of this, he lost his work, and it is now tough for him to make a living. Women and children are the most vulnerable to such attacks because they are unable to psychologically absorb them,” Manvi clarifies.

The mainstream media’s role in spreading hatred was also discussed in the report. The findings decipher that media coverage is a mix of spurious claims, misleading assertions, outright lies, one-sided reporting, and a bias in favour of “Hindutva” forces and against Christianity.

“The reports are mostly sensationalist in nature, frequently employing the device of sting operations’ as if someone had been found doing something unlawful, whereas constitutionally, the activities are not only legal but also an exercise of fundamental rights,” noted PUCL report.

“A TV channel called “Dighvijay 24×7 news” broadcasts a show called “Conversion is Scarier Than Terrorism,”’ Manvi says. The channel as per the lawyer openly presents a toolkit to their viewers on this show, warning them that if they see anything resembling conversion, they should take immediate action. The show asks its viewers to call the cops and make a complaint under section 295 of the IPC.

“They use fictitious figures to incite hostility against Christians on their networks,” Manvi said. “Our group, Campaign Against Hate Speech, had submitted 17 complaints against them, but no action was taken.”

The Karnataka Freedom of Religion Bill 2021, often known as the anti-conversion bill, was recently passed by the Karnataka government. It makes it illegal to convert from one religion to another through deception, coercion, fraud, allurement, or marriage. The laws are in force in nine other states: Arunachal Pradesh, Odisha, Madhya Pradesh, Chhattisgarh, Gujarat, Himachal Pradesh, Tamil Nadu, Jharkhand, and Uttarakhand.