Policeman Barges Into A Transgender Shelter, Beats Residents, Alleges Abduction Of His Son 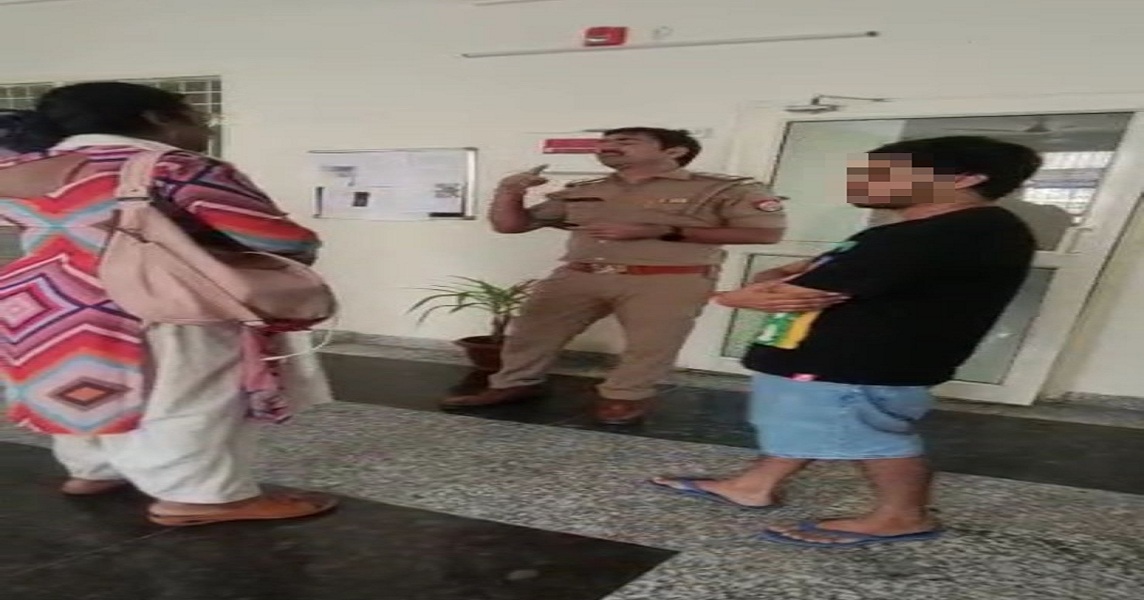 Away from the city’s commotion, in a pretty narrow lane lies a two-story shelter home in a safe corner away from the societal imbalance. A home for transmen who have experienced trauma in the past and come from dysfunctional families to find peace.

Even living in this safe haven didn’t come easy for the residents. Gautam, a 24-year-old man who identifies himself as a transman and uses he/him as a pronoun, found this home after struggling for 7 long months in a metropolitan city like Gurugram, Haryana. Little did Gautam and the other house members know that finding a home wasn’t the only challenge lying ahead of them.

A deeply shocking case unfolded with the members of the shelter home as they were unpacking and settling in their new house in Gurugram, Haryana. A police officer in his uniform stormed the shelter home and assaulted two trans people, blaming them for “kidnapping” his son who is also a transman, and bringing him there against his will.

The Asra Shelter home in Gurguram’s DLF Phase 3 managed by TWEET Foundation. is a registered NGO run by transmen and transwomen and works closely with various government and private institutions including the Ministry of Social Justice and Empowerment, Government of India for the welfare and empowerment of transgender persons as envisaged under the Constitution of India and the Transgender Persons (Protection of Rights) Act, 2019.

“Barged in, beaten up, and dragged to the police station”

On the 1st of Sept 2022, at around 12.15 pm, a uniformed policeman from UP Police – Mr Krishna Kant Singh Haidergarh-Thana Barabanki, along with his wife and son and two other unidentified men barged into TWEET shelter home and started beating 2 of the two board members Shaman Gupta, age 33 and Gautam Ramachandra, age 24, who both identify as trans-men and have provided support to other transmen.

TWEET Foundation in a statement declared how the neighbours who were otherwise very friendly could not provide any help and support at that moment because of the drastic turn of events.

“Both Shaman and Gautam were beaten mercilessly by the 4 men and forcefully dragged and put into a jeep in broad daylight. Since the said policeman Krishna Kant Singh was in uniform, the nearby neighbours and other people outside could not stop him from illegally beating and dragging our team members into their jeep”, the foundation wrote in a statement.

Upon interviewing Gautam, one of the victims who was beaten up by the man in uniform told Mojo Story that in addition to being brutally abused in front of the other residents of the shelter house and neighbours, their phones had also been taken.

“We tried to record everything in the camera but as we started to record, they snatched our phones and started beating us again. We were not even allowed to contact the nearest police station, our lawyer, or our other board members”

Another transman, Shaman who was beaten alongside Gautam is currently down with fever and is too unwell to talk to the media. He was the first person who allegedly came out hearing the commotion in the hall, as he tried to take out his phone to record the harassment, he was dragged in by one of the other uninformed officers from the Krishnakant’s family group.

“Both team members were continuously beaten in the jeep and threatened to reveal the location of the transgender man, son of Krishna Kant Singh who was residing at our shelter home after fleeing his home due to physical and mental violence and unacceptance of his gender identity”, confirmed another member in the shelter home.

“Transphobic comments were passed on to us”

These were some of the transphobic and life-threatening comments that were passed on to Gautam and Shaman while they were being dragged inside the jeep and taken to an unknown location.

“When one of the people shouted to open our clothes that’s where I was numb and started to fear for our lives. They were passing transphobic comments but after a point, they were so out of their mind that they wanted to open up our clothes and check our identity”, said Gautam.

The said police officers of DLF phase-3 police station continued their atrocious actions even when told that the NGO works closely with the Ministry of Social Justice and Empowerment and that it was illegal to withhold them and not allow them to make calls to their lawyers or government officials.

They were only permitted to phone their team member, Abhina Aher, a senior trans rights activist and the founder and board member of TWEET Foundation after one of the team members persuaded these guys that they would ask their team to take their transgender son to the police station.

Physical, Mental Violence, and Unacceptance of his Gender Identity

The son of the above-mentioned police officer, Krishnakant,  a 24-year-old adult, took the decision of leaving the house of his own accord.

In a statement, TWEET also noted that the police officer’s son, a 24-year-old adult, had entered the shelter on his own as a result of “mental and physical violence” from his family, who were unable to accept his gender identification.

The NGO also made public Shyam’s letter written to stay at the shelter house. In it, he claims that his relatives in Lucknow will “either kill me” or “have me married” if he returns there. He continues by saying that he wants a secure residence from which he may “take some legal action.”

This wasn’t the first time the mentioned police officer was harassing Gautam or other transpeople in the shelter home.

“He phoned me earlier as well. He has threatened me and other members as well. But I never took him seriously because his son, our foundation, and the family had talked put in front of the police while he was wanting to stay with us in the shelter home,”

The said Krishan Kant Singh is the father of the transgender man, who is an adult, and previously on 6 August 2022, in front of his parents, the TWEETs team and police officials had already registered his statement at Govindpuri, New Delhi (where TWEETs shelter home was located earlier). After confirming that the said transgender person is an adult and is exercising his wishes, the Govindpuri police refused to intervene and allowed the transgender person to live on his own terms, in accordance with the law. The transgender person had come to the shelter home of his own will and was facing mental and physical violence at home and has recorded the same in written statements and on-video statements. The transgender person also sent a legal notice dated 16th Aug 2022 to his home address via his lawyer regarding the threats that he and the NGO were receiving continuously. However, as per the lawyers, the said legal notice was returned with the reason of ‘address not found. The legal notice was also sent via email to the family member.

The TWEET foundation has filed an FIR against the said UP Policeman and the family members for physically attacking the transmen under sections of IPC.

The Gurgram police made a remark it wasn’t the case of kidnapping how the father of the transperson made it look. The son of the mentioned policeman came to the shelter home of his own free will and hence no sign of forceful keeping or kidnapping. 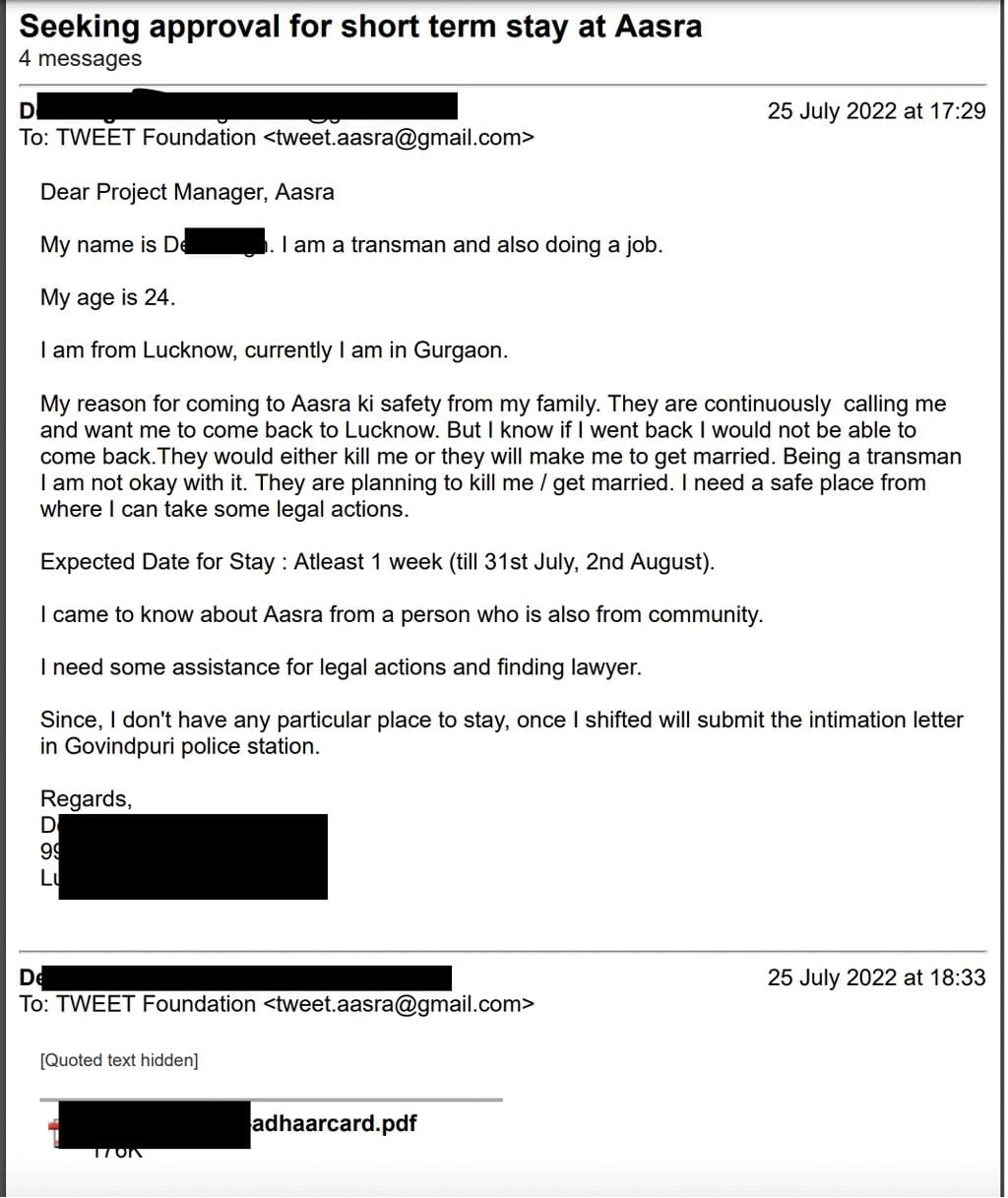 Letter To TWEET Foundation Sent By UP Cop's Son

“I’m Your Husband, You Owe me Your Body”: Marital Rape Survivors on What Their Rapists Told Them
The Heinous Murder that Haunts the Country: Who Are the Killers?