Activists Arrested In Delhi While Protesting Against Agnipath

After being denied bail and then transported to Tihar jail for a day on judicial detention, Anupam, the President of Yuva Halla Bol, said, “the administration is terrified of young people. They won’t be able to stand up to our symbolic protests.” 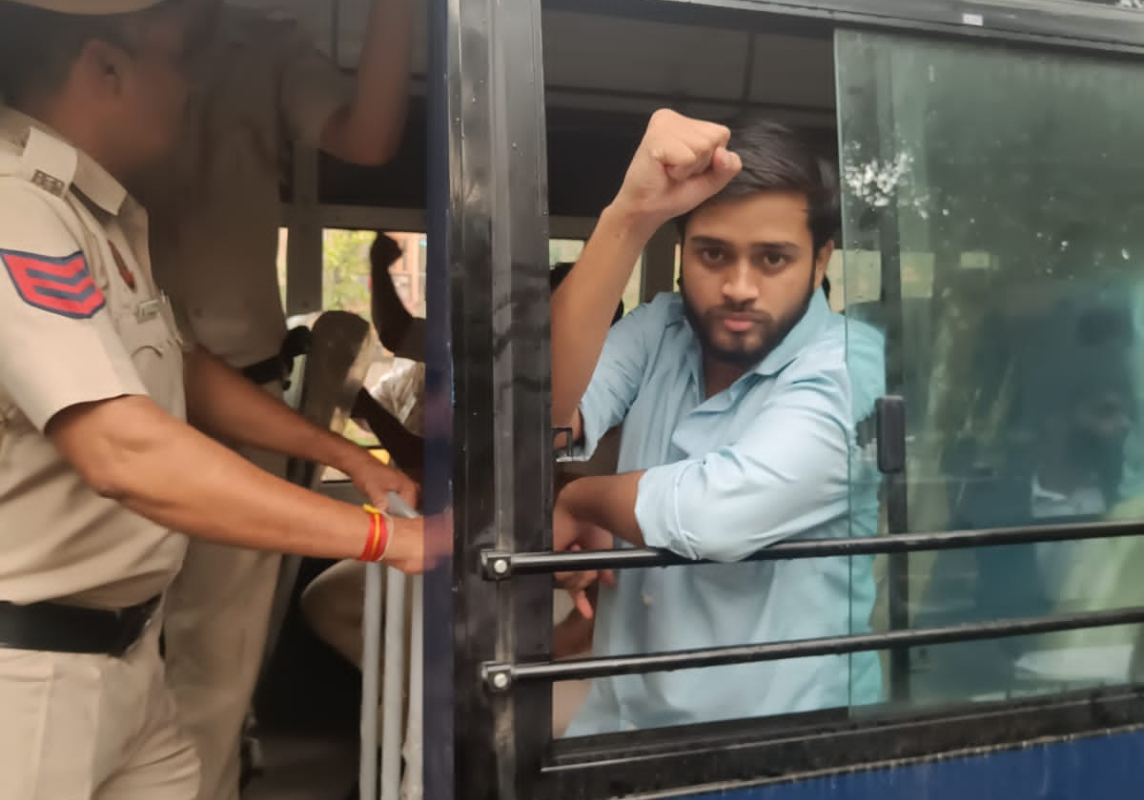 Rishav Ranjan, National General Secretary of Yuva Halla Bol, as the protestors were being taken to Tihar Jail.

Protests over the Centre’s radical military recruitment program Agnipath continued in different parts of the country for the third day. The Modi government announced a two-year relaxation of the higher age limit to 23 for the current year’s conscription drive due to “no recruitment in the services during the last two years.”

Large-scale protests in Bihar, Uttar Pradesh, Haryana, and Uttarakhand have made national headlines. But, the national capital has remained hushed, with no protests permitted in Delhi.

Yuva Halla Bol, a youth movement that advocates youth unemployment, privatisation, and education, had called for a symbolic gesture on Friday at Connaught Place. The purpose is to show solidarity with students who committed suicide after the announcement of the new government scheme.

The Delhi police had taken cognizance and cleared the popular market prior to the protests, telling members of the organisation that no protests would take place. While no compromise was reached, the police reacted and detained several demonstrators with 11 members of the Youth Movement taken to Mandir Marg Police Station early Friday evening and booked under Sections 107 and 151 of the Code of Criminal Procedure.

Those detained were denied food, water, or the ability to contact their loved ones for over four hours, while other members of the group were not permitted to enter the premises.

Prashant Kamal, National General Secretary of Yuva Halla Bol, in a video uploaded while in detention, claimed that they were not being released, “despite the fact that we did not gather in large numbers or do any damage to public property, we are held in custody. Our members were in frequent contact with officials, and we followed their orders, but it was all in vain; we are now hares, incarcerated illegally.”

Lawyers representing the protestors were also not prohibited from entering the Mandir Marg Police Station, where their clients were being held. The lawyers were instead taken to Connaught Place Police Station to speak with the Investigating Officer, “at first, they claimed there was no senior official inside the station and that standing there was pointless,” Pranjal, one of the lawyers, said.

The other members of the movement were told that the inmates would be released on bail the next morning, but the following evening, all 11 members were sent to Tihar Jail for one day of judicial custody.

Upon contacting the Connaught Place Police Station, where the lawyers were earlier sent to, Mojo’s story was told that the detainees were now being arrested post their medical examination.

“Why are we being sent to Tihar for a nonviolent symbolic gesture,” Rishav, a detained protester, remarked as he walked out of the courtroom, raising his fist to the chant “laden jeetenge.” Those in judicial custody have chosen to go on a hunger strike until they are released.

Goa Elections: Rough Tides Rock the Boats of Fishing Community in Goa
Delhi Is Witnessing A Dengue Surge. This is Why.