As Political Parties in Manipur Vow to Repeal AFSPA, Survivors Call it a ‘Hollow’ Poll Plank

It was the fourth day of November 2008. My husband, Nongmaithem Michael Singh, was visiting his friend’s house, which was close to ours. While my husband was there, he received a call from someone pretending to be his friend and asked him to come out of his house. As he came out, he was picked up by security forces. My husband rang me and told me that he has been apprehended and I must visit the Imphal Superintendent of Police (SP) immediately to secure his release as the phone disconnected.

I called him back. Somebody picked up his call and said he was in the washroom, to which I responded that I am his wife and I need to immediately talk to my husband. The person on the phone said once he is back from the washroom, he would make him talk to me. I kept trying his number after that but the phone was switched off.

My sister-in-law was a relative of the SP, so I told her the matter. The SP was out of the station then and his wife went to the police station to inquire about my husband’s whereabouts but we couldn’t find anything. By 9 at night, I saw the news of my husband’s death. The news said, there was an encounter between suspected insurgents and the security forces where the ‘suspected’ who happened to be my husband was killed. The Police FIR said the same.

We did a sit-in protest the next day and submitted a memorandum to then Chief Minister Okram  Ibobi and the Director-General of Police (DGP). With the help of human rights activists and lawyers, I took the matter to court.

Neena remembers even the finest of details of how things unfolded that day. Hers is one of the few cases of extrajudicial killings in the barge of Armed Forces Special Powers Act, 1958 (AFSPA) that could actually be proven in the law of court. AFSPA is a draconian law that gives security forces sweeping powers to search, arrest, and open fire if they deem it necessary for “the maintenance of public order.” However, it certainly does not authorize fake encounters or other kinds of atrocities but the act that had been promulgated as a temporary measure in ‘disturbed areas’ continues to be operative.

“There are numerous cases of fake encounters and alleged extrajudicial killings which could not reach a logical conclusion because of numerous reasons. In my case, persuading the witnesses to make a statement was a tough task. A shopkeeper finally said he had seen a police vehicle with a person in it, passing by. The villagers from the place where my husband was shot, had heard only a few gunshots and their testimonies in the court helped the case reach a conclusion,” recalls Neena, “I struggled for compensation even when the court ordered it.”

Manipur Police alleged Nongmaithem Michael as a suspected militant of Kangleipak Communist Party-Military Council (KCP-MC). According to the First Information Report (FIR) by Lamsang Police Station as accessed by MoJo, “..that the police received a reliable information of the presence of some suspected KCP-MC who was in the area with a view to carrying out prejudicial activities like extortion from the general public by threatening them with arms, bombs etc.”

While the police claimed that Nongmaithem was killed in ‘retaliation’ firing and encounter lasted for around five minutes, the order by the District and Sessions court clearly stated: “In the result, I have decided that the husband of the petitioner, Nongmaithem Michael Singh, was killed by the personnel of Manipur Police Commando, Imphal West on 04-11-2008 at about 4.45 pm at Yenkaobung, Kameng and not from the exchange of firing or encounter between the husband of petitioner and personnel of Manipur Police Commandos, Imphal West.” The report was further forwarded to the High Court, where the court ordered a compensation amount of five lakhs to the victim’s wife, Neena. 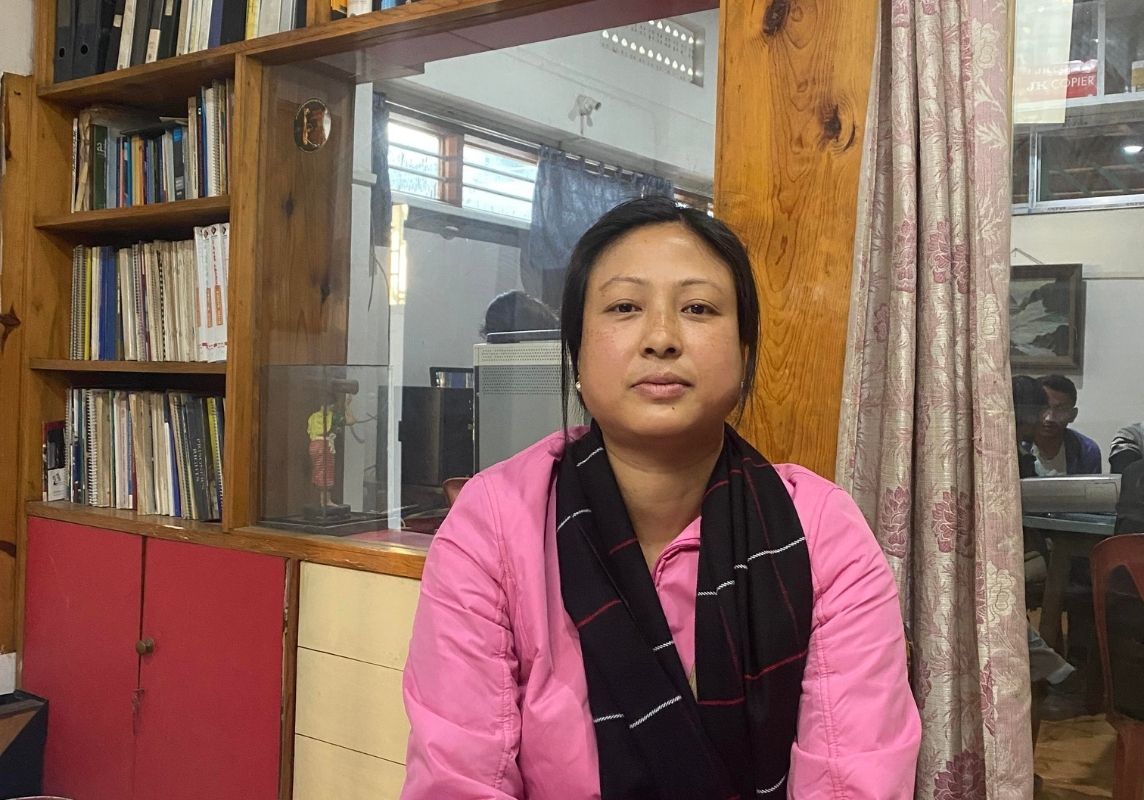 As Neena shares her ordeal with MoJo, she also says her battle is not over “until the perpetrators are sentenced capital punishment and AFSPA is repealed.”

“They are doing it only to win elections. It is vote bank politics. If they actually were concerned about the human rights abuses and extrajudicial killings, who has stopped them from repealing it?” asks Neena.

“I have no hopes either. All these political parties are fooling us. Every election they start making a case against AFSPA but do not take substantial action and negotiate with the central government,” says Renubala Takhelambam, who lost her husband Mung Hangzo in a fake encounter in the year 2007.

“My husband was killed in a fake encounter by Manipur Police Commando in broad daylight. I received compensation after a magisterial enquiry but the accused wasn’t punished. Is that justice?” asks Renubala, adding, “Instead the person accused of fake encounter of my husband was promoted to a senior rank equivalent to Superintendent of Police.”

Renubala’s comment on killings and its relation with promotions was well established in senior journalist and author Kishalay Bhattacharjee’s book, “Blood on My Hands: Confessions of Staged Encounters,” through confessions of an army officer split wide open the anatomy of extra-judicial killings and staged encounters in India’s northeast detailing how awards and citations were linked to the body count. 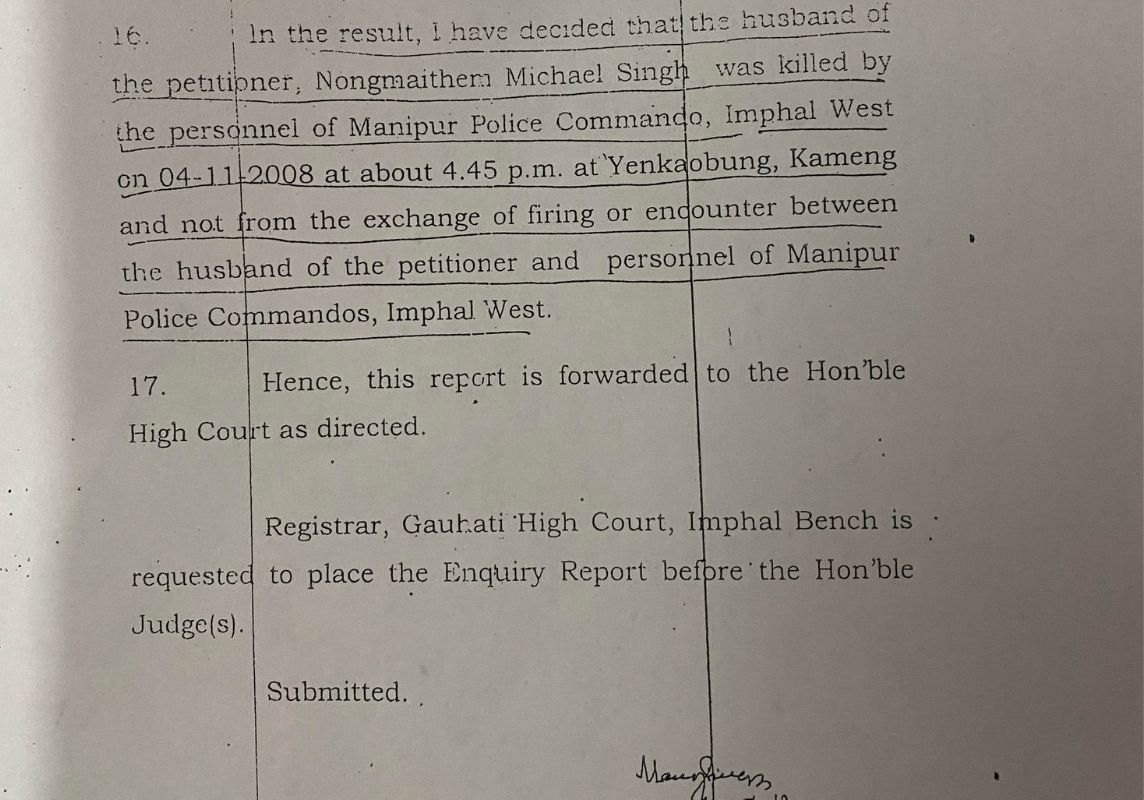 Meanwhile, as the day of polls inch closer in Manipur, all the political parties including BJP are calling for repeal of the draconian law AFSPA. However, for families who have lost their near and dear ones to the ‘unaccountable’ law poll promises of repealing AFSPA if voted to power is ‘triggering’ and a ‘hollow poll plank.’

Babloo Loitongbam, a human rights defender based in Manipur recalls,“Prime Minister Modi in his first visit to Manipur in 2014 had said that AFSPA would be repealed.”

“Several cases of misuse of AFSPA have been brought into light by courts and investigative agencies. Courts have even ordered inquiries and compensation to the families of victims. It is high time that the laws which are detrimental to fundamental rights to the general public are still continued in the name of national security,” he added.

In the 2017 judgment of the Supreme Court of India, Extra Judicial Execution Victims Family Association and Human Rights Alert vs Union of India, the court ordered registration of FIRs against many armies and police personnel involved in extrajudicial executions. Earlier, the Supreme Court had also appointed a committee consisting of retired Justice Santosh Hegde as its chairman, and J.M. Lyndoh, former chief election commissioner as a member, to enquire into some of the complaints.

The committee found many of the complaints prima facie correct, after which, petitions were filed by at least 350 army officers in the court seeking the quashing of FIRs which was subsequently rejected by the court. It was a collective attempt by the army officers to stop their persecution for fake encounters. Even the Central Bureau of Investigation (CBI) filed charge sheets in a few cases.

One of the arguments then put forth by the officers was that investigation and persecution would “demoralize” the security forces but the judges argued that there was “no material to support the theory” or that it would actually “demoralize” the forces.

The petition by Extrajudicial Execution Victims Family Association and Human Rights Alert documented 1,528 cases of extrajudicial executions by army and police personnel between 1979 and 2012 in the state of Manipur.

BJP’s national spokesperson Sambit Patra, in a rally at Kshetrigaon, Manipur West, invoked AFSPA and accused the former Congress government of extrajudicial killings, fake encounters, rapes and tortures. “Before 2017, mothers, wives and sisters, feared if their sons, husbands and brothers would return home safe. They were killed in fake encounters and physically harmed. Women of Manipur were assaulted and raped. I ask people here, on whose orders was the then  Director General of Police acting,” said Sambit. 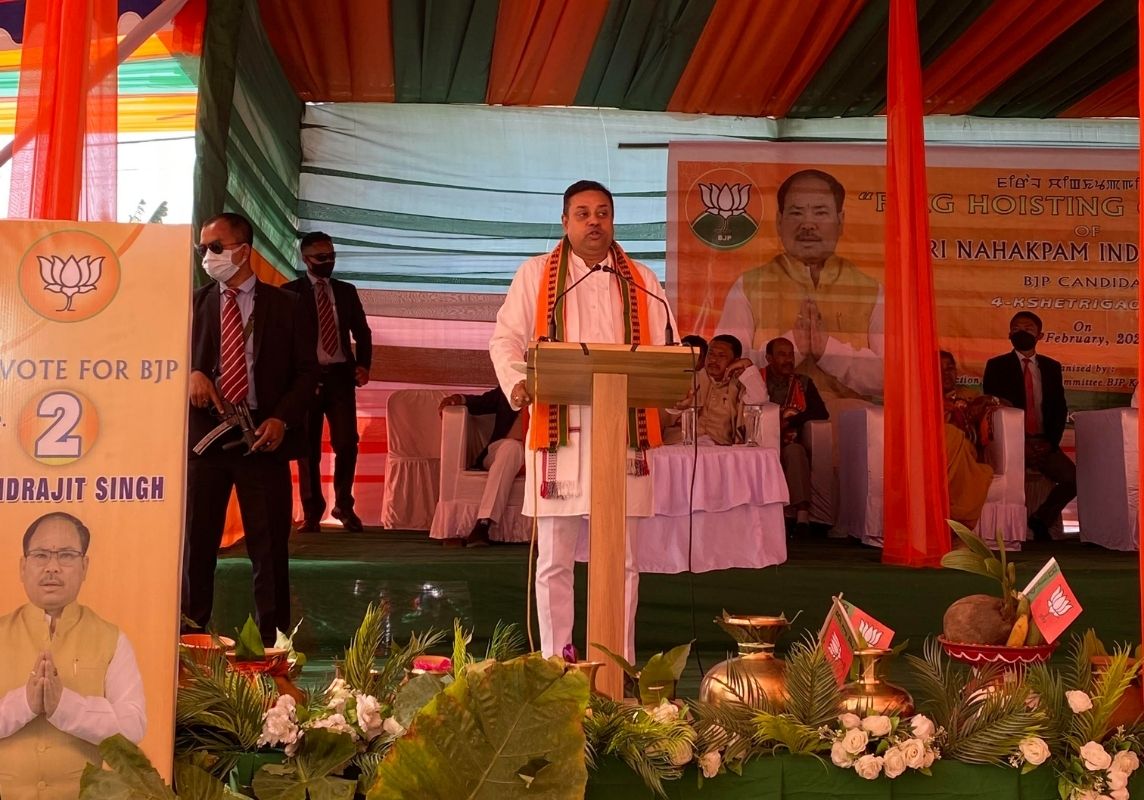 Earlier Manipur CM N Biren Singh has said, “I and people of Manipur want to repeal AFSPA but we also have to be concerned about national security.”

However, BJP has been quite vocal on AFSPA in their election campaign in Manipur, but the party manifesto has no mention of it. In an interview with MoJo,  BJP State President, A Sharda Devi, said, “Though AFSPA is not mentioned in the manifesto BJP is committed to repeal that.”

“NPP is committed to repeal AFSPA. That is our party’s first agenda on our manifesto,” Conrad Sangma, National People’s Party President and Meghalaya CM told MoJo, “While I was part of National Democratic Alliance (NDA), I had raised the issue of AFSPA with the Home Minister Amit Shah. He kept saying ‘dekhenge’ (will see).”

As the issue of AFSPA intensifies during elections and then recedes, human rights activists including Babloo Loitongbam have demanded establishing a “truth commission,” a commission similar to the one in South Africa, where individual testimonies of survivors or their families must be documented for historical purposes. “There should be a public apology and acceptance that yes, a criminal act of violence was unleashed over Manipur, it could help us in confidence building,” Babloo tells Mojo.

Delhi Is Witnessing A Dengue Surge. This is Why.
This Was Do or Die For Me: UPTET Aspirant After Exam Got Cancelled Due To Paper Leak