Anganwadi Workers Been Protesting Outside Delhi CM’s Residence. Here’s Why

Thousands of Anganwadi workers have been protesting outside the Vikas Bhawan, just a few kilometres from Chief Minister Arvind Kejriwal’s residence, under the blazing sun. Some sought shade under kikar trees, while others used umbrellas and newspapers. 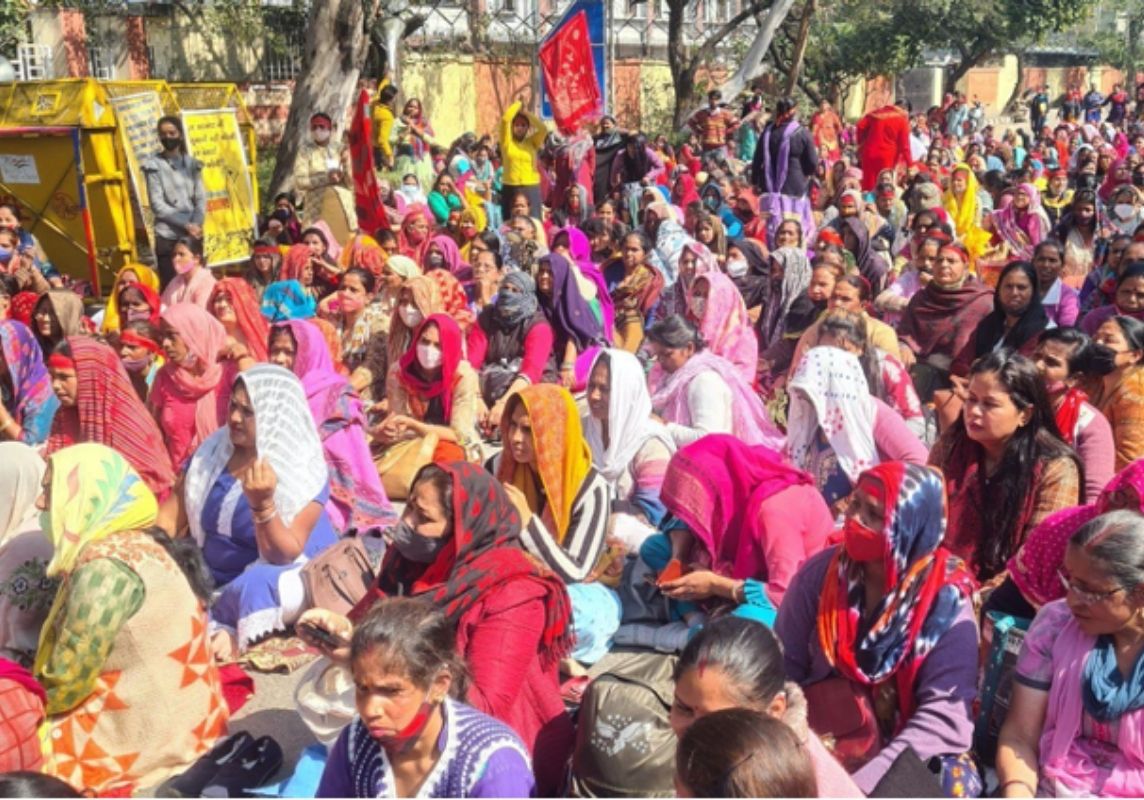 49- year-old Neelam volunteering in the protest was banging utensils at the front of the make-shift stage and declared, “We are the roots of all state departments — during COVID, we collected all the data from the ground for them. They give health insurance for Accredited Social Health Activists (ASHA) but for us there is nothing.”

She claims that her salary from 2017 as a booth level officer is still outstanding. Neelam tells Mojo Story that she has not received any answers even after filling several complaints.

44-year-old Sakra and 53-years-old Baby are single mothers. Sakra lives with her three sons at Shri Ram Colony, Sonia Vihar, “My husband died at a very young age, after that I was the sole bread earner in my family. My eldest son is working as a labourer, while others live with relatives for better education.”

Sakra and Baby are Anganwadi helpers, their prime work is to clean the centre, serve meals to the kids and do door-to-door vaccination for infants. Currently, helpers are paid a mere Rs 4,839 as an honorarium, which is Rs 161 per day, significantly lesser than the minimum daily wages as per law. 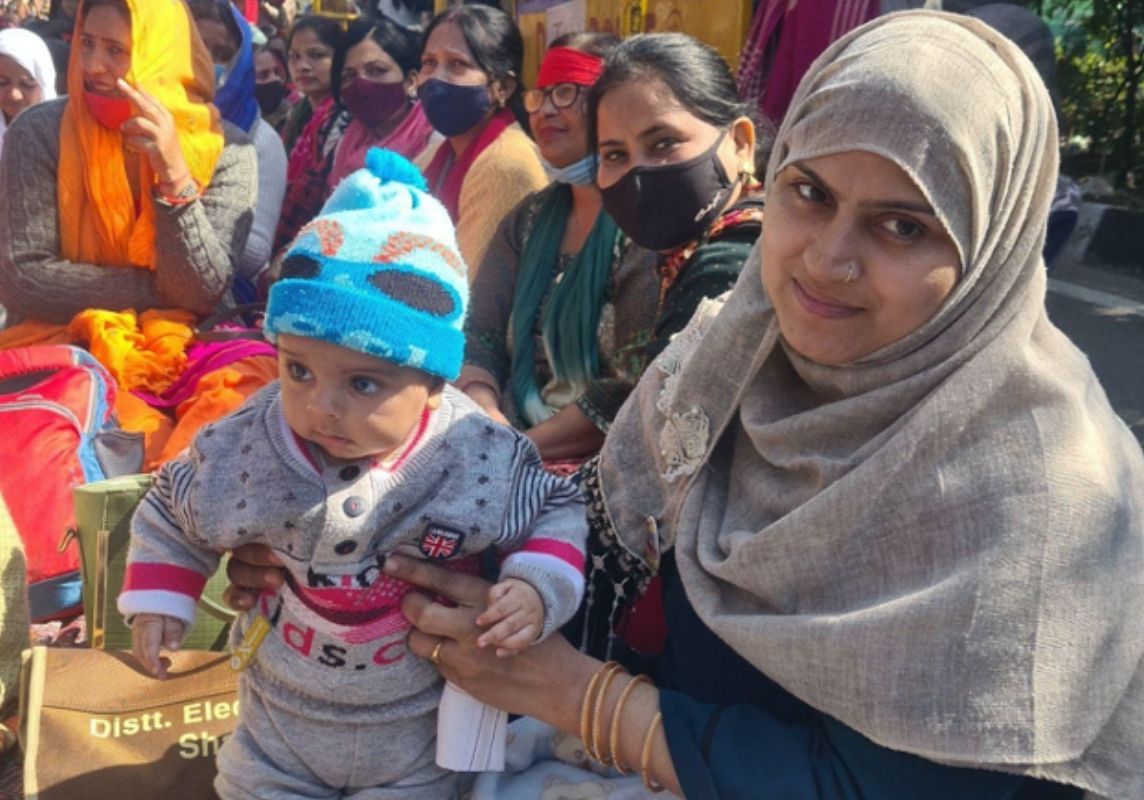 Paso Rani has been a part of the protest for the last two weeks. Rani, who has a fractured hand, informed Mojo Story that she is fifty per cent differently-abled. She describes how living in a rented house on Tank road in Karol Bagh with her husband is financially challenging, “My husband worked in a textile factory, he earned a meagre amount of Rs 8,000. In current inflation, our salary is mostly spent on the daily expenses, we have zero savings. How can we think about the future of our kid?” Paso told us that she brings lunch daily to share it with her colleagues. With a warm smile on her face, she says “Today, I brought Aloo gobi.”

The government’s Integrated Child Development Program, which began in 1975, employs Anganwadi employees for assistance. Their major responsibility is to provide primary healthcare, immunisation, food, and preschool education to children under the age of six. They also look after the mothers’ general healthcare, check-ups, and medical referrals.

The workers might also be assigned to election duty to aid election officials during the voting process. They played a critical role over the pandemic – assisting healthcare workers in local Covid centres – with the government declaring them frontline workers.

Every morning, thousands of Anganwadi workers throng to the Vikas Bhawan with their tiffin packed. Most of them travel from public transport while some travel with private vehicles spending hundreds of rupees to come to the protest site.

Jaspreet Kaur Aggarwal, an Anganwadi worker from the Gautam Vihar project shouted, “I had spent Rs 1300 in my conveyance to receive my amount of Rs 5,000. First, they gave us a very low amount as our salary which is not paid to us on time. We have not received our salary for January and February. Now tell me how we can run our house?”

Like Jaspreet, Paso Rani also alleges that Delhi Transport Corporation (DTC) buses refused to take them on board after finding out they are Anganwadi workers. She blames Chief Minister Arvind Kejriwal for this.

Yogesh Swami, the media coordinator of Delhi State Anganwadi Workers and Helpers Union, complained that many women have to defecate in the open because the Delhi Jal Board does not provide water to them. He said yesterday, “Police seized all our posters and flags. On Friday, we organised a Khabardar Rally from Vikas Bhawan to Vidhansabha. The male police manhandled some female Anganwadi workers and they detained our four workers as well.”

The workers are pushing to be recognized as government employees, which will give them access to benefits such as the provident fund, a pension, medical care, and summer and winter vacations.

Each centre — expected to serve a population of 1,000 people — is manned by one worker and one helper. Their labour is considered “honorary” and “not comparable to any employment.” As a result, they are considered volunteers and are eligible for a stipend. Around 22,000 Anganwadi employees and helpers are currently “volunteering” in centres across Delhi.

The Prime Minister had declared in September 2018 that the Centre would raise the honorarium for workers by Rs 1,500 and for assistance by Rs 750. The beneficiaries of this hike, according to the state, are still waiting. 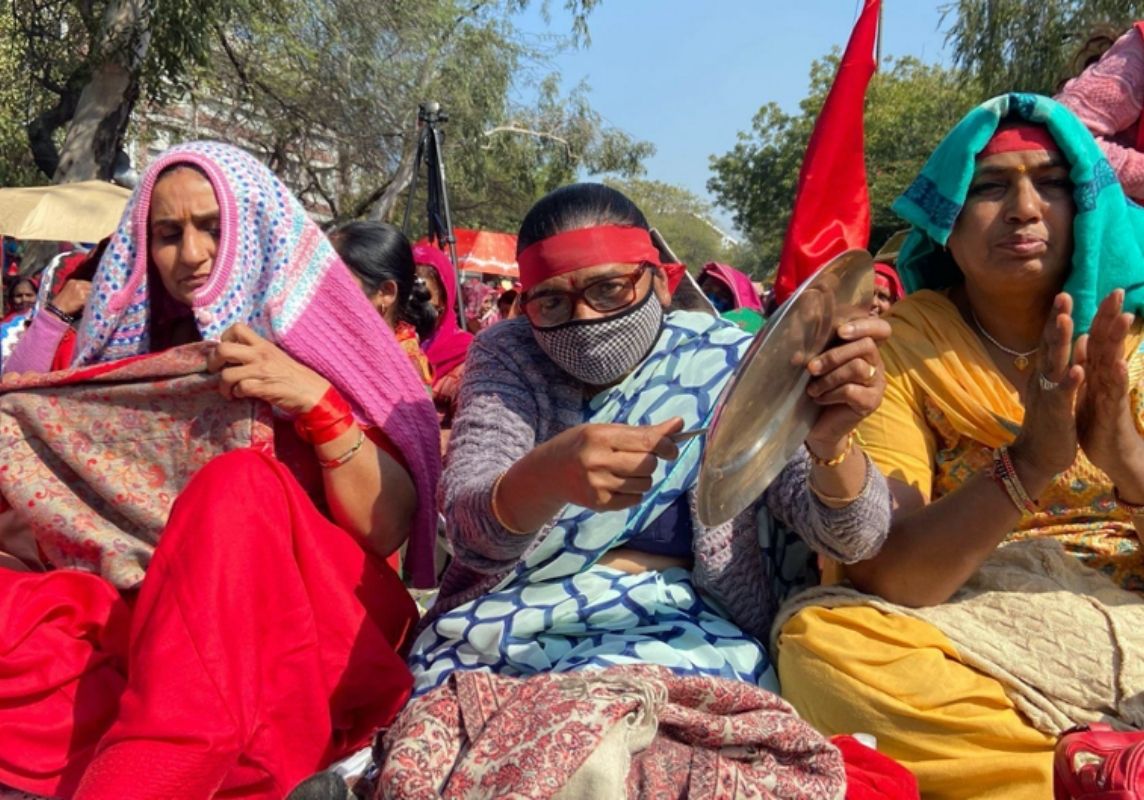 Mundka Fire: Building Had One Exit Route, No NOC, Among 27 Dead
What’s In A Name? The Line Between Development and Political Agendas