(According to Persecution Relief’s report, hate crimes against Christians surged by 60% between 2016 and 2019) 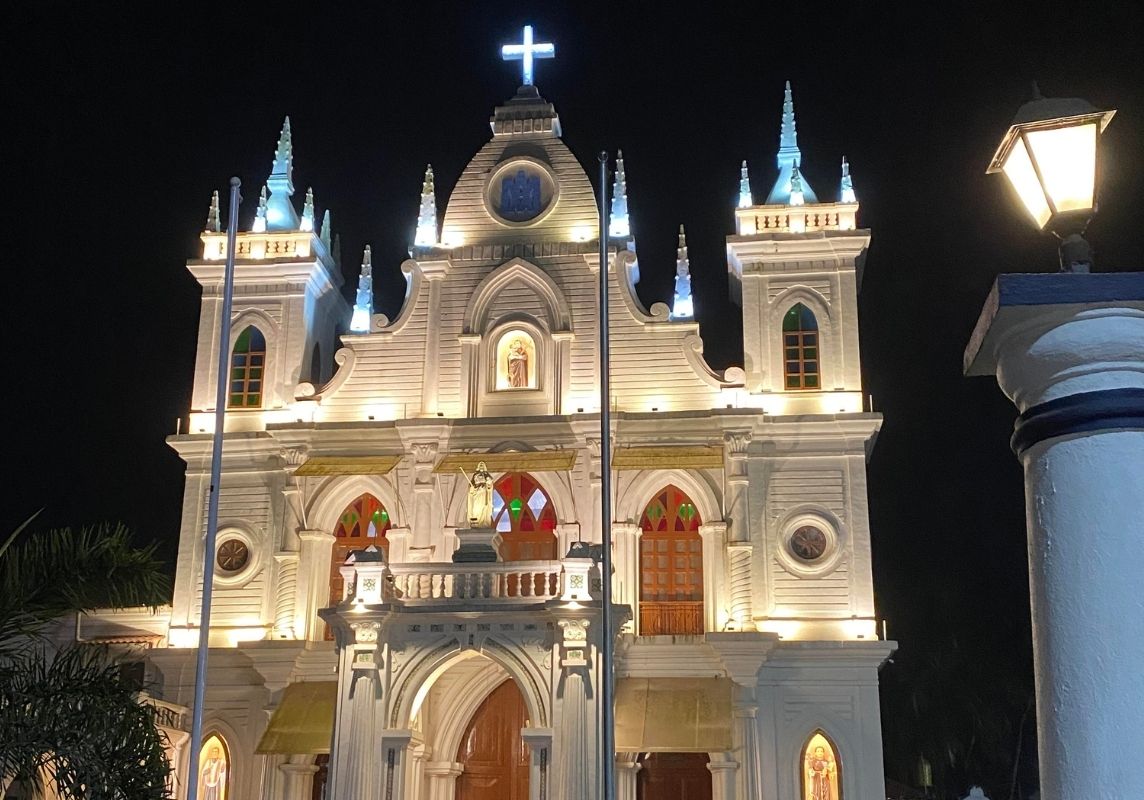 Pramod Sawant is different. He doesn’t understand the sensibilities of Goan politics like Parikkar,” remarked a BJP worker who happened to be a Catholic Christian, campaigning in the Vagator region. He was apparently concerned that Goa CM Pramod Sawant does not make any further statements, like this one, ‘“In the 60th year of Liberation, we have to start rebuilding temples destroyed by the Portuguese. I do not ask for anything. I request you for the strength to preserve Hindu and temple culture and re-establish those temples and culture.”

Statements like these have infuriated the Christian community. The Chief Minister had made that comment while addressing a state government festival in South Goa in December 2021.

Sawant’s announcement was not well received even by his own cadre. Not only did it make several Bharatiya Janata Party (BJP) leaders uncomfortable but also reminded them of the late veteran leader and former CM Manohar Parikkar. “Parikkar knew how to keep relations intact with different factions and communities including the Church,” said the same BJP worker.

While the Church in Goa is not a monolith, at times it does work as a concerted lobby depending on the threat perception and other factors locally. Church itself has many pushes and pulls within. The Church, for instance, has taken stands on the issues of hate crimes and communalism. In 2017, there was a spate of attacks on the cross symbols and a cemetery across South Goa, the Church said that the incidents were done to ​​fan communal passions in the state.

It also commissioned a fact-finding report to get the real picture of the incidents. Even while the Citizenship (Amendment) Act (CAA)  and National Register of Citizens (NRC) protests, the religious institution called out the BJP-led central government’s agenda as ‘divisive’ and ‘discriminatory.’

“The government must immediately and unconditionally revoke both CAA and NRC,” said the Goa Archbishop Filipe Néri Ferrão, in February 2020, when the CAA-NRC protests were in full swing across the country. “The very fact that the CAA uses religion goes against the secular fabric of the country,” he further said.

Commenting on the systematic erosion of constitutional values, the Archbishop then made a case for the community, “Christians in India have always been a peace-loving community and deeply committed to the ideals of justice, liberty, equality and fraternity, enshrined in the Constitution of India.”

Why did the Archbishop have to make a comment particularly about Christians? “I guess he could foresee what was coming next,” said a close aide to the Archbishop.

The Archbishop’s office refused to speak to MoJo saying, “The Archbishop doesn’t want to make any statement before polls as he thinks that would not be a good thing.”

“Even Manohar Parikkar tried teasing the Christian community but he soon realized it could be playing with fire and then he course-corrected,” said Dattaram Palyekar, a former BJP worker who is now campaigning for Aam Aadmi Party (AAP) referring to Parikkar’s first term of Chief Ministership when he attempted to declassify Good Friday as a public holiday in Goa. Soon after, Parikkar organized a Sadbhavna Yatra (Goodwill Tour) where he visited churches and met priests. “It yielded immense support for Parikkar not only in terms of votes but also he developed huge respect among the community,” he added.

It was the equation that Parikkar built with the Church that even when their own priest late Father Conceicao D’Silva made harsh comments against then BJP President Amit Shah, namely calling him a “demon”, the Church admonished its own clergy.

Last year, Archbishop Filipe Neri Ferrao of Goa accused a real estate company linked to a BJP leader of the construction of a bungalow and said that it was detrimental to the preservation of the religious heritage and sanctity of Old Goa.

The relationship between BJP and the Church looks complicated for the upcoming elections. The minority community is quite visibly being attacked by the far-right and it has created a spiral of fear among Christians.

Recently, the country witnessed a series of attacks on members of the Christian community as the right-wing fundamentalists torched effigies of Santa Claus outside missionary-led schools in Agra. In another incident, a mob damaged a Catholic school in central Madhya Pradesh despite school officials asking for police protection before the incident and many other reported incidents.

According to Persecution Relief’s report, a non-profit that tracks violence, hate crimes against Christians surged by 60% between 2016 and 2019 – going from 330 incidents in 2016 to 527 in 2019. According to the organization, there was a clear correlation between the BJP coming to power and an increase in attacks on Christians.

Another joint report by the United Christians Forum, the Association for Civil Rights Protection, and United Against Hate, claimed at least 305 incidents of violence against Christians in only the first nine months of 2021.

The Karnataka Protection of Right to Freedom of Religion Bill, 2021, enacted by the Karnataka Assembly, has aggravated the fears of the Christian community and made them more skeptical of the BJP and many within the community feel, “Hindu fundamentalists backed by the state have arrived now for Christians after Muslims.”

However, Karnataka would be India’s tenth state to have the ‘Freedom of Religion’ kind of legislation. The law prohibits religious conversions unless a person “reconverts to his immediately preceding religion” — a clause that critics claim is intended to allow Hindu fundamentalist groups to convert Muslims and Christians to Hinduism.

When BJP MP Tejasvi Surya made remarks on ‘ghar-wapsi’ (reconversion) of Christians into Hindu fold, it did not go well with many leaders of the Goa BJP. Senior BJP leaders advised ‘caution’ to the party on the matter.

Goa Power Minister Nilesh Cabral went on record to say, “Every citizen has the constitutional right to follow the religion of their choice and politicians have no business telling people what they should do about their faith.”

However, the Church in Goa has its own concerns and limitations. It takes subtle stands in the elections, as in it won’t name the parties or politicians but would indicate its preferences like whom not to vote for. Hence, the hate crimes incidents may impact the chances of BJP in the upcoming assembly polls.

“But it also isn’t the only relationship the Church and BJP share with each other,” says Gilbert Sayos, a non-practicing Christian in South Goa. “It’s difficult for the Church to alienate themselves from the people in power. Church here is not like Church in other parts of the world infamous for taking hardcore political stands. And, even the power here in India is not that democratic that even after criticism they let you run the network of schools and churches,” added Sayos.

Soon before the elections, tremors within BJP could be felt as prominent Christian MLAs – Calangute MLA and Minister for Ports and Waste Management Michael Lobo, Cartolim MLA and former Environment and Forest Minister Alina Saldanha, Vasco MLA Carlos Almeida and Maem MLA Pravin Zantye – one after another have resigned from the party.

Switching allegiances before the polls is not new but it is of importance for the politics of optics. Locally, in the constituencies, it has multiple meanings.

Alina Saldanha, a Catholic Christian and former BJP MLA who recently resigned from the saffron party only to join AAP in conversation with MoJo said, “I am deeply concerned about the hate crimes against the Christian community. Religion is personal and everybody has the right to practise the religion of their choice. Freedom to Religion is a person’s birth right. To prevent or harass someone for their political beliefs is detrimental to the progress of Goa and the country.”

While recalling Parikkar and his approach towards Goan politics, she said, “Parikkar was a hard-working man. He had a heart that beat for Goa. He was open to discussion and would have never allowed projects like doubling of western railway tracks that would destroy heritage goans homes or Sagarmala project that would eat up the fragile Goan ecosystem.” Without directly commenting on the tenure of Pramod Sawant, she said, “I don’t know who are the people guiding the BJP government in Goa. Parikkar would not have allowed anything at the cost of Goa.”

Goans across party lines too believe, “Late Manohar Parrikar had innate ability to understand the complexities and sensibilities of Goan society. It was Parrikar who even at the cost of losing allies and to an extent infuriated RSS, but he ensured Church-run schools grants from state exchequer even if they taught in English medium and inherited Portuguese legacy.”

Pramod Sawant’s statements have highlighted undertone bigotry and hence, Goans recall  Parrikar’s 2012 much hyped ‘social engineering’ of bringing even the minority groups into BJP  fold and that resulted BJP get clear cut majority, 21 out of 40 in 2012 assembly elections.

Nevertheless, Goan politics is also as complex as any other Indian state. According to a study by  Association for Democratic Reforms (ADR), 60% of MLAs have switched sides and changed their political affiliations in the last five years (2017-2022). Congress is the most affected, while BJP has been the beneficiary.

“It has never happened elsewhere in India. A clear reflection of utter disregard to the mandate of voters,” commented Goa state coordinator for ADR Bhasker Assoldekar.

“Everyone here in Goa knows the candidate may switch sides and even the ones who have switched sides just before polls may get back to their old forts. Believe me, people care least about it. Just observe no candidate here makes super critical or personal comments about their former associations or associates no matter what,” said Ritesh Kukde, a transporter based in Calangute, North Goa.

BJP’s Election Weapon: The Extensive Reach of Its IT Cell
Urban Company May Lose the Women That Made It