It is surprisingly hot for a winter morning in Bengaluru. The sun is sharp and the sky is clear, barring the few hundred red flags that dot the cloudless horizon. The unwavering chants of over a thousand people mix in with the traffic sounds to form a curious cacophony for every onlooker. 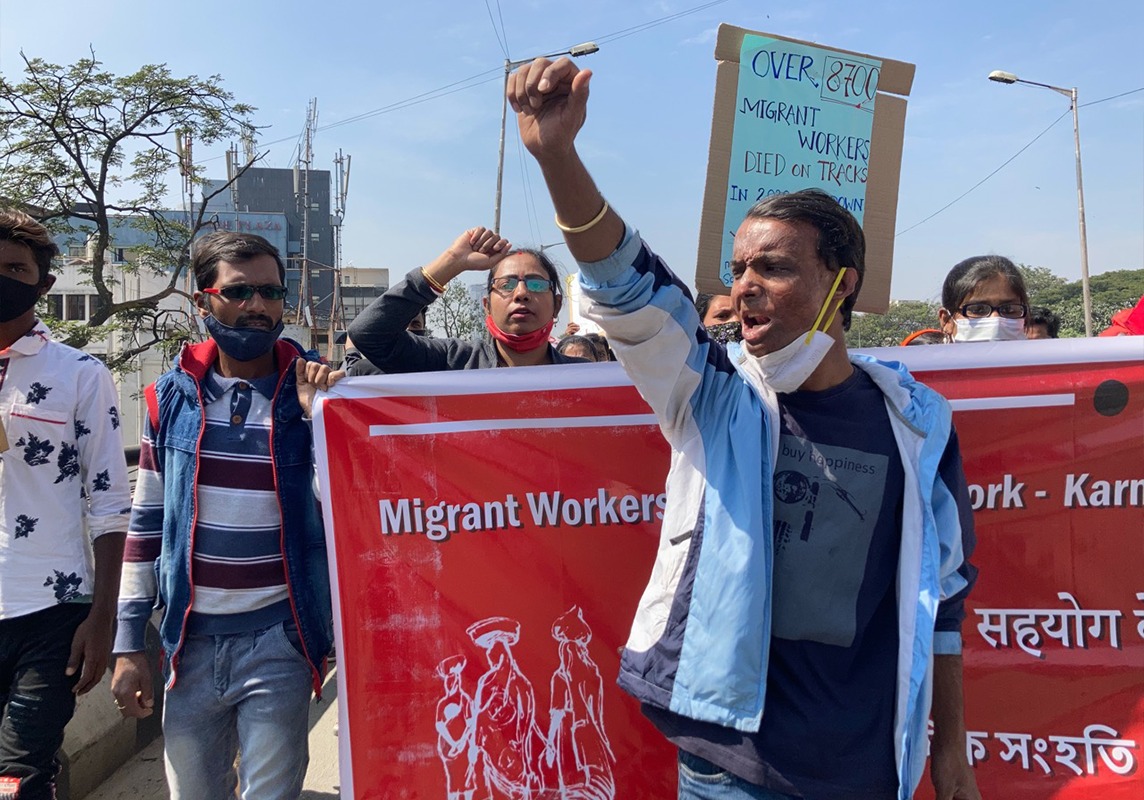 It’s the 19th of December, the day workers from all over the state gathered in the capital city to rally against the new Labour Codes which are to be implemented in the new fiscal year. “During the lockdown, we saw several bills like the NEP and Labour codes being passed along with the illegal arrest of several activists,” said Sourya, a PhD student and member of youth organisation The Collective. “All of this happened when people couldn’t raise our voices against it but now Mazdoor Adhikar Sangarsh Abhiyan (MASA) has mobilised people to fight for their rights,” he added.

MASA is a collective of 15 trade unions and labour rights organisations that were formed in 2016 as an alternative to Central Trade Union Organisations and are present in over 20 Indian states. The new labour codes consolidate 44 labour laws into 4 codes to ensure ‘ease of business and these codes specifically lay out new rules regarding wages, industrial relations, social security and occupational safety, health and working conditions. While these new bills are touted by the government to be labour friendly, MASA and labourers believe otherwise.

“At least now we can fight for our right to permanent employment at the courts, but the new codes will legalise the already abusive contractual system of employing labourers,” said Noor Shridhar, President of Karnataka Jana Shakthi, a labour organisation in the state that is associated with MASA. “For long term employment, we have demanded a permanent employment contract but with these new laws, that won’t be possible,” he added. 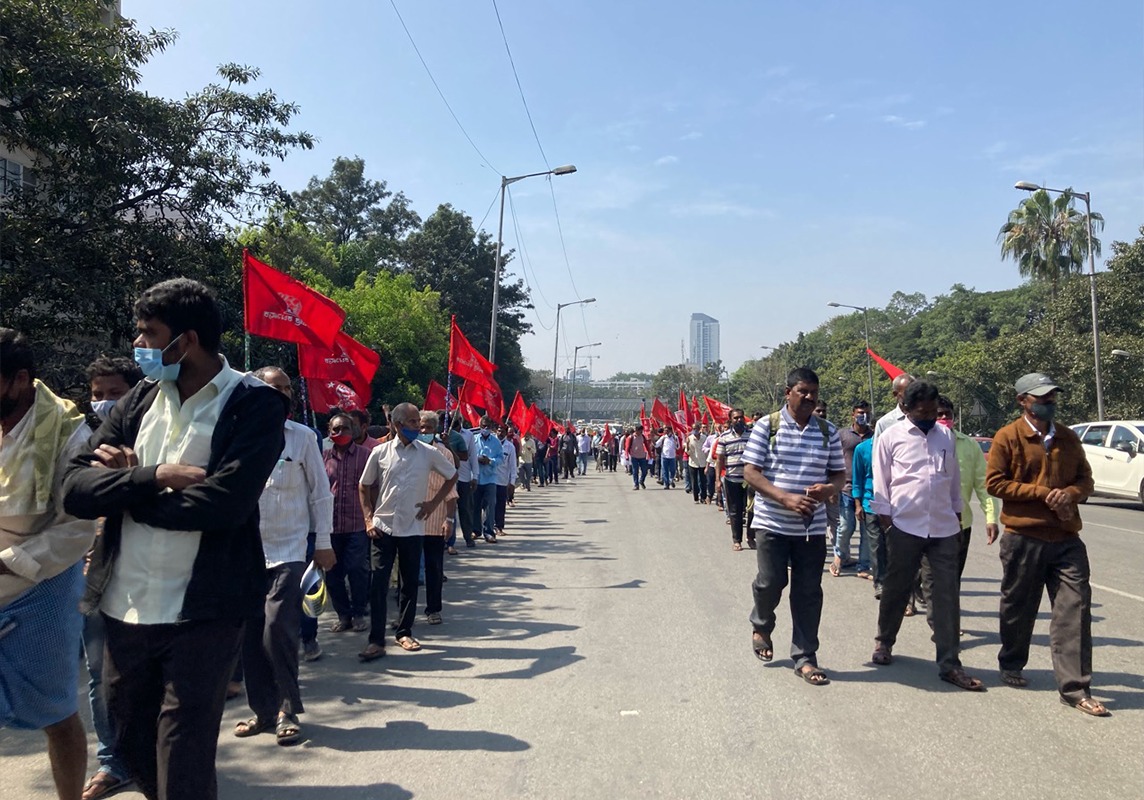 A permanent job in the country comes with employee benefits like PF, bonus, ESI, pensions and stronger job security, while a contractual system recognises workers as part-time employees and provides them with no benefits or job security. “In sectors such as electricity, forest department, medical and even among pourakarmikas, you have many of them who have been working for decades but are still denied basic provisions that permanent employees are given. These codes will only exacerbate this injustice,” asserted Shridhar.

Presently, several labourers are fighting for permanent employment in courts but the implementation of the labour codes will also take away their legal right to fight for better working conditions. “It will turn into a hire-and-fire system,” explained Shridhar while highlighting that there has already been a spate of labour-related protests in the state where workers have been arbitrarily fired or denied/delayed wages.

Understanding the future these codes hold for them, workers from all corners of Karnataka showed up at Bengaluru’s Majestic railway station to walk towards Freedom Park demanding four things. First and most important, that the labour codes be taken back. Workers also demand that the contractual system be scrapped, a minimum wage of Rs. 25,000 per month for a worker with a family unit of three and that there be equal pay for equal work and no wage difference between contractual and permanent workers. 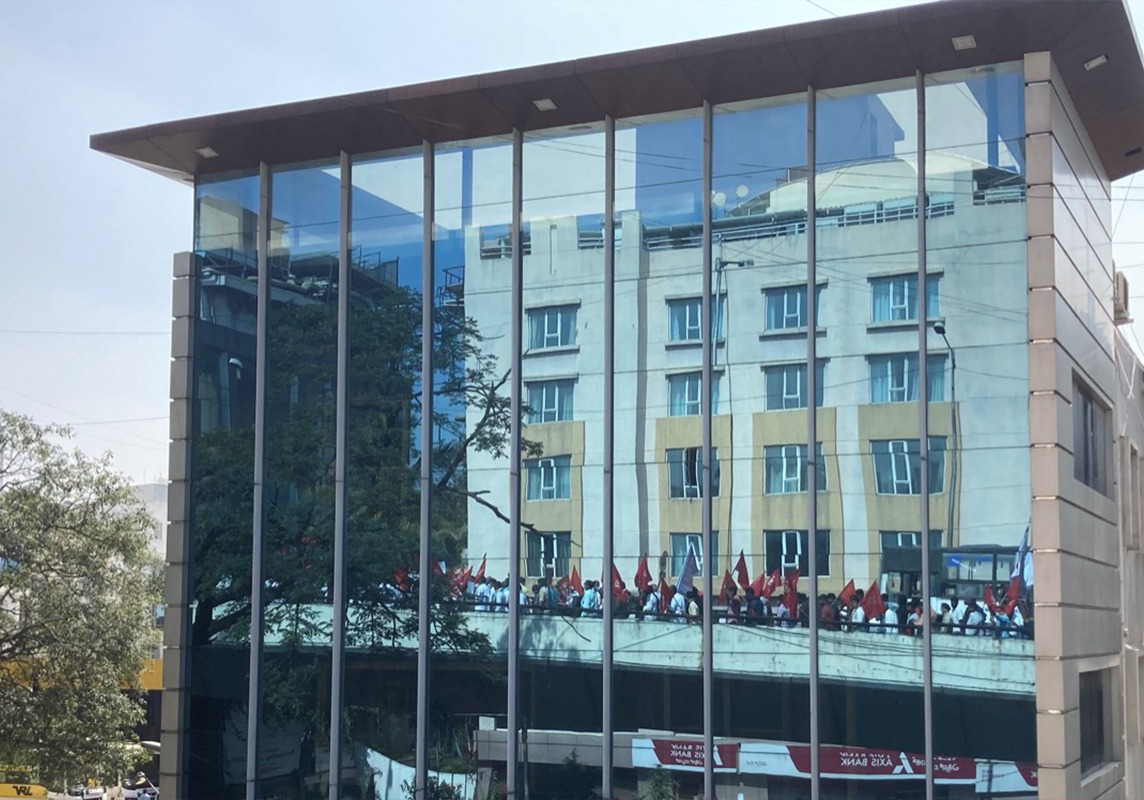 The rally is as diverse as the people in the city. Every few metres, slogans change from English to Kannada to Bengali to Telugu to Tamil and Hindi, with labourers walking barefoot on hot concrete and holding up multilingual signs. According to the 2011 census, 4 out of every 10 Bengalureans are migrants.

The city witnessed 3 large waves of migration from its genesis in the 1500s, historically showing that Bengaluru has always been the city of migrant workers. The irony of labourers fighting for basic needs in a city they built cannot be lost on anyone. The 3km long rally culminates in Freedom Park where workers sit down as labour activists and leaders take to stage to voice out their woes.

Closeby Freedom Park is Bangalore Turf Club where horse races are held on a regular basis. Speaking about how the horses are treated, Comrade Balan says “They spend over Rs. 50,000 on but pay us (labourers) only Rs. 15,000.” Hinting at the recent controversy around giving eggs in midday meals he adds, “For horses they give beetroot, eggs and supplements brought internationally but they don’t even give water to humans.” The crowds roar in applause at this. One among the thousands applauding is Khajita Khatoon, a migrant worker from West Bengal who has been working in Bangalore for the last seven years.

Khatoon works as a domestic worker at eight houses in an apartment complex in Tubrahalli. “We work so hard but aren’t even allowed to take Sundays off. Despite working here for 7 years, we have no proof or documentation that we work here. We don’t have SMART cards, our kids have no Aadhaar cards because they have spent all their lives in Bangalore but this is still not considered their hometown,” she said.

Khatoon explains how during the lockdown her family had no income and she wasn’t allowed to avail rations since she is from West Bengal. “Of the eight houses I work in, only two of them paid me and that too not entirely,” she mentioned. 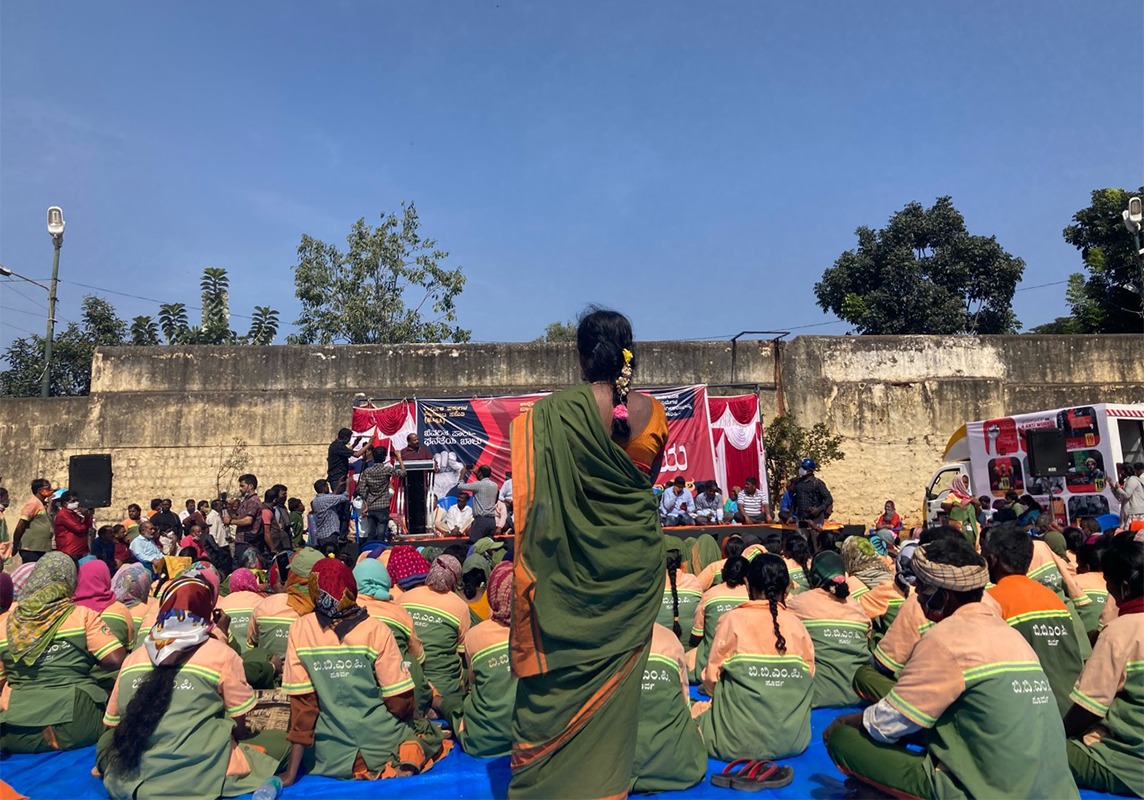 Being an oppressed caste, Bengali Muslim woman in Bangalore, Khatoon’s problems are multifold. “There is still a lot of casteism and Islamophobia here. When people hear my name, some of them stop interacting with me. When I show the police my ID proof, they call me a ‘Bangladeshi’, force us to move out of our huts and ask us to go back,” she explains. “If we (labourers) don’t work, the country will be brought to a standstill, yet we are treated so poorly,” added Khatoon.

She further explained how cops treat Bengali migrant workers in the city as illegal immigrants and demand money from the men. When the men have no money to give, they are often taken to jail and beaten up and detained for a few days before being let go. “They harass us a lot,” said Khatoon while emphasising that not every cop is a bad egg and that she has also been helped by a few of them.

Amidst a large number of workers are also a small section of students and youth who are there to show solidarity. “These issues are not just workers’ issues,” explains Sourya. “These codes allow the Union government to set a floor wage which can be less than the minimum wage agreed upon by states and makes it almost impossible for employees to strike,” he added.

Despite these codes being introduced a few years ago, the pandemic and its ensuing lockdowns made it difficult for people to mobilise. But the recent success of the farmers’ protests has ignited new hope among the labourers. “Even though we would like to, we cannot hold a protest as consistently as our farmer friends,” said Shridhar. He explained how farmers — given the nature of their jobs — can be more flexible about their work hours and timings making it possible for them to sustain long, organised protests. “Labourers don’t have that luxury.

They have superiors and workplaces to show up at and even without the implementation of these laws, labourers often struggle to get paid on time,” Shridhar elucidated. “But if the government refuses to listen to our demands we will make this a bigger issue and collectively take our rallies to Delhi so that our demands fall in the ears of the people governing us.”