Exclusive: “AFSPA Not Mentioned in Manifesto But BJP is Committed to Repeal It,” says BJP Manipur President A Sharda Devi 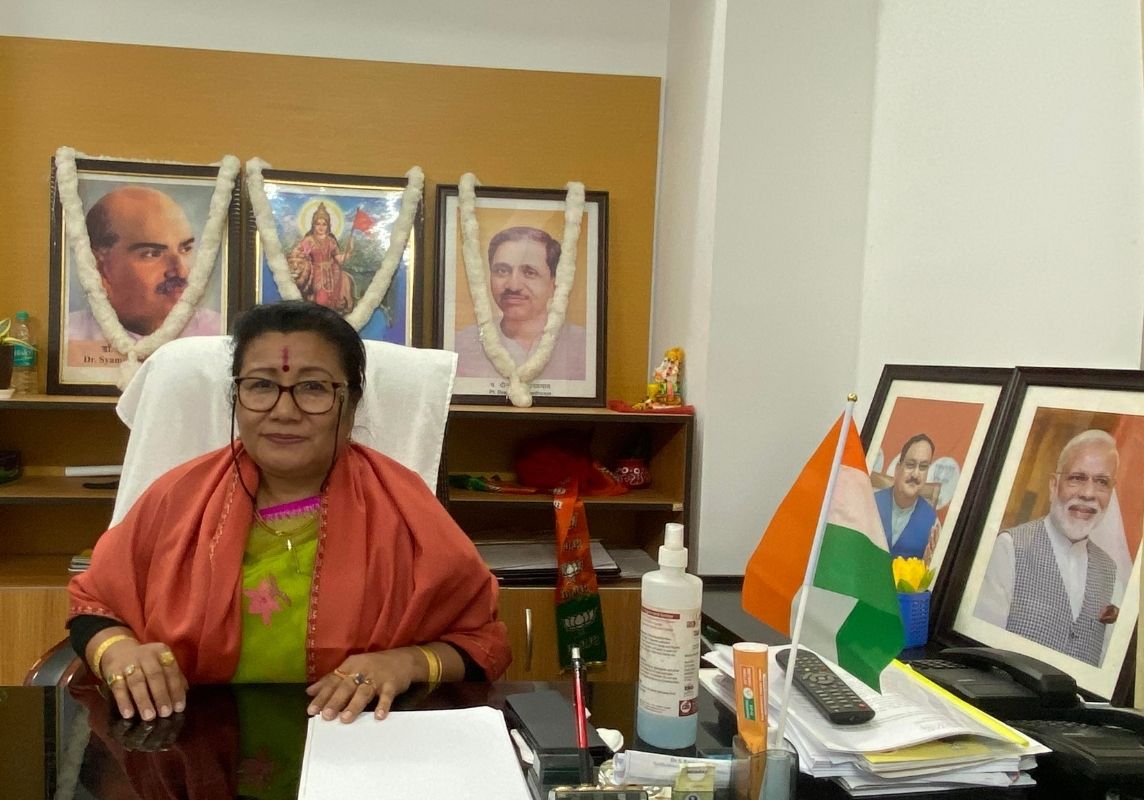 With voting for the 60-member Manipur assembly just a few days away, the election campaign is getting more intense, aggressive and bitter. While each party continues to make popular and heavyweight promises, it is the ruling party Bhartiya Janta Party (BJP) led government in the state that faces judgment on its work in the last five years.

During the 2017 state polls, the Congress emerged as the single largest party with 28 seats – only three short of majority – the then governor Najma Heptullah (also a senior BJP leader) chose to invite BJP to form the government after a group of BJP MLAs led by Himanta Biswa Sarma, the convenor of BJP’s North East Democratic Alliance, submitted a list of 30 legislators from National People’s Party (NPP), Naga People’s Front (NPF) and Lok Janashakti Party (LJP) supporting it.

BJP’s government in 2017 brought an end to the 15-year-tenure of Congress’s Okram Ibobi Singh, the longest continuous rule by any chief minister in the state since independence. Manipur CM N Biren Singh was himself a minister in Ibobi’s government before he defected to the BJP in 2016.

While the rumblings within the BJP over its chief ministerial face grow louder and the party continues to take ‘uncomfortable’ positions by its own standards, in an exclusive interview with Mojo Story, the state President and senior BJP leader Adhikarimayum Sharda Devi talks on a plethora of political issues surrounding the election:

The BJP has been in power in the state for the last five years. What according to you has the government achieved and missed or unfinished in these years?

BJP’s main agenda is peace and development. After five years of good governance, we are fully confident that we will win the elections.

Our achievement number one is, the Prime Minister has already announced the Ujwala Gas Scheme i.e; free gas cylinder connection. Second, at the state level, Chief Minister Hakshelgi Tengbang (CMHT), a health scheme that will provide two lakh rupees to the beneficiaries. The third is Ayushman Bharat. All this has been done for the welfare of the people. Another one  that our Chief Minister had announced was “Go to Hill, Go to Village.”

In the last 15 years of Congress rule, communities in Manipur didn’t have good relations among themselves. But after the announcement of “Go to Hill, Go to Village,” the relationship among communities in the state has improved. This is our achievement.

Unemployment is a national issue today and also a prominent issue in Manipur. Does BJP have any roadmap to tackle the issue?

Firstly I would like to say, unemployment is the gift of the Indian National Congress because, after 75 years of Independence, they ruled almost for 70 years in the state and at least 60 years at the national level. During all these years they didn’t form even a single policy because they lacked vision. Hence, unemployment should have been obvious, as I said, Congress’s gift.

But this time our honorable Prime Minister has come up with programs like, “startup, stand-up, vocal for local, make in India, aatmanirbhar and fit India” – these all are schemes usually for the youth. In Manipur, youngsters are getting benefits of these start-up schemes and we are empowering entrepreneurs. When we empower them, help them in developing skills, they will provide jobs – be it in strawberry farms, apple farms.

Only government jobs are not jobs, one should be ‘Atma Nirbhar’ (self dependent).

But government jobs provide a sense of social security. And when Congress failed to deliver, the BJP got a massive mandate across the country. People bestowed their faith in you. Now after eight years, you say unemployment is the ‘gift’ of Congress, are you saying that BJP couldn’t do anything in these eight years?

No, we have done a lot of things in these 8 years. See, when you talk about social security, do also look at the policies undertaken by our Prime Minister Narendra Modi. He has started: Pradhan Mantri Jeevan Jyoti Yojana, Pradhan Mantri Surakhsha Bima Yojana etc. Apart from this, we also have provided schemes like Atal Pension Yojana. Any person after the age of 60 can carry forward his life through ‘Atal Pension Yojna’.

Coming back to the state of Manipur, the Chief Minister said that he and the people of Manipur want AFSPA to be repealed. But BJP’s manifesto does not mention this. Your comments?

But then why when the Chief Minister made it public that the people of Manipur want AFSPA repealed, the BJP’s manifesto which was released just a few days later after the statement still had no mentions of AFSPA?

Not only the Chief Minister but all the people of Manipur want AFSPA to be repealed.

That’s the point. You are too admitting that the demand to repeal AFSPA is the people’s voice. So, why isn’t it mentioned in the manifesto?

If AFSPA is not mentioned in the manifesto that does not mean we are not committed to repealing it.

As I have already mentioned, Congress had been in power in Centre and State for the longest period of time. They too couldn’t repeal AFSPA except some places. And people are questioning us?

Even I want AFSPA to be repealed. We are looking into the causes so as to why the Congress government couldn’t repeal it. We are studying the root causes of AFSPA. Meanwhile, we also need to ensure that no untoward incident happens during this period. We are trying to find a way forward.

Former BJP Manipur Pradesh Chief Spokesperson Chongtham Bijoy has alleged that you  expelled him from the party. Now the case is in court and the court has summoned you. Your clarification?

We have removed him from our party because of indiscipline. Our party too has a constitution. If he makes comments against BJP at a press conference under the banner of BJP and appeals to people to not vote for BJP’s candidate, this cannot be acceptable. Hence, he was expelled from the party.

(Laughs with a wink) What should I say? It is a friendly fight.

Do you mean it’s a friendly fight between the BJP and NPP?

I mean the NPP is our coalition partner. BJP until now hasn’t spoken too much against them.

The NPP is attacking us because we are the biggest party. They know BJP is going to form the government. Let them attack, they will come back again (to BJP).

Are you saying that they will again come for the post-polls alliance?

We are going to form a government in Manipur with 40+ seats. We want the government to be stable. As far as the question of the alliance is concerned, I will not make any statement on that until a decision is made by our high command. After the elections, many parties may approach us and we will think about that.

Do you mean to say that the BJP is open for a post-poll alliance with any party?

(Laughs) No, I will not even say that. We will have to wait for that decision from the high command regarding coalitions.

All these visits are not related to elections. Our Prime Minister believes that India could only develop when the Northeast develops. BJP works on the philosophy of – Sampark (Connect) and Samvaad (Dialogue).

BJP keeps on mocking Rahul Gandhi. If he is irrelevant, why does the BJP continue attacking him? BJP’s National Spokesperson Sambit Patra recently at a rally said, he is happy as Rahul Gandhi is coming to Manipur, “wherever he campaigns, BJP wins.”

But when you attack him isn’t it that you make him prominent?

(Laughs) No, no, the public is not interested at all in Rahul Gandhi. If you have to get something out of him (Rahul Gandhi), provoke him. He is very childish.

According to the reports, BJP has hinted that if BJP comes to power, CM N Biren Singh Singh will get a second chance.

No, No. It will be decided by the party’s high command. What I can be sure of is, N Biren Singh is our Chief Minister at the moment. As a President, I do not have any official information on this.

But it’s already being reported in the press?

(Laughs) As I said, currently our Chief Minister is Biren Singh.

Does it mean if BJP wins favourable numbers, there may be a rethink on N Biren Singh’s Chief Ministerial candidate?

We will follow the orders from our high command.

I guess you are answering it like this because you know there is a rift within BJP on the Chief Ministerial candidate?

No, that is not the point. See, the political scenario of Manipur is different. Calculated political steps need to be taken keeping in view the external circumstances. Our high command is also aware of this fact. What I know is, at present N Biren Singh is our Chief Minister and decisions about future candidates would be taken by party high command.

That’s a clear hint that there might be a rethinking based on the number of seats the party wins?

See, BJP will definitely get the required numbers. I am confident about that. But as a State President of the National Party, decisions will be taken in consultation with the high command.

If I may ask, does the State President not have aspirations to become CM of Manipur?

(Laughs) I am happy to take any role that the party deems fit for me. By god’s grace, BJP has given me so many opportunities. I am always thankful to the party that they have bestowed their belief in a woman leading the organization in Manipur.

The people of Manipur and northeast, in general, are seriously concerned about Palm Oil cultivation in the region.  It is detrimental for the environment and communities. Your government too has launched schemes around it. Would you consider public appeal if voted back to power?

Definitely, we will look into it. We will investigate and do whatever shall be suitable.

Last question, BJP’s politics is said to be communal. Even the recent controversy around Hijab is said to be manufactured and part of election strategy. Is it so?

I would not like to speak much on this. But one thing is clear: BJP is not communal. All the schemes and programs of our government are for the people of this country. There is no discrimination in our social schemes – be it for Muslims, Christians or Hindus.

The parties charging BJP of being communal are the ones, like that adage – “One who indulges in theft sees a thief in everyone.”

Don’t you feel the polarization between Hindus and Muslims is increasing to dangerous levels?

No. If you see our government, we are considering the representation of every community in the council of ministers be it Schedule Caste, Schedule Tribe or any other minorities. So, there is nothing about polarization.

(The interview has been minutely edited for brevity and clarity.)