Delhi Is Witnessing A Dengue Surge. This is Why.

Most of the beds in the male dengue ward at Swami Dayanand hospital in Dilshad Garden are full of patients, some of them are resting in their beds while others visit their families. Sunita (name changed) 25, sits on an iron cot with her mother and mother-in-law, who are constantly calling their relatives on phone for the B+ blood for her husband, whose platelet count has dropped to around 10,000.

“We’re attempting to get blood for my husband,” she explained, “but either we didn’t get the same blood group or it’s unavailable at the concerned blood banks.” She said this while coddling her twelve-year-old daughter in her arms. 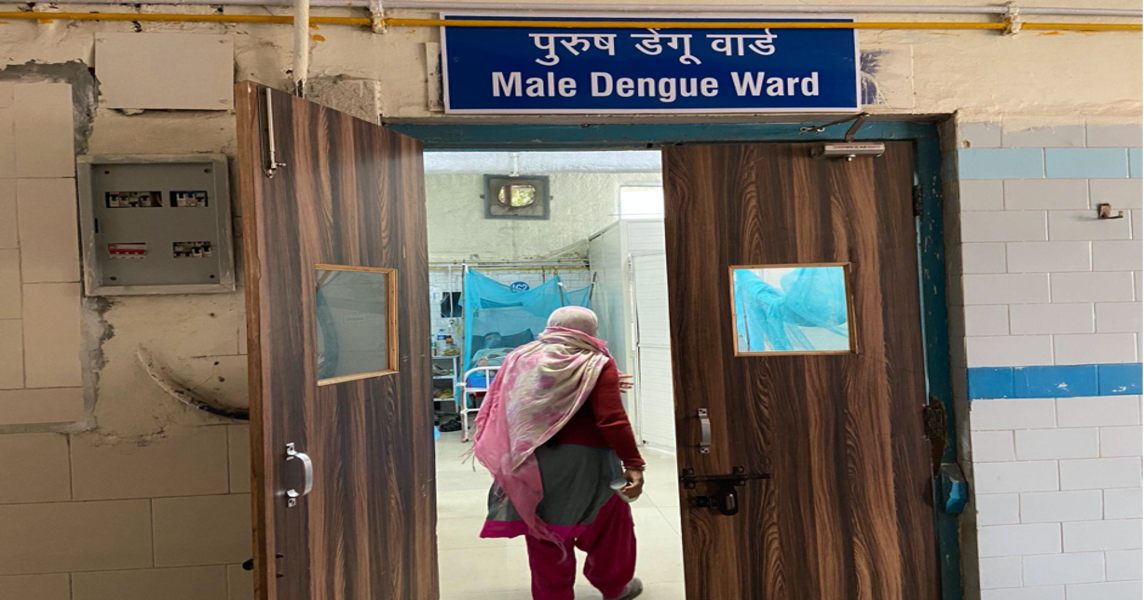 The situation at the adjacent Guru Teg Bahadur Hospital is similar; in response to the increase in Dengue fever, the hospital has designated four wards: 16,17, 26, and 27. Naseem Khan, a resident of Lakhimpur, stood outside Ward No.26, where his thirteen-year-old son had been admitted. “Doctor handed me this slip to bring this medicine, and I don’t even know where the medicine shop is,” Naseem explained.

I am an uneducated worker in a wood shop in Delhi’s Seemapuri neighbourhood.” Naeem stated this as he dashed towards the pharmacy. He also expressed his displeasure with the government’s indifference towards dengue .“Dhuwa to chodiye sarkar sahi se safai bhi kara deti to itne cases nahi badte.” (There would be no such large increase in dengue numbers if the government cleaned the drains correctly; fumigation is a significant thing to expect from this government.)

“My son’s platelets declined to 35,000, doctor yet not confirmed dengue but he has all the symptoms of the infection. My son lost too much blood in excretion, this is worrisome for me.” said Naseem.

The hospital employee, who spoke on the condition of anonymity, informed us that the situation is worse this year than the last, which is why we had to reserve these wards for dengue patients. In the previous two days, I’ve seen two deaths here due to dengue fever, claimed employee. 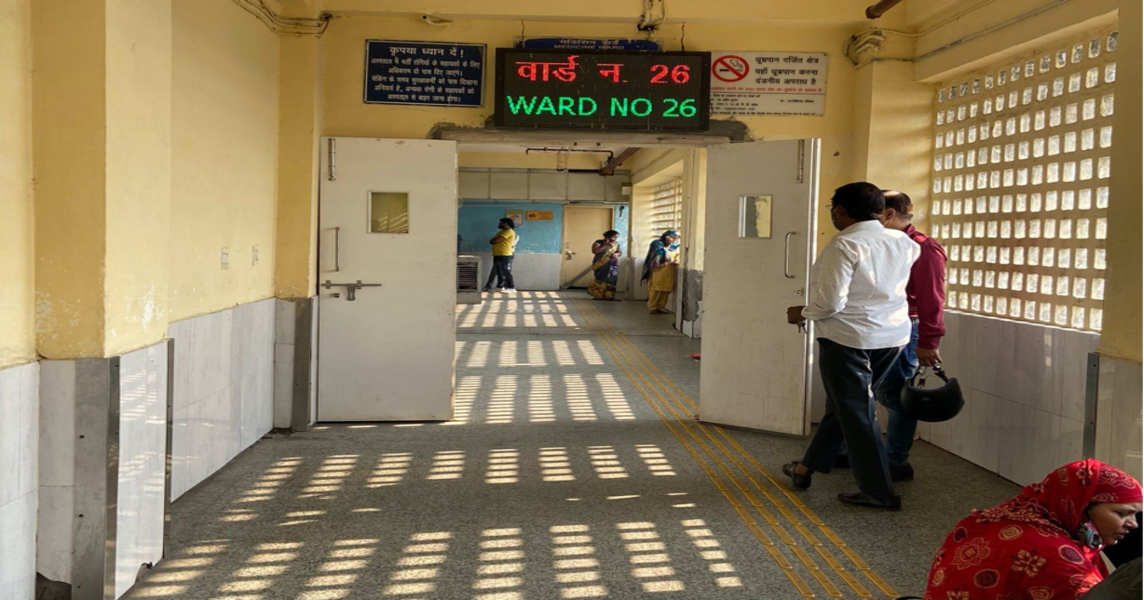 A similar situation was in the Department of Medicine at the Safdarjung Hospital, which is run by the Central Government. People who were waiting outside to visit their family built temporary beds out of tarpaulins or bedsheets.

Krishna Das, 37, who took a day off from his catering job to look after his sister’s son, “These government hospitals are lifesavers; my brother’s son was previously admitted to a private hospital in the area. Because we cannot afford the hefty cost of a private hospital, we moved him to Safdarjung,” Krishna explained. “I have a very low pay,” he continued, “and I have to take leave to look at my patient, which is another cut in my salary.”

Dengue fever is wreaking havoc on our health and finances.”  When asked how he spent the night there, he replied, “We sleep under the trunk of this tree.” pointing to the trunk. “The weather is temperate these days, so a single bedsheet cover is comfortable at night,” he smirked, “but mosquitoes are a significant problem there.” 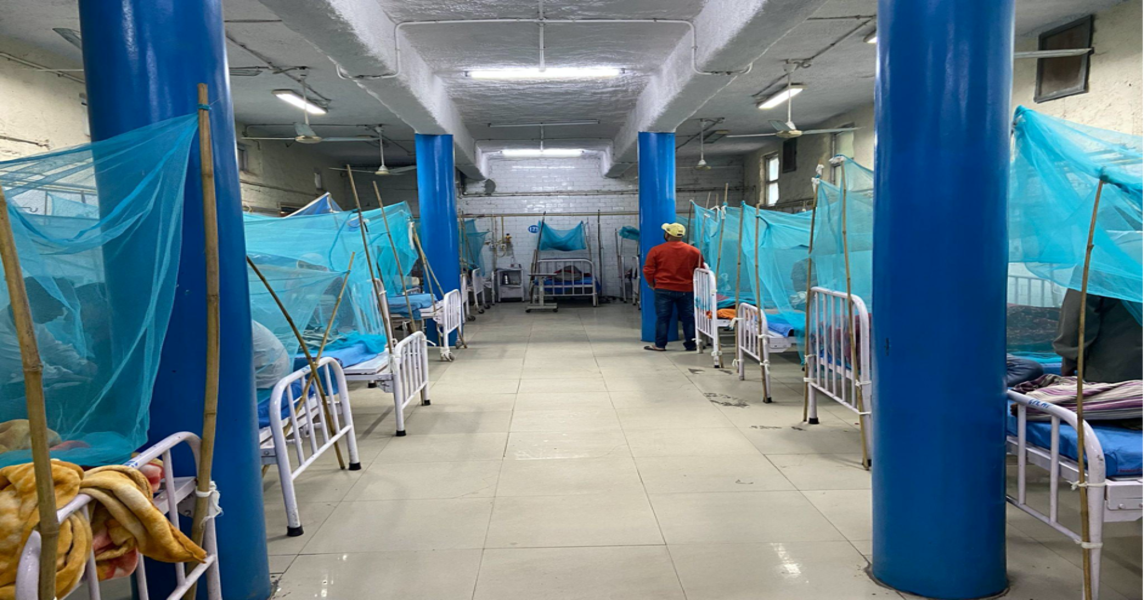 This year fogging – the use of a fine pesticide spray directed by a blower to kill mosquitos-came to a standstill due to the second wave, as many of the domestic breeding checkers (DBC) employees died during the period. However, Colonel B.K. Oberoi, Chairman of the Standing Committee in South Delhi Municipal Corporation, denied this and said the municipal corporation is doing its duty properly to combat this menace. He remarked on the Delhi government of their “10 Hafte-10 Baje – 10-minute campaign.” and said it was a gimmick.

Delhi’s Aam Aadmi party had launched this campaign in 2020 to curb the dengue and request the citizens to give ten minutes at 10 pm every Sunday for ten weeks to check whether your house has any stagnant water. “Prolonged rain in the capital is the primary cause of this increase in dengue cases,” Oberoi continued. Rain fell in October this year, increasing the breeding grounds in the city.

In addition, the delay in winter is creating favourable conditions for Dengue insects.”Dr Suresh Kumar, Director Lok Nayak Jan Hospital explained, “Compared to last year, this year Dengue cases are high. We have currently 80 confirmed and suspected patients in our ward. Most of the patients have either low platelet count or high fever.

In terms of preparation, we are fully prepared, we make the separate Fever ward for Chikungunya, Dengue and other illness. We also reserved the blood in our Blood bank for emergency use and reserve the 200 units of Platelet in the platelets bank.

Dengue fever is a mosquito-borne viral ailment caused by the dengue virus, according to the World Health Organization (DENV). Female mosquitoes, mostly Aedes aegypti and, to a lesser extent, Aedes albopictus, spread this virus. Infected female mosquitoes, typically the Aedes aegypti mosquito, transmit the virus to people through bites. Other Aedes species can also operate as vectors, although their role is secondary to that of Aedes aegypti.

When a high fever (40°C/104°F) is accompanied by two or more of the following symptoms during the febrile phase, dengue should be suspected: severe headache, pain behind the eyes, muscle and joint pains, nausea, vomiting, swollen glands, rash.

How is Delhi tackling Dengue?

B.K. Oberoi told us, “Municipal corporation is working at its best now, we are conducting daily door to door check-ups, increased the fumigation and providing every medical facility in our hospital.”

Looking at the sudden spike in Dengue, the Municipal Corporation of Delhi, set up a 15-bed facility in Tilak Nagar colony Hospital with prerequisite healthcare facilities.

Like this, East Municipal corporation also set up a separate 160-bed facility for dengue patients at Swami Dayanand Hospital. Last week, the Delhi government authorised state-run hospitals to use a third of the Covid-19 beds set aside for dengue, malaria, and chikungunya patients. 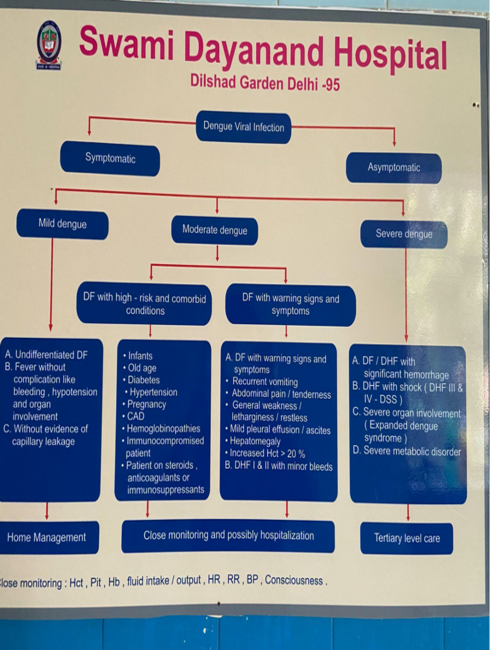 In the last one month, the capital city, Delhi has witnessed a surge in Dengue cases in comparison to past years. Till October 31st, Delhi has reported 1,537 cases of Dengue, of these more than a thousand cases were reported in October month alone.

The Diwali festive week saw 1,171 cases. These numbers have been highest in last five years. As per the South Delhi Municipal Corporation records, six confirmed Dengue deaths are reported in the Delhi – highest since 2017. He also mentioned that more than 150 hospitals have sent their data to SDMC, and some are even sending in the back log.

The Union Health Minister Mansukh Mandviya also chaired the meeting to review the situation of Dengue in Delhi and asked the Union’s health secretary to dispatch expert teams to states with a high number of active cases. The minister stated following the meeting that hotspot identification, timely treatment, and fogging will be used to combat the disease. 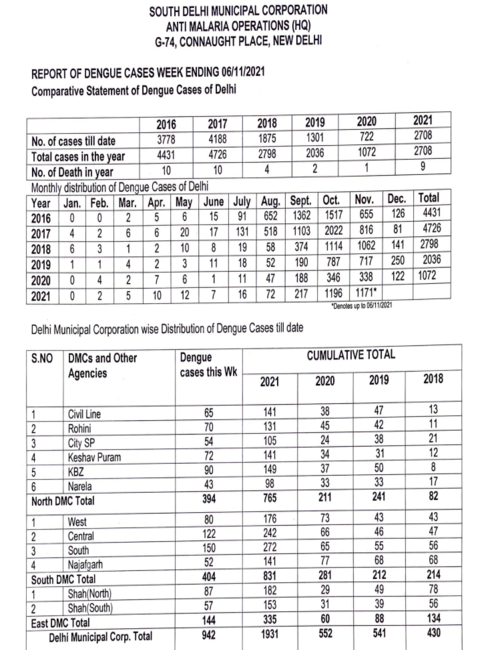 Activists Arrested In Delhi While Protesting Against Agnipath
As Political Parties in Manipur Vow to Repeal AFSPA, Survivors Call it a ‘Hollow’ Poll Plank