On the Menu. A Day in the Life of a Delivery Boy.

In Mumbai, it is Visarjan — the last day of Ganesh Chaturthi, undoubtedly one of the busiest, most crowded days in the financial capital. Suddenly the skies burst into an outpour. Within mere minutes, the humid city is drenched, its floor now a slurry of tar and soil, its air filled with the sound of a thousand vehicles honking, all at once. The doorbell rings and a friend opens to collect some food we had ordered before the rain. The young man who was delivering our food was drenched to the bone. Shivering, he handed over a paper bag, now a soaked mesh — indicating just how severe the rains were, to thoroughly wet such a well protected package. We asked if he would like to sit indoors for a few minutes until the rains subsided. He refused saying he had to deliver his next order right after. 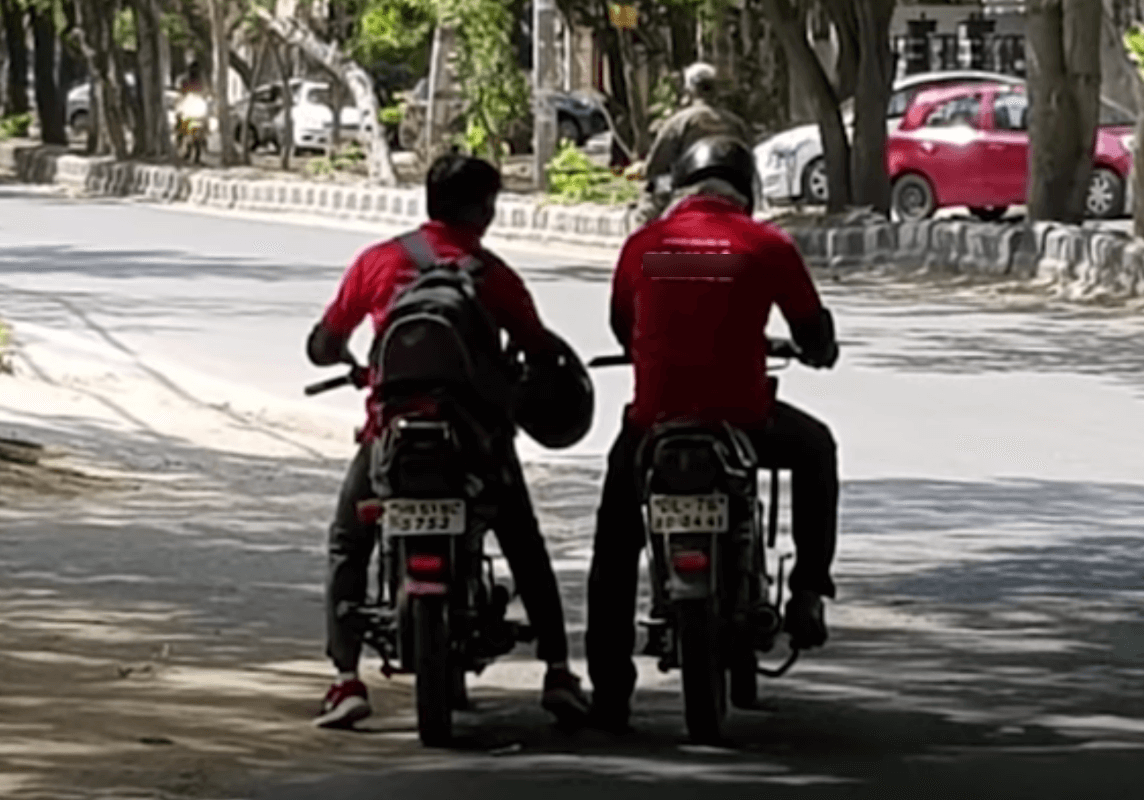 This is the reality for most food delivery partners across the country. From the very beginning of their association with these apps, delivery executives are expected to pay from their pockets. There is a deposit to be paid upon joining and it ranges from Rs. 1000 to Rs. 3,500 depending on the partner’s location and time of joining.

And they are expected to pay for their uniforms, food delivery boxes, jackets and even raincoats. After this, delivery partners clock in 13 to 16 food deliveries each day, chasing after incentives that they never have the guarantee of receiving. “Before the COVID-19 pandemic, things were a lot better for us,” said B. Anand, a delivery executive working in Bangalore.

“Earlier I used to earn around Rs. 40,000 but now I barely make half of it,” he added. There are a few reasons for this, but perhaps the most important is the hike in fuel prices. Nearly two weeks before the Narendra Modi led NDA government took power in 2014, one litre of fuel cost Rs. 71.41 in the capital city of Delhi. On September 27, 2021 the same litre of petrol costs Rs. 101.19. For food delivery gig workers, who travel kilometers on end each day and pay for their fuel, this causes a huge problem.

“Petrol prices have increased so much that if I work for Rs. 700, I burn Rs. 250 on petrol itself,” said a delivery executive on ‘Food Delivery Workers in India – an untold story’, a documentary made by Indian Federation of App Based Transport Workers (IFAT). In September, 2018, IFAT was founded as a federation that works for the rights and dignity of app based transport workers, which includes drivers with Ola and Uber, food delivery partners with Swiggy and Zomato and others. According to delivery executives, IFAT and other association members, the prices for deliveries were arbitrarily changed and slashed during the pandemic.

“Now they club deliveries,” informs Anand. “Earlier, we got separate payments for each individual delivery. But after clubbing them, the second delivery is looked at as an extension of the first so we get paid only Rs. 11 or 12 for the second delivery.” Allegedly, there is also no transparency in how incentives are calculated.

“Throughout the week some delivery person’s rating will stay at 5 stars and over the weekend it will drop without any reason. So delivery agents lose out on incentive,” said Dathathreya Raju, president of the Bengaluru based Delivery Boys Welfare Association (DBWA). “Furthermore, they are also penalised often, many times even when they aren’t at fault,” he added. 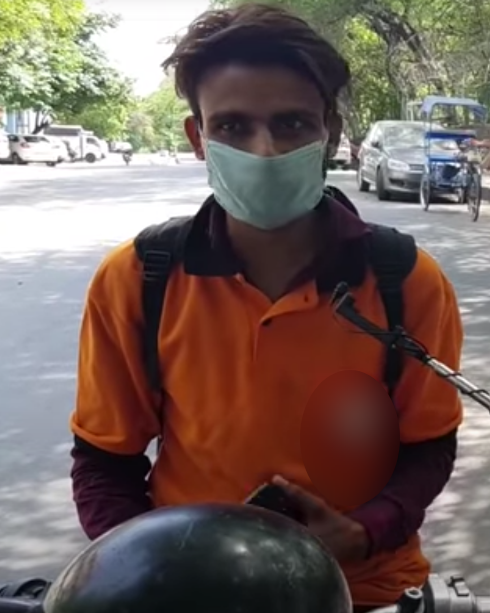 While these details seem hazy, they have a real life impact on the everyday lives of delivery agents. A few weeks ago, my roommate ordered food a little after midnight. About 30 minutes later, he received a call from the delivery executive. “Sir, my bike broke down on the way and it’s too late for the mechanic to be open. Could you please cancel your order?” he asked in Kannada. When my roommate asked the delivery partner to cancel instead, he informed him that the app will charge him a penalty of Rs. 500. This penalty is also levied when customers complain against delivery partners for the fault of the restaurant.

“Sometimes the restaurant just packs the food improperly and gives it to us. If it leaks or spills, the customer blames us and gives us a bad rating,” said a delivery worker in IFAT’s documentary. These steep penalties — sometimes costing more than a whole day’s earnings — not only take a big chunk off the delivery agent’s income but also are a huge waste of the person’s time and energy. Not to forget that this money is integral for them to pay for fuel.

“Despite doing more deliveries and working longer hours, gig workers are paid lesser now,” said Shaik Salauddin, General Secretary of IFAT. When they ask these companies for the reason behind this, the workers are told that the food based apps aren’t making profits. “Even if we all opened our own businesses we wouldn’t have to work so hard while making less money,” said Salauddin.

But for the last few years, organisations like IFAT and DBWA as well as anonymous, individual delivery agents have taken to social media to lay out their problems. However, it is only in the last few months that these pages have gained more traction and engagement.

In one of the first posts to go viral, a post by @SwiggyDEHyd on Twitter shared a screenshot of his daily earnings from each delivery. The highest payment was Rs. 29 and the lowest was Rs. 10. The social media outrage and discussions after this post encouraged more delivery executives to open up about their working conditions, wages and the risks they face.

Soon, Twitter was flooded with screenshots of unfair penalties, low income, delivery agents informing people that they have no clarity on tips or ratings and other irregularities. In the days that followed, there was a constant demand from the delivery workers as well as netizens for increased accountability and transparency from Swiggy and Zomato as well as better working conditions for their delivery partners.

In response, Zomato ran a video with social media celebrity Danish Sait where the influencer fills in the shoes of a delivery executive, making food deliveries throughout the day.

When Zomato was called out for putting out image building campaigns instead of bringing about tangible change, they doubled down with an advertisement with Bollywood actor Hrithik Roshan. “If these companies don’t have money to pay delivery workers, how are they paying for these expensive actors and advertisements?” questions Salauddin. 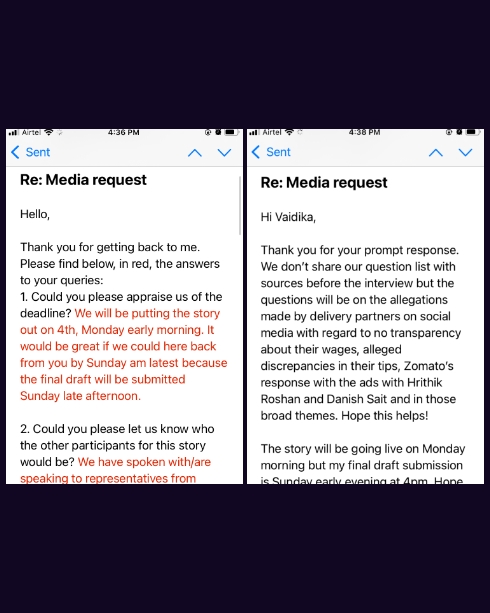 While pressure from social media has helped bring visibility to the plight of delivery executives, it isn’t enough. Especially while discussing the gruesome deaths of delivery workers in accidents during work hours.

The IFAT documentary shows all the delivery executives speaking about at least one other co-worker dying. These apps incentivize quicker deliveries and puts an unspoken pressure on delivery executives to ride faster to make even Rs. 20-30 more. Apart from this, there is also pressure from the customer for their food to reach them earlier.

“They say there is insurance of upto Rs. 10lakh in case of accidental death on duty but it barely reaches anyone,” said Dathatrya. Often loopholes and arbitrary reasons are given to drag out or not fulfill insurance obligations leaving families who have lost their bread winners to fend without compensation.

To tackle all this, in September 2021, IFAT filed a Public Interest Litigation (PIL) with the Supreme Court, demanding that the Union Government help delivery executives who have been affected by the pandemic, as well as ensuring that the workers are recognised as unorganised workers so they can avail benefits and policies created for them.
“Delivery partners and the gig economy are not a part of any government department.

We don’t know if we are part of the labour department, transport department or the IT department,” said Salauddin. “That is why it is easier for these companies to exploit us,” he added. In this petition, Zomato, Swiggy, Ola and Uber India have also been named as respondents. Represented by senior advocates including Indira Jaisingh and Gayatri Singh, Salauddin says this is only the beginning and they still have a long way to go to ensure fair treatment of app based transport workers. “We have taken our concerns to the court of law. We have full trust in the CJI to bring us justice,” said Salauddin.

Mojo Story has reached out to Zomato and Swiggy for their comments. Once given, the article will be updated.