Goa Elections: Defections, Corrupt Party Loyalties, MLA’s ‘then and now’ Against Each Other

In the elections with bleak political ethics, there is common slang in the Goan election fest this time, “Jeete koi bhi, jaega BJP me hi.” From Mandrem in North Goa to Canacona in the South, candidates have shifted their loyalties in the run-up to the elections. 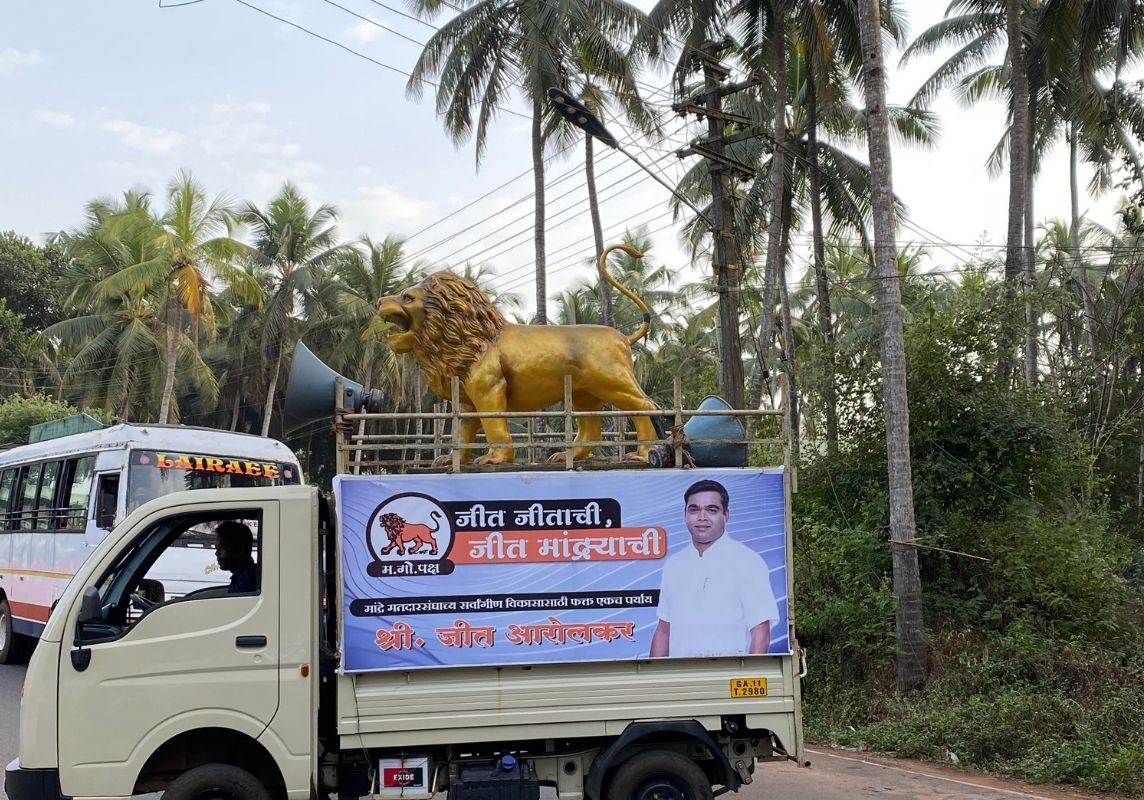 However, there were indications earlier that a Congress, Trinamool Congress, Goa Forward Party and MGP might come together to contest against BJP. TMC’s Goa in-charge and West Bengal’s Lok Sabha MP Mahua Moitra, on January 7 tweeted, “Rest assured, we the AITC will do everything possible to defeat BJP in Goa – @Goaforwardparty, @INCGoa @AITC4Goa and #MGP. @Mamataofficial has done it in the past & will not shy away from walking extra miles in Goa too.”

Rest assured, we the AITC will do everything possible to defeat BJP in Goa- @Goaforwardparty , @INCGoa@AITC4Goa and #MGP. @Mamataofficial has done it in past & will not shy away from walking extra mile in Goa too.

“Equations in all the states are different. We are in alliance with Shiv Sena and NCP in Maharashtra but in Goa, we have higher winnability. Had their demands been reasonable, we could have formed an alliance,” a senior Congress leader who arrived in Goa to the campaign told MoJo. And what about equations with TMC? “It’s complicated. TMC is trying to play a big brother in opposition unity which is, of course, good for them but not for us,” he chuckled.

BJP is aware of this fact and wants the AAP and TMC to fight with full strength believing it would possibly dent Congress’ fortunes. “BJP is fighting elections on the issue of development. We don’t engage in mudslinging,” Dayanand Sopte told MoJo, who himself is a new BJP entrant. 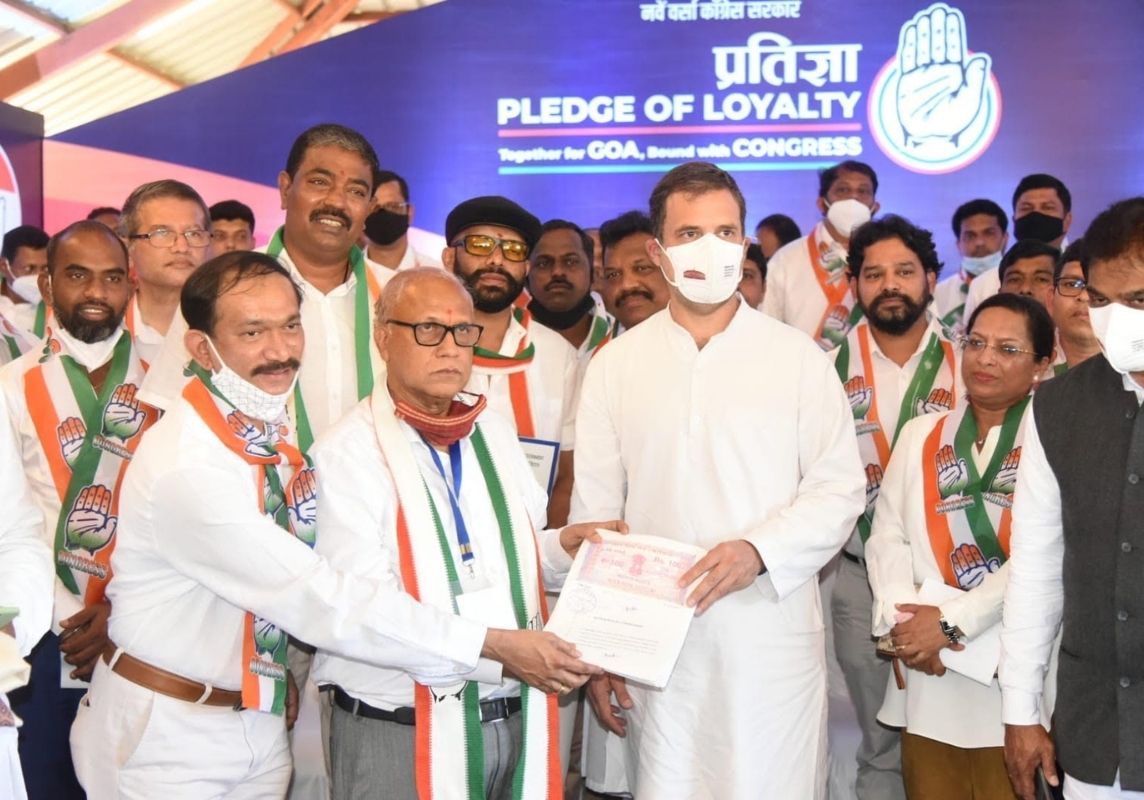 Goa Congress has learnt its lessons the hard way with 15 of 17 elected MLAs having switched over to the BJP in the last five years (2017-2022). It has done extensive damage to the image of the party hence, the Grand Old Party to avoid repetition and take people in confidence, took its candidates to the Mahalaxmi temple, Bambolim Cross and Hamza Shah Dargah in Goa to ‘pledge loyalty towards people of Goa and party.’

“We, Congress candidates, pledge that once elected, we will stay with Congress and work for the betterment of the people for the next five years, irrespective of offers made by the Opposition. We will leave Congress at no cost,” read the pledge in the presence of senior Congress leader and senior poll observer in the state P Chidambaram.

Congress candidates from across Goa visit Mahalaxmi Temple, Bambolim Cross & Hamza Shah Darga and took a pledge of loyalty towards the people of Goa & the party. #PledgeOfLoyalty pic.twitter.com/dtfIFUyuwn

How do Goans see pledges like this? “I mean it is hilarious, I know. As if these candidates who are winning don’t take oaths to the constitution. You may say these are political stunts but then it’s politics and everything is done for a purpose,” said a Congress worker who happened to accompany MLAs to Mahalakshmi temple.

AAP and TMC have been aggressively campaigning against Congress asking voters not to vote for Congress as it would be a ‘waste’ of the vote. Hence, the pledge exercise is also seen as a counter to both parties.

“They (parties) are creating a false impression so that Goans don’t vote Congress. But these parties are only poaching our MLAs. We are vigilant and aggressive this time. Through our pledge, we are making a statement that Goans are not for sale. Goans believe in communal harmony and are faithful to God and we all Goans fear God,” told Digambar Kamat, a Congress MLA from Margao.

While AAP continues to invoke the case of maximum defections in Congress, the party ensured all their candidates sign a legal affidavit to be ‘loyal’ to the party and people of Goa after the results. The oath, which was taken in presence of AAP National Convenor and Delhi Chief Minister Arvind Kejriwal came a few days after the loyalty pledge by Congress candidates.

“AAP candidates will send copies of affidavits and they can be held accountable by filing a breach of trust motions on a defection. The signing of legal affidavits was a confidence-building measure among our voters.” said the AAP’s chief ministerial candidate Amit Palekar, remarking that anti-defection laws were very weak in India, particularly in Goa. The affidavit also mentions that the candidates who have pledged would work for Goans with utmost honesty and would not indulge in any kind of corrupt activities. 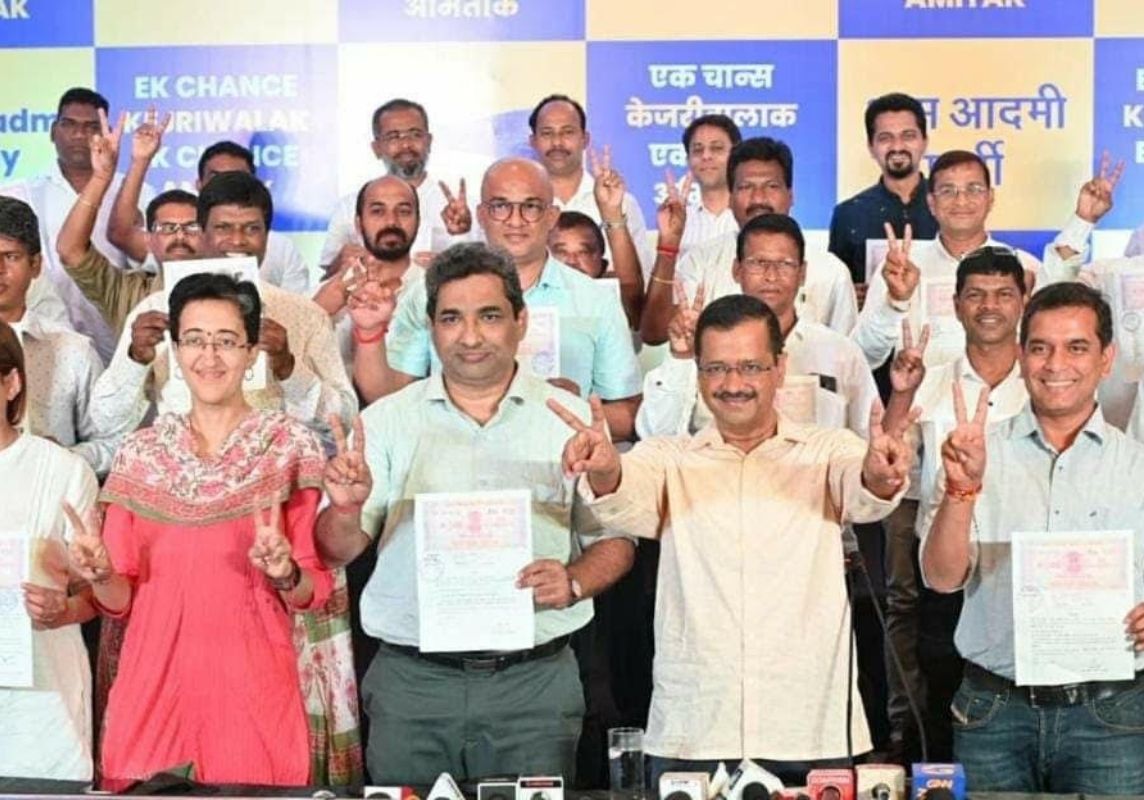 “The issue of defections has a peculiar history in Goan politics and has a prominence,” said Paresh Shetgaonkar, a former Maharashtrawadi Gomantak Party (MGP) worker, who is resolved to vote for NOTA.

“In 2017, Congress emerged as the single largest party by winning 17 seats while the BJP had won 13 seats. In July 2019, 10 Congress MLAs and two MGP MLAs defected to the BJP. With 27 MLAs, the BJP now had a complete majority,” he added.

He recalled how Vishwajit Rane, then a Congress MLA, resigned almost soon after the polls, walked out of the floor test and later joined the BJP when the Congress had emerged as the single largest party with 17 seats. “In a bypoll, Rane was finally re-elected as a BJP MLA,” he said.

Twelve additional MLAs joined the BJP during the next four years, including the former Goa Chief Minister Ravi Naik, who quit Congress and rejoined the BJP after 19 years. Two more MLAs joined the Trinamool Congress, Luizinho Faleiro and Aleixo Reginaldo Lourenco, reducing the Congress’s strength in the legislature to only two.

A report by the Association of Democratic Reforms (ADR) claims, “24 MLAs, accounting for 60% of the Goa Assembly’s strength, have switched parties in the last five years.” According to the ADR’s study, Goa has established a record that is “unparalleled” in the history of Indian democracy with these defections.

“In the five-year tenure of the current Assembly (2017-2022), as many as 60 per cent MLAs have changed their parties. It has never happened anywhere else in India. It is a clear reflection of utter disrespect to the mandate of voters. A callous approach to ethics and discipline overborne by uncontrolled greed at its worst,” said the ADR report.

In the elections with bleak political ethics, there is a common slang among Goans, “Jeete koi bhi, jaega BJP me hi (Let anybody win, ultimately will go to BJP.)”