Environmentalists speculate that the birds, one of India’s most severely endangered species, may have moved since their habitat in Desert National Park is becoming more and more scarce. 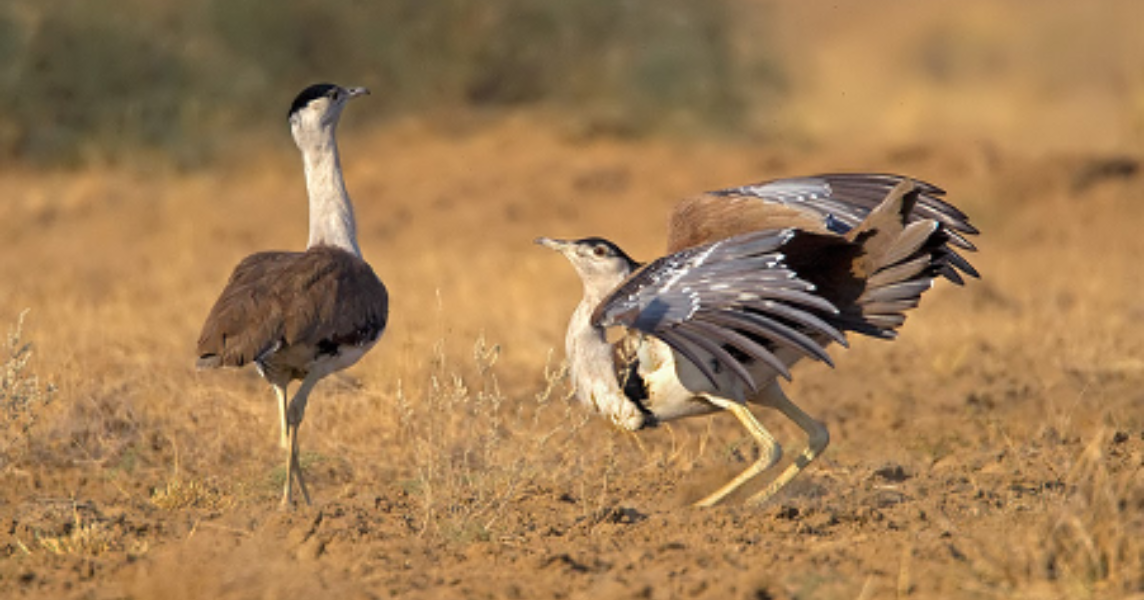 Three Great Indian Bustards (GIBs) were recently spotted in Pakistan’s Cholistan desert, sparking speculation that the endangered birds may have flown from India’s Desert National Park across the border (DNP). In Pakistan, GIBs are severely threatened by excessive hunting and a lack of protection.

Syed Rizwan Mehboob, a wildlife photographer based in Islamabad, discovered the GIBs earlier this month while exploring the Cholistan game reserve in the southern Punjab state. Environmentalists in the Jaisalmer district speculate that the GIBs may have relocated due to their declining habitat, despite Mr. Mehboob’s denial that they came from India.

The Great Indian Bustard (GIB) crisis and deaths from electrocution from high-transmission power lines in Rajasthan and Gujarat were the subject of petitions being heard by the bench.

The Indian environment ministry’s 1973 launch of Project Tiger is hailed as a major success.

The GIB is included on the Red List of the International Union for Conservation of Nature as “critically endangered.” It is a big bird with a wing span of two meters and a height of roughly a meter. 18 kilograms is the maximum weight of an adult.

Once upon a time, a regular witness in the Indian subcontinent, Great Indian Bustards are now only limited to the grasslands of Gujarat and Rajasthan. In the previous count back in 2018, the endangered species count went up to 150, out of which, 122 were in Rajasthan’s Jaisalmer. The slow breeders hardly lay only one egg in the whole year.

The supreme court mandated in April 2021 that electricity companies in Rajasthan and Gujarat build underground wire for new developments and place diverters on the region’s existing lines.

The installation of bird diverters was not finished, the SC bench, which also included the Chief Justice, Justices AS Bopanna, and V. Ramasubramanian, stated in the order.

“In Degrai Mata Oran (a type of sacred woodland) near Devikot, Jaisalmer, a Great Indian Bustard perished in September 2020 after colliding with the transmission cables. The next morning, a second bustard perished in the same Oran. Transmitter lines must be removed if the country wants to save the species.

It was reported to the Parliament earlier this year by the Union Environment Ministry that there were just about 150 Great Indian Bustards left in the country, with 128 of them remaining in Rajasthan and fewer than ten in Gujarat, Maharashtra, Andhra Pradesh, and Karnataka. Additionally, a conservation center is raising 16 chicks.

Since these birds lack frontal vision, they are unable to see power lines in the distance and maneuver around them due to their weight. Therefore, the main threat to the species is the power transmission lines. Another major concern comes from stray dogs.

The government-sponsored GIB conservation breeding has been going on since 2019 and has already produced a captive founder stock of 26 birds (16 of which are 1-3 years old, nine of which are currently in the current season and are 1-6 months old, and one wild bird which was rescued from 31 wild eggs collected between 2019 and 2022 from the Desert national park, Salkha, and Pokhran region of Jaisalmer).

In fact, initiatives have been underway for a while now to prevent these fatal collisions: Pokhran, in Rajasthan, tried installing ‘bird diverters’ as a short-term solution. “They work as reflectors for bird species like the Great Indian Bustard. Birds can spot them from a distance of about 50 meters and change their flight path to avoid collision with power lines,” Anil Kumar, who headed the diverter installation project by the Wildlife Conservation Society of India, told a news organization.

But to lessen the risk to their lives, a longer-term solution is needed. Based on the information presented, the court stated that “the extinction of the Great Indian Bustards is certain unless power line mortality is quickly alleviated.”

However, due to technical difficulties that various places might provide, a complete switch to underground wires would not be possible everywhere. In order to determine whether burying power lines is actually not possible in some regions and if it is, what solutions are available to lessen the risk and keep the birds from going extinct, the court has appointed a three-member team of experts and conservationists. The court has mandated the installation of “bird diverters” on all electricity cables in the interim.

Although the redesign is anticipated to be expensive, the petitioner’s attorney said that “cost of mitigation cannot justify the extinction of a species.” The court agreed, stating that saving the nearly extinct birds should come first, regardless of cost. In addition to using federal, state, and local funds set up for wildlife conservation, the court has further ordered power distribution firms to shoulder the expense.

Gujarat Polls: Unemployed Youths Upset With BJP Government Over Paper Leaks
On the Menu. A Day in the Life of a Delivery Boy.