“Don’t Treat Us Like Gods” : Inside Growing Violence Against Doctors

Almost a month ago, Dr. Gourab Roy and his family were assaulted over the reported death of a 28-year-old due to a heart attack, as per the official handle of West Bengal Doctor’s Forum (WBDF) who “strongly condemned the incident.” 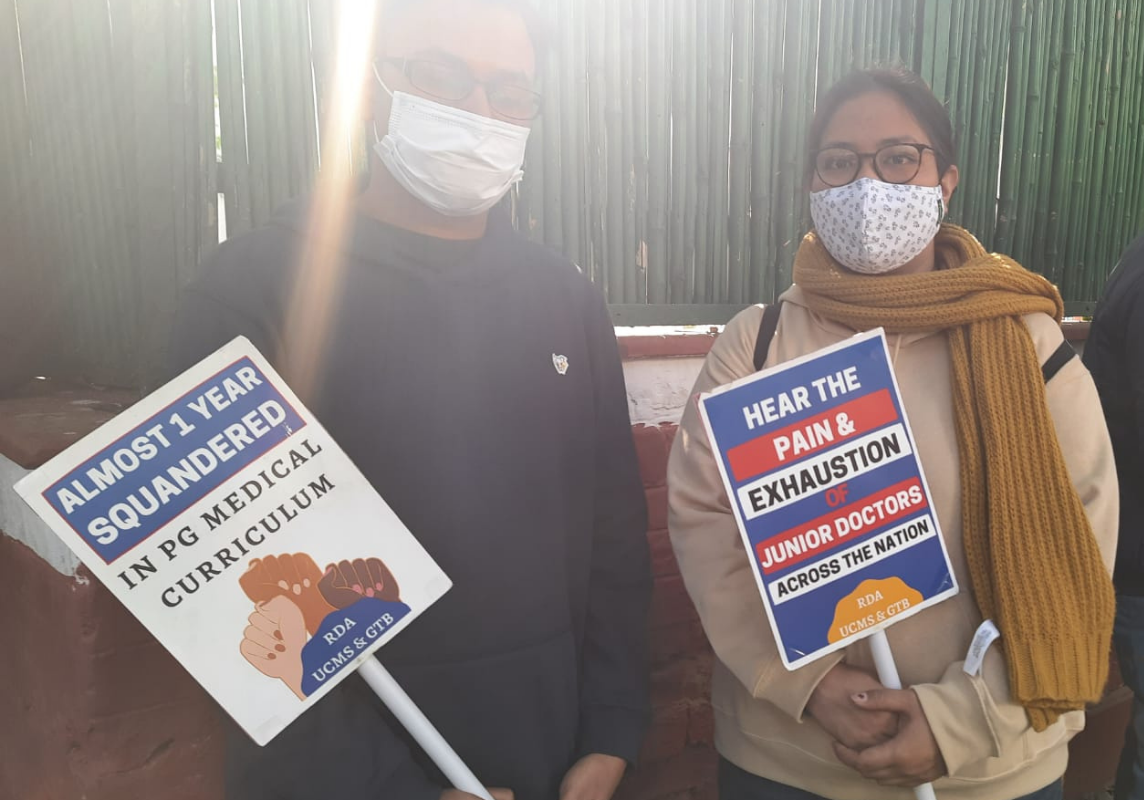 Junior doctors protesting in the national capital against the delay in NEET PG counselling.

This assault is part of an extensive list of threats and incidents that doctors in India have been forced to deal with. Workplace violence against doctors is not new, but it has reached pandemic proportions in recent years. Doctors are more concerned about their own safety and well-being at work.

According to the WHO framework Guidelines (2002), “Workplace violence is defined as the situations where staffs are ill-treated, intimidated or attacked in conditions linked to their workplace, including commuting to and from the workplace, involving an explicit or implicit challenge to their safety, well-being or health”

The violence against doctors made major headlines at the peak of the pandemic when reports emerged of doctors being physically abused by distressed relatives of patients. But, the trend has continued to take prominence at present times.

In Rajasthan, Dr. Archana Sharma died by suicide after she was booked for allegedly causing the death of a pregnant woman at a private facility in the state’s Dausa district. The medico had left behind a suicide note insisting she was not at fault, “My death may prove my innocence. Don’t harass innocent doctors”

Archana Sharma, a gynecologist, was handling the case of a pregnant woman who unfortunately died due to haemorrhage shortly after giving birth. The family of the patient was adamant that the doctor was responsible for the death of their loved one. The police took notice of the matter and registered a First Information Report (FIR) against Dr. Sharma and her husband.

An ongoing study by Indian Medical Association (IMA) reports that 75 percent of doctors in India have faced violence at some point of time in their life, and most of the time, it is verbal abuse. Emergency and ICU are the most violent venues and visiting hours are the most violent time

Instances of harassment turning into candour behaviour have become a growing part of everyday news. While Dr. Archana’s case was omnipresent in mainstream media, a similar case of harassment and defamation from Rajasthan barely made a dent in national headlines.

Dr. Roy works in a government hospital in Kolkata. He was at his home when he received calls for help. A young boy in his neighbourhood had fallen unconscious as he was returning home while complaining of acute pain in his chest and a shortage of breath.

“With no equipment at home or any home clinic, I told them I can just have a look at him but it’s better than the boy is taken to a hospital as soon as possible because the symptoms indicated a heart attack,” narrates Dr. Roy. 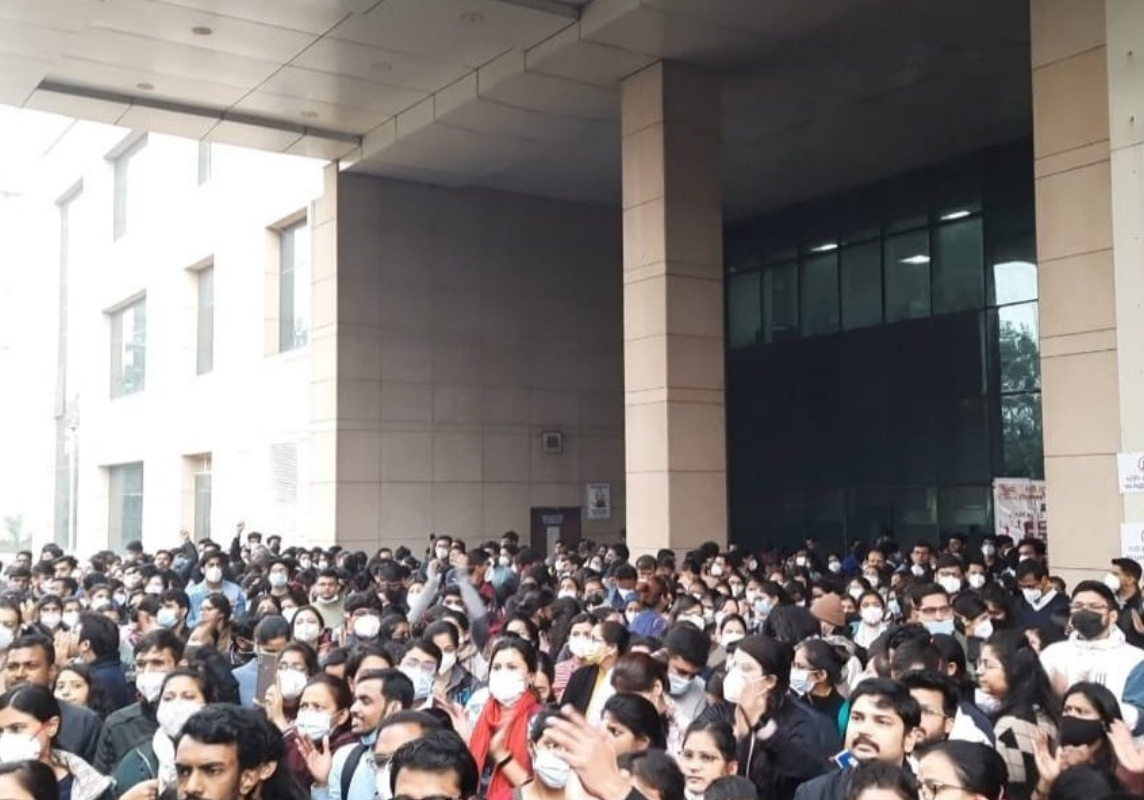 "We want Justice", slogans chanted by doctors as they gather at the Safdarjung hospital.

The ambulance was called up at Dr. Roy’s suggestion but the patient, unfortunately, passed away on the way. As soon as the hospital announced him dead, the family members showed up at the medico’s house angry and acrimonious. Dr. Roy, fearful of the gathering crowd outside, dialled up the police with whose assistance the group of people was dispersed.

The mob by then entered the doctor’s premises, vandalizing the whole house in the process. Dr. Roy’s family also suffered injuries, “they dragged me from the first floor to downstairs, I begged for mercy but nobody showed help.”

When the police did come, there were no arrests made. The officials escorted Dr. Roy and his family safely. “I received an award for my work during the covid pandemic and now getting thrashed by my own neighbours,” Dr. Roy tells Mojo Story.

An Indian Medical Association report suggests that close to 50% of violence is reported from ICUs and mostly involves relatives of the patients.

From the start of the pandemic and the havoc it left behind in its wake, the healthcare warriors and the doctors stood against all odds, working day and night, putting their own lives at stake with data suggesting that over 1,500 medicos lost their lives.

There have been multiple incidents of atrocities against Covid warriors, and several videos circulating on social media sent shockwaves across the state. Dr. Archana and Dr. Roy’s stories are a small scene from the larger picture.

For government hospitals and primary health centres across the country, particularly in West Bengal and Maharashtra, violence by patients’ relatives, local goons, political leaders, and even police has been reported.

Taslima, a female doctor whose name Mojo Story has changed to keep her identity safe, has faced harassment thrice and believes that female doctors are an easy target. Taslima was threatened by a family who kept insisting on taking the patient home despite the hospital advising them against it. The hospital asked the family to sign a consent letter so that the healthcare facility would not be held responsible.

Harassment in hospitals stoops down to gender-based violence. Taslima brought in a very crucial point on how female doctors and nurses were seen to be easy targets.

Taslima told Mojo Story about the misuse of smartphones and how it has become easy for people to use the internet and smartphones to cause them mental stress, “The patient’s family pulled out a smartphone and started making a video of me, saying that it was our fault that the patient was in a critical state and the hospital would be responsible if anything happened. We come across so many such cases on a regular basis and are always on the receiving end but no one listens to our plea, neither the seniors nor the public. The media also does not hesitate from throwing us under the bus without even knowing our side of the story.”

The doctor has admitted that post-Covid, people have become more aggressive. While doctors are called God, Taslima says that they need to be treated with half the respect that Gods are given.

“Not the patients but the attendants treat the female doctors very badly. Post-Covid, people have become more aggressive”, she ended with a note.

According to a report, 46% of doctors are stressed because of fear of violence, and close to 14% have a fear of being prosecuted.

Dr.Gourab' s father was brutally beaten up by the mob. 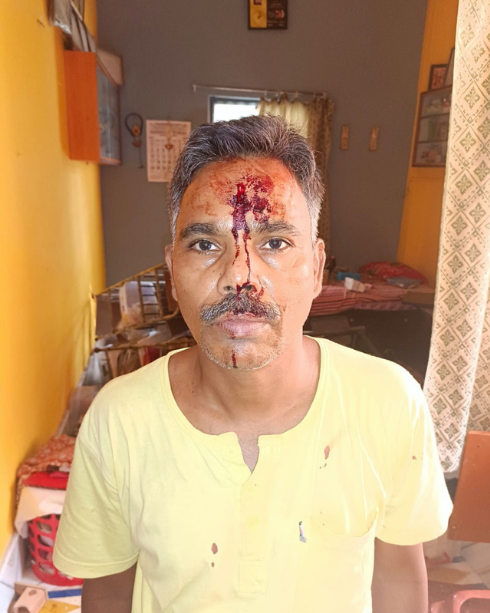 To back the claim, the doctor revealed an incident of a woman who was in labour and had to be operated on in order to save her and her child from any mishap.  When the family insisted on normal delivery, they were asked to sign the consent form, the family lashed out at the doctor and started hurling slurs at her, calling her incompetent.

The junior doctor also pointed out that it is not just the physical harassment but the verbal harassment, too, which leaves them scared.

Mojo Story spoke to Doctor Sayed Faizan Ahmed, a health care activist and the national council member of the Indian Medical Association. Dr. Faizan has worked in Delhi, UP, and is currently based in Assam.

“Doctors aren’t Gods, we are just normal people.” Dr. Faizan opened with a line. He added how important it is to readdress and re-educate people on how doctors should be viewed.

The very tradition that Indians have followed is labelling Doctors as ‘GODS’. Over a period of time, we have seen these ‘GODS’ being beaten up, thrashed, manhandled, and even harassed verbally by these same people who have noted them Supreme.

Reports have surfaced and the same is being uttered by the doctors on the difference between the doctors in private and government hospitals, facing the harassment by the public. In the past, the government sector doctors have always had an edge when it comes to facing the brunt from the public.

“It is mainly the government hospital doctors who face the heat. I think apart from our daily syllabus there should also be a subject on how the doctors should tackle the patient’s family members,” Faizan added.

One of the reasons that doctors suggest for such behaviour from the public, is one consistent weak medical infrastructure in public hospitals. Metropolitan cities like Delhi are a brutal example of what weak medical infrastructure looks like where the government came to power flexing their health policies. Up very recently, a report published by a journalist brought the very issue of ‘obsolete machinery’ lying in the government hospitals into the limelight.

A doctor from Delhi’s government hospital, in case of anonymity, talked to Mojo Story and told how he was treated with highhandedness by the hospital authority when he tried to talk about the year-old types of machinery lying dead in the hospital.

“A few months back, when I was actively tweeting for the machines issue. It got troublesome for me as my hospital was coming in a bad light due to it, so I had to delete the tweet, etc

From then onward I skipped commenting on that issue.”

More than 80% of doctors in India are stressed out due to a variety of factors including violence against them, harassment by police and politicians, long study periods, a lack of personal or social life, and so on.

In India, the perpetrators of violence are mostly patient relatives, unidentified sympathizers, criminals, and even politicians.  In India, the government only covers about 33% of healthcare costs, with the remainder funded by patients. Poor quality healthcare in the bulk of the government sector, and the influence of the media are all factors that contribute to violence.

The mob vandalised the entire house of Dr.Gourab after the allegations of he not helping a heart attack patient. 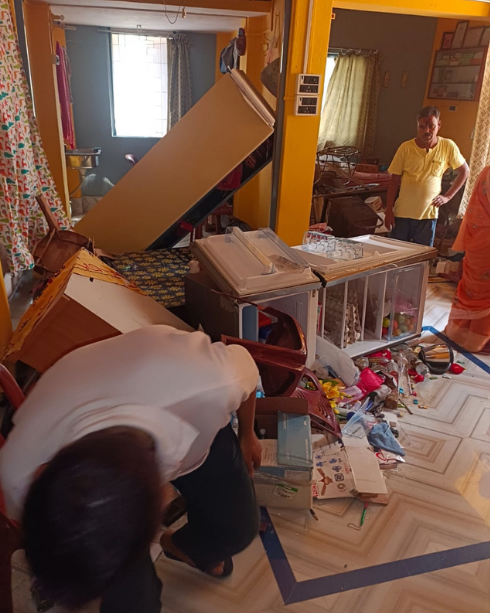 Verbal abuse, physical violence, mob lynching harassment, and other forms of violence against doctors are all possible.