How women from Bihar tackled COVID 19 by building food systems 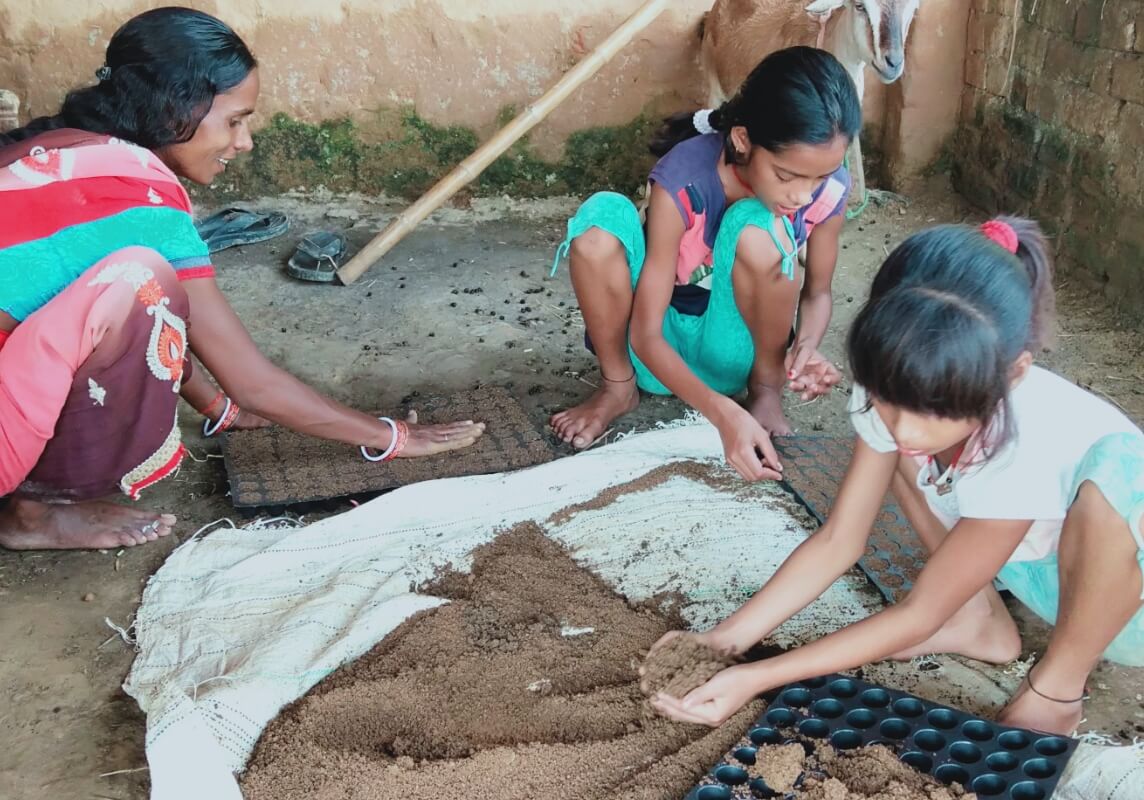 By the autumn of 2019, Veena Devi and her neighbour Reeta Devi, finally convinced their patriarchal families to dedicate a small portion of their land for an organic kitchen. Up until now, both their families had been practising chemical-based farming. “My husband had apprehensions about organic farming.

Isiliye thode se zameen se hi pahle shuru kiye. (Someone told me that due to chemical fertilizers cases of cancer were on the rise in Punjab. The state had run a cancer train. I was of the mind that at least not for selling but prioritising the health of the family, I convinced my husband to let me begin it from a small plot of land.”

After multiple rounds of conversations with their families, both Veena and Reeta readied a plot of 20 feet by 20 feet. They began it just as a pilot, with only three vegetables namely brinjal, radish and tomatoes. Bihar Rural Livelihoods Promotion Society locally known as Jeevika, helped these enthusiastic women with native seeds that are adaptable to local climatic conditions. Jeevika also guided them with the knowledge required for organic gardening.

With the announcement of nationwide lockdown in March 2020 came a turning point. The country had imposed a strict lockdown with most of the industries, construction work, and other daily wage work in urban centres coming to a halt. “I was stuck in Delhi. Factories had stopped working, many of us were rendered jobless.

The only priority then was to get back to our villages,” says Ranjit Thakur, Reeta Devi’s husband. “I might have faced difficulties while in Delhi but once I was in Dhand I never had to think what I would eat next evening. The one initiative (referring to his wife’s initiative of organic kitchen garden) that helped us not only survive but also ensured income during lockdowns,” says Ranjit thanking her wife.

It’s a known fact that daily wagers and farming communities which were largely engaged in the unorganised sector were worst hit by the pandemic. Not only the migrant workers like Ranjit but also the farmers, due to the halt of supply chain and closure of markets incurred a loss of income. 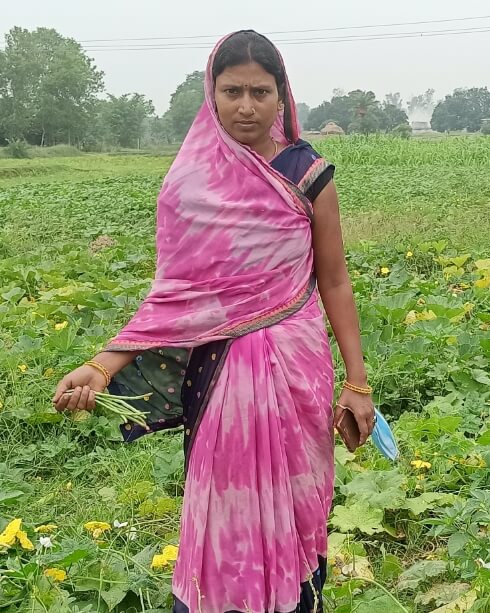 “Sabka kaam band tha. Aamdani nahi thi. Toh humlog tay kiye ki jo bhi kitchen garden se upaj hoga, usko aas-pados me baatenge. Kisi ko bhook se marne nahi denge” Most of the families had lost work and income. Hence, we decided that we would share whatever produce with our neighbours and ensure that no one dies of hunger.

By the time India went into full-fledged lockdown, women who had taken up organic kitchen gardening both on a small and relatively large scale had started producing vegetables as much as to feed their families. Soon in a few months into the pandemic, they were growing over a dozen varieties of crops and vegetables and were able to easily sustain their families during the pandemic time despite the loss of livelihood.

“On one hand, farmers were struggling to get fair prices for our crops as the supply chains were badly hit. On the other hand, women organic growers from Dandh, Mohanpur and Tari Dabil village in Jamui resolved to take up the task of feeding impacted communities,” Vikas Kumar, a resident of Tari Dabil says stressing the need to address the exemplary relationship between communities. “By feeding each other we stood up to each other in adverse situations,” added Vikas, also expressing his disdain for cities that could not hold the migrants for a few months.

Once the work of kitchen gardens picked up, “the jobless husbands who once objected and raised eyebrows too started actively participating in kitchen gardens and started co-operating more than ever,” says Seema Devi with a witty smile on her face.

Despite India being one of the largest producers of food, the country is also home to one of the world’s largest undernourished populations. India’s position on Global Hunger Index 2021 dropped to 101 from 94. Food and nutritional security continue to be a matter of premiere concern for India.

According to the Review of studies examining the link between food insecurity and malnutrition by the Food and Agriculture Organization of the United Nations, food security is directly associated with undernutrition in children in middle-income countries like India. Another study, Food security and the 2015–2030 sustainable development goals: From human to planetary health: Perspectives and opinions, also concludes that undernutrition or stunting is a consequence of household food insecurity.

As much as this is alarming, it also highlights decentralizing the available knowledge and methodologies to address the concerns of food security in the country, and experts believe that the experiment initiated by women in Jamui may be one of the indigenous answers to ensuring food and nutritional security in India. More than 150 women, mostly from the underprivileged background, is an example of how the country can prepare an adequate environment for sustainable agriculture from the already existing traditional knowledge.

The nudge to start organic kitchen gardens might have started from the aspect of health but experts suggest, “Kitchen gardens easily meet the balanced dietary requirements of rural households as well as add substantially to the family income.”

Kitchen gardens also have peculiar benefits for women in general. “Micro kitchen gardens save women from harsh manual fieldwork. For pregnant women and newborn babies, these kitchen gardens become the source of a nutrient-rich diet, that has the potential to ensure the food and nutritional safety of lactating mothers and growing children,” says Satyam Verma, a research scholar from the Physical Education Department, Banaras Hindu University (BHU).

“These Organic Kitchen Gardens add diversified vegetables, fruits and leafy greens in the food baskets of the most vulnerable and nutritionally challenged families of small and marginal women farmers.

The University of California in research titled, “Urban food gardens: the potential for climate change mitigation and adaptation” in 2014 concluded, “Food gardens have the potential for mitigating climate change by reducing the greenhouse gas emissions per unit of produce consumed and potentially reducing other sources of greenhouse gas emissions, as well as helping households and communities adapt to changing climate, economy and society.”

Their model also suggested that reductions in the greenhouse were primarily due to the replacement of chemical fertilizers and machinery, avoiding emissions from inputs of treated irrigation water, by composting household organic food and using the product as the nutrient input for the garden, among many others. The research also suggested that the governments include support for the food gardens as part of climate mitigation and adaptation strategies, and for households and communities that want to contribute to addressing climate change. 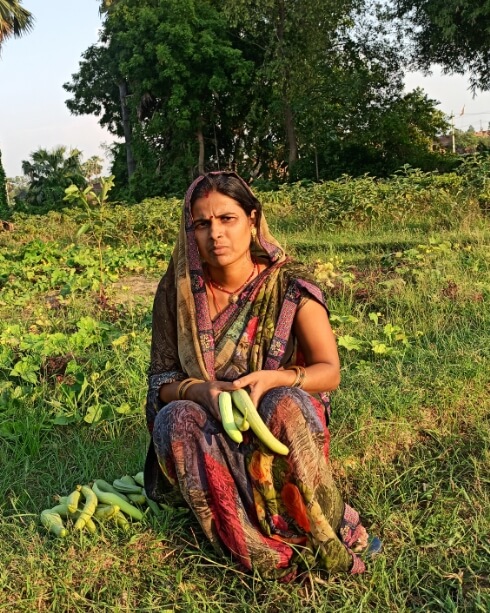 Kautilya Kumar, Livelihoods Manager with Jeevika Jamui also highlights the climatic importance of the work the women in eight villages of Jamui have begun, “Firstly, most of the families engaged with organic kitchen gardening belong to poor and underprivileged castes, many of which have also been landless farmers.

The poor are worst impacted by climate change, as we all know. Second, the seeds used in these gardens are conserved by the tribal communities. These seeds are native and adapt according to the soil and local climatic conditions. Third, the farming practice itself lays importance on using cattle dung and emphasizes poultry.

Fourth, most of the crops grown in the gardens are vegetables, fruits and species that are rich sources of multi nutrients. Fifth, the kitchen gardens focus to make the households self-dependent, so that they grow the essentials for self-consumption. It addresses food sovereignty as well as the local economy.”

Ishteyaque echoes with Kautilya and adds, “Organic kitchen gardens naturally quarantine pests and diseases reducing the need for pest control. It makes sure that adjoining plants complement each other in nutrition and moisture management in the soil.

Mulching and biomass-based fertilisers add up Soil Organic Carbon (SOC) which in return boost absorption of atmospheric carbon and minimise emissions from the farms. Such farms are greatly helpful in groundwater recharge and maintaining the soil temperature and moisture, making crops more resilient against erratic temperature and rainfall patterns.”

Highlighting the need to scale up the kitchen garden initiative, he adds, “At least three state agencies are recently mandated to implement nutrition parks or gardens under programmes including Mid-day meals, Integrated Child Development Services (ICDS) and rural livelihood development programme. So, technically there must not be any challenges in scaling up the kitchen garden throughout the state.”