Kashmiri Pandits Threaten A Repeat of the 1990 Exodus

Rahul Bhat’s assassination has sparked outrage, worry, and restlessness in the Kashmir Valley. Numerous rallies and marches have followed. Bhat, 35, was shot and killed by two Lashkar-e-Taiba terrorists last month while working at the tehsil office in Chadoora. This is just another instance of a series of attacks on minorities in the Valley which began last year. 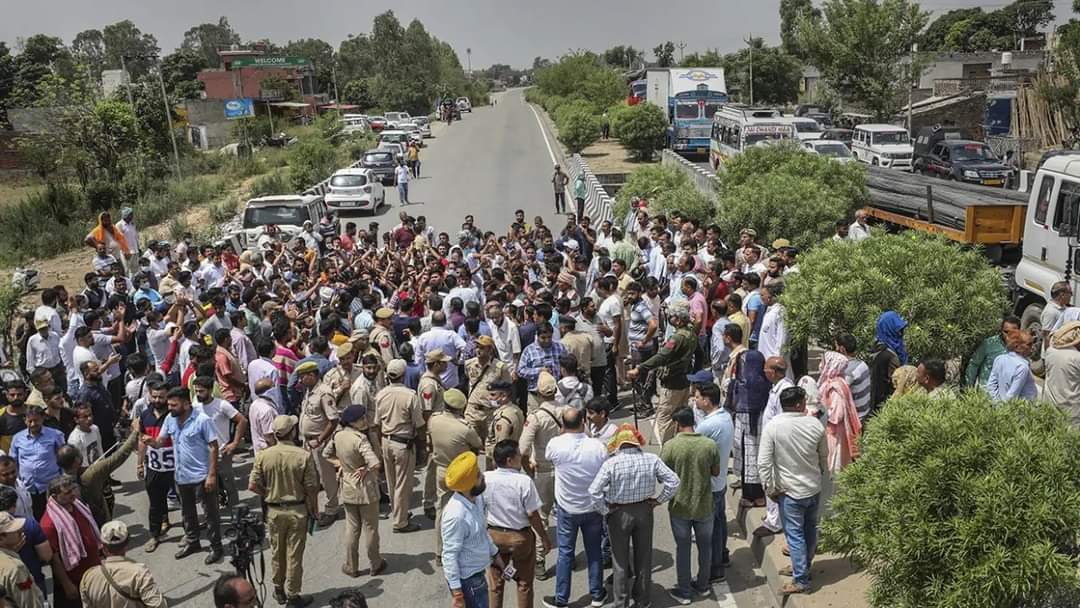 Members of the Teachers Association of Jammu and Kashmir block the Jammu-Pathankot highway during a protest over the killing of Government teacher Rajni Bala, in Samba.

Bhat was working as a clerk and was employed as part of a job package started by the government for Kashmiri Pandit migrants back in 2009-10. Bhat’s murder has sparked anxiety among the Valley’s Kashmiri Pandit population who flocked to the streets in Budgam, Anantnag, and Baramulla in a protest demanding assurances of their safety from the Centre.

“I won’t blame only the government for selective indignation; I’ll blame the entire country. Why isn’t there a single Indian Muslim, Hindu, or Sikh protesting on our behalf? All the viewers who watched Kashmir Files and cried about what we went through in the 1990s are nowhere to be found now,” a protestor said to the Mojo Story team.

The insurgency in Kashmir during the 1990s saw some 1,00,000 Kashmiri Pandits flee their ancestral homes and relocate to Jammu as well as other areas of the country. More than 800 Pandit families, on the other hand, chose to stay put.

As the fighting waned, the Manmohan Singh-led UPA government developed a special job package in 2010 for migrant Kashmiri Pandits who wanted to return to their homeland which saw 5,928 Kashmiri Pandits move back into transit camps in Kashmir. The package promised rehabilitation of returning Pandits, the financial incentive for self-employment in the valley, and 6,000 government jobs.

Rahul Bhat lived in one of these secure accommodations provided by the government. But his killing has raised questions about the ruling Modi government’s stand.

Kamal’s family spent almost two decades in the Batal Palian camp. His family recalled how they were homeless during their first three days at the facility only to receive a small tent without concrete support on the fourth day.

“I still remember how each family member used to hold one end of the tent in order to prevent it from flying off. I still remember the struggle to hunt down our utensils in the entire ground full of migrant pandits because it would get mixed up with others,” said Kamal while recounting the story his family has passed down to him.

Over the upcoming years, Kamal’s family disposed of their 3-storey-house in the Valley which had been dismantled. His family were unable to lease the house on rent or sell it off because of the condition the house was left in.

“We came back to Kashmir to find our roots, our house, and our village,” said Kamal, who has since returned to Kashmir in 2017 as part of the government’s job package program and now works in education. Before the relocation, Kamal told Mojo Story he was working in Jammu in a “safe environment and was earning well for his family.”

“You can get posting abroad but your soil will eventually pull you towards her,” said Kamal.

While the government promises secure accommodation, data shows that not more than a fifth of the 5,928 returning Pandits under the job package live in a secure area. The majority still reside in rented homes and one-quarter rooms – outside the shielded zone.

But, even among those who live within the camp, a large number don’t feel safe or have access to spacious accommodation either. Kamal claimed that the “safe accommodation” the government claims is mere talk. According to him, these accommodations are structurally weak and even a stone thrown at the building can cause damage. New families relocating under the government scheme now have to rent houses, as per Kamal. Several Pandits told Mojo Story that upto six families had to live in a single flat owing to the lack of accommodation and safety.

Amit, 35, is working for the PWD RNB department as a junior engineer since the early days of the government package was first executed. In over a decade since Amit has not been promoted or received a raise.

Pandits in the Valley said that they were promised in the job package that applicants will be promoted after 9 years of service by their departments. But, some like Amit have completed a decade or more, but promotion remains an unrealistic dream.

Pandits in the Valley spoke to the Mojo team and claimed that they were mostly promised district-level postings. Many of the employees said they upto 50 kilometres to reach their office.

Neeru Bhat, who stays in the guarded accommodation and works in the education sector, said, “To get to school, I had to travel more than 50 kilometres. When I’m in my house, I’m sure I’m safe, but what about when I’m outdoors till I get to school?”

As many as 14 Kashmiri Pandits and Hindus have been killed in Kashmir Valley since the abrogation of Article 370 by Parliament in August 2019, according to data presented by the Ministry of Home Affairs (MHA) in the Rajya Sabha. A report by the Hindu adds that since 2017, the number of minorities killed in the Valley in terrorist-related incidents stood at 34.

“We are bonded labourers with no promotions. Our juniors have become are bosses”

After more than 5 years in service, Kamal has yet to see a promotion and now works under those who joined much later, “The authorities have found flaws in the government orders which are called SROs. We are bonded labourers. Promotion policy was never in the picture, it’s the fault of the UPA government that such a bond was introduced.”

Kamal said while the Kashmiri Pandits were promised the world, the ground reality could not be more different.

“The killings of Pandits and the humiliation we feel when we see our juniors sitting on a higher post than us is actually heartbreaking,” said Amit. “Instead of promoting us, our department has promoted people who are 3 years junior to us. We have to address them as Sir. It’s like a slow death for us,” he added.

A Pandit employee in the education department confirmed that ‘no promotion’ or ‘promoting juniors to the higher position’ is seen across all departments and is a big example of the discrimination against the Pandits.

The Pandits have been protesting in the Valley for several weeks and claim to have given their mass resignation which has been denied by their offices/departments respectively.

The killing of Rahul Bhat was followed by the murder of a Hindu teacher, Rajni Bala, who was shot dead by terrorists right outside her school. Protest erupted soon after with government employees hitting the street in the J&K capital of Srinagar.

The employees gave an ultimatum to the government of 24 hours seeking an answer from them. “Relocate us to Jammu or face mass migration from the Kashmiri Pandits,” said one Kashmiri Pandit protesting. The community has postponed its plan by one more day as they wait for the government’s decision on their demands.

“Our representatives in Delhi have received an invite from the PMO and they are going to be there. We are expecting a response by 5ish in the evening. If not, the valley will see a mass migration (again),” said another Kashmiri Pandit.

Kashmiri Pandits have been locked from outside their societies allegedly by the government authorities followed by a heavy deployment of forces.

Meat Ban in Delhi: What Does It Mean For The Shop Owners?
SSC GD Candidates Detained in Agra, Prevented From Marching To Delhi