Empty Promises? Why these Labourers in Delhi Are Fighting An Uphill Battle

Parmod Kumar Mahto was waiting outside Haiderpur Badli metro station in a brown woollen cap with a blue strap, holding a cyan bag. His eyes fixated on the construction site nearby. Parmod, a 48-year-old electrician, used to work on this site and has been chasing compensation promised by the Delhi government. 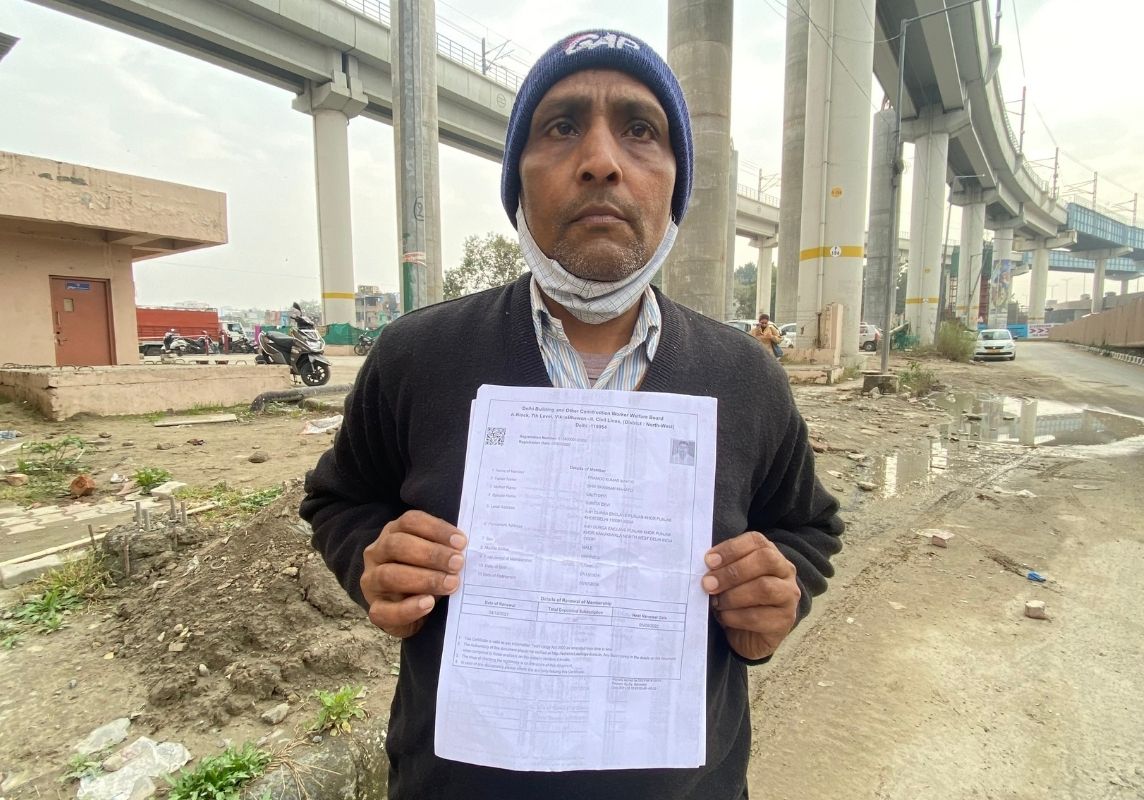 “I was working as an electrician at the building site when the Delhi government halted the construction,” he explained. “I’m still waiting for my compensation of 5,000 rupees.” He took out copies of his labour card and the bank’s passbook and handed it over to us, “Take a look yourself, I didn’t get a penny from the government. Previously, I assumed that my first bank had merged, which is why the process has been delayed, but now I’ve opened a new bank account with Canara Bank, and still…”

In November 2021, the Supreme Court ordered the Delhi government to shut down all the construction activities to curb the pollution levels in the city. “We re-impose the ban on construction activities in the NCR subject to the following two conditions,” a bench led by Chief Justice N V Ramana and Justices D Y Chandrachud and Surya Kant had said.

Non-polluting construction activities, such as plumbing, interior decoration, electrical work, and carpentry, were permitted to continue. States were asked to use the funds collected as labour cess for the welfare of construction workers to provide them with subsistence during the period during which construction activities were prohibited, and pay the basic wage notified under the Minimum Wages Act for the respective categories of workers.

Parmod, who is one of them, has to sometimes engage in other works which are par his expertise, “I barely get work now, so sometimes I load fruit and vegetables into trucks in Azadpur Mandi.” 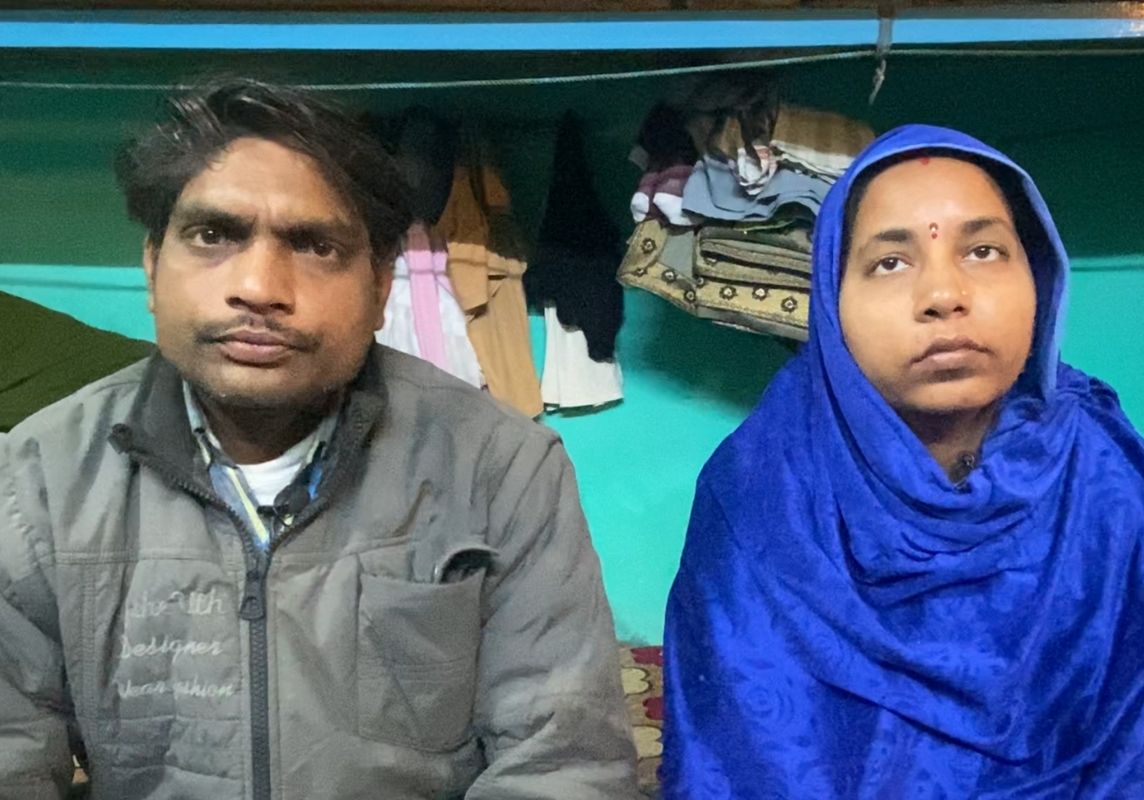 Trilochan and Rajkumari, a married couple, have been working at construction sites for ten years just like Pramod. Trilochan tells Mojo that he worked as a mistri (mason) and Rajkumari worked as a beldar (Labour) while the crew drove to their home in a congested alley in Ambedkar Nagar, Haiderpur Badli.

Trilochan tells Mojo Story that his family of five, with two children and his father, has been severely affected by the abrupt stoppage of construction work. His top priority remains to provide a satisfactory education for his children, and the compensation would be immense for just that, “When work was halted, I got a loan of Rs. 15,000 from relatives, which I am currently repaying. It will be a huge comfort for people like us if this administration gives recompense.”

Rajkumari, his wife, bemoaned the fact that during and post-Covid-19 lockdown, her children’s education had shifted online. The increased cost of internet packs has also burdened her household. “For others, this sum may be small but for us, this is beyond our reach, we at least want to pay for our children’s online education.”

Rajkumari told us that her daughters are in gift and sixth grade older at nearby government school, “We spent 700 rupees to recharge the internet on our phone for our children’s education. Now because both of our children’s online classes are at the same time, we are obligated to purchase a new phone; otherwise, we will have failed in our parental duty. This additional expense subsided our other essential needs.” Rajkumari falls silent and shifts her gaze from us to the vegetable basket.

Madhvi, a member of the non-governmental organisation (NGO) NIRMANA, which advocates for the rights of construction and domestic workers, chastised the government and the labour welfare board for their lack of concern for workers. “The figure of INR 5,000 is arbitrary. According to the Supreme Court’s judgement, the government must pay compensation in accordance with the Minimum Wage. If we calculate the compensation based on the minimum salary, the total amount would be more than INR 15,000.”

Manish Sisodia who is also the minister-in-charge of the Delhi Government’s labour department announced the increase in minimum pay in November. According to the notification, the monthly minimum wage for unskilled workers increased from Rs 15,908 to Rs 16,064, while the minimum monthly wage for semi-skilled workers increased to Rs 17,693. The monthly wage for skilled labour has been hiked to Rs 19,473. Unskilled, semi-skilled, and skilled labourers earn Rs 535, Rs 589, and Rs 649 a day respectively.

She also asked the government how all workers could be compensated equally, adding that a further classification according to skill levels of workers is also required. 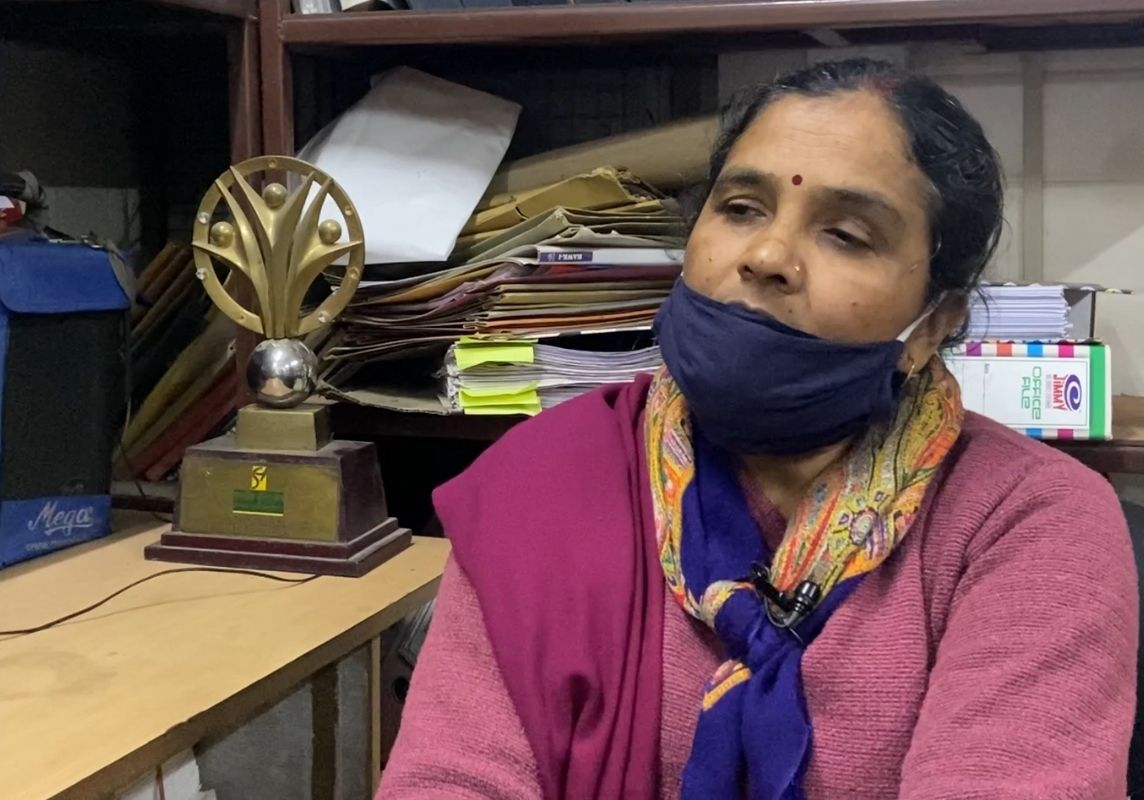 She further stated that the Delhi government has introduced a self-certified system this time, which is so simple that anyone may register as a labourer. “In two months, six lakh labourers register, which translates to ten thousand every day,” she said. “I’m not sure how this is possible. The process is such a farce,” she claimed, emphasizing that she could even claim the compensation if she wanted to despite not being a skilled worker.

Mojo Story was unable to provide the government’s perspective in this post due to a lack of communication with them. As the team receives responses to its questions, the story will be updated.

NEET PG Counselling: Why Did Thousands of Doctors Decide to Protest
The Timeline and Narratives of Jahangirpuri