“A man is known by the work he does. And my family has been manual scavenging for the last 70 years, so that is how we are known” said Abdul Javed. Until 2013, the 45-year-old was also forced to earn his living through manual scavenging, like his father and other ancestors before him. In the many decades he has seen and been involved in manual scavenging, he has lost count of the number of people who have lost their lives. “We don’t just enter manholes and sink pits but we have to go deep into its bottom to clean it. The second you enter the tank, toxic gases and fumes hit us,” Javed said. The Gulbarga (officially Kalaburgi) resident, however, is not alone here. 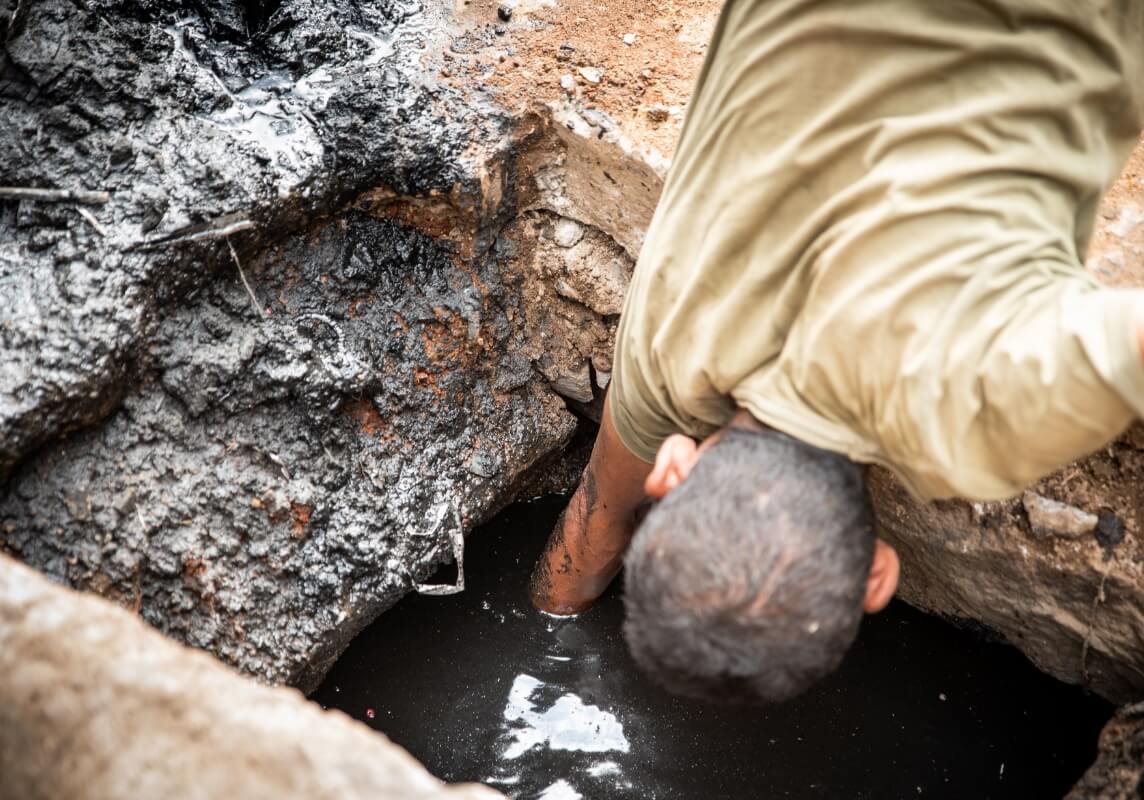 Nearly 1000 families in Gulbarga — all of them Valmikis (Scheduled Caste), Muslims or Dalits — have been working as manual scavengers for generations. Despite laws banning this practice and technological advancements in gadgets to clean drains, manual scavenging is still an active practice that is still taking the lives of many men from marginalized communities.

This is precisely why safai karamcharis, activists, labour union members, lawyers and many civilians were enraged when the central government, on August 5,2021, claimed that no one succumbed to manual scavenging in the last five years.

“Not just in Gulbarga. In Kolar, Raichur and many other districts of Karnataka itself many have lost their lives to manual scavenging in the last five years and the years before that,” slammed Javed. “Just earlier this year, we lost two men who were forced to clean a septic tank right here in Gulbarga,” he added. Javed is referring to the deaths of Lal Ahamad and Rasheed Shaikh.

In late January, Ahamad and Shaikh, along with another person named Raja Ahamad, were called to clear a manhole by a supervisor with Karnataka Urban Water Supply and Drainage Board (KUWSDB) According to an eyewitness, initially the KUWSDB officials tried to unclog the manhole with a machine. Upon failing to do so, the three men were summoned and ordered to clear the manhole manually. Despite knowing the risks with exposure to noxious fumes and the deaths it has led to previously, the authorities gave no gloves, masks or any other protective gear to the men. Shaikh had to remove his clothes to enter the manhole, in fact.

“Usually we are called to clean pits and manholes when there is something blocking it. We have to go deep into the hole to unclog whatever is stuck. Sometimes we have a stick, otherwise we have to use our hands. When we finally remove the block, a strong stench of rotten, poisonous gases just slaps our face. The smell makes our head spin and it feels like we will faint,” said Javed. This was what happened with Shaikh and Ahamad and left Raja Ahamad critically injured.

Legally, manual scavenging was outlawed as early as 1993 in the Employment of Manual Scavengers and Construction of Dry Latrines (Prohibition) Act. According to the Act, a manual scavenger is “a person engaged in or employed for manually carrying human excreta.”

Despite the Act prohibiting this inhumane practice, it has continued to exist and further diversify into more practices. “The most primitive way of manual scavenging is people carrying excreta on their heads to dispose of it. Then came the practice of entering manholes to clean them. 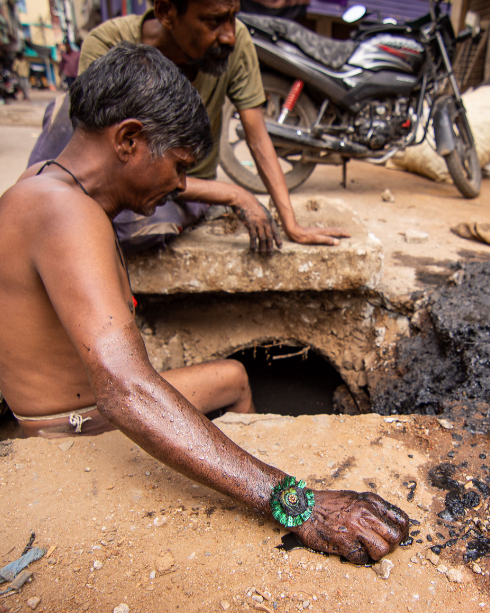 Even now, large parts of Karnataka have no underground drainage system. This means that each house — or a few houses together — have a soak pit or a septic tank attached to them. This needs frequent cleaning so manual scavenging happens there as well.

Lastly, some drains directly connect to open drains on the streets. So pourakarmikas (government employees who are tasked with sweeping garbage and cleaning the streets of Bengaluru) are forced to engage in manual scavenging regularly,” said Maitreyi, a lawyer and member of All India Central Council for Trade Unions (AICCTU)

Despite this legal framework, the ground reality is that this Act is rarely implemented properly. And often, the people employing manual scavengers are employees of government civic agencies like the KUWSDB, Bruhat Bengaluru Mahanagara Palike (BBMP) and Bengaluru Water Supply and Sewerage Board (BWSSB), among others in the state of Karnataka.

And incidents of this are as prevalent even in 2021. In February, Narayana,a pourakarmika from Maddur died of suicide. A few months prior to his death Narayan was forced by senior officials of Maddur’s Town Municipal Council (TMC) to clean a manhole and was not provided any safety equipment to do so. Furthermore, the authorities — a Chief Officer and Health Inspector — recorded a video of Narayana cleaning the manhole.

He tried to raise a complaint with the police against the official but his case was not registered. What followed this was several incidents of harassment and torture, which forced Narayana to take this extreme step. “He had apparently been hit once hard enough to make his ear bleed. Moreover, he was facing massive illegal deduction from his pay.

He was compelled to perform duties that normally required two workers.” reads a report compiled by AICCTU, whose members visited Maddur to understand the ground reality of what led to Narayana’s death.

In 2018, two daily wage labourers, Ramu and Ravi were asked to enter a drainage tank inside the premises of a hotel ‘Yumlok’ in the capital. They were given no protective gear and died within minutes of entering the tank and inhaling poisonous fumes and gases.

News reports say that Ramu and Ravi were pourakarmikas with the BBMP until a contractor took away their passbooks and ATM, forcing them to engage in manual scavenging to make ends meet.

Several incidents of manual scavenging deaths have preceded and succeeded this incident both in Bengaluru and the state of Karnataka at large. The situation is similar in many other Indian states as well. But from the primitive form of manual scavenging to what it is today, one thing remains constant. Caste. “Manual scavenging is a caste based, caste hierarchical occupation. 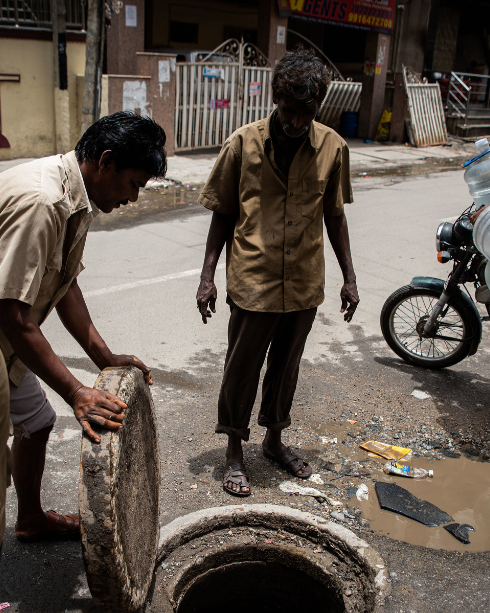 “The statement by the government on no manual scavenging deaths doesn’t hold true for any part of India, particularly Karnataka. These are not just accidental deaths, they are murders. When you put somebody in this position, knowing the risks attached to it, then it is murder.”

This degrading work is always done by people belonging to Dalit communities and that has remained unchanged till now,” asserts Maitreyi. India’s society has been entrenched in the caste system for time immemorial. Despite several legal and social measures in place to curb it, the caste system flourishes and shows the deep divide in power and ownership of resources in the country. According to a report by Amnesty International, there were 40,000 incidents of caste based violence in India in 2016 alone.

This is especially conflicting because the Union Ministry of Social Justice and Empowerment revealed that between 2016 and 2019, 282 people had died of manual scavenging. This reality has only been further exacerbated by the Swachh Bharat Abhiyan. Prime Minister Narendra Modi’s ambitious ‘Clean India’ (or Swachh Bharat) mission allegedly built over 100 million toilets in the country and claimed to be ‘open-defecation free’ as of 2019. But a further probe into the mission shows a different reality.

Titled ‘Health, Safety and Dignity of Sanitation Workers: An Initial Assessment,’ this report was published in 2019 by World Bank Group, World Health Organisation, International Labour Organisation and Water Aid. The study shows how a lot of toilets built in this scheme still depend on human beings to empty and clean up fecal matter. “The basis of the Swachh Bharat Abhiyan is on the presupposition that somebody will come to clean your excreta,” adds Maitreyi. “The everyday indignities of the people performing this work is never noted for.”

This has only furthered the plague of manual scavenging in this country, ostracizing already marginalized communities. “Our plight is given attention only when one of us dies. Even then people forget us very quickly and our lives remain the same,” said Javed. While working as a manual scavenger, he faced large amounts of discrimination and untouchability.

“In hotels people will give us water from the balcony so they don’t have to be near us. When we are standing in public, people will ask their children to not stand near us,” he added. Despite getting his three daughters educated, he knows that when it comes to marrying them, they can only marry men from communities engaged in manual scavenging.

Resolved to end this humiliation, Javed and his wife Farzana Begum decided that their family would no longer continue this occupation. “We decided even if we die of hunger, we won’t resort to cleaning excreta. In 2013, I got help from the government to buy an auto and that is how we have been making ends meet,” informed Javed.

But despite moving away from the occupation, his family is treated the same. “What does it matter if we do this work or not? In society’s eyes, our identity is always that of people who clean their shit. And that is how we will always be seen.”

All images used are for representational purposes

“Don’t Treat Us Like Gods” : Inside Growing Violence Against Doctors
‘Badlav Didi’: A Women’s Group in Rural Jharkhand is Improving Access to Justice