Mundka Fire: Building Had One Exit Route, No NOC, Among 27 Dead

In the unusually congested district of Mundka, one could observe a four-storey structure in disarray — burned to ashes, shattered glass windows and a heavy police presence. 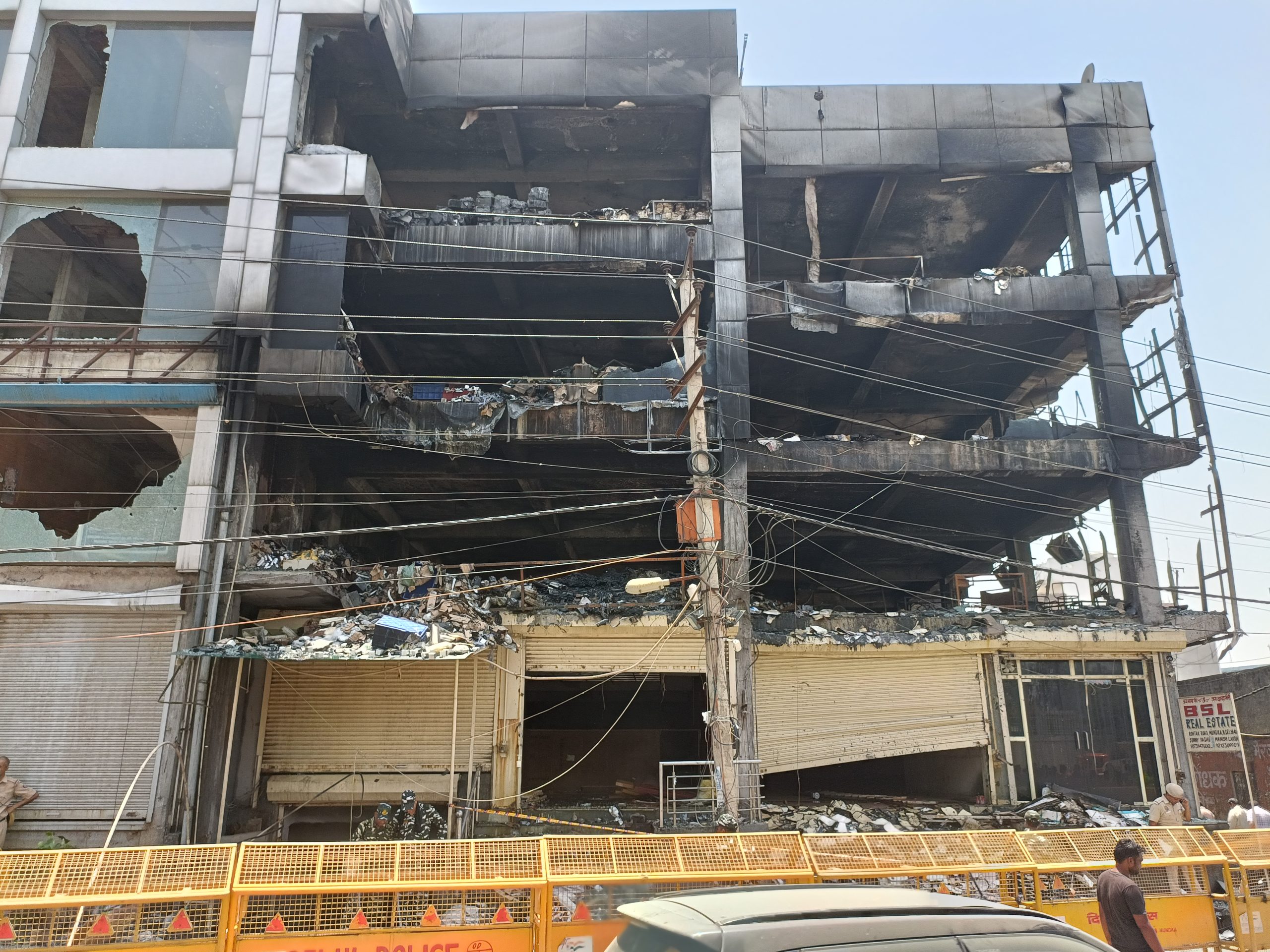 The 4-storey building which has been burnt down to ashes has been barricaded.

A four-storey building owned by two brothers, Harish and Varun Goyal, was located in an exclusively industrial neighborhood, approx 200 meters away from the Mundka metro station. This was a showroom where CCTV cameras and wifi routers were sold, among other things. According to one of the company’s workers, the shop had at least 250 individuals who worked in various areas such as sales, marketing, and technology.

A fire broke out in the building on May 13, 2022, at around 4:30 pm, leaving at least 27 people dead, 17 injured, and many more feared trapped under the debris. Many were rescued from the incident site and were taken to a hospital. For approximately an hour and a half, there was no assistance given to these people whose lives were being destroyed by fire.

Mojo Story attempted to question firm workers about the cause of the fire who spoke to us on the conditions of anonymity. Manish, one of the survivors of the incident, who was present inside the office said, “We were all working until we got to know that there is some issue with the generator in the basement.”

He added that they normally have two guards in their workplace. However, no one was present yesterday, and the generator was left unattended with its switch on, “We only recognized this when a power outage occurred and a couple of us went down to find out what exactly had happened. When we opened the basement room, we saw that the fire had already started, and the flares and flames had spread to the other rooms in seconds.”

Despite the fact that this appears to be an accident, the facts leading up to it paint a different image. According to police records, this building did not have a fire NOC when the showroom was opened (A fire NOC from the local State fire service certifies that a certain structure is fire resistant or unlikely to suffer any fire-related accidents). 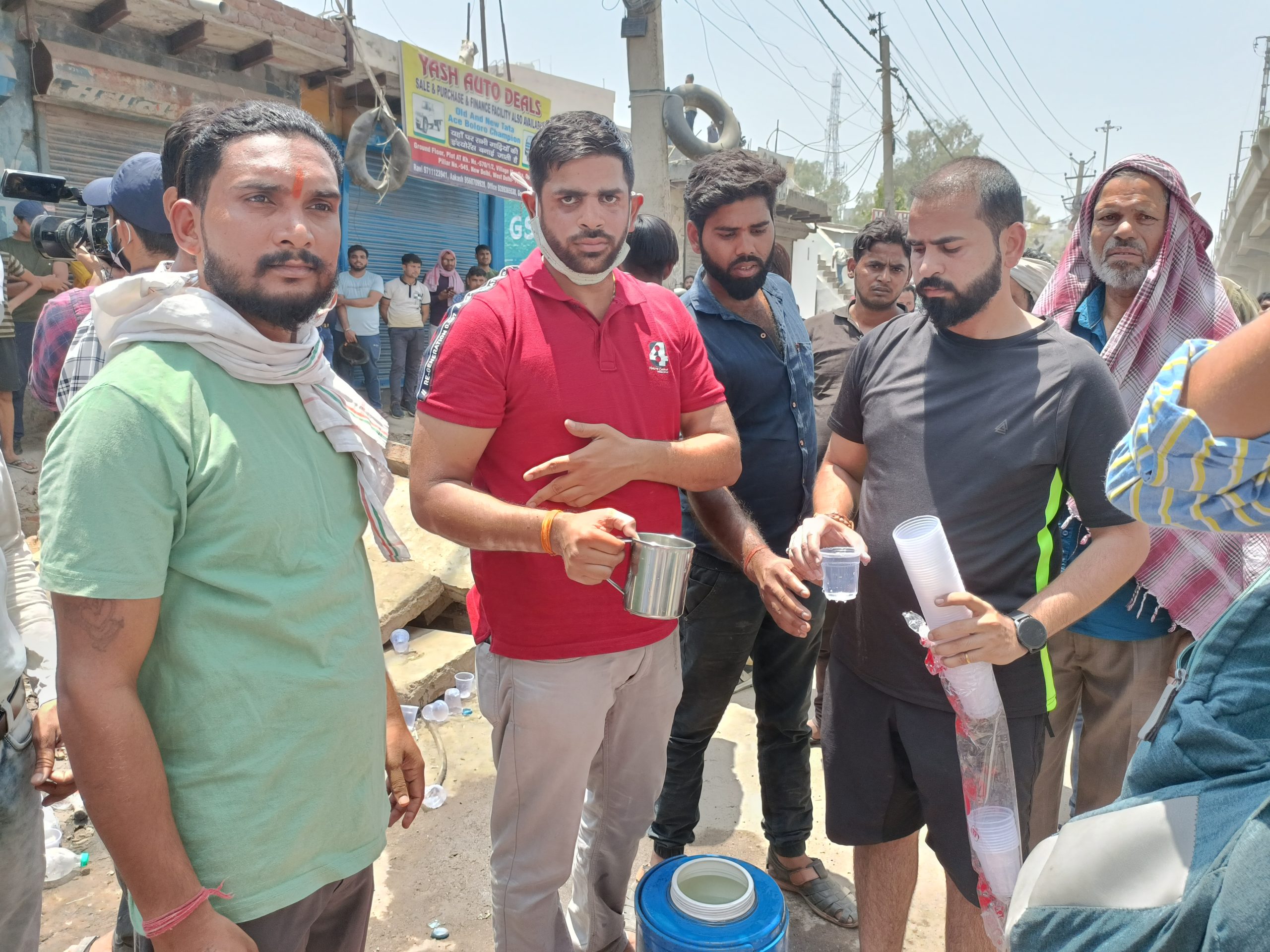 The locals who initially helped the fire stop, are now serving the media and police.

Another fire had broken out in the same structure 8 months before the incident. However, because it was only a wiring issue with a few sparks, the damage was minimal, and the owners took it for granted. Even without fire extinguishers, fire escapes, or fire-resistant equipment, the location was hazardous.

“This isn’t the first time something like this has happened in this workplace,” Akshay, a firm worker, explained. “There has been a significant level of ignorance by the management in this area. We don’t even have fire extinguishers inside, which is hard to comprehend. With such a setup, how can one survive in grave straits? Our owner slipped out of the crane that was brought in, trapping us all within,” he further added.

Another employee stated that when a fire broke out 8 months ago due to resembling sparks, they brought it up with the owners, but they ignored their pleas, “We are barely workers, our hands are bound. We could have lost our jobs if we had said too much about it. The fire department has visited our store several times to ensure that appropriate standards are met. They were bribed each time, and the working conditions deteriorated.”

According to Atul Garg, the director of the Fire Department, the building lacked enough ventilation and preventive measures — it has only one exit point and no fire escape alternatives. “The building was unrecognized, it was lawfully built at the time of zoning but did not fit the criteria as per the current sanctioned construction plan, rendering it unlawful,” a source from the administration revealed. 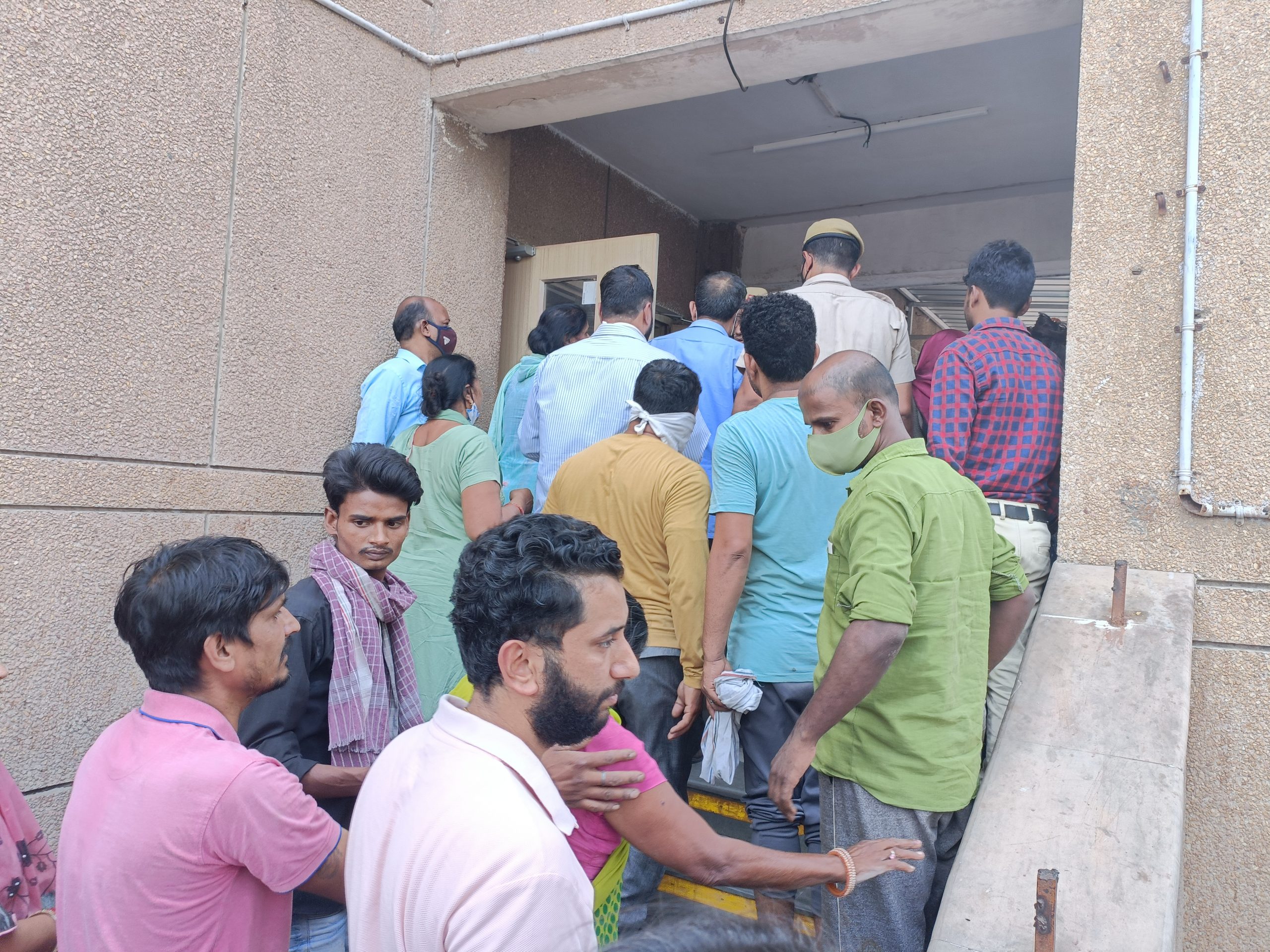 Police taking the families of the deceased for identification.

The Sanjay Gandhi Hospital in Delhi was besieged by the anguish of victims and their families as they awaited the delivery of bodies and the identification of their dear ones. From the building’s location to the Sanjay Gandhi Hospital, one could observe forlorn families desperately searching for their loved ones, unsure whether they are still alive and missing, or whether they succumbed to the fire incident.

Some people are still searching for their loved ones as 29 people are reported to be missing. Hans, Praveen Gupta’s cousin, who works there, claimed, “My brother was the family’s primary earner. He left for work at 10 a.m. last morning and has yet to return. We’ve been looking for him in every hospital and other facility in the area but  haven’t found him.” He added that no one listened to them in the hospital and mistreated them by giving them a blank stare or shooing them away, telling them to return in half an hour. 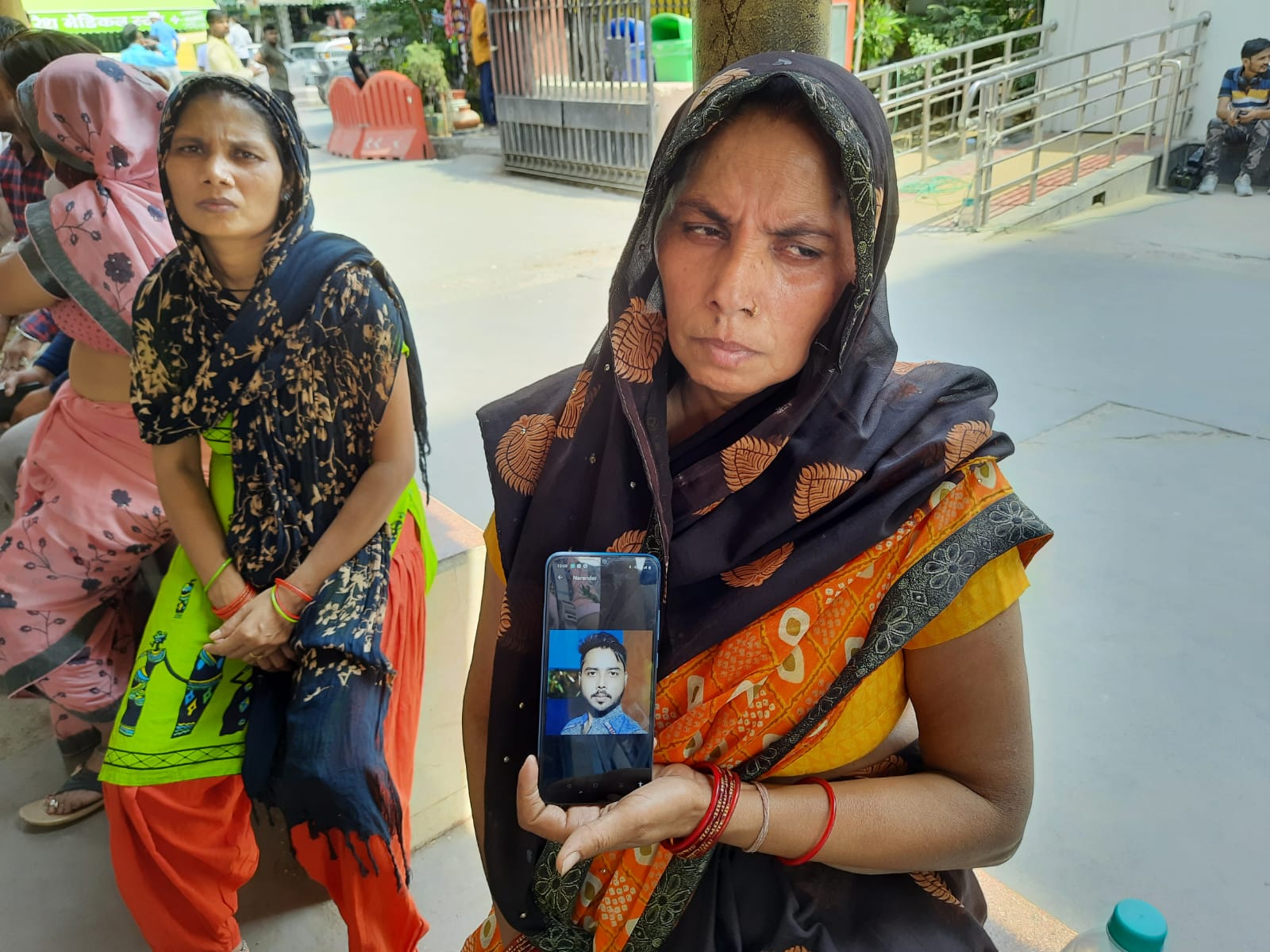 Gopal is still looking for his brother. His friends informed him that the entire building had been destroyed by fire. The crowded site, ashes, ambulances standing and chaos everywhere — this is what Gopal’s family witnessed when they arrived at the scene after hearing about the fire, “When we came to know that bodies and people who were injured had been taken to Sanjay Gandhi Hospital, we reached there to see a list of names who were working in the office building and were in search of their known ones, but I didn’t find my brother’s name on it.” 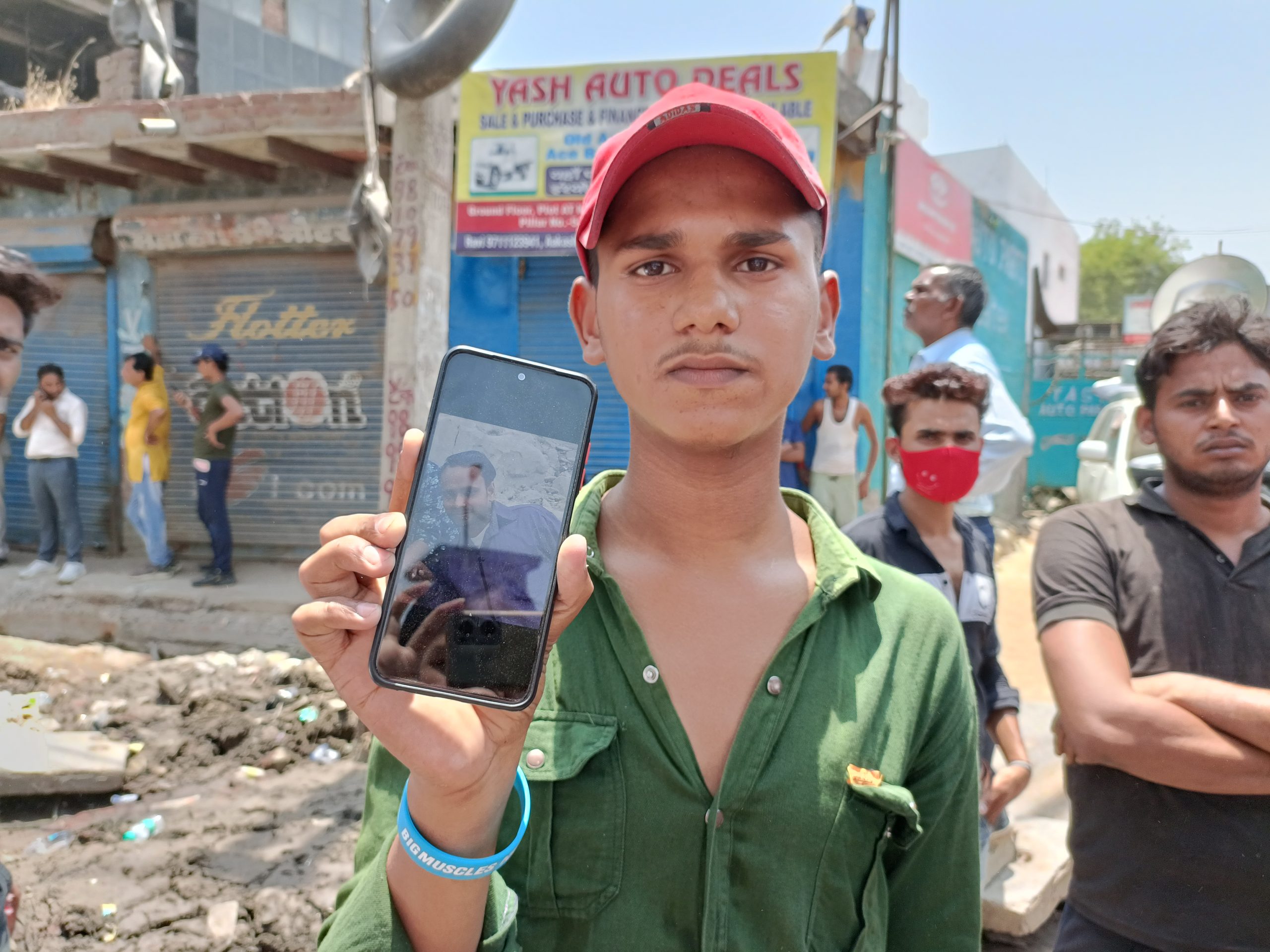 Hans carrying his lost brother's picture who has been missing since the day of the fire.

Some people were also able to flee the situation. Tanu is one of the fortunate employees who managed to escape the fire by utilizing a rope given by the community, “We were confined inside for at least an hour without any aid. Initially, those standing down merely flashed their phones at us and snapped our films; nobody seemed to care about our life. Glass doors cracked after a while, and our rescue operation began. My co-workers were huddled around the fire, helpless.”

Sonu, a sweeper at Sanjay Gandhi Hospital, described to Mojo Story the traumatic encounter he experienced while conveying the remains to the hospital, “Bodies were being hauled in like dead animals. Inside the mortuary, bodies were being deposited one on top of the other, each stuck by one or more body parts. I’ve never witnessed something like this before. It was all taking place right in front of my eyes. Some of them did not even come in entire forms, there were broken legs and hands with absolutely no evidence of identification on them.”

Harish Goyal and Varun Goyal, the proprietors, were arrested after an FIR was filed at the Mundka police station. A guest from Australia who was a motivational speaker by profession was also present in the building. He has now been identified and declared dead. 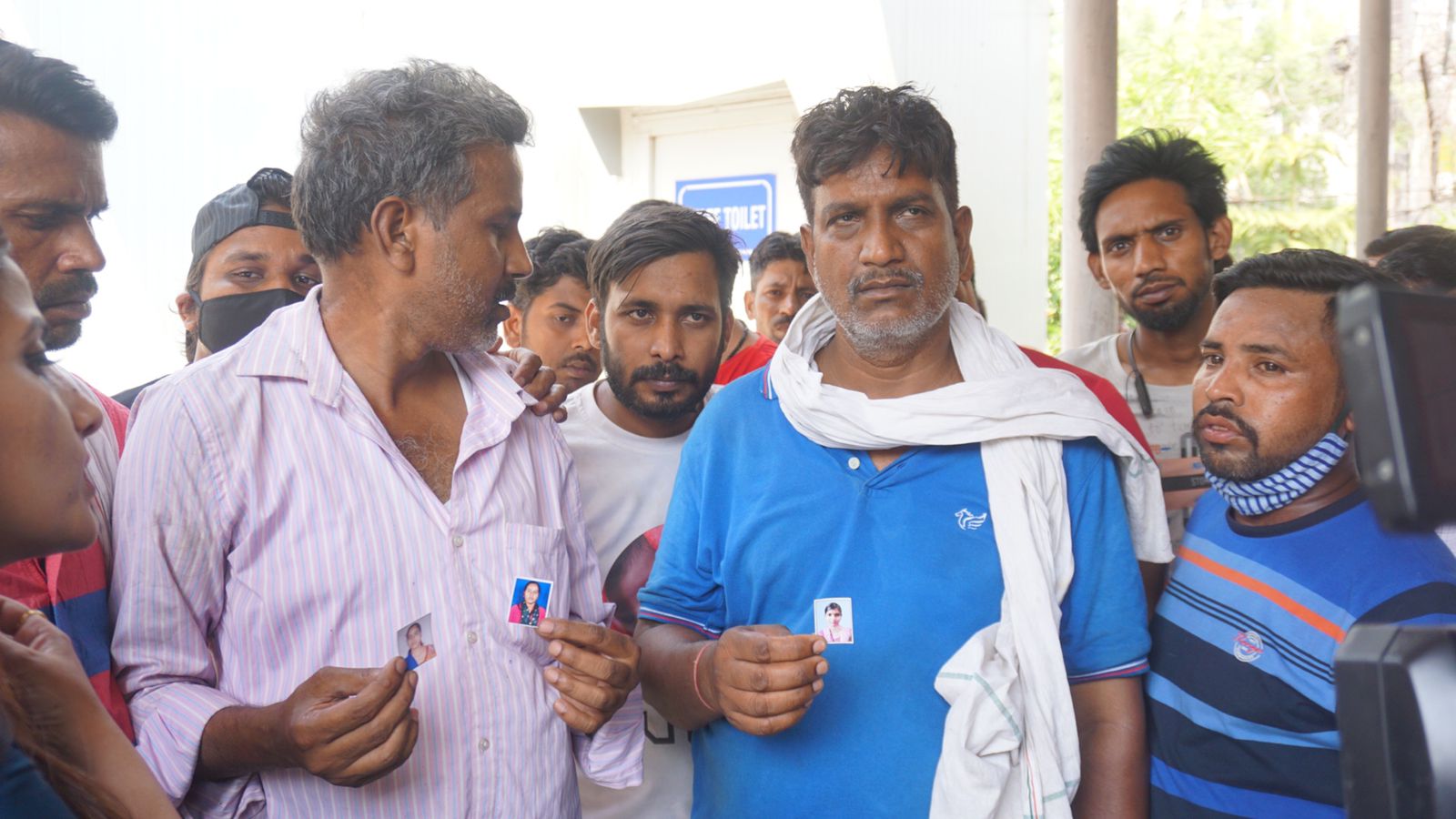 Two fathers sitting in hospital in search of their daughters.

Officials said that on May 14th, 2022, the North Delhi Municipal Corporation demanded a comprehensive report from Narela Zone officials, which contained the kind of area and approximate year of construction of the facility. Delhi CM Arvind Kejriwal and BJP MP Hansraj Hans arrived at the scene of the tragedy and promised to compensate the victims.

To these compensations, however, all of the victims had the same response — “No amount of money can bring back the lives of our loved ones. We only ask for one thing- please get a DNA test done as soon as possible and assist us in identifying the remains of our family members so that we can go ahead with their last rites.”