Poll Rigging In Favour of BJP By Outsiders, A Consistent Election Pattern?

On 23rd June 2022, Tripura saw by-elections in four Assembly constituencies of the State, where the ruling BJP won three seats, and the Congress gained one. What followed were charges of rigging by the opposition. 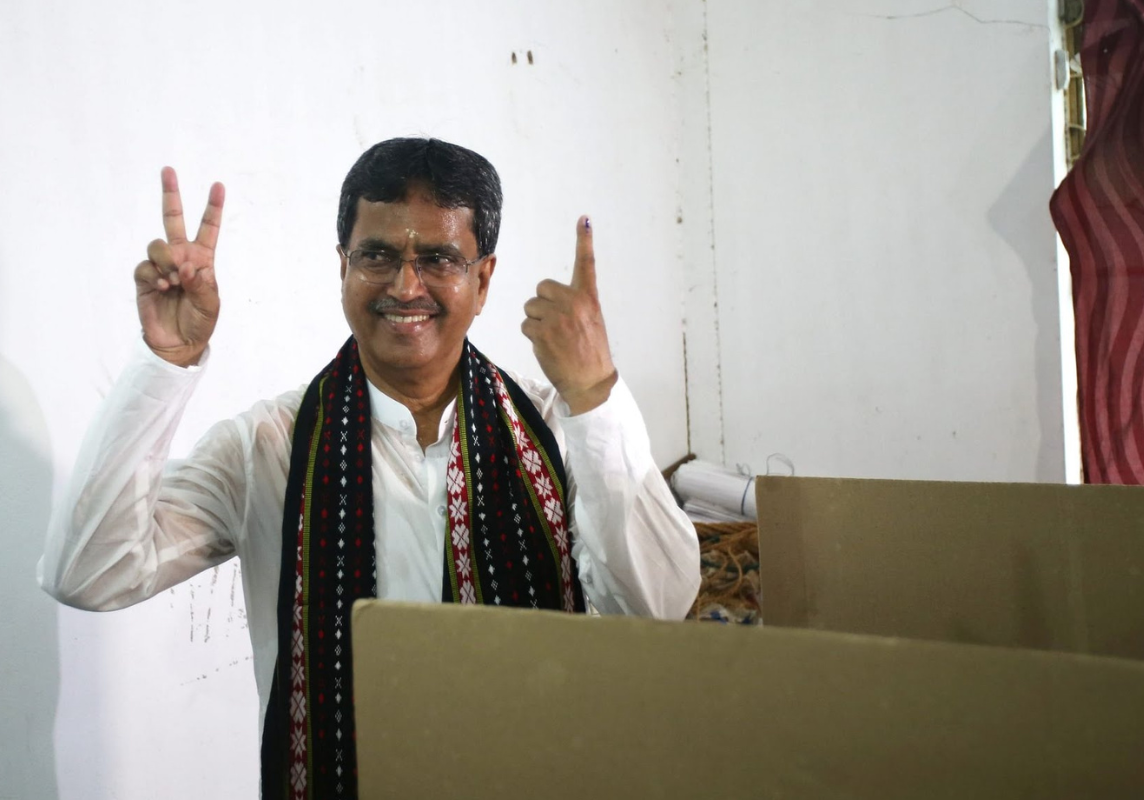 Tripura CM Manik Saha after casting his vote at Agartala

Tripura held civic elections earlier this year in November. Poll tampering has followed a similar trend in the State throughout the last two elections. The alleged target was the regions where there was supposed to be a neck-and-neck contest, the spots where the vote bank could swing in favour of the opposition, and the people participating in the rigging were outsiders.

“If the CM does not respond to these allegations, and the police do not investigate thoroughly, it would mean that it has all happened under the CM’s command,” alleged Aseem, a resident of Agartala, the place that saw maximum rigging in both civic and by-polls.

The current Chief Minister of the State, Manik Saha, fought from the Bordowali constituency and won by 17,181 votes. However, the Opposition accused rigging in all four seats, as it had in previous civic polls, with the Trinamool Congress calling it a “murder of democracy.”

The rigging pattern becomes more clear if one looks at larger-scale elections, which were the civic polls in November 2021 — Intimidation in local’s houses a day prior to the polling, threats to polling agents on the day of the elections, and vandalism of shops and houses post polling.

During the civic polls in November 2021, in 112 of the 334 seats that were up for election, there was no opposition; the BJP automatically won. These 112 seats were left uncontested, according to Jitendra Choudhury, state secretary of the Communist Party of India (Marxist), because “goons protected by the BJP forced opposition candidates to withdraw their nominations.” The Election Commission did not state why there were no candidates from parties other than the BJP when it nominated these 112 seats.

The presence of outsiders who are majorly responsible for the rigging and intimidation that happens during the election season has been reported from several areas in the State. “At least 7 days before the polls, BJP members were in the town. They put up either in Bhagat Singh Yath Hostel or in some BJP member’s house. Every night, post 10 pm, they would leave the house and go somewhere on motorcycles. We never had much clue about their whereabouts, but one thing clear is that they disappeared immediately post the elections,” said Biton Das, an eyewitness. 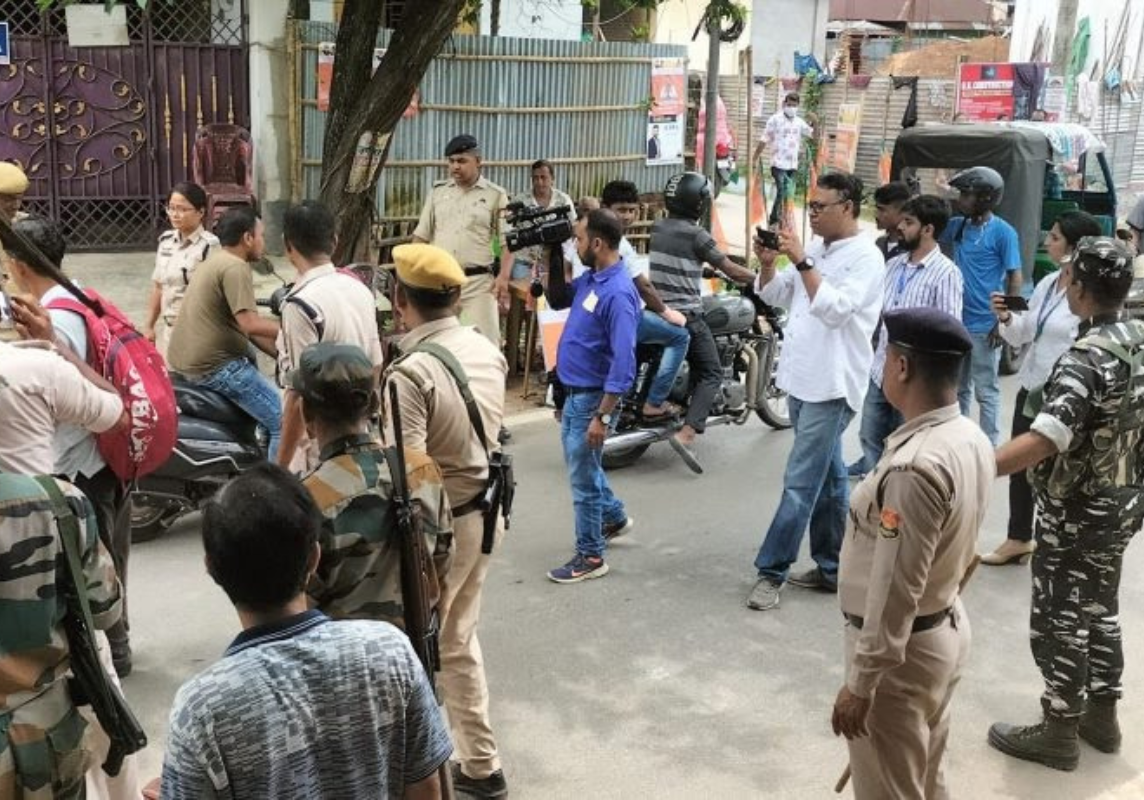 Presence of police personnel and paramilitary outside polling booths

Mojo Story spoke to a local renowned BJP leader as well, who requested anonymity. Denying all the allegations that had surfaced, he said,” We have been completely diligent in our work. The opposition needs a chance to malign our image. No outsiders were present during the elections.”

Answering the allegation of BJP members residing in hostels and other places, he added, “The only reply that the Opposition has against any landslide victory is stories. People did come from other States before the elections, but that was solely to serve the party, not to commit any crime.”

“I was threatened right before I entered the polling booth at around 6 am on 23rd June. They said they would not leave me if I stepped inside the booth,” said the 48-year-old Sankar Ravi Das, polling agent for CPI(M)(Communist Party of India Marxist), who was at the receiving end of direct threats.

Das alleges that a few local BJP workers threatened him as he entered the polling booth and said they would see him after the elections. He even recognizes these local leaders. Two of them, he says, live in his area only. Their names were Nihar and Ujjwal Chauhan, who, along with two others, were hurling slurs at Das and posing a life threat to him.

Later, once the polling was over, Das could see that men were ready outside the booth waiting to beat him up. He was hesitant to move out of the booth as he could hear them. Later, two squads of the Election Commission Officers in two vehicles escorted him home. “Had it not been for the officers of the election commission, I would not have reached home safely,” he says. Later, he could not move out of his house for 3 days until the results were declared.

However, the intimidation tactics and attacks did not stop here. Das ran a small business of seat covers and other materials for two-wheelers and four-wheelers. On 26th June, once the election was over, Das’s shop was attacked. “I received a call from one of my cousins late at night on the same day that the election results were announced, informing me that my shop had been burned to the ground. I dashed to the location of my shop only to discover that there was nothing left; it had all burned to ashes,” he recounts. He lost stock worth rupees 7 lakh. This was the only source of livelihood for the family of four.

Das says that he did register an FIR and mentioned to them his doubts about Ujjwal and Nihar being behind the crime but was not sure since he had not seen who put his shop on fire. The police are still investigating and have not made any arrests yet.

In another incident in the same area, another 60-year-old man’s shop and godown were torched. Gotom lives with his wife and runs a tent house business for weddings, festivals, etc. Gotom is a heart patient himself and has been undergoing a very expensive treatment from Kolkata. His shop, which was his sole source of income, was burnt down on the same night of 26th June. Gotom’s brother’s major concern was that Gotom has been an open supporter of the BJP for a long time, so why was his shop torched? His brother Shankar Shah says, “I think since the polling agent of CPM’s shop was just beside Gotom’s, the perps accidentally burnt his shop too — the shop which Gotom had rented out to a CPM’s polling agent has also been brought to ruins. That is a clear indication of why my brother’s shop was burnt.”

The very next day, the newly elected Congress MLA from the constituency Sudip Roy Barman along with other leaders of the Congress, visited Gotom and promised compensation to him. However, ever since, there has been no contact from the MLA or Congress Committee’s end.

The election commission claimed that apart from a few stray incidents in a few areas, the polls were peaceful. However, if one looks at the seats, capital Agartala seat, where the vote margin between the Congress candidate and BJP’s candidate was a mere 8%, maximum planned rigging could be observed.

Incidents have emerged where locals were given warnings on the polling day as well. They were being told that their vote had been cast and that their presence was not required. In another incident, a constable who was not in his uniform was also stabbed. He was rushed to the hospital and is still recovering.

“The opposition cannot face the results and hence is inviting goons to create mishap. We are not the ones to create these problems; it is them,” said Shah, another BJP leader.

We tried reaching out to different SPs of the area, but all of them refused to give any comment saying that the investigation was in process and that before a thorough investigation is done, they would not be able to respond to any allegations that have come up. The officer in charge of GB Top police station, the area where the shops were torched, unfolded a few facts. As mentioned above, opposition parties had been framing allegations against the ruling BJP. However, Rakesh Patari, the OC, denied saying that none of the names on whom they doubt has been mentioned in the police statement.

“Our investigation is on, and we shall reach a consensus only after we have conclusive evidence. Right now, it will be difficult to say that it was a political vengeance,” added Patari.

The investigation is underway, and the ambience of fear still prevails. In the case of last year’s rigging, in spite of concrete evidence, no arrests have been made till date. As far as this year’s incidents are concerned, the police have not found anything yet as the incident took place late night and the ones who even reached the spot it was only after the shop had already been torched.

‘Badlav Didi’: A Women’s Group in Rural Jharkhand is Improving Access to Justice
On the Menu. A Day in the Life of a Delivery Boy.