After Madhya Pradesh, Rajasthan, and 6 other states, it was in Uttarakhand where communal tension slowly unfolded.

On 16th April, Navneet Singh, the head of Bajrang Dal in Jalalpur reportedly organized a rally on the occasion of Hanuman Jayanti. It has always been a tradition to take out rallies in the village with an expected route but this time the rally ended up having different consequences. 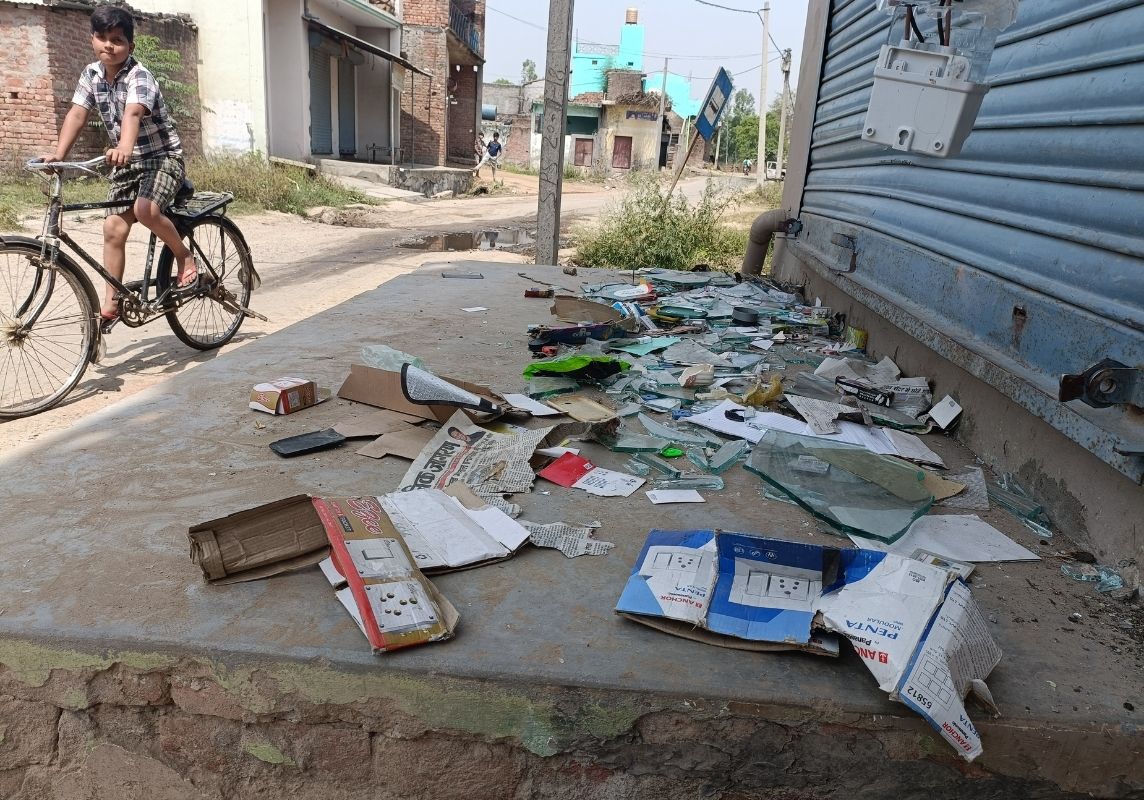 A few miles into the Muslim-dominated area, only a few of the families who chose not to leave the village were sitting in a circle right outside the lane of the Masjid where the violence broke out on April 16.

“Leaving us, most of our brothers and sisters (Muslim families) have left the village not because they have anything to hide or have done anything wrong but because they fear for their kids, forceful incarceration is on the majority side and they don’t want to see their house being bulldozed”, a Muslim local told Mojo Story.

Bulldozers reportedly were seen stationed right outside the Muslim lane on April 17, hours after a video went viral of Yatiranand threatening to bulldoze the house of Muslims and staging a Dharm Sansad.

“If the police don’t bulldoze the houses of Muslims in the next 48 hours, I promise that I along with my other members will stage a Dharm Sansad and nobody will be able to stop us”

The village is a Hindu-dominated region, which has a majority population of the Other Backward Classes (OBC) group Saini. This place had a considerable police presence after violence broke out between two communities. However, the desolate alleyways, where the bulk of Muslims live, tell a different story.

“We actually locked ourselves inside our homes after we heard that the people taking out rally had started burning, vandalizing, stone-pelting houses, shops, and other properties of ours”, another local interrupted.

“This isn’t the first time this rally has taken place here but the post-rally violence that we saw this year is menacing and unleashes a very different picture of people we have stayed with for years now. We never knew that our neighbours who we thought to be more than ‘Hindu-Muslim’ would try to attack us”, a 50-year-old woman told Mojo Story whose house was stone pelted by the rally. 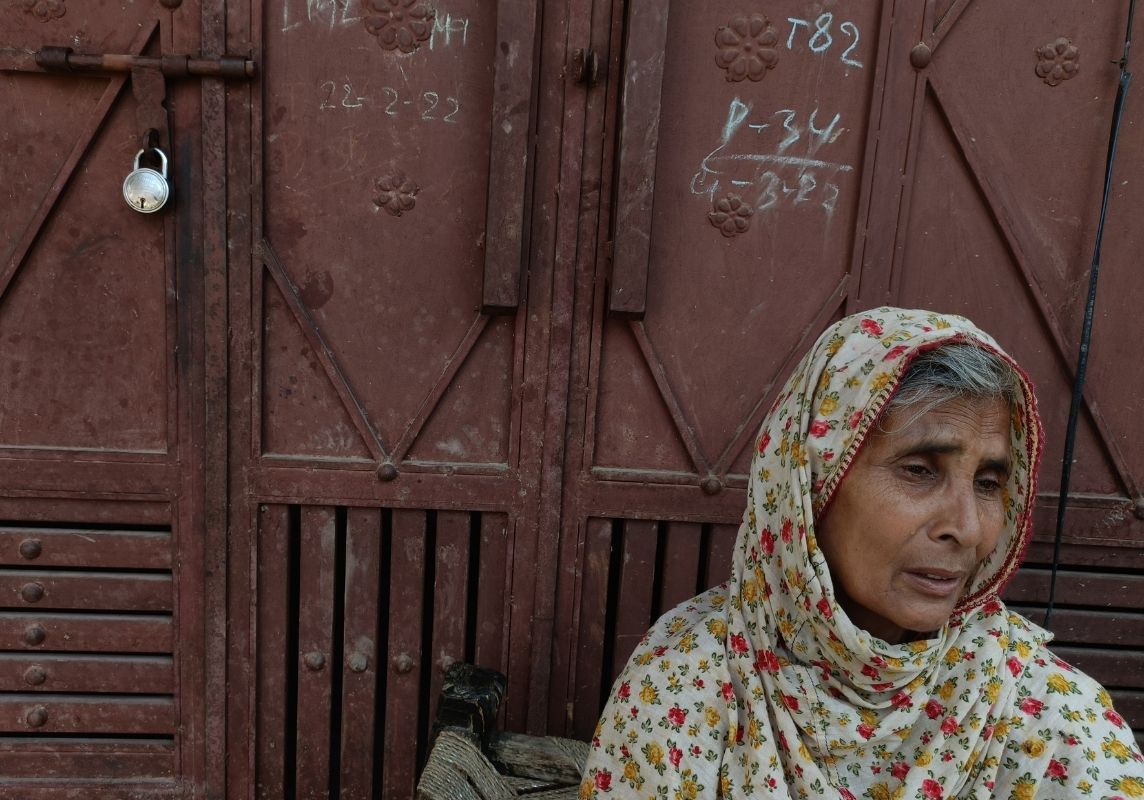 Starting from Yati Narsinghanand‘s inflammatory speeches against Muslims in Haridwar city to Yatiranand’s threat calls to bulldoze the houses of Muslims in Roorkee, the model of Dharm Sansads has triggered and sent fear waves across the country for the minorities especially. People in Dada Jalalpur feel no different, the video of Yatiranand warns the police to bulldoze the houses of Muslims or else they will stage a Dharm Sansad has led to panic among the Muslims.

We found the video of Yatiranand on almost every phone in the village. The Muslims are in a state of terror knowing what could unfold for them after the call for “bulldozing Muslim houses” has gone viral.

One of the locals who showed Mojo Story the video on his phone told us how illegal incarceration is not the only reason why most of the Muslims have fled the scene but this warning by Yatiranand has put people in a state of fright.

“All the things that happened on April 16, happened under the watch of police, so we can’t trust that if Dharm Sansad is organized and something like 16th April again happens, police will save us in any way”, one of the locals cried while saying it.

What exactly happened on April 16?

Residents of three nearby villages in the Bhagwanpur region, Dada Patti, Dada Hasanpur, and Dada Jalalpur, organized a parade for the celebration of Hanuman Jayanti on the night of April 16.

A swarm of young men brandishing sticks, playing loud music, and screaming communal slogans as they pass a mosque is captured on video and uploaded on social media. Locals mentioned “DJ tractors” in the processions, which are tractors equipped to play loud music.

As the procession went further down the village, video footage shows stone-pelting and mayhem. According to reports, ten people were hurt; however, the true number can be different.

Zareen, a 65-year-old who had sustained injuries on her head and elbow told Mojo Story that it was the Hindutva mob that started the brawl by stone-pelting

“They had the stone packed in the sack. They came here (Muslim area) and started pelting stones at us”

Recollecting the whole incident, Zareen said, “On the night of April 16, the rally came to our area. That was the time of our Iftari (breaking of fast). Our children requested them to not play loud music outside the mosque because of the prayer that was being offered. We also requested cops to intervene, but they remained silent. There was a large mob with heavy wooden sticks and swords among them and within a blink of an eye, I saw them beating people around me and then came to beat me up with sticks,” she explained.

“Dekho ji yaha ke Musalman ki Pakistani soch hai.” When asked if the Muslims stone pelted first and what exactly happened that evening, Aakash*, a Hindu man, says, “India-Pakistan ke match mein Pakistan ke liye cheer karte hai.” This Hindu man claims to have been at the rally and witnessed Muslims throwing stones at them as the rally moved away from their area.

Aakash said these Muslims who live in their area are extremist in nature. “The Muslims in the area have a major problem with the government in power, the Muslims wanted a Congress government, but it’s BJP in the ruling,” as alleged by Aakash. 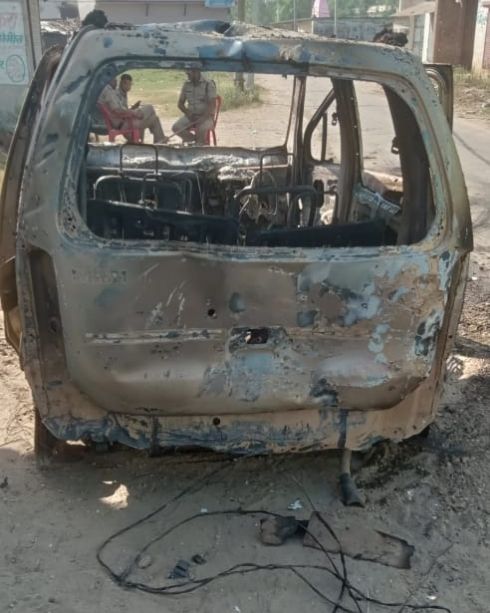 Shubham, a 12-year-old, had a head injury during the rally when the violence broke out. Shubham alleged that it was the Muslims who initiated the stone-pelting. “Hum naare laga rahe the Hindustan zindabaad, aur wo keh rahe the Pakistan zindabaad.”

Chandan Singh, the President of Bajrang Dal in Bhagwanpur, spoke to the Mojo Story about the rally. He alleged, “These Muslims are responsible for all the violence that happened the other day. Day by day, they are getting very aggressive. Stone pelting started from their end. They had it all prepared from the very start and were waiting for the rally to cross the mosque area.” Further, he went to the extent of claiming that there was one particular family who had organized the violence meted out against the Hindus.

He narrated,” There is one family near the mosque who has a really big house as you must have seen. That family’s one member lives in Saudi Arabia. And he is mainly responsible for whatever happened there. These people get funding from there to organize such crimes. All of this had been planned by them solely and later was brought to the notice of the other Muslims in the area.”

Speaking about bulldozer politics, Singh said, “These people deserve nothing short of what Yogi Adityanath has been doing in Uttar Pradesh with the bulldozer model. Bulldozer today has become a necessity to teach them a lesson without which, they will not understand.

India in the past 10-15 days has witnessed communal outrage, violence, and tension. From Kolkata in the east to Gujarat in the west and from Delhi in the north to Andhra Pradesh in the south — violence and mayhem have broken out since last Sunday, as reported by First Post.

After looking at the format of the violence in 9 states, it is quite possible to point out the type of songs that are being played in such rallies.

Such songs are being made and played in large numbers. If we get back to other rallies in time, such songs have always been a part of such rallies. The above-mentioned songs triggered the Muslims in the Jalalpur village resulting in arguments between the communities that further resulted in violence.

A day after violence broke out in Jalalpur village, people in large numbers gathered in Dada Patti village to hold a panchayat to mobilize in support of the Hindus of Dada Jalalpur.

On the very night of 17th April, a video went viral of Hindu Raksha Vahini, Yati Indranand Giri of Juna Akhada and Yati Pramodanand in a press conference where they were seen threatening the police to hold Dharm Sansad if the police didn’t bulldoze the houses of Muslims.

On 18th April, another video was doing rounds on the internet of the same Yati Indranand Giri, where he addressed a gathering in the village.

“We have given the administration 48 hours, today and tomorrow.”

When Mojo Story asked the SDM about the parked bulldozers outside the Muslim area, he said, “I have no clue as to who took the bulldozer. It was present in the village for a long time. Maybe for some other work.”

Urban Company May Lose the Women That Made It
Meat Ban in Delhi: What Does It Mean For The Shop Owners?