SSC GD 2018: Students Resort to Foot March In a Bid for Their Rights

Despite the announcement of 60,000 openings in the Staff Selection Commission General Duty (SSC GD) back in 2018, 30% of the posts remain vacant almost four years on. The government has cited technical restrictions as the reason but appears in no hurry to fill these positions, denying thousands of unemployed youth access to much-needed work. 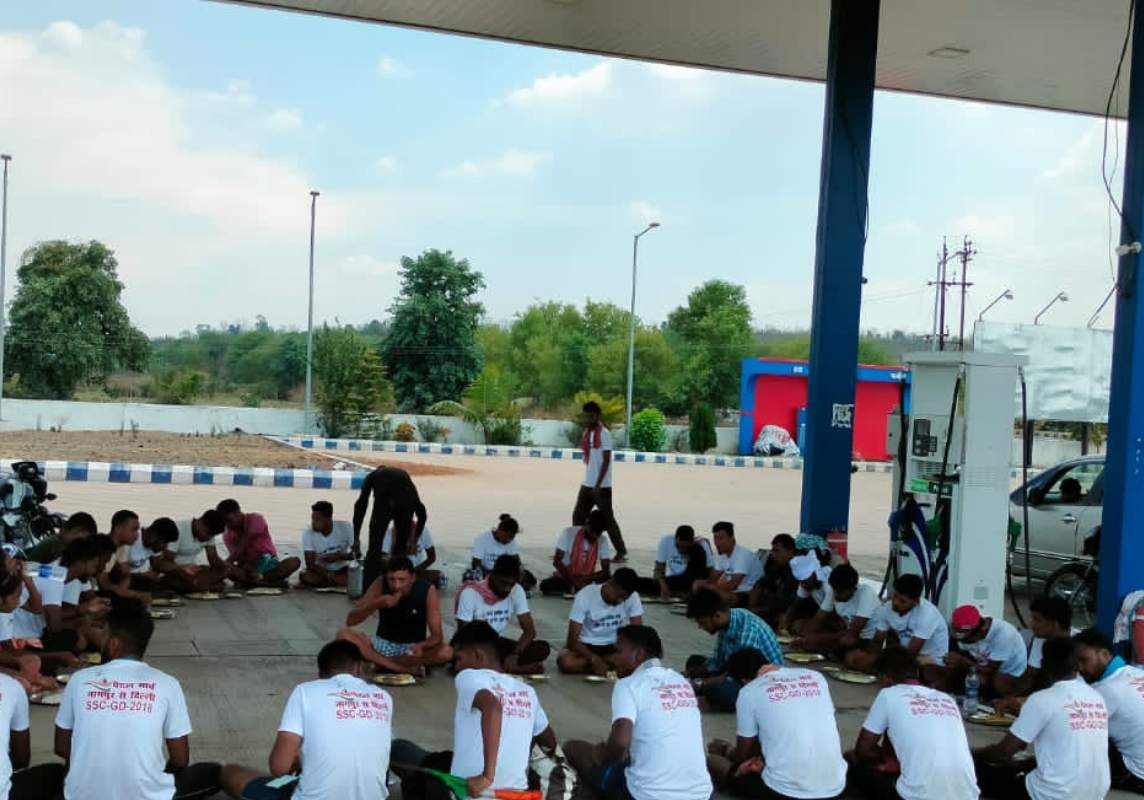 There have been protests, social media trends, and meetings with authorities in that period. But, none have yielded results. The aspirants had staged a 56-day hunger strike in Nagpur’s Samvidhan Chowk which led to assurances by Union Minister Ramdas Athawale. The Ministers agreed to hear their plea and set up a meeting with the Ministry of Home Affairs (MHA). A delegation of students was also invited to Delhi, but upon their arrival, Athawale made them wait the entire day, only to back off from his promises.

Left with no other choice, 40 students carried out a 1,100 km foot march from Nagpur to the national capital. The march began at the beginning of this month, and since then, the students have covered over 300 km. More students have joined up, taking the total to 50. The march is for the 30% of the posts promised by the Central Govt in 2018.

Students start their march with sunrise and walk till the evening as they walk in the hope to realize their dreams which at the moment seem quite far-fetched.

“Every morning comes with new struggles for us. No matter how much we try to raise our voices in the media, little heed is paid to our cause,” said 24-year-old Pradeep Patel, a candidate from Jabalpur. Pradeep’s father is the sole earning member of the family of four and Pradeep, who used to take part-time jobs before SSC GD exams, has taken several loans which he hasn’t been able to pay back in the last four years.

For the candidates, who as of Tuesday, have crossed Maharajpur, the job offers an opportunity at securing a future for their families, “we can still bear the scorching heat. We all come from really poor families and do not have enough supplies for food and water,” said Vishal, an applicant.

The students spend their night in temples, under the cover of trees, in banquet halls – wherever there is a scope for shelter and drinking water. Vishal and his fellow applicants have been active on social media, urging political parties and prominent, influential individuals to extend support to their movement, but to no avail, “Two nights back, we spent the night in the open, somehow arranged for a cylinder from the neighboring village and cooked our own food.”

Vishal Langde, an aspirant who hails from Maharashtra, has been leading the movement. He was the face of the hunger strike and now heads this march. Vishal narrated the palpable impossibility of the task at hand, “One after the other, the students are fainting because of the scorching heat. We struggle to find proper first aid measures in the jungle areas, and if more candidates continue to fall sick, we might have to bring the march to a halt.”

27-year-old Mohammad Ali hailed from West Bengal and fainted during the march. ”We tried calling the numbers available online but were told that there was no ambulance service in that area. The police took more than an hour to reach the spot,” said one of the candidates.

Ultimately, the students convinced one of the locals traveling by that route to take their fellow aspirant to the hospital. Mohammad was advised by the doctors to go home unless he wanted to risk his condition further deteriorating. But, Mohammad rejected the doctor’s suggestions and continued to march, “I’ll return home only once I have the soldier uniform as I promised my parents.”

Close to 20% of the students marching are women, all between the age group of 22-24 and hailing from rural pockets across the country. The aspirants have had to lie to their parents about their precarious situation. Some have informed their families that they are protesting in Nagpur; others have said that they are in Delhi waiting to join the force.

“After the 56-day hunger strike, a few girls did not have their periods. During the current foot march, it has been difficult to find a washroom. We have had to go to the loo in the open,” said Amita, a candidate from Chhattisgarh.

Seema described how villagers have denied them permission to use their washroom because the girls were on their periods, “Walking 30 kms in a day, with all our luggage on our bags, the burning heat and period cramps to add on to our problems, it has been really difficult to sustain.”

Students also say that their parents have cut them off. The parents have left their children with a difficult choice – either they could get back home and lead a normal life, or they would be thrown out of the house, breaking all ties with the family. But the rebellious students have decided to go home only once they complete their journey and receive a uniform.

“Throughout our march, villagers that we met on our route have been supportive and extended their help in terms of shelter, food and water,” said Vishal. The students claim that the villagers salute their bravery and courage. The students say that when they had begun their foot march, they had no funds, but as they proceeded with their journey, help has come their way from someplace or the other.

While students have not received much media attention, a few eminent politicians and personalities like Varun Gandhi, Priyanka Gandhi and Vinod Kapri have tweeted on their issue and extended their solidarity. The foot march is the last resort for the students, who believe that if they were to receive a solution, their rightful posts, it would be before the monsoons hit.