Candidates for the Staff Selection Commission General Duty (SSC GD) exam have been protesting for about two months, demanding employment and seeking justice for the delay in filling vacant positions. Despite the announcement of 60,000 vacancies under the SSC GD, 30% of positions remain vacant. However, the central government seems in no hurry to fill these posts, citing a technical rule, thereby obstructing thousands of youngsters’ access to much-needed employment. 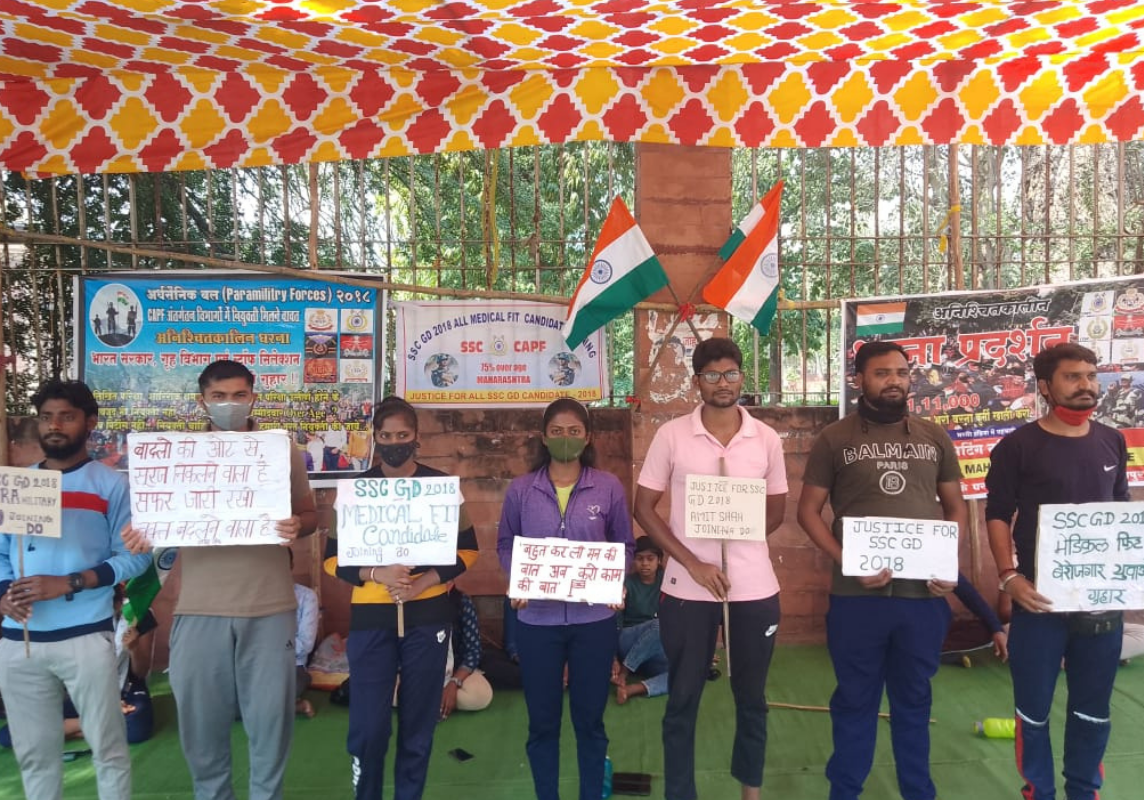 The exam for the recruitment of SSC GD constables in the paramilitary forces stands completed — their medical and fitness tests have been done. The students recently staged a fast unto death strike in Nagpur for 56 days at Samvidhan Chowk, Maharashtra, in protest of the undue delay in filling the jobs. Candidates from throughout the nation joined the protest.

Although the fast unto death strike by these students has been the longest movement for them, it is not the first time that these aspirants have taken to the streets. “Back in July 2021, we were protesting at Jantar Mantar while Parliament was in session, and Kisan Sansad was also going on. We were asked to leave on the promise that post-August 15, the police administration would arrange a meeting for these students with the Home Ministry. After being denied after the 15th, we decided to take to the streets. The police did a lathi charge in which four boys and two girls even got injured. Later, we were all taken to the Mandir Marg police station, where the SHO spoke with the eight of us who were detained. He repeatedly claimed that I had provoked the students and threatened to press charges against me. However, our legal team intervened and the matter was resolved,” explained Rajat Yadav, National General Secretary of Yuva Halla Bol (an organization that works on the issues of health, education and unemployment).

Following this, on February 9th this year, around 1,200 SSC GD constable exam candidates from across the country protested in the national capital and were later detained for at least 6 hours by the Delhi police.

“We started with protests, letters to the government, meetings with officials, and even a large-scale social media campaign—all in vain. After four years of petitioning and protesting, we had no choice but to begin a fast-unto-death,” said Keshav Yadav, one of the government exam candidates. The aspirants’ most recent Twitter campaign was the most popular, with 157K tweets.

These aspirants knocked on every door they could, from the Home Ministry to SSC Headquarters and, most recently, President Ramnath Kovind, pleading for the completion of their 3-year-long due procedure. 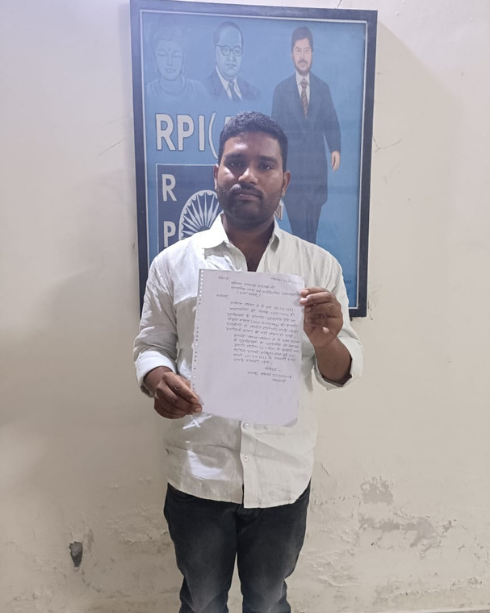 The Centre released an advertisement for 60,201 SSC GD constable jobs in the 18-23 age category in 2018. The recruitment for constables in the NIA, SSF, CISF, CRPF, BSF, ITBP, SSB, and Assam Rifles took three years, despite the regulation that any government recruitment should be completed within nine months. The written exam and physical endurance tests took place between February and August of 2019, with the medical assessment in 2020. The merit list took another year for the government to disclose.

Due to the lengthy recruiting process, 30% of qualified individuals did not join, either after passing additional examinations or joining another organization. Not just the selection criteria, but the format of the assessment was changed midway. “Contrary to what the government suggested in their 2018 notification, they changed the exam format 3 days before the written test. This came as a jolt to us as the ‘normalization’(a process wherein as per the difficulty of papers in the particular State, marks of students could be increased or decreased) was a process followed in exams that are for Group A, B where negative marking also takes place”, grieved Rudra, one of the candidates. Furthermore, many of the candidates who awaited the merit list are already too old.

Some of the protesters in Nagpur who had not eaten for over three weeks were twice hospitalized, “I have been surviving only on fluids—mostly water.” We tried contacting several officials but it was futile. We had no option but to start a fast-unto-death after protesting on the streets for 14 months and facing police brutality,” said Krishna, a candidate from Agra.

During the protests in Nagpur, there were several instances where the students had to undergo a lot of distress. Vishal Langde, who has been leading the whole protest, spoke to the Mojo Story, “In spite of regularly raising our demands on Twitter and other social media handles. When nobody took heed to our issue, we literally made a coffin for ourselves. Students were falling ill every day and getting critical. It was a question of job or death for us.”

Between the 4th and 15th of this month, several tweets were seen where the images showed these students carrying coffins on their shoulders and taking marches carrying the coffin, suggesting that if the government did not meet their demands, they would all die.

On May 5th, a fire broke out in a bus at Samvidhan Chowk(where the protesting students are), Nagpur. These protestors got to their feet and helped rescue the citizens stuck inside before the firemen arrived. Not just this, but also extinguished the fire. Several other accident incidents have also taken place where these protestors have been seen helping the citizens.

A month back, the students were in a conversation with Union Minister Nitin Gadkari’s Personal Assistant (PA) when they protested outside the minister’s residence. According to the students, the PA asked them to bring their protest to a halt but later went on to threaten them as they spoke to the media, “He turned us down when we sought real answers,” Langde said, adding that he even intimidated the candidates.

The issue of these students has been raised several times in Parliament, but all in vain. Nityanand Rai, Minister of state for home affairs, had even questioned the Centre in Parliament regarding the 1,27,000 vacancies in the paramilitary. Following this, several other leaders including Minister of State for Social Justice and Empowerment Ramdas Athawale, President of Indian Youth Congress B.Y. Srinivas amid a few others have spoken and extended their support to these students.

It was only on the verbal agreement and assurance given by the Union Minister, Ramdas Athawale that the students decided to bring their protest to a halt. Post this, they were given a call by the Minister’s secretary, who invited a delegation of these students to come to Delhi on the 23rd of this month to have a meeting on their issue. 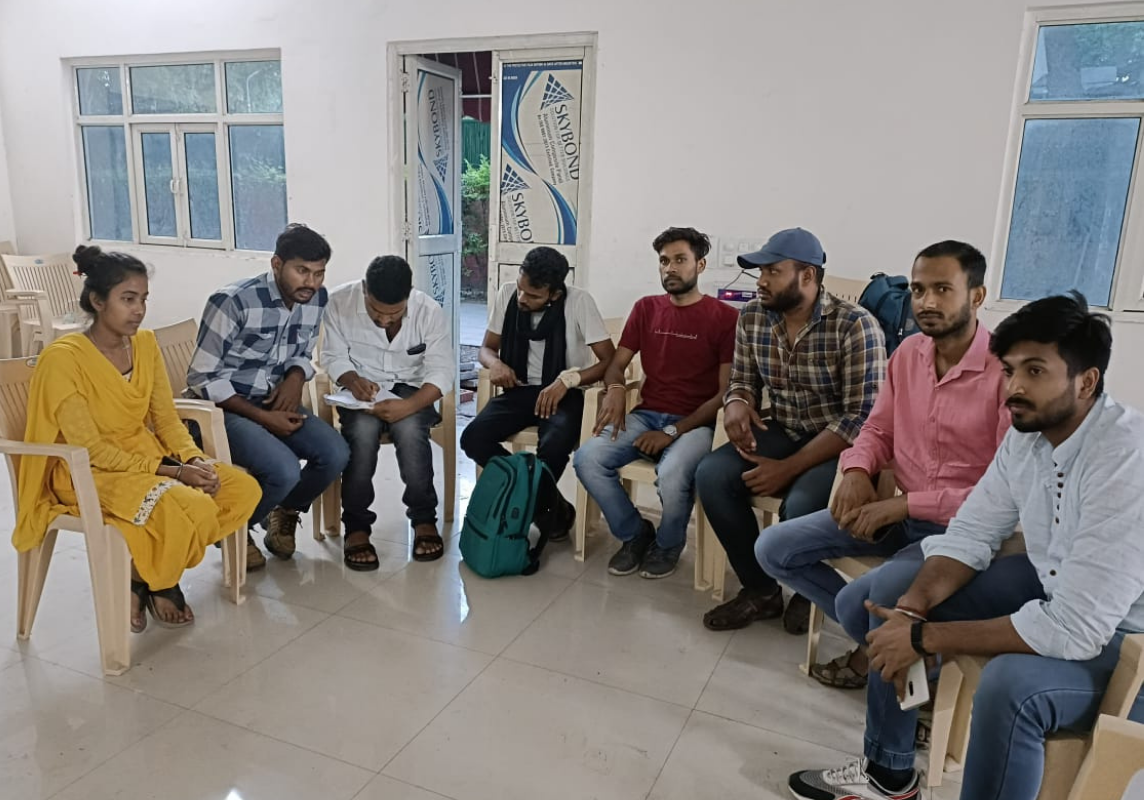 The SSC GD candidates waiting at Ramdas Athawale's residence for him to hear their pleas.

Pradeep Patel, one of the students who came to Delhi, told Mojo Story, ”We have been here all morning. Tried reaching out to the Minister, who first delayed the timing from 2 pm to 4 pm. Later, his secretary called and said that the meeting was cancelled. We were shattered. Someone had come to Delhi fleeing from home without letting their parents know, some were here leaving their parents in critical condition, and everyone was in a poor financial state.”

The students were at the Minister’s office in Lok Kalyan Marg all day waiting to be heard. Ultimately, the Minister did meet them at 11pm in the night, took a letter from their end when they kept requesting and asked them to get back in June. “This is not what we were assured about. This is not why we left our 56 day-long hunger strike. It is absolutely unfair on the Minister’s part to treat us like this. I was literally crying in front of him, begging to be heard but he paid little heed,” cried Keshav, an aspirant from Prayagraj, Uttar Pradesh.

As of now, the SSC GD aspirants have brought their fast unto death strike to a halt, seeking a meeting with the Joint Secretary of the Ministry of Home Affairs as per the assurance they received from Ramdas Athavale, but with that effort futile, they now plan to start a foot march from Nagpur to Delhi by the end of this month.

Crypto Christian: Dichotomy Between Desi and Videshi, A Recipe of Hate Against Christians
“I’m Your Husband, You Owe me Your Body”: Marital Rape Survivors on What Their Rapists Told Them