Stranded Indian Students Search for Escape in a Foreign Land

“Until now, I am fine; I do not know what the future holds,” said Rohit from Kyiv when asked about his current situation. Rohit is one of the many Indian students held up in parts of Eastern and Central Ukraine, who have been left to manage with limited supplies in closeted deep underground bunkers as they wait for help to reach them. It has been more than 2 days since they were left stranded. Even though embassies and governments have asked them to remain calm and given them verbal assurances, the cry for assistance is loud and persistent. 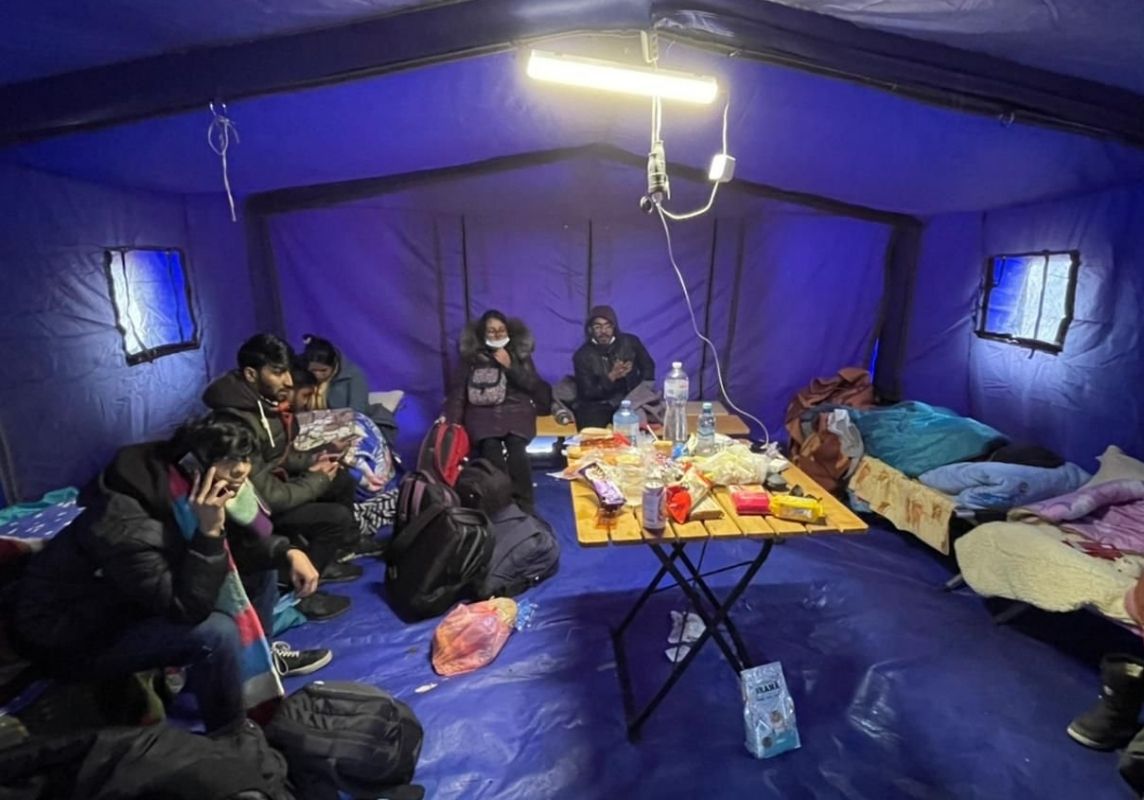 Tensions between Russia and Ukraine began to escalate in the latter half of February. The universities have always denied that the situation could spiral out of control. Ukrainian government officials or universities had never anticipated that the situation would take a violent turn. When students heard the news, they approached their colleges, who refused to hold any online classes and instead insisted that the students stay in the country and attend college offline, “Our universities continued to deny the possibility, leaving us stranded. No one is responding,” said Mridul, a student from Kyiv.

In the early morning of February 24, 2022, heavy bombardment was heard in the eastern part of the country. Ashwin, one of the Indian students, says, “We never must have woken up so early. But that day, it was the blasts and the vibrations that woke us up.” As the Russian onslaught gained pace, students began reaching out to various groups such as SOS India in an attempt to seek assistance in the absence of any help from the embassy.

“We hear most of the blasts between 4-7 and post-late night.”

Mojo Story spoke to the students stuck in areas of Kharkiv and Kyiv. These are the areas that saw continuous gunshots and strikes through the night.

Tanisha Mishra, a student from West Champaran in Bihar, lives on the outskirts of the capital and attends Kyiv Medical University, which is a short walk away. Tanisha tells Mojo Story and recounts the events from the initial assault, “I’m in Kyiv right now, at an apartment. I normally spend all of my time in the bunker, but there are around 250 people there, and it’s overcrowded. After a while, it becomes suffocating, and the Ukrainians even misbehave with Indians and students of other ethnicities,” she explained.

While the ongoing war had made life difficult for the students, instances of racism have added further distress, as described by several students trapped at borders and different bunkers of various hostels and residences.

Tanisha expresses her sadness as well as the anguish of other students, “Here in my area, food and water aren’t a problem; the problem is the Indian embassy because they just keep giving us slips and making us fill out forms, but they say they can’t do anything else. They don’t even tell us what other options we have.” She went on to elaborate on the help provided by the Indian embassy, “The embassy claims that they have been assisting in the rescue of the students, but that is not true. So far, no students have been rescued from our surrounding areas. Only those who risk their lives and travel to the border by themselves receive assistance, according to the videos we’ve seen.”

Tanisha and her friends continue to spend their nights in despair. Shivering cold and the sound of constant shelling every 3-4 minutes added to their uneasiness. That has translated over to their parents who lay in wait for their children to be evacuated safely.

The students stuck in Kyiv and Kharkiv have been trying to reach out for direct help by various social media handles, “The government continues to ignore the fact that we, the people trapped in the east, are in greater danger. The students who are stranded in the west are being rescued by any means possible, but no one is paying attention to us. We are terrified 24 hours a day, seven days a week. What is it that we haven’t tried yet? No one has responded to our tweets, and no one has responded to our emails either. Our agents are also powerless; they can’t do anything unless the government takes action. We are the ones who need to be evacuated; our lives are in danger,” cries Ashwin, a student studying in Kharkiv and is originally from Odisha.

Since the outbreak of the war, many opinion makers have taken to Twitter, and instead of amplifying the voices of the students trapped there, they have blamed them for not acting faster and leaving the country. Naveen, an Indian student even lost his life on 1st March 2022. Even then, people on Twitter blamed it upon the students.

@advnarayang tweeted, “Neither we the people of India send these guys to Ukraine nor the government of India as its emissary. The Government issued the 1st advisory on 15th Feb, Kiev was functional until 23rd. What were these guys and parents doing between 15-23 February?”

“21-year-old Navin from Karnataka comes under the attack of shells in Ukraine. But the question is, why did he ignore the advice from the Indian government? Was he waiting for a private jet to bring him back?” tweeted @Mbharat10252252

Indeed, the conflict between the two countries did not arise out of nowhere. It had always been there, but it was aggravated further towards the end of February. If we look at the student’s side of the story, they accept that their parents had asked them to return home, but this could not have happened due to the miscommunication on the university’s end, who stated that the new semester starts in February.

The college constantly denied the fact that Russia could invade the country. They stayed in denial and so did our government who unlike other countries did not issue proper notice for the students to foresee the threat. The University stressed conducting offline classes only. While other countries like the United States issued notices for their students, India passed advisories.

Another student, Rovil from Kharkiv, elaborated on the government response saying, “On February 15, when there was anticipation from the US Intelligence that war could break out the next day, officials from our embassy said the ones who are not essential should leave Ukraine. Is this the way the authorities should be treating us? We are studying medical science here. How can the country treat us like this by bifurcating us into essential and non-essential?  Other countries had released a notice calling their students back on 13th February itself. And stressed on them leaving Ukraine in 2 days. So, they were evacuated. Other countries took action before the students were stuck in dire straits, ours did not.”

“We have our bags packed, our documents ready and shoes tied. This is how we eat, sit and even sleep. Most of our nights have been sleepless and all we ask for is to take us home,” Rovil explained. We live with aircraft and missiles flying right above our heads. We hear gunshots and blasts all day. Does the embassy even realize the fear we live amid?,” Rovil asks the Mojo team.

Students have been making as many videos as they can – recording their plea, showing their bunkers, and demonstrating how there has been no response from the embassy – all while Indian news channels applaud the government. The students are screaming, begging, and pleading for one thing: rescue.

Ajay, a Bogomolets University student, shared a video showing the condition of people’s packed bunkers with a limited supply of food and water. Students were laid down on the floor in the absence of basic amenities and aid.

In between all of this, several students seeing the plight of Ukrainians have made up their minds to stay there and help until they are there. Rovil is one of them. He says, “I have been here for over 4 years in this country with these people. Seeing them in such devastating conditions just haunts me. I would rather stay here and help them out, but I am worried about my colleagues and my college mates. We wish we could share more videos socially so people would understand what we are living with, but unfortunately, we cannot. It incites anger in the locals who fear every step one takes. Also, we fear that if our videos go viral, the embassy would not come to our rescue.”

“The country should realize that if we lose our lives, it would not be just us who’d be brought down to dust. For every student who dies, their parents would die in trauma too,” a student who chose to remain anonymous told Mojo Story over a phone call.

The war is still going on as of February 28, 2022, and the students are still stranded. Not only are the students traumatized, but so are their families, who are waiting for their children to return home safely. They, along with their children, have sleepless nights and regret sending their children out of the country more than ever.

Most of the students that Mojo Story contacted recited how they were not giving complete details to their parents, not wanting them to undergo the pressure as they did themselves. John, a student stranded in Ukraine, says, “My parents do not know what has been going on. My father has a lot of health problems and I do not want to add to their stress. We keep in touch every hour to check if our child is fine or not. The kids are in a deplorable state and need immediate help. We do not say that the embassy has not been of any help, but we need to see more efforts from the government’s end if we want to save the children.”

As of February 28, while this report was being filed, the students in Kyiv and Kharkiv are yet to receive assistance. In a viral social media video, it was also revealed that students who attempted to take a cab to the railway or metro station were apprehended by the Russian army while on their way (however Mojo Story could not verify this allegation). With no sign of peace, the efforts, plights, and search for assistance continue.