While Protests Are On Halt, Students of RRB NTPC Remain Arrested Amid the Media’s Silence

Although the violence in Bihar and Uttar Pradesh has come to a halt after verbal assurances given to students by the mouthpieces of the govt, the students who were arrested during the protests have been left to rot in prison with no aid forthcoming from youth movements, teachers and other political persons. 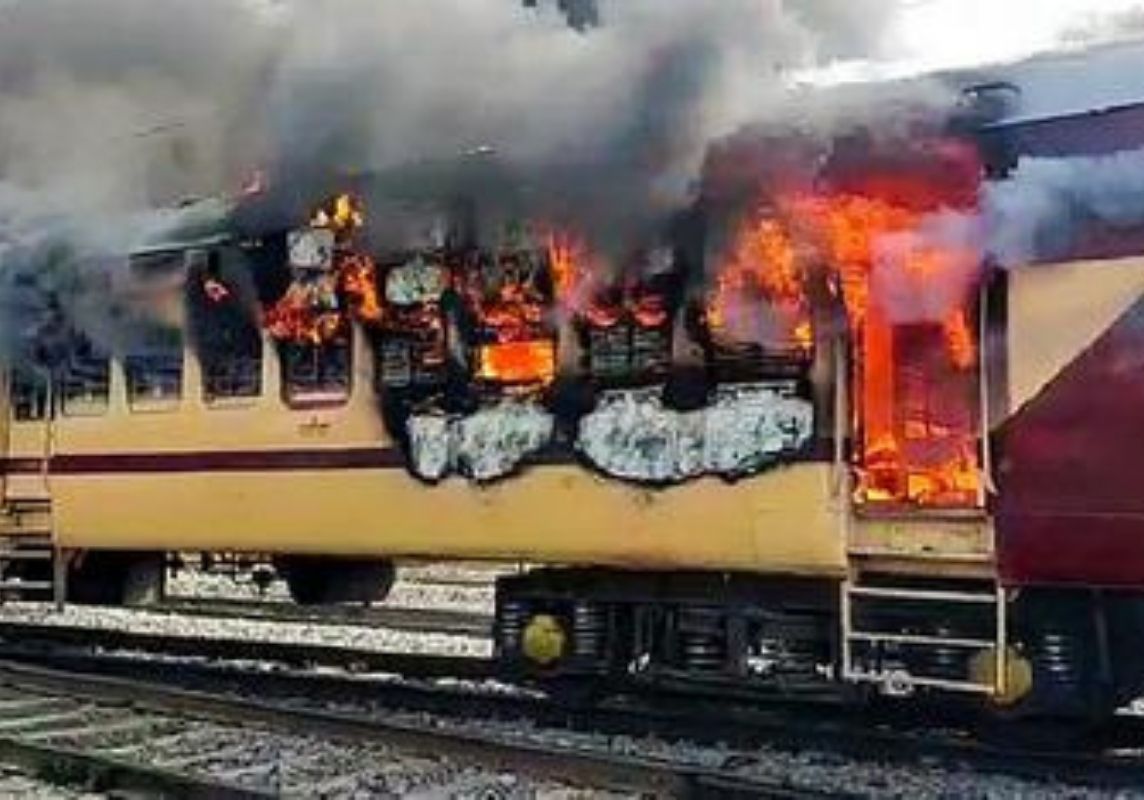 While the students in Prayagraj were given bail in the first week of this month, they have also been given the next date to their hearing in the Court.

“My son is a very bright student. He cannot be involved in any mischief; I do not know much but he had been selected for the next round of the Railways exam. Why would he then go and be a part of protests,” said Umesh Mahto, father of Rajan Kumar, one of the students who was arrested.

Rajan’s family stays in Patna. His father Umesh is a daily wage laborer and works at several construction sites loading and unloading sand from trucks. Umesh has four sons with Rajan being the youngest. Umesh along with one of his sons are the only earning members in the family. The family rented separate living space in another part of the town where the other students stayed for Rajan to study.

Remembering what had happened earlier on January 24, Umesh narrates, “I had spoken to him in the morning that day. He was really happy and needed money. Post-work, I was supposed to go meet him and give him Rs 900 for his expenses. Over a phone call, I told him that I would come later in the evening post my work to give him that money. When I did reach his place, I saw a lock on his door. On enquiring with the neighbors, I got to know that my son had gone somewhere in the afternoon.”

Umesh first thought that his son would be back by night and did not want to jump to unpleasant conclusions instead, decided to wait until his child returned. When he did not, however, he spoke with one of Rajan’s classmates who lived with his father in the area and learnt that some students were out for protest of which the police had arrested a few. This shivered him with fear and he went to the police station post-midnight.

He further said, “When I reached the police station, I learnt from the people there that my son had indeed been arrested. I was also told that the police had even beaten him up and he had three stitches on his right hand. When I met him later at the court, I learnt that his other hand was also bruised and swollen.”

Rajan’s father further told Mojo how he had been managing the expenses of the house while juggling his son’s studies. He and his working son earn Rs 400 each from a day’s work and that is the only source of income for the family of 6. “The sand work in Bihar is also not in a very good condition, I get work for 20 days in a month; Rs 4000 goes just to pay rent for Rajan’s and my place. I do not have any land either,” he said in a conversation with Mojo Story.

The judicial system in Bihar is one of the slowest in the country. Even the rejection of the bail order was passed four days post the hearing of their case. When Mojo Story tried speaking to the MLC from JDU, Niraj Kumar, who has played a mildly-active role in the case of these students, he spoke from the government’s side, “I have been trying to support these students and their families as much as I can. I am in regular touch with the students’ family. Now, what the court will do, I do not know as there can be no interference from me in that case, but I am with the students.”

Verbal assurances as claimed by the lawyers and the family of these students had been given by Mr Kumar from the very day of their arrest. Umesh said to Mojo, “Niraj ji has said that he is with us and will come to our rescue. But I do not see complete support from his end as other people have been giving me.”

Although Mr. Kumar continuously stressed the fact that he had been in support of the parents and also sympathized with the students, the govt’s advocate in court has vehemently opposed the bail petition filed for the same. Mr Kumar also chose not to make any comments on the quashing of the FIR or the govt revoking the charges filed against these students.

Advocate Rishav Ranjan, National General Secretary of Yuva Halla Bol, is representing these arrested students in court. Commenting on the slow process of the Bihar judicial system, he said, “We have been trying our best to help these students out. However, if the judicial system does not cooperate, how do we rescue these students? The website takes 4 days to pass a simple order. It is very disheartening that the students have to undergo such harassment.”

In Prayagraj, the case is different from Bihar. All the arrested students were released by February 7. The police here had caught the students who were not even a part of the protests. One of the arrested persons, Rajesh, 47, who is a social activist who was in support of the protesting students alleges that he was targeted not because he was seen in the NTPC protests but because he had been on the radar of UP police for a while now.

Explaining further, he said, “We from Yuva Manch have been doing a ‘Dharna pradarshan’ for four continuous months considering the amount of negligence that the State had bestowed not just upon these railway candidates, but all the unemployed youth. The government has failed in all its promises because of which we’ve had to do continuous protests.” The students had been protesting against several vacancies in Allahabad from the beginning of January as well.

On January 4, Rajesh along with several others was booked under several bailable and non-bailable offenses followed by the issue in the results of NTPC. The students at first in a social media campaign tweeted about the scam and warned that they would take to the streets if their demands were not met. It was only after continued social media trends that the government did not respond to their pleas, students in various parts of the country took to the streets to protest. The case of Prayagraj is no different.

“On Jan 24, with a call for nationwide protests, anger ignited in the students of Prayagraj as well, first NTPC results and then changes in the structure of Group-D exams. I have not seen any violent activity from the student’s end here. And as far as any Youth Organization/Movement is concerned, I do not think any of the organizations would even promote this behavior,” said Rajesh. During their arrest, Rajesh asserts that the police beat up the candidates and also tried to terrorize them.

Kishan Kumar, a student from Giridih in Jharkhand, was also arrested during the protests. He had been preparing for the NTPC exam for two years, staying in Patna. He had even cleared the SSC GD exam last year, but did not want to get into defense and chose to prepare for Railways instead.

Vivek Kumar, Kishan’s elder brother spoke to Mojo Story about their issue and spoke about the family’s woes, “It is our bad luck that my brother got into trouble with this. We are 4 brothers and live along with our parents in Giridih, Jharkhand. I have taken loans in order to fund my brothers’ education. He has always been a bright student. The other day when he was arrested, I am absolutely sure that he was not involved in any kind of mishap. While this happened, he was on a call with his brother Vikas Kumar, who has also been named in the FIR.”

Mojo Story also spoke to Vikas about the conversation, “I was on a call with him while he was returning back to his home. While I was conversing with him, he got really nervous and started to say to someone that he was talking to his brother, which is me and was not involved with the others in the protest. That is when I realized that something was wrong. In a while, his phone was off.”

In the meantime, these students remain without any aid. Families who do so much for their kids in a hope for a better future are in unimaginable distress. Talking about the judicial system, expressing his anguish Umesh (Rajan’s father) said, “The law seems to be only for the poor. I cannot afford to leave my work and run to the courts every day. I am tired now. But more than my wife and me, it is my son who is suffering the most. What is the maximum that could be done? Would these people put me in jail as well?”

The families are anxious and rely completely on their lawyers who have been helping them for free. Advocate S.N. Veeru and Advocate Rishav Ranjan, who are a part of the Youth Movement Yuva Halla Bol, are representing Rajan Kumar and Kishan Kumar. Advocate S.N. Veeru said, “In the first place, Bihar police filed an FIR against these students at Patrakar Nagar police station. On January 24, they were arrested and taken on remand the next day.

On January 25, another FIR was filed against them at GRP Nagar Police Station. When these people were already in custody, then how can an FIR be filed on the same student for being present in a different place. Is that even possible? On 3rd February, all of them were named in an unknown FIR which was filed against them by RPF. The teachers named in the FIR were left but the police caught hold of the students. This is nothing but a conspiracy against honest and innocent students, one of whom was not even present in the protests.”

The fight for bail for these students continues. The advocates are attempting to get a hearing date as soon as possible. The case initially was in the hands of the Chief Judicial Magistrate (CJM) but has now been transferred to the District Judge post-filing. Mojo Story tried reaching out to the DGP (Director General of Police), Bihar for a comment but received no response. The next date given for their case is February 15.

Meanwhile, the students remain in jail and their families in indescribable agony. While there is no update on any action taken against the policemen who were found brutally assaulting the students, the cry for justice continues.

Meat Ban in Delhi: What Does It Mean For The Shop Owners?
Amid Hijab Row, Bengaluru College Asks Sikh Girl to Remove Turban