In a latest spree of what may be said as infringement of basic rights, the state police in India’s northeastern state Tripura, has booked 102 people under the stringent and draconian Unlawful Activities (Prevention) Act for merely even tweeting about the alleged communal violence in the state. The case that was first filed by the West Agartala police station has now been transferred to the state’s crime branch. 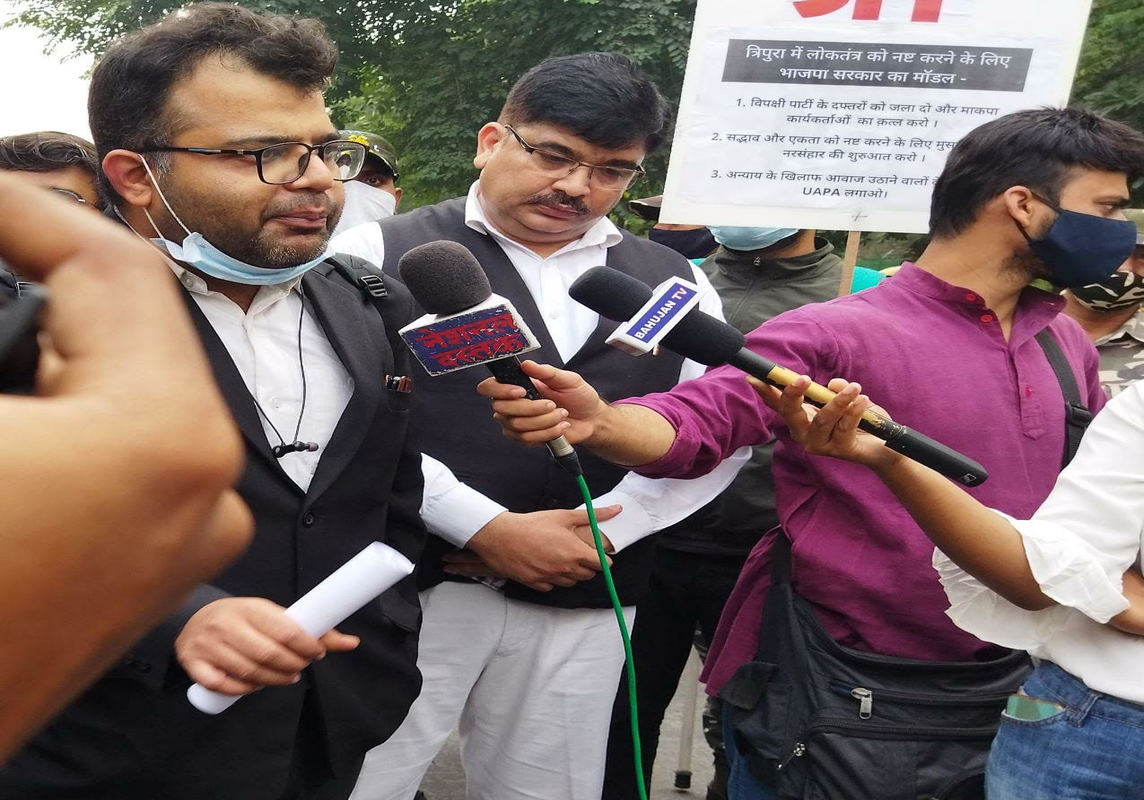 The cases on more than hundred social media accounts come after the state police first booked lawyers who happened to be part of an independent fact finding team – Advocate Mukesh and Advocate Ansar Indori – under the same UAPA and several other sections of Indian Penal Code (IPC). The fact-finding team highlighted that properties owned by the muslims – shops and residential houses and mosques were allegedly attacked by the Hindu fundamentalist groups.

The fact-finding report titled, “Humanity Under Attack in Tripura,” by Lawyers For Democracy,  is suggestive that the attack on Hindu minorities in Bangladesh during Durga Puja celebrations  was retailed by attack on Muslim minorities in Tripura. According to the report, Vishwa Hindu Parishad (VHP) organized rallies across the state to protest against the anti-Hindu violence in Bangladesh and the violence began with preparations for the October 26, 2021 rally. The lawyers group indicated that there was a “political design” to violence in Tripura. “The situation in Bangladesh has been used by the well-oiled propaganda machinery of RSS-BJP to foment communal hatred across the country – the terror and violence unleashed on Muslims in Tripura not being an exception to the designs of Sangh and its affiliates,” said the report.

The report claimed that 12 mosques, 9 shops and 3 houses were attacked by the rioters. The report squarely blamed the police and administration for the failing to maintain law and order. It highlighted the meeting of Jamaat-E-Ulema (Hind) with the Chief Minister Biplab Kumar Dev, alleging that the muslim organization apprised him of the situation and also speculated “danger” to the peace between Hindus and Muslims.

The lawyers group demanded the government to constitute an inquiry committee headed by a retired High Court judge, strict legal action against persons and organizations involved in objectionable sloganeering  and shared false and provocative messages on social media, and an investigation in fast track court for anyone found guilty in riot, looting and arson.

A day after the report was released in Delhi’s Press Club of India, Tripura police informed Advocate Mukesh and Advocate Ansar Indori that a case has been registered under 153A, 153B, 469, 471, 503, 504 and 120B of Indian Penal Code and section 13 of Unlawful Activities Prevention Act (UAPA), “against the social media posts circulated by you/statements made by you for promoting enmity between religious groups as well as provoking the people of different religious communities to cause breach of peace.”

“During the investigation, your involvement has been found in connection with the case. As such, there are reasonable grounds to question you to ascertain the facts and circumstances relating to the case,” further said the notice served by West Agartala Police Station to the lawyers part of the fact finding team.

“The case against the lawyers is an attempt by the Tripura government to silence the secular and progressive voices. Whatever we have penned in our fact finding report is true. We have shot  pictures and videos as well to substantiate our report,” said Advocate Ehtesham Hashmi, a Supreme Court lawyer who was also the convenor of the programme held at Press Club, “We (Lawyers for Democracy) stand by our report and will take appropriate legal action against the FIR filed against the lawyers.” He also pointed towards the upcoming local bodies election and the nefarious communal design that might be used by the BJP-RSS to reap benefits in elections.

Pointing out that #Tripura_Is_Burning is a call for corrective action. But BJP’s favourite cover-up tactic is shooting the messenger.

Truth can’t be silenced by #UAPA.

A joint protest by Student, Worker and Lawyers Organisations mobilised by All India Central Council of Trade Unions (AICCTU) was held at Tripura Bhawan in solidarity with the lawyers who conducted fact finding on anti-Muslim violence in Tripura. “It has been widely reported that the communal violence was initiated after a rally called by Vishwa Hindu Parishad where communal slogans were shouted and properties of Muslims were attacked. The Tripura police, rather than acting against the perpetrators of violence, issued a series of tweets denying any communal incident,” said Sucheta De, member of Delhi state AICCTU. Commenting on the  nature of police action and the charges, she said, “The desperation to silence any attempt to search for the truth is that the police have slapped UAPA on practicing lawyers. It is also to be noted that UAPA has become a blatant political tool to hide truth and victimise those who have the courage to speak truth.”

Tripura police did not only register cases against the lawyers but also against 102 social media accounts for “publishing or posting social media posts in various platforms like Facebook, Twitter, YouTube distorted and objectionable news items/statements regarding recent clash and alleged attack upon mosques of Muslim communities in the state.” 68 out of 102 are twitter handles, of which conspicuously, a majority of handles appear to be held by minorities, while only a few appear to be from other communities.

One of the journalists, Shyam Meera Singh, alleged that he has been booked under UAPA for merely tweeting, “Tripura is burning.”

Speaking to MoJo, Singh said,“Just for three words, the BJP government of Tripura has slapped UAPA on me, at first brings laughter, then I feel ashamed and then I am anguished. If draconian laws like UAPA can be charged just for a tweet, it should be a matter of grave concern for every citizen, every group of the country. If followers of a particular religion are unsafe, then every citizen of this country is unsafe.” He further said that he would never hesitate to stand up for justice and that the, “Hindu majority of the country must speak up against the atrocities against muslims.”

The police action has received sharp reactions from Editors Guild of India. “The Guild is of the opinion that this is an attempt by the state government to deflect attention from its own failure to control majoritarian violence, as well as action against the perpetrators of this. Governments cannot use stringent laws like UAPA to suppress reporting on such incidents,” said the Editors Guild in a statement, adding, “Guild reiterates its earlier demand to the Supreme Court of India, to cognizance of the manner in which such laws are unjustifiably used against freedom of speech, and to issue stringent guidelines on charging journalists under them, so that these laws don’t become an easy tool for suppressing press freedom.”

The Editors Guild of India is deeply shocked by the Tripura Police’s action of booking 102 people, including journalists, under the coercive Unlawful Activities (Prevention) Act, for reporting and writing on the recent communal violence in the state. pic.twitter.com/bkDssiqOXK

Among the other recognizable Twitter accounts been named in the case appear to be associated with National Institute of Technology Jaipur professor Salim Engineer, Former Chairman of Delhi Minority Commission Zafarul Islam Khan, student activist Sharjeel Usmani, journalists Jehangir Ali and Sartaj Alam, among many others.

MoJo could not independently verify the content of the “objectionable” posts tweeted by the named accounts that possibly could pose a threat to the sovereignty of the Indian state.

Masihuzzama Ansari, a correspondent with India Tomorrow, who had been reporting on the violence was also quizzed by the police. “On November 2nd, Tripura Police questioned me about my whereabouts and asked me what my ‘opinion’ was on the violence. I clearly said that I am a reporter on assignment and have no opinion but I am here to report the facts. They (police) also enquired me about the group of lawyers who were part of the fact finding team, as to what they were saying about the violence,” Ansari told MoJo. “Even on the day I was reporting from the site, from the shops that were burnt in the violence, police presence was intimidating for villagers to speak to the press,” he added, while also claiming, “Police kind of influenced the reporting on violence.”

Speaking to Mojo, Clifton D’Rozario, National Convenor of All India Lawyers Association for Justice, said, “The cases under draconian law such as UAPA is simply an intimidation tactics used by the police, however it’s not new but the way in which the criminal laws are weaponised against any form of democratic dissent is worrying.”

“It is high time when courts must be taking suo motu cognizance of the misuse of criminal laws such as UAPA and ensure that such laws are repealed,” he said further, adding, “The lawyers body is contemplating the course of action.”

Until Saturday, four accused were sent to jail for allegedly promoting hatred among two religious groups after Oct 26 violence in Panisagar area of North Tripura, news agency ANI quoted Arindam Nath, IG (Law & Order) as saying. He also said that police have sent letters to Twitter, Facebook & YouTube to delete posts and give details of the accounts concerned.

Earlier, the Press Relation Officer (PRO) of the Tripura Police, Jyotishman Das Choudhary said, “The case which was earlier investigated by police is now transferred to the Crime Branch division of Tripura police. The police have been trying to trace the handlers of the accounts.”

MoJo had sent a detailed questionnaire to Tripura violence seeking their version of the whole episode, also seeking information on what possibly prompted the police to initiate a ‘suo-motu’ complaint against social media accounts and what action has been taken against the actual perpetrators of the violence, if any. In response to MoJo, Subrata Chakraborty, AIGP (Law and Order) only said, “All the related cases are under investigation and close supervision of the Honorable High Court of Tripura,” and therefore, “at this stage this office is not in a position to comment anything.”

Meanwhile, the National Human Rights Commission has asked the Tripura government to submit an “action taken” report within four weeks on alleged violence against minorities in the state. The complaint to NHRC was taken up by All IndiaTrinamool Congress (AITC) spokesperson Saket Gokhale. TMC is also a contender for assembly elections scheduled in 2023. “We must fight and defeat BJP otherwise the situation in Tripura would turn similar to Afghanistan,” said party’s general secretary Abhishek Banerjee a few days ago.

According to the sources, senior supreme court lawyer Prashant Bhushan will be taking up the case in Supreme Court and seeking protection from the arrest of the activists, journalists and lawyers booked under UAPA.