It’s been over 4 months since medical students returned from the war-torn zones of Ukraine and came back to India, leaving all their dreams, studies and everything behind. Even after 4 months, these students are trapped between their dreams and no concrete reply from the National Medical Commission (NMC). 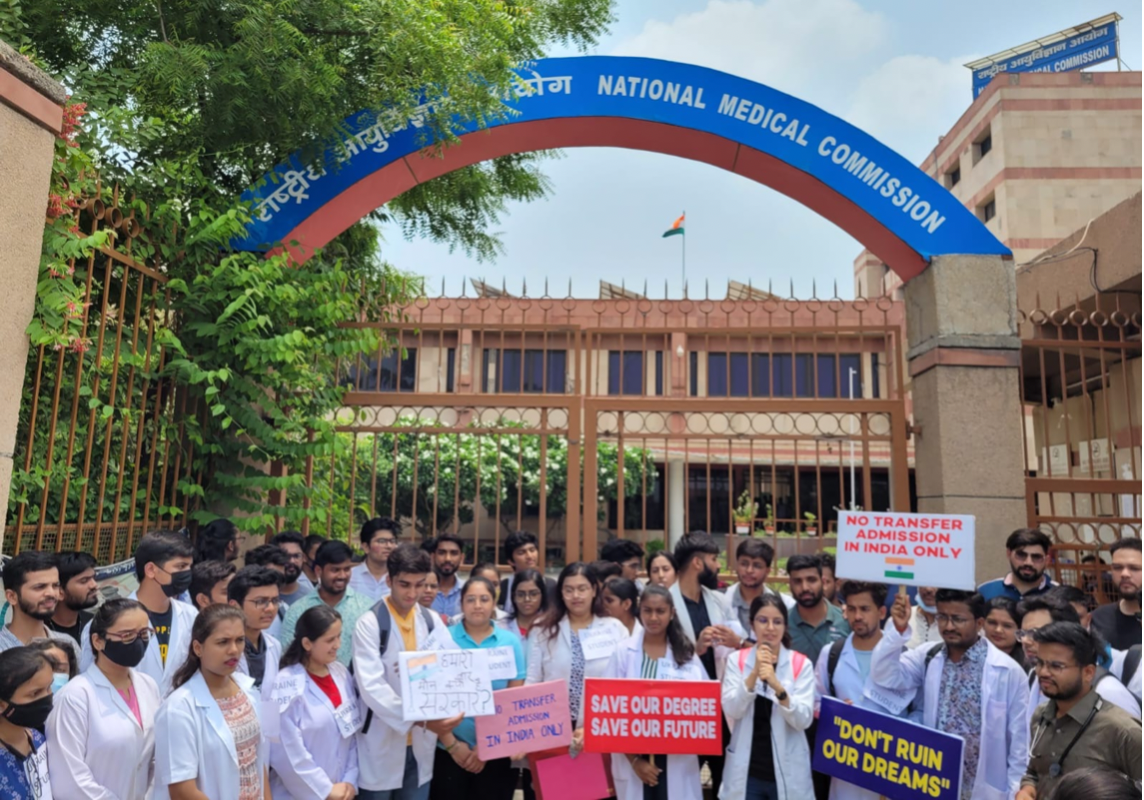 For the past 3 months, these students with their parents have been protesting, holding the apex regulator’s hesitation in deciding to accept them into colleges at home. In response to their growing dissatisfaction, approximately 250 students demonstrated outside the NMC’s office in Delhi on Tuesday. According to Harsh Goel, an aspiring doctor, if other countries like Pakistan, Bangladesh, and the United States can get their students admitted to colleges in their own country, why can’t India?

According to students, a statement in this regard is currently anticipated on July 15. According to a PTI article from June, the regulator had produced a proposal that would permit final-year students to finish their coursework online before taking the Foreign Medical Graduate Exam (FMGE). If the plan is approved, students who pass the FMGE will reportedly have to do a two-year internship rather than doing just one.

First and second-year medical students would have to start their undergraduate education from scratch by taking the National Eligibility and Entrance Test, according to another draft proposal referenced in the paper (NEET). Whereas third and fourth-year student-specific suggestions were absent.

A petition has been filed in the Supreme Court seeking guidance in formulating rules for the temporary relocation of Indian medical students who have been evacuated from Ukraine to Indian Medical Colleges during the same academic year. Students who were evacuated have filed the petition, asking for the apex court’s urgent indulgence in view of the extraordinary circumstances that have arisen in the wake of the Russia-Ukraine war and have seriously hampered their ability to complete their studies.

“Draft proposal is not in favour of our future”

The petition filed by Aishwarya, an advocate, stated that the education of around 14,000 Indian students who were evacuated has come to an end because their careers are jeopardized and the fundamental rights guaranteed by Articles 14, 19, and 21 of the Indian Constitution are no longer real.

The advocate added that the evacuated students, including the petitioners, in this case, are experiencing extreme mental anguish and suffering because their future is in limbo, and their education has essentially come to a standstill since February 2022, with no obvious signs of the war-torn nation returning to peace.

“We can’t sleep peacefully. Thinking about our future makes us cry,” Trisha, a 19-year-old second-year student at Vinnitsa National Medical University in Ukraine, told Mojo Story. “When we were in Ukraine and came back to India, all the ministers and media wanted to meet and take our interview, but what happened now? No minister, no media wants to stand with us. They have left us in the dark,” she added.

Discussing the draft proposal by the National Medical Commission, Trisha said, “We can’t start from the beginning and appear for the NEET because we are in the middle of our medical Journey. NEET and medical are completely two different things. Moreover, we have spent our time, energy and money to get where we are right now. The draft proposal isn’t in favour of our future. What happened in Ukraine is not our fault. Why do we pay the price?”

She further added, “When we talk about this to our parents, they get much more worried about us and our career. They have already spent lakhs of money. We are middle-class people, our parents have taken loans, and some have even sold their land just for us. And now, it all feels like a waste.”

“Yes, we are very depressed because I am in my fourth year, and I am left with only 1.5 years to complete my MBBS. I cannot really appear for the NEET exam or study other things”, said Anand, another student.

Concerning the pressure from the university, students stated that universities are increasing pressure on them to submit fees by the middle of August, “What’s the point of submitting fees if we get to study online mode?”

Blaming the NMC, the students said, “Two months ago, NMC gave a deadline till 29th June saying they will give some draft, but now they are postponing the dates and due to all of this, students are getting depressed day by day and losing our hopes to become doctors.”

In an appeal to the Indian government, Harsh stated, “We don’t have enough money to study in other European countries. If we had that much money, we would have attended private medical schools in India. It is a request to our government to please accommodate us in India and save our careers. We want to fulfil our parents’ dream by serving our country and making everyone proud.”

West Bengal and Karnataka came up with a temporary solution

Harsh Goel, an aspiring doctor, informed that while the NMC’s Undergraduate Medical Board (UGMEB) deliberates on an official decision, some states, such as West Bengal and Karnataka, have permitted medical students who have returned from Ukraine to attend state colleges as “observers” for the time being.

Beginning on June 1, the West Bengal government allowed 394 students who were enrolled in medical colleges in Ukraine prior to the Russian invasion to do “observership” in state-run medical institutions. Additionally, the Karnataka government had pledged to permit housing of 700 medical students who returned from Ukraine in 60 of the state’s medical schools. However, students say they need a “permanent solution” that would allow them to finish their studies.