Lauded as a historic move to tackle the problem of nutritional deficiency in India, the Government of India announced to implement fortification of rice in the country. 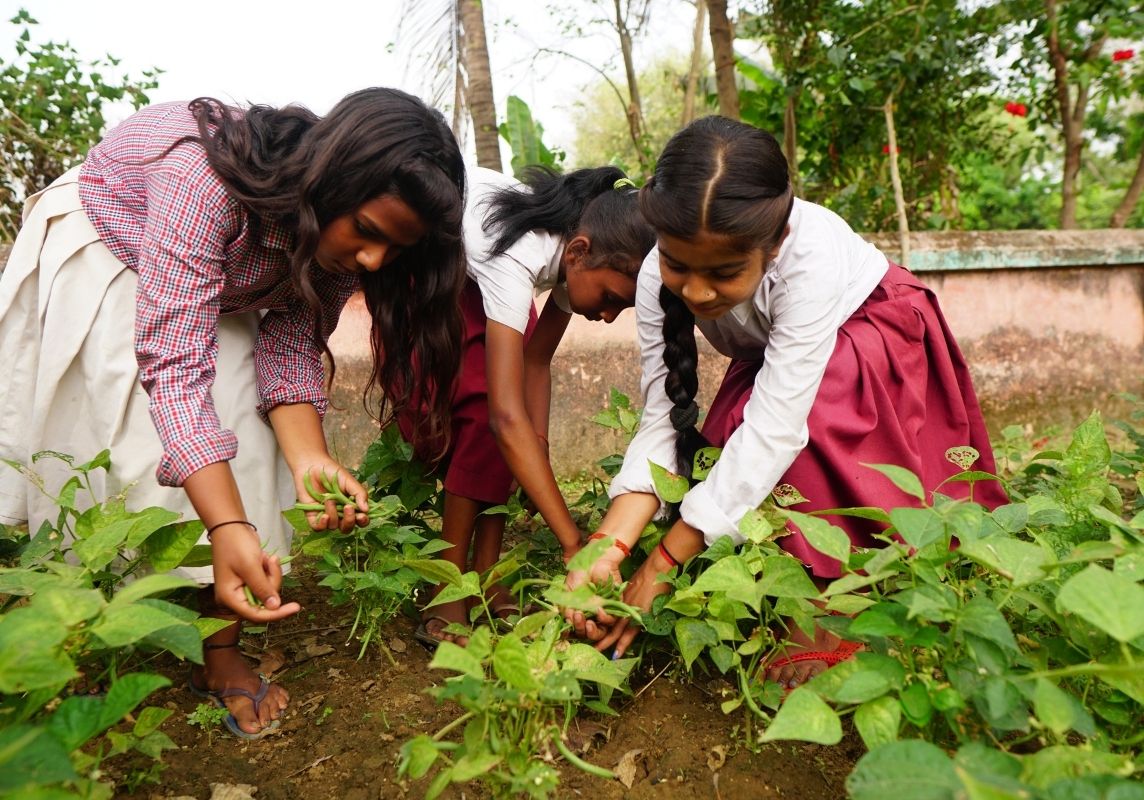 Mohan Chandra Borah, an Assamese farmer wearing denim jeans paired with a tucked-in shirt, asks, “hey, do I look like a farmer?,” laughing out loud before I could respond to him.

He pokes fun at journalists who bat in favour of the establishment and question farmers on their attire rather than discussing their problems and challenges. Borah is recognised as a ‘Rice Warrior,’ so-called because of the range of near-extinct and endangered varieties of native rice he stockpiles.

The farmer has established an indigenous seed saving library, which works to collect and promote the cultivation of these diverse but threatened rice varieties. His library boasts of over 250 diverse rice seeds, most native to Northeast India.

I ask Borah if he is aware of the government’s policy of mandatory rice fortification, “Yes, I have heard about it. It’s a funny decision,” he chuckles. “Our country has hundreds of variations of rice that we are losing on a regular basis. It’s better that farmers are encouraged to harvest, cultivate and conserve different rice varieties. Why focus on only certain kinds of rice and that too ‘plastic’ one.” Borah refers to ‘Fortified’ rice as ‘Plastic’ rice.

Perhaps, ‘Plastic Rice’ for ‘Fortified Rice’ seemingly is the popular narrative in the regions wherever the supply of fortified rice has begun. In Chhattisgarh’s Bastar division, villagers claimed that the fortified rice is uncookable and smells like plastic when cooked, unlike other rice.

Many villagers complained about fortified rice and are avoiding collecting it from the Public Distribution System (PDS). According to a local news report, the local administration has advised those suffering from Thalassemia, an inherited blood disorder caused when the body does not produce sufficient amounts of hemoglobin, to avoid fortified rice.

Similar reports have also emerged from the Khunti district in Jharkhand. Locals from Pahad Tola village have complained of stomach ache, diarrhea and body ache after consuming fortified rice provided by the PDS. “The fortified rice looks different from the normal rice – in its character appearance and difficulty in cooking it. The rice melts with heat as if it’s made of plastic,” the villagers told the Right To Food group, a pan India civil society organization working on ensuring food access to all in Jharkhand. 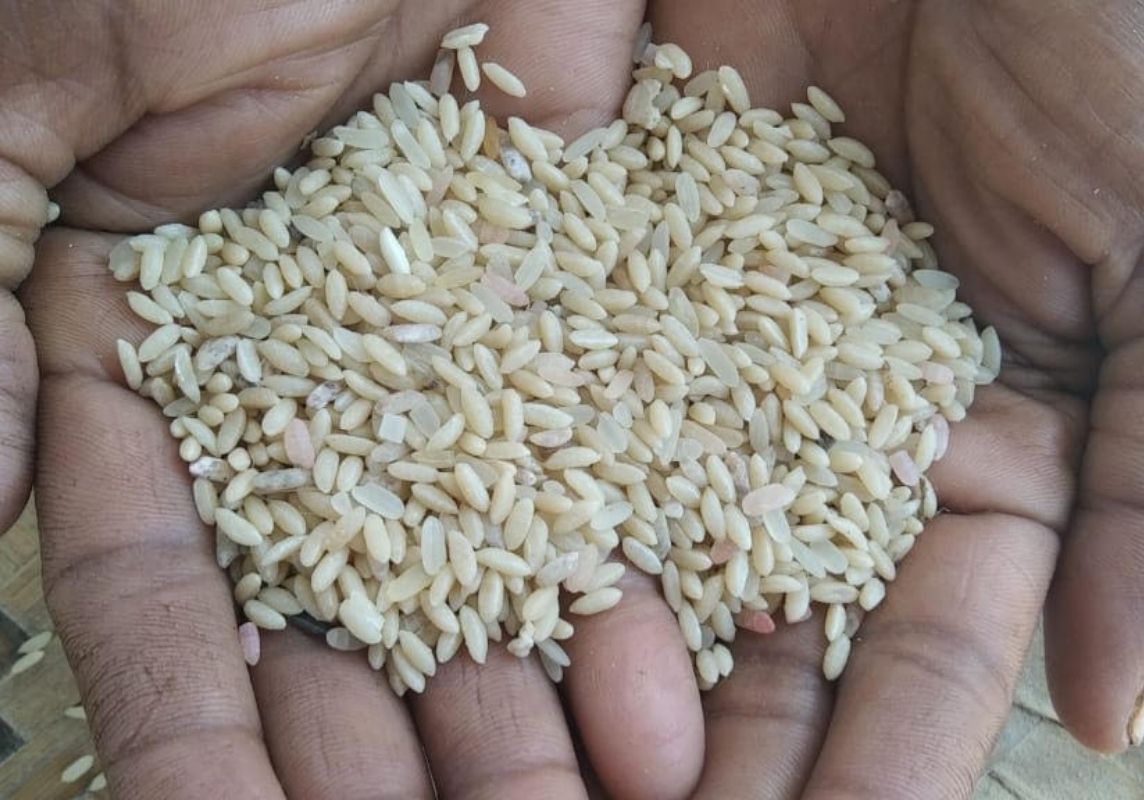 Lauded as a historic move to tackle the problem of nutritional deficiency in India, the Prime Minister, while addressing the nation, stressed upon lack of essential nutrients in the diets of women and children, ultimately hindering their physical development. Hence, to combat nutritional deficiency, fortified rice would be channelised through public distribution systems from Integrated Child Development Schemes (ICDS) — programmes for early childhood care and development — to Mid-Day Meals (MDMs) — a government scheme that provides mid-day meals to primary school-going children to improve their nutritional levels.

“In an ambitious attempt to combat the serious problem of anemia due to malnutrition, PM  Narendra Modi made an announcement to mandate rice fortification in all social safety net schemes by 2024. Rice fortification, a process of adding micronutrients like iron, folic acid and vitamin B12, is an effective, preventive and cost-efficient complementary strategy to address the nutrition problem within a short period,” said NITI Aayog. However, it added that “ensuring access to and affordability of healthy and diverse diets would be the key to a sustainable long-term strategy.”

The government of India has already started an Rs. 174.64 cr Centrally Sponsored Pilot Scheme on fortification of rice and its distribution under PDS for a period of three years in 2019-20. The initial phase was started across single districts in 15 states of the country.

Soon after the government announced the scheme, experts raised pressing concerns, “This is high time that India leads the global fight against climate change and hunger through its science-based diverse, comprehensive and indigenous knowledge. If policymakers go for simplistic, linear, shortcut and false solutions such as rice fortification, this would possibly derail the Indian advances towards tackling climate change and ensuring the well being of people.”

The concerns of the experts are now backed by the Right to Information (RTI) responses from different government agencies as accessed by MoJo.

In an RTI query, the Ministry of Consumer Affairs, Food and Public Distribution clarified that the project was undertaken after the results to the National Family Health Survey-4 and that the pilot project is in its final year.

This makes the government’s enthusiasm to implement the large-scale rice fortification and its success rather unfounded. Without any results to back up their proposal, the Union Cabinet on April 8, announced its approval of the supply of fortified rice in a phased wise manner throughout targeted PDS, under the National Food Security Act (NFSA), ICDS, Pradhan Mantri Poshan Shakti Nirman-PM POSHAN erstwhile MDM and other welfare schemes of center and state government by 2024.

In an another RTI query to the Indian Council of Medical Research, National Institute of Nutrition (ICMR-NIN), the institute clearly mentions that they’ve not conducted any study to ascertain the impact of chemically fortified food on the health of people whether it be pregnant mother, feeding mothers, under five-year children, or even undernourished and malnourished children.

However, in the same response, they said that a double-blind randomized controlled study was conducted in government primary school children on chemically fortified rice served as part of their mid-day meal. But their findings showed, “iron fortified rice has a similar effect as mid-day meal on improvement in anemia.”

It clearly raises doubts on the government’s presumptions that fortified rice could be a significant move in eradicating anemia. Whereas it also means, if the mid-day meal scheme is improvised, added with diversity and effectively implemented, it can boost the fight against malnutrition and anemia. 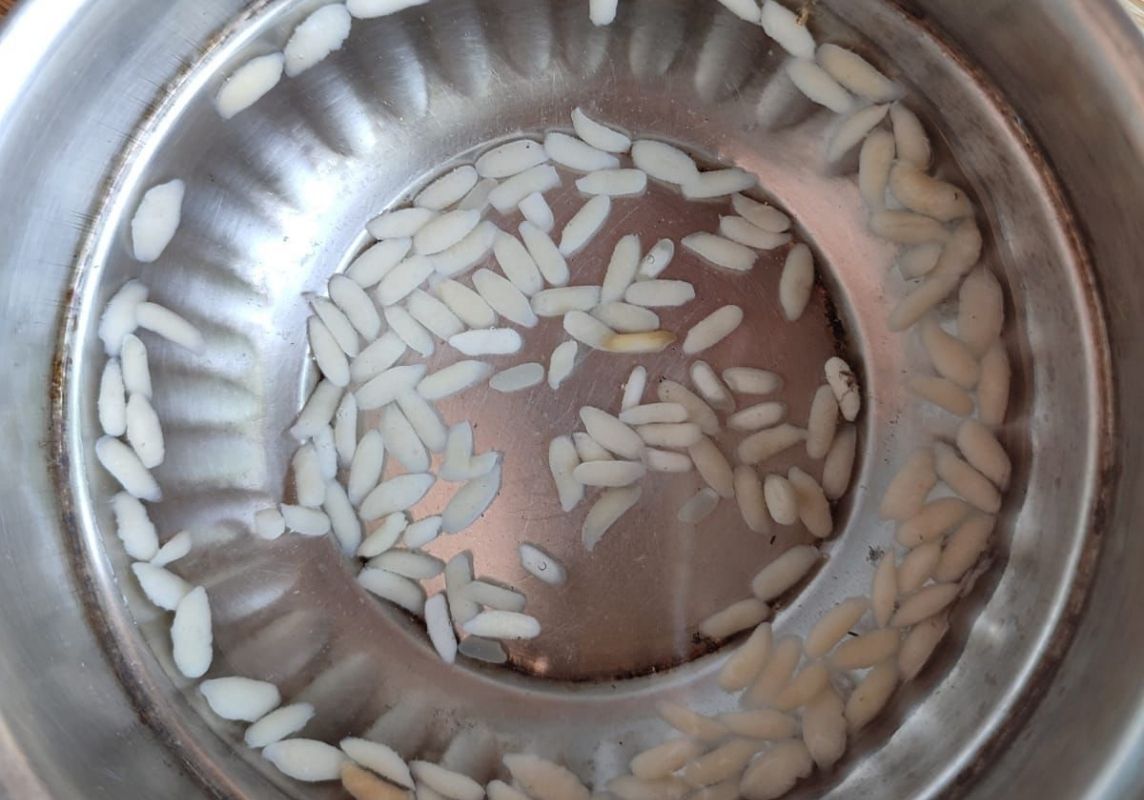 The Union Health Ministry, in 2012, under the National Health Mission, had started distribution of the Weekly Iron and Folic Acid Supplementation (WIFS) Programme. The programme was framed to target school going children and out of school adolescent girls. Using a fixed day approach, iron supplement tablets were given to increase the intake of iron and folic acid. As per the Ministry of Health & Family Welfare, the programme has 11.2 crore beneficiaries — 8.4 crore in school and 2.8 crore out of school beneficiaries.

“This should be a cautionary story for any of the policies including rice fortification formulated as a solution to India`s nutritional deficiency,” says Dr Veena Shatrugna, Former Deputy Director of the National Institute of Nutrition.

Even the examples globally have not been inspiring. A study of Brazilian children under the age of six revealed that iron-fortified wheat had no effect on the prevalence of anemia. The study included four population-based surveys that assessed food consumption and hemoglobin levels over a four-year period. But, the data revealed an unexpected rise in childhood anemia.

Nutritional and health experts have pointed out that any policy devised for ensuring food security has to be framed in a way that it also promotes nutritional security for a longer-term while taking into account the diversity of indigenous crops in the country and protecting the interests of farmers. At the same time, it needs to assure that it does not harm biodiversity.

“Frankly speaking, the rice fortification program announced by the government is not going to uplift the nutritional value in the diet. Adding certain nutrients like B12, folic acid etc. cannot contribute to the overall rise in the nutritional intake of the population. The (un)scientific logic of fortification of rice shown as the most cost-effective way to tackle malnutrition is also classist and casteist in nature. It is coming from a caste corporate nexus,” Dr Slyvia Karpagam, a leading public health expert told MoJo. “Premixing of micronutrients is opening a profitable market for the corporates of India as well abroad.”

As per media reports, the proposed rice fortification program in India will create a market of around Rs. 1700 crore for corporates. Big organizations like Tata Trusts are already collaborating and working with the government on multiple rice fortification drives in different parts of India.

“The fortification project is not formulated from a medical science point of view. Any one food item cannot provide all adequate nutrition. Solutions to anemia, hunger and malnutrition can only be resolved by introducing nutritious food items like several cereals, pulses, fruits and even animal diets into the diet rather than looking for a one bullet solution like fortification,” Dr Veena Shatrugna, Former Deputy Director of the National Institute of Nutrition told MoJo.

She also appeals to the scientific community and health experts to come forward in denouncing such kind of pseudo scientific corporate blacked schemes.

American Journal of Clinical Nutrition in July 2021 said, the decision of compulsory rice fortification is ignorant regarding the pivotal role of dietary diversity in addressing the problem of nutritional deficiency. The paper, consisting of around 18 expert opinions, also maintained that there was the minimal difference that could be made possible through the fortification of rice without an added diversification in the diet.

The Alliance for Sustainable and Holistic Agriculture (ASHA), a coalition of over 400 organizations that promote natural farming in a letter to the Food Standards and Safety Authority of India (FSSAI) said, “Isolated and artificial introduction of certain nutrients would not alleviate India’s malnutrition problem because of the country’s food and health status.” They also warned the government that fortifying food instead of modifying how it’s grown and processed might cause major health consequences.” A meta-analysis of data from numerous rice-eating nations showed that iron, vitamin A, or folic acid enriched rice had no effect on anemia and had a little effect on Vitamin A deficiency,” they said.

Greenpeace India recently in its report, Adding Diversity to Plate, suggested the already available alternatives to mandatory rice fortification — reintroduction of millets in the diet of people, encouraging more diversity to the plate keeping in view the vast plural culture of the country, and expansion of nutritional kitchen gardens. The report called Rice Fortification as a ‘ridiculous’ exercise, and called for addressing the problem of anemia, malnutrition and hunger through diversified and indigenous food practices — also in a way that supports both the consumers as well as farmers. 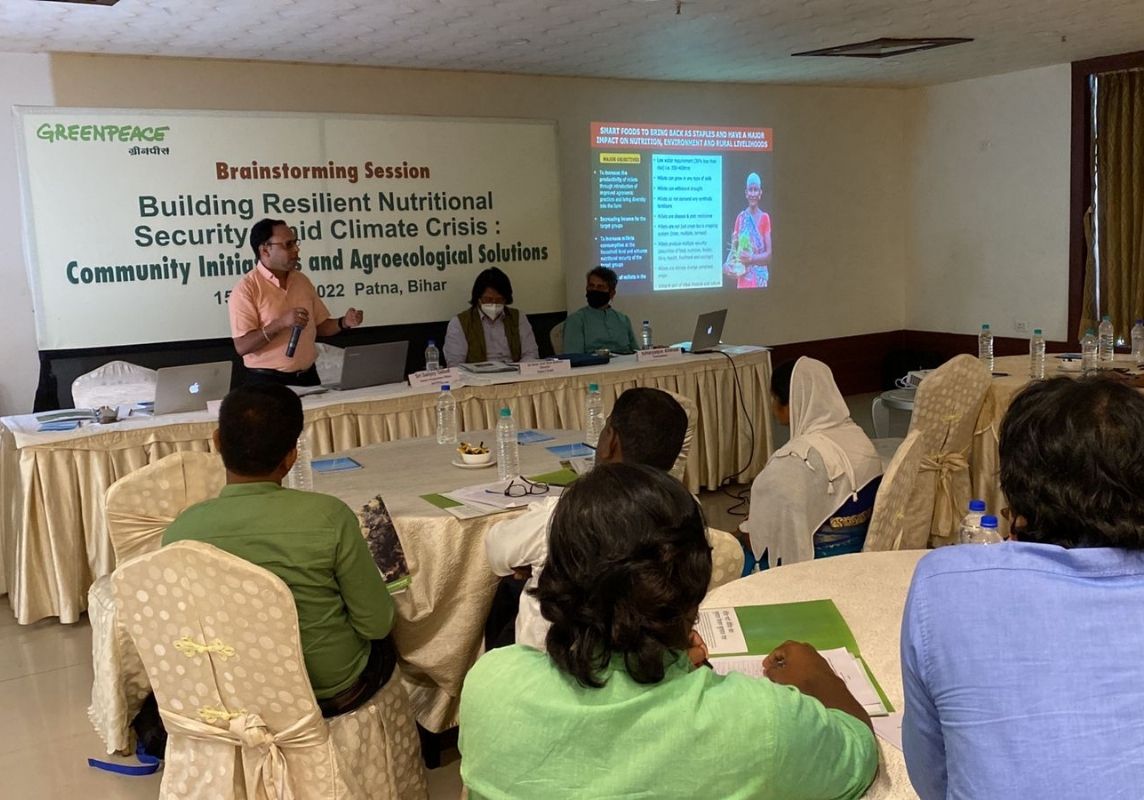 “Climate-induced extreme weather events are having a cascading effect on the purchasing power of farmers, food availability and rising food prices, and ultimately resulting in a bigger food and nutritional crisis, hence, the government must be prioritizing indegenous crops that do not harm health and biodiversity but also protects the interests of farmers,” said Ishteyaque Ahmed, Senior Food for Future Campaigner at Greenpeace India.

Karnataka: The Boiling Battleground of Hijab vs Scarf
The Boatmen of Yamuna