Urban Company May Lose the Women That Made It

Protests by female ‘partners’ of e-commerce platform Urban Company have raised a question on the value of the female labor force in the gig economy.

On one of the coldest nights Delhi witnessed this winter, a few women sat outside the gates of Urban Company’s Sector 20 office in Gurugram, protesting against the e-commerce platform’s latest policy changes.

Sharing blankets, water, and posters with slogans on them, about 150 ‘Beauty’ category workers of Urban Company sat at the venue for two days before being sued by the platform for, what the latter termed as, “illegal” protests. 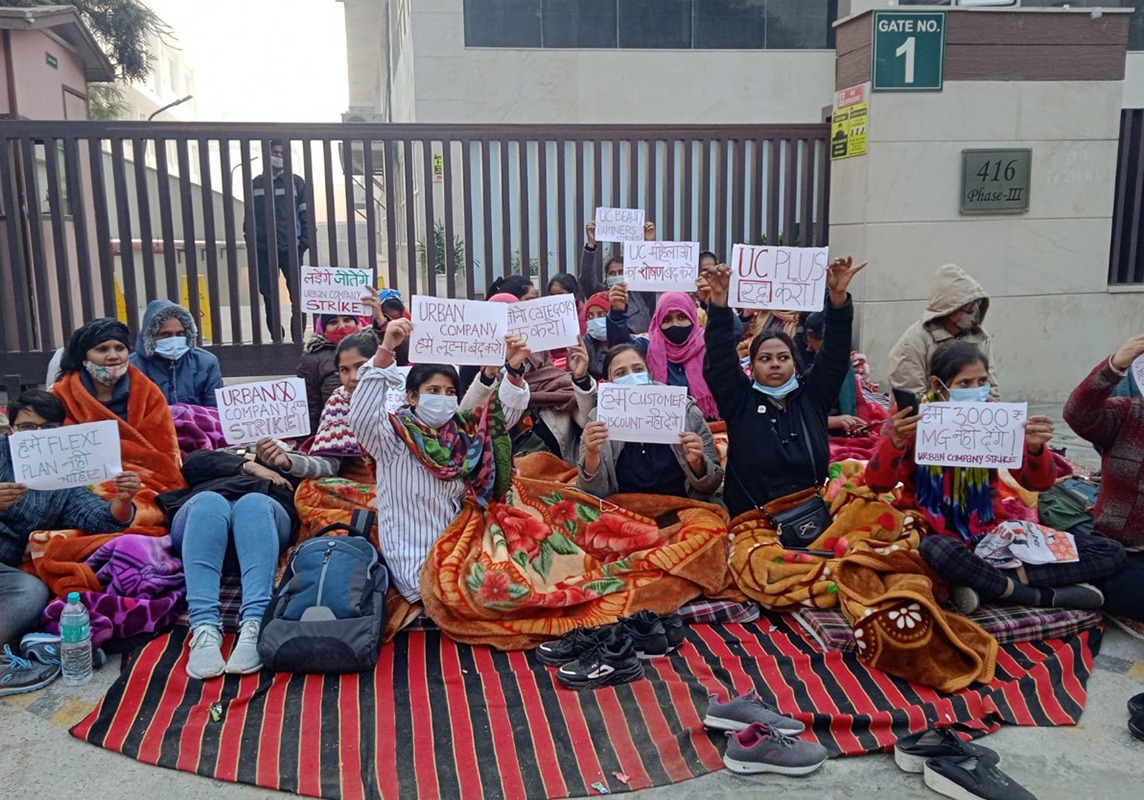 The platform is hurting the women who made it,” said Seema Singh, one of the four female protestors who was served a notice by the company. One of India’s largest home-services providers, Urban Company filed a lawsuit in the Gurugram District Case this week that sought for a permanent prohibitory injunction of any demonstrations, rallies, or dharnas near or inside its office premises. Ever since, Seema, who has been Urban Company’s ‘partner’ for almost four years now, has been advocating if it is time to leave it.

“The company has not sent a notice to my house yet. We had to disband the protest temporarily, but I am ready to respond to them legally if it comes to that. It is our work that made the company, but they still don’t realise they are losing the diamonds that built them,” Seema said. She has been providing at-home salon services as a gig worker with Urban Company.

The latest policy change that reportedly asked all salon and spa category workers to pay Rs 2000-3000 in advance and attend to at least 40 clients every month was introduced by the company in December. If a ‘partner’ is unable to deliver them, then they would lose this deposit and would be put into the ‘Flexi’ category of workers. This newly introduced category would only allow them to work on Fridays, Saturdays, and Sundays. The workers we spoke to told us that they were called to the UC office in groups of ten and were explained these rules, which would be implemented from January onwards.

“The new rules would mean a drastic drop in our monthly incomes,” said three-month pregnant Preeti. She has been a beautician with Urban Company for three and a half years and is also one of the four women served with a notice by her employer. “We sat outside the office all night on Monday, but the administration did not even allow us to use the washrooms,” she added. She further said that the staff is trying to divide the workers by making separate Whatsapp groups and alleging instigation.

As per economist Mitali Nikore, the legal action by Urban Company on protesting women signals the fact that female labor is often undervalued. “The conditions in which they are being forced to work is taking away their flexibility. They are trying to merge the hours of a full-time employee with the benefits of a gig worker. But, the company needs to decide what it wants,” she said.

Another salon and spa category worker, Durga Sharma, said that the amount being taken from ‘partners’ every month falls under a ‘Minimum Guarantee’ plan. In a voice hoarse from raising slogans, she said, “My husband and I have worked with Urban Company for years. But after Covid hit, the policies have been changed randomly. Under a similar minimum guarantee plan, my husband was once asked to pay Rs 12,000 to get gigs from the platform.”

All the three workers, Seema, Durga, and Preeti, further added that in the last few months, the gigs they were getting were at the last moment. “At such a point, it becomes difficult to step out. There are times when we get the gigs only one hour before they have been scheduled. If Urban Company gives me gigs one day in advance, I will be able to pull them off with ease,” Seema added.

“This minimum guarantee plan will clearly impact the women workers more, and that is why you can see them protesting. The whole point of the platform was to provide these people with flexible work hours. Now you are taking away this flexibility.” Mitali added.

In a statement released, the All India Gig Workers’ Union said that Urban Company has forced its partners to work on exploitative terms with an opaque commission system. “Even when UC refuses to acknowledge us as employees and calls us ‘partners’, the reality is that we are treated like slaves,” it read.

Urban Company was recently valued at $2.8 billion. This was a rise from its $2.1 billion valuation in June.

“A special commission should be formed by the Ministry of Women and Child Development and we should look into the specific issues of female gig workers,” Nikore suggested. She further added that the lack of female voices in the company’s management may also be a reason for the administration overlooking issues of its female workers.

Seema added that the spa and salon workers have been facing troubles for over six months. “It feels like things won’t change. I want to leave since my talent is being wasted. My talent is what made the company and its money. All the protesting women worked their hardest to convert a single client into ten more. They can steal my clients, but they cannot steal my talent,” she added.

Mojo Story has reached out to Urban Company for a comment but is yet to receive a response.