Women in the Fray: Candidate Profiles in the UP Election

Driving down the old Delhi-Meerut highway in the sugar town of Modinagar, it is hard to spot the dilapidated building that houses the local Congress party office. The contrast with the Bharatiya Janata Party (BJP) office, in the basement of a major local hospital just further up the same highway couldn’t be starker. 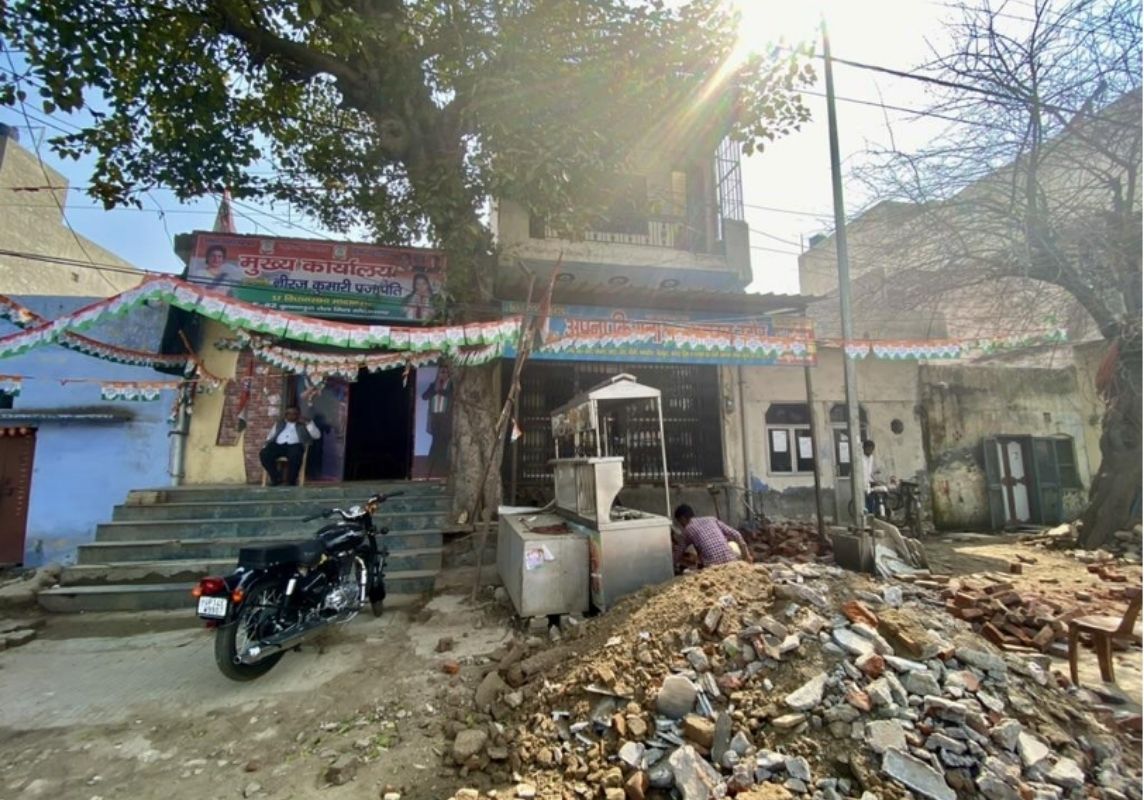 Skirting the pile of rubble at the entrance, we walk in to meet the party’s candidate, Neeraj Kumari Prajapati. Behind her, Priyanka Gandhi Vadra beams down from a giant campaign poster. Prajapati is one of the 155 women candidates that the Congress has fielded in Uttar Pradesh, in line with its promise of ensuring 40 per cent of all seats would be fought by women – though the Congress ended up nominating 38.5% of women candidates. 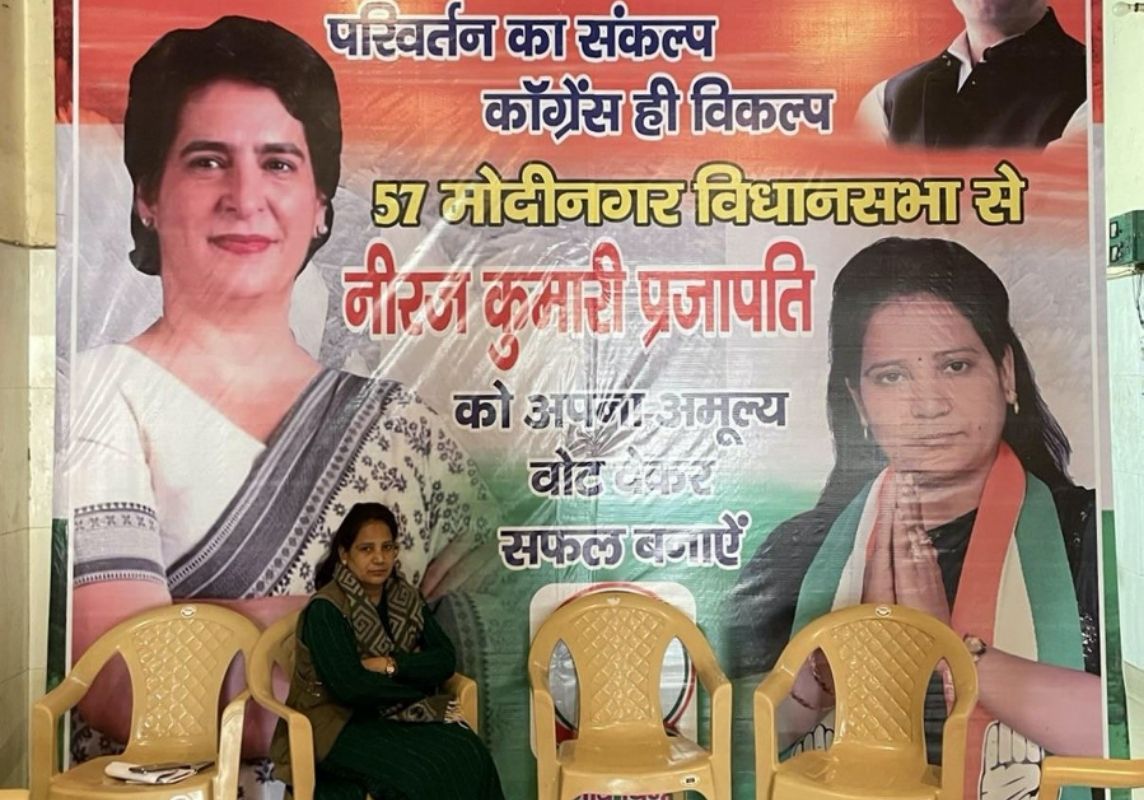 Seen from afar, Prajapati may seem like an odd choice for a candidate: she is a party officeholder who has been out of politics for years, fighting in a seat the Congress has not won since 1985. Incidentally, the MLA that year was a woman, too, Vimla Singh, who no one we spoke to at the Congress office seemed to remember.

Forty-one-year-old Prajapati was a member of NSUI in the late 90s while attending college in Modinagar, but let her political career slide after she got married. Her husband’s sudden death in 2016, in the wake of demonetization, energized her to find her way back into Congress, she says.

Three out of Modinagar’s four major candidates are prominent local women, including the sitting MLA, Dr Manju Sivach, and the Bahujan Samaj Party (BSP) candidate, Dr Poonam Garg. Both women are practising doctors (gynaecologists) and owners of their respective hospitals.

When it comes to candidate selection in a part of the state where caste arithmetic and religious polarization have queered the pitch, winnability is another matter altogether. Dr Poonam Garg, the BSP candidate, feels that communal tensions have been mitigated by the absence of a Muslim candidate. She sees her baniya caste status along with an RSS family background as an advantage in the BSP’s ranks. While the BJP might have been a better fit for her, Garg says they simply weren’t enough of a force in Uttar Pradesh when she joined politics in 2005, motivated by the need to fight the local corruption she confronted while setting up her hospital (The Modinagar seat, however, had been held by the BJP from 1993 to 2007, when the BSP won).

Amongst the three women candidates here, Sivach is the only one to have entered politics through her husband, who sought to fight in Ghaziabad’s local body elections but had to withdraw when the seat became reserved for women ahead of the polls. After she served her term as councillor, the BJP gave her a ticket to contest from the Modinagar assembly seat in 2017, instead of her husband. Sivach says that the BJP’s decision to keep her on as a candidate in a general seat in 2017 was prompted by her popularity as a councillor and active leader of the BJP’s Mahila Morcha for rural Ghaziabad.

Sivach’s strongest opposition comes not from the other women, but from the RLD’s Sudesh Sharma, who represents the seat-sharing alliance with the Samajwadi Party and is a former MLA. 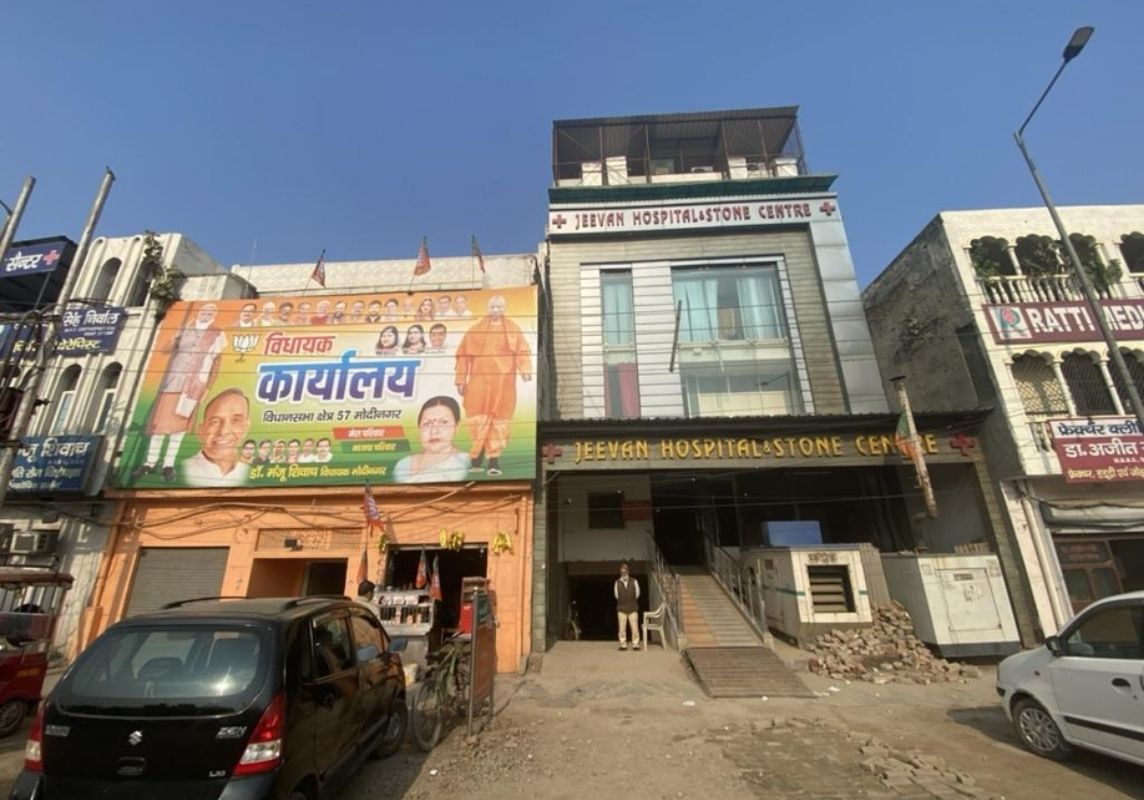 Pitted against a Jat woman candidate fighting for re-election, a Brahmin representing the RLD, and an upper-caste baniya trying to expand the BSP’s vote, Neeraj Prajapati, an OBC, says “I can say with confidence that I have put up a good fight,” when asked if she thinks she can win the Congress a seat in Modinagar. 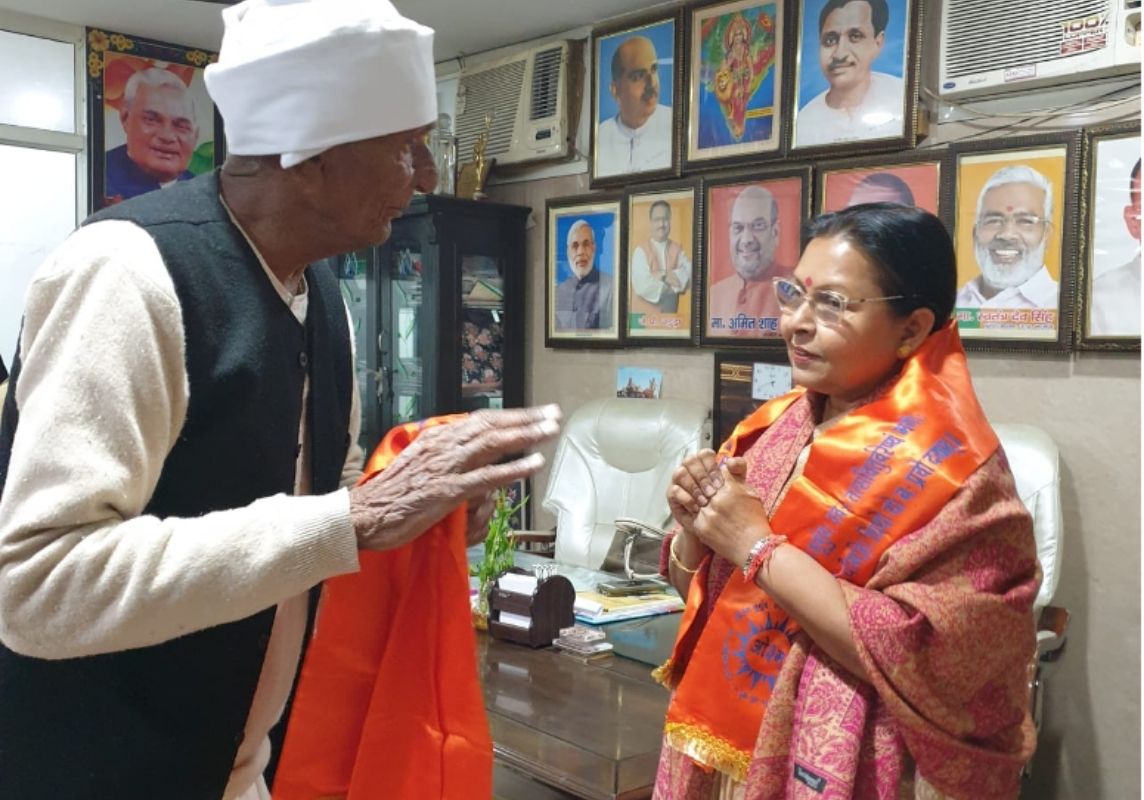 Although they hail from different social and political backgrounds, the three women candidates of Modinagar have some important common characteristics: they are all self-standing candidates, in charge of their own campaigns; they are surrounded by men – relatives and party workers – all in supporting roles.

Both Sivach and Garg entered politics through local body elections, while Prajapati’s political involvement started with student politics. And all of them owe their entry into state-level politics to party engagement and have stayed with their respective political parties throughout their careers.

Barely a hundred kilometres away, northeast of Modinagar, the story changes completely.

Be it shifting political allegiances throughout their careers or finding themselves in the political hot seat as proxies for their husbands, the women candidates of Rohilkhand region’s Bijnor are a study in contrast.

Suchi Chaudhary, for instance, the sitting MLA currently vying for re-election, entered politics five years ago because her husband who really wanted to contest in 2017, was jailed and charged with multiple murders. She states she could not turn down the BJP when her husband negotiated the transfer of his ticket to her, even though her heart was not in it. She was the mother of a nine-month-old baby at the time and had no prior political experience. 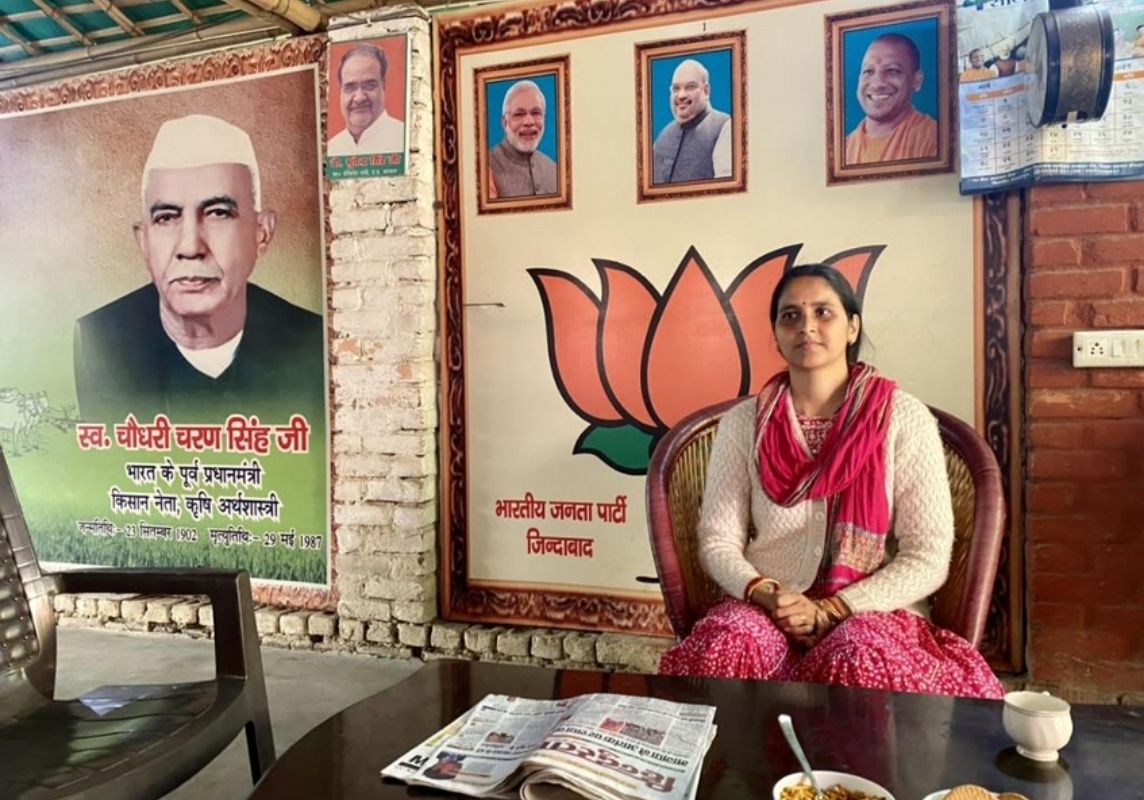 Looking after two young children, and a husband out on bail, Suchi tells us her mission then was to clear her husband’s name, and that while she is happy to fight again and work as an MLA this time, she has no greater political ambitions.

The BSP candidate, Ruchi Veera, is a political veteran – a five-time candidate who has moved from the Samajwadi Party (SP) to the BSP after the SP’s falling-out with Azam Khan, whom she was politically close to. She won the Bijnor seat last in 2014 in a by-election when the then local BJP MLA, Bhartendra Singh, vacated his seat to join the Lok Sabha. In 2017, Ruchi Veera lost to Suchi Chaudhary.

However, the defeat didn’t dampen her keen desire to win an election. In 2019, she ran for the distant Lok Sabha seat of Aonla and finished second. Nor, with declared assets of 25 crores this time, did her losses impact her campaign resources. Veera is by far, the richest candidate in Bijnor, and her husband is a regular face in local body politics. In 2015, he contested and won a Zilla Parishad chairmanship in Bijnor. 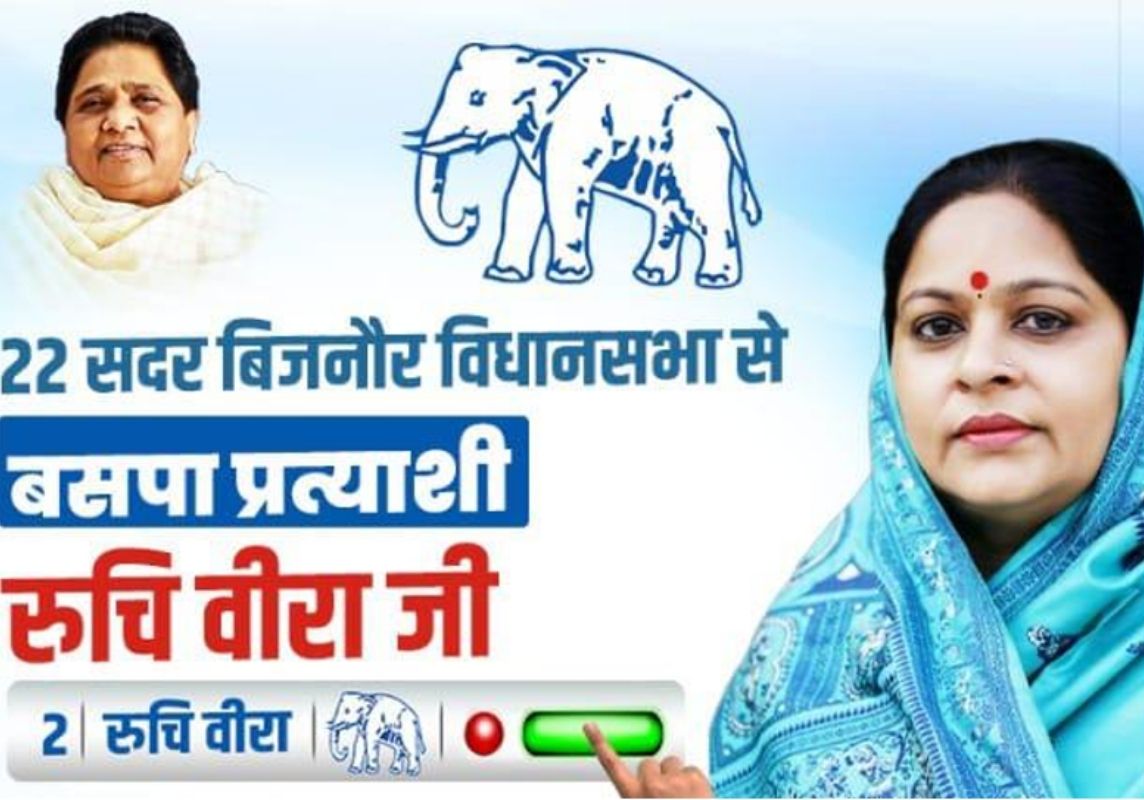 The third woman candidate of Bijnor, Akbari Begum, turned out to be a no-show, as her nomination papers as a Congress contestant were rejected by the Election Commission on grounds of being incomplete. She was the lone Muslim candidate in a seat with a significant Muslim population and had lost her son in anti-CAA protests in the Bijnor area.

It is not unfamiliar for Bijnor city, a district headquarters, to have strong women politicians. In fact, it is home to one of Uttar Pradesh’s most prominent female career politicians, Omwati Devi, who has fought and contested five times from the neighbouring Nagina assembly constituency, albeit from different political parties nearly every time. Starting her career with a Congress win in the 1985 assembly elections, Omwati Devi won in Nagina on an SP ticket in 1996, and ran and won a Lok Sabha seat in 1998 (which she lost in 1999).

She joined the BSP before the 2007 elections and became Mayawati’s solitary woman minister. She joined the BJP in 2013, and finally returned to the Congress ahead of the 2022 elections. However, this time, instead of contesting herself, she has propped up her daughter-in-law, Henrietta Singh, married to a senior IPS officer stationed in Agra, to run in the adjacent seat of Nagina.

When we commented to her husband, R.K. Singh, former chief secretary of the state, that Omwati Devi seemed to have a good sense of which way power shifted in Lucknow before she moved parties, he smiled and said “She went where she found respect as a woman in politics”. 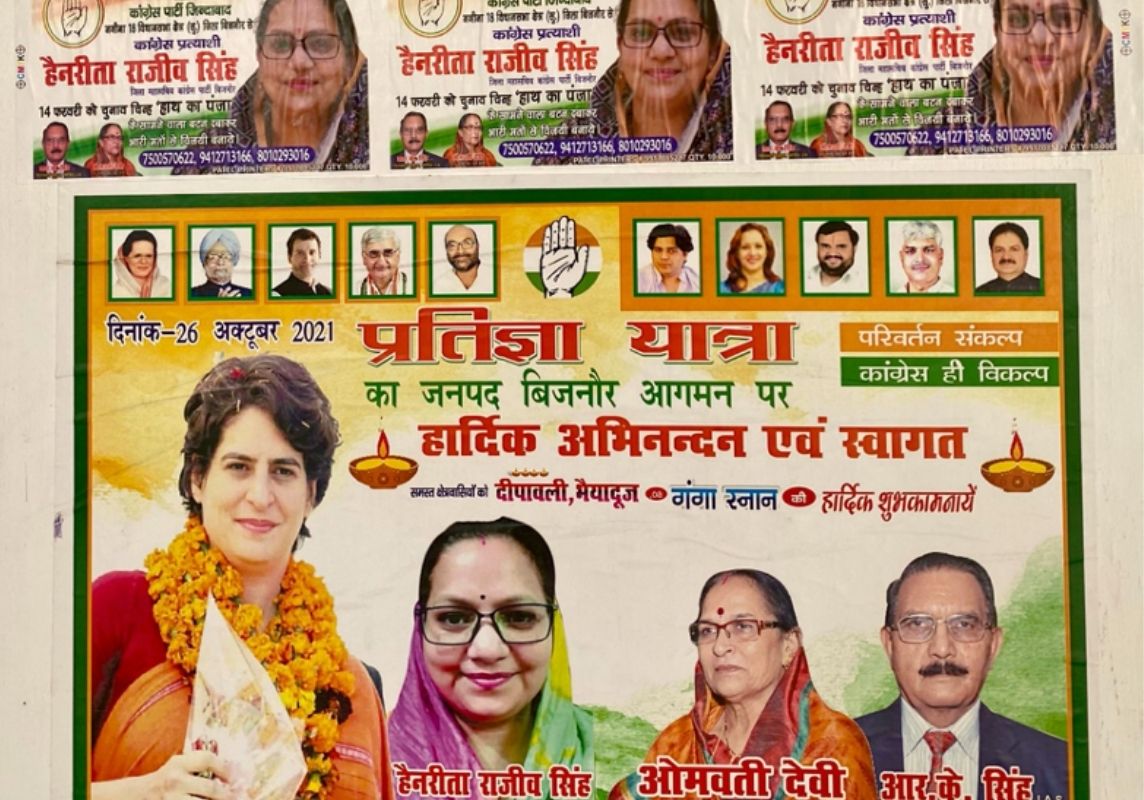 The two seats of Modinagar and Bijnor that we visited offer a glimpse of the diverse profiles of women contestants. Far from conforming to gendered stereotypes of women politicians, the women candidates of Modinagar built their own political careers, drew support from their family and networks like any other candidate, and emerged from sustained engagement with local politics. They also present themselves to voters as professional women, engaged in their communities and committed to promoting women’s independence.

The women candidates of Bijnor, on the other hand, conform in different ways to common perceptions that surround the selection of women candidates. Ruchi Veera is one half of a power couple that combine their respective influence in state-level and zilla politics. Suchi Chaudhary is a reluctant politician prompted by an ambitious but encumbered husband. Akbari Begum, who ultimately could not contest, also exemplifies a common reality – many candidates once selected are left on their own to run their campaign. In her case, Congress did not even ensure that her nomination papers were in order.

These portraits also tell us that women contestants share commonalities with their male counterparts. Some conform to political stereotypes, while others do not. All are individuals who seek to live up to voters’ expectations, run their own campaigns, arrange their own funding, and build their political careers over time. Some step into politics through unexpected circumstances.

The results on March 10 will tell us whether we will see them in the new assembly. While one does not expect a dramatic increase in overall women representation due to the generally low nomination rate from parties other than the Congress, the few women who succeeded in overcoming the hurdles strewn along the path women traverse in politics stand as much chance of winning than any other candidate.

Gilles Verniers is Assistant Professor of Political Science and Co-Director of the Trivedi Centre for Political Data at Ashoka University, and a Senior Visiting Fellow at the Centre for Policy Research.

Maya Mirchandani heads the Department of Media Studies at Ashoka University and is a Senior Fellow at ORF.