Who Is Pooja Singhal, The Suspended IAS In ED’s Net 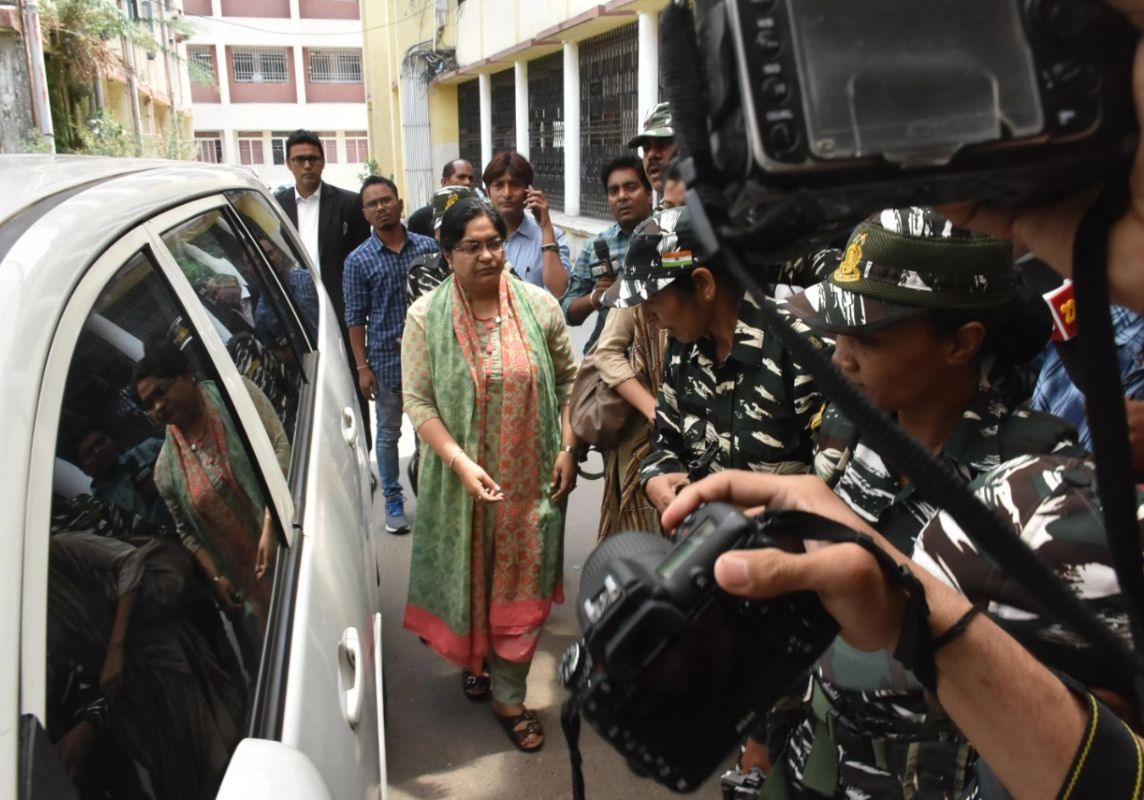 Pooja Singhal is a suspended IAS officer of 2000 batch of Jharkhand cadre. She has many serious allegations based on MNREGA scam, illegal mining and money laundering in Jharkhand. In view of these allegations, IAS Pooja Singhal was arrested by ED on 11 May 2022.

It may be noted that on May 6th, ED raided the locations related with Pooja Singhal and her associates. Then ₹19.76 crore was recovered from the whereabouts of his chartered accountant Suman Kumar. After this, ED interrogated Suman Kumar for 14 days by taking him on remand.

On May 12th, the arrested IAS officer Pooja Singhal was suspended from the post of Mines and Industries Secretary by the Jharkhand government with immediate effect. The arrest was mentioned under Section 19 of the ‘Prevention of Money Laundering Act – 2002’.

But, according to the latest updates, on 1st December 2022, the ED has attached the immovable properties of suspended IAS officer Pooja Singhal worth Rs 82.77 crore.

Timeline of the Pooja Singhal case

Year 2010: On September 18, 2010, a case of irregularities of ₹10.16 crore was registered in MNREGA. After the matter came to light, the then Chief Minister Arjun Munda ordered an inquiry into it, which later reached the High Court. Court sought affidavit from ED and ACB. Then ED told the court that the role of Pooja Singhal in the whole case is being investigated. At the same time, the ACB told that they were not ordered to investigate any case related to the MNREGA scam.

Year 2011: 16 FIRs were registered against JE Ram Vinod Sinha in connection with MNREGA scam in Khunti district. But, Ram Vinod was interrogated, but not arrested.

Year 2012: ED registered a case against IAS Pooja Singhal under the ‘Prevention of Money Laundering Act’. In which Pooja Singhal was booked under criminal sections related to cheating and corruption under the Indian Penal Code.

Years 2013-2020: ED continues to investigate the scam to gather concrete evidence, as well as keep an eye on all the accused.

06 May 2022: Apart from the locations of Pooja Singhal and her husband Abhishek Jha, the ED also raided their chartered accountant Suman Kumar’s residence and other close ones. During this, Rs 19.31 crore cash was recovered from CA Suman’s house & he was then arrested.

07 May 2022: ED raided 25 locations in five states related to Pooja Singhal and seized many important documents.

At that time, apart from Pooja Singhal’s residence, her husband Abhishek Jha’s Pulse Hospital in Ranchi was also raided. During this, apart from the huge amount of money, the investigation agency also came to know about the investment made by both the husband and wife in several flats. The matter of getting investment papers worth about 150 crores also made news headlines.

9th to 11th May 2022: On 9th May, Pooja Sanghal reached ED’s office to record her statement. During this, the questioning of Pooja Singhal continued for two consecutive days. But on the third day i.e. in the evening of May 11th, Pooja Singhal was arrested by the ED.

12 May 2022: Former Jharkhand Chief Minister Raghuvar Das accepted that his government had conducted a departmental inquiry against IAS Pooja Singhal by a committee headed by the then Additional Chief Secretary. At that time, the committee had given a clean chit as not getting proper evidence against her, which was accepted by his government.

5 November 2022: In the case of the MNREGA scam in Khunti, a charge sheet was also filed in the court on behalf of the ED. In which along with Pooja Singhal, her husband Abhishek Jha was also made an accused. Taking cognizance of the ED’s charge sheet, the court issued summons to all the accused. To avoid arrest, Abhishek Jha filed a petition and pleaded for anticipatory bail. But the court of Special ED Judge Prabhat Kumar Sharma rejected his anticipatory bail plea.

1st Dec 2022: ED has attached properties worth Rs 82.77 crore to suspended IAS officer Pooja Singhal. These assets include a super specialty hospital, a diagnostic center and two plots of land in Ranchi.

December 2, 2022: The suspension of suspended IAS Pooja Singhal extended for the next 156 days from December 2 after being sent to judicial custody by the ED in MNREGA scam and money laundering case. This step was taken by the review committee of the state government in the light of the guidelines of the Ministry of Personnel, Government of India. From May 25, 2022, Pooja Singhal is lodged in Birsa Munda Central Jail of Ranchi.

In the shadow of the MNREGA scam, Pulse Hospital is the most highlighte in the capital Ranchi with IAS officer Pooja Singhal. In fact, with the action of ED, the matter reached the land of Pulse Hospital, whose nature was described as Bhuinhari. On 13 February 2020, a person named Narayan Vishwakarma requested the CM through a tweet to take cognisance regarding illegal purchase and sale of Bhuinhari land. CM Hemant Soren ordered the then Ranchi DC to investigate the entire matter.

Ranchi DC informed the CM through a letter on 20 February 2022 that the investigation report of the land of Pulse Hospital is being sent. 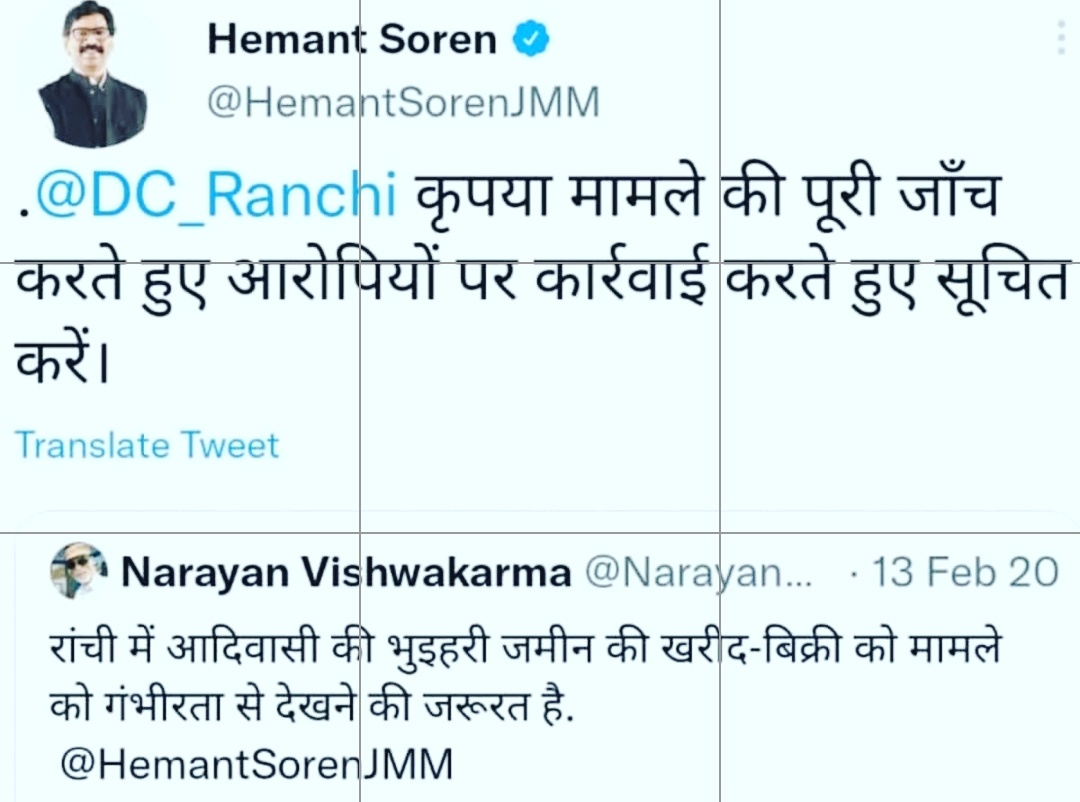 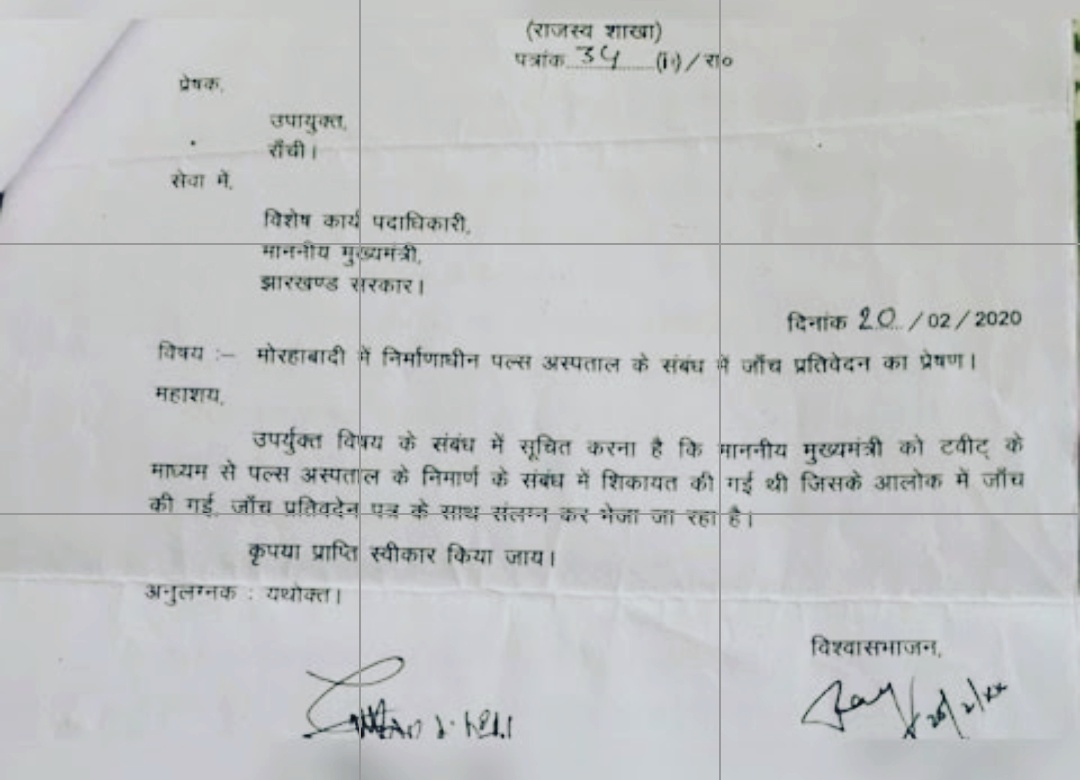 But no action was taken in spite of investigation report in the matter of land of Pulse Hospital. But after the raid in CA Suman Kumar’s residence and Pulse Hospital, the multi-storey buildings built on the Bhuinhari land around it came under scrutiny.

The record of Bhuinhari Nature’s land does not come in the record revenue of the state government. That is, this land cannot be bought and sold, so the Bhuinhari land remains with the original owner or his descendants. One of the important point is that Bhuinhari land cannot be transferred even among tribals, nor has there been any rules for transfer. According to Section 48 of the CNT Act prohibits the sale of Bhinhari land in Jharkhand. The British made a law in 1869, which is known as the Chhotanagpur Tenure Act i.e. CNT Act.

But according to the present deed, on 7th September 1956, the land of Pulse Hospital was transferred to Umacharan Mallick in the name of building and structure. Presently this land would have been in the name of his son Ranjit Mallick, but on 2 April 2018, 30 decimals were transferred to Sanjeevani Health Care Center and 3 decimals to Amita Jha, who is mother in law of IAS Pooja Singhal, on behalf of Taapsee Mallick, wife of late Ranjit Mallick and her daughter-in-law, Olivia Mallick. But it is being told that an agreement was made with the Mallick family with Panchavati promoters, after which the deal was done with Pulse Hospital. However, the nature of the land is Bhuinhari, therefore this registry should be considered illegal.

However, the Enforcement Directorate issued an order to temporarily confiscate Pulse Hospital and Pulse Diagnostic running under Sanjivani Health Care Pvt Ltd on charges of money laundering. The attached properties include the equipment and machines installed in the hospital and the land purchased in the name of Abhishek Jha. The value of the seized property has been estimated at Rs 82.77 crore.

According to the investigation, money laundering activities was done by IAS Pooja Singhal using banking channels to justify her illegal income. She deposited cash in the bank accounts of her husband Abhishek Jha while being the Deputy Commissioner in Palamu. To make Pooja Singhal’s illegal income correct, Abhishek Jha described it as the amount earned by himself in Australia. 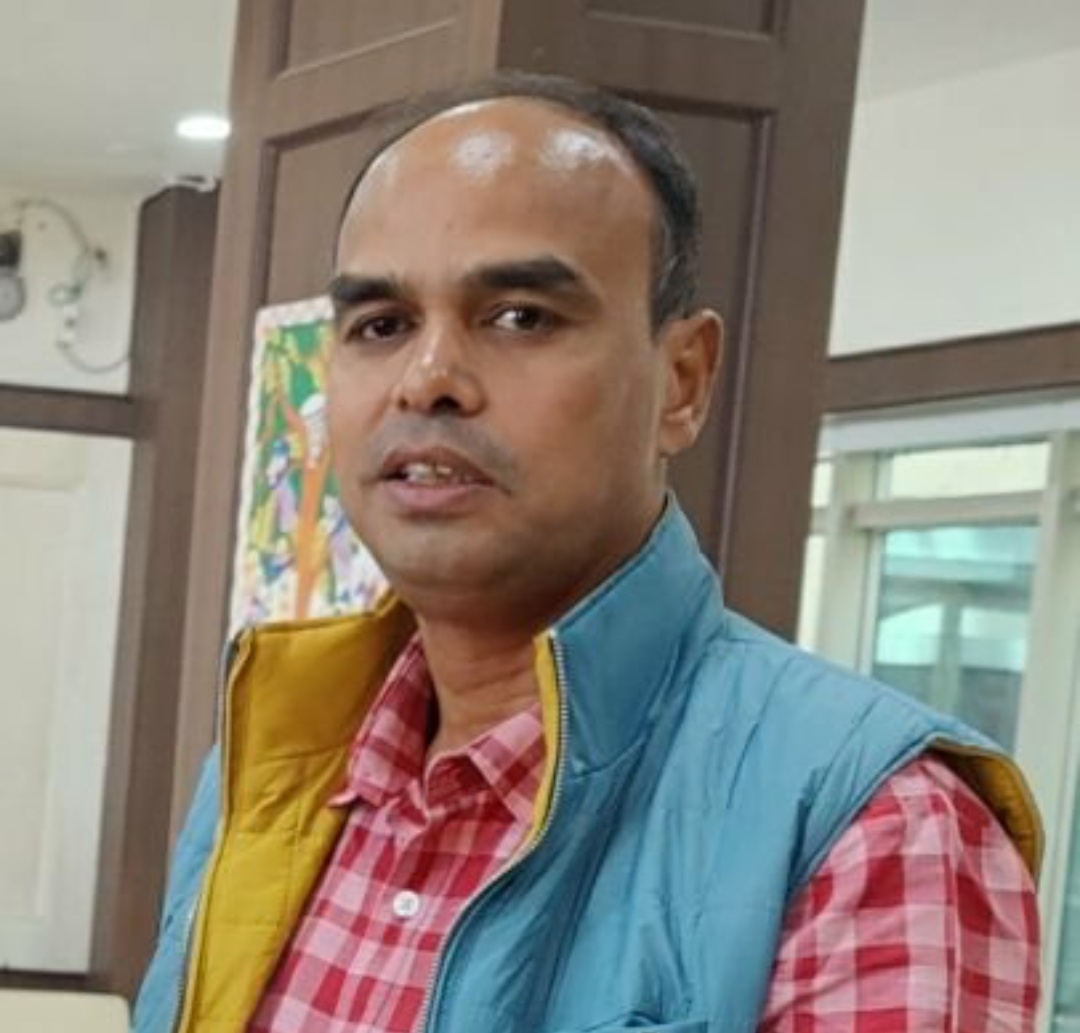 MLA Vinod Singh said on the serious allegations leveled against IAS Pooja Singhal that in 2011, along with MLAs Arup Chatterjee and Janardan Paswan, I went to Chatra on behalf of the assembly committee to inspect the papers. During the inspection, I found that crores of rupees were paid in advance by the then Deputy Commissioner Pooja Singhal to two NGOs under MNREGA scheme. While the picture of the work was not visible in the work report.

He further says that the three of us saw in some villages that many schemes were not on the ground, even if some wells were found half-complete, the laborers did not get their payment. While the amount had been withdrawn in the name of all those schemes. Then all of us submitted a brief report to the Rural Development Department and demanded a high-level inquiry.

MLA Vinod Singh further says that I raised the question in the assembly on the basis of the facts of the investigation. After this, the then Commissioner Hazaribagh Dr. Nitin Madan Kulkarni was entrusted with the responsibility of investigation. He considered Pooja Singhal completely responsible in his investigation. Meanwhile, a report of MNREGA scam came out from Khunti, the surprising fact is that at that time the Deputy Commissioner of Khunti was Pooja Singhal.

MLA Vinod Singh then raised the question that an FIR was lodged against Junior Engineer Ram Vinod Sinha, but why no any action was taken against senior officer Pooja Singhal.

The MLA said that by then complaints of irregularities had come to the fore in Palamu district as well. I asked the government why no action was taken against the officer? The government replied that the Department of Personnel is reviewing the matter.

“During the year 2012, our question related to the scam used to be on the list in the Vidhansabha, but before the number came up, the House would get adjourned due to uproar on any other question, and I could not ask the question,” the MLA further said.

Arup Chatterjee also tried to take up the matter during the tenure of CM Raghubar Das in the last assembly. MLA Vinod Singh further says that the matter kept getting postponed during the then government. Rather, instead of taking action on the basis of IAS Nitin Madan Kulkarni’s investigation report, another investigation was conducted and it was covered up & Clean chit was given to Pooja Singhal

“The most important point is that no action was taken on a report that has to be prepared by the tjen commissioner Dr. Nitin Kulkarni, and to safe Pooja Singhal, another inquiry was set up, so she was safed till date from any action.” Vinod Singh said.

How satisfied are you with the action of ED against Pooja Singhal, who is now in jail? In response to this question, MLA Vinod Singh said that “when the cases of such scams come to the notice of the government, instead of taking immediate action, the existing governments make more use of corrupt officials. This is what happened in the case of Pooja Singhal, the Raghuvar government or the previous governments kept using officials for their own benefit.”

What does the then commissioner who made the report on the scam say?

According to the commissioner, an NGO gave a proposal for the cultivation of Jatropha. DC Pooja Singhal transferred three crore rupees from MNREGA fund to NGO.

The then Commissioner says that basic investigation of NGO should be done on such a proposal, where and how will you do Jatropha plantation, what is your presence. But DC did not do this.

Dr. Kulkarni further says that at that time the lower officials wrote that a report should be taken from the local BDO regarding Jatropha plantation. But DC did nothing.

According to commissioner he was the commissioner at Chhota Nagpur at that that time. He wrote in his report that file shows that everything that has done by IAS is beyond the rule. DR. Kulkarni said that you could not trace where the crores of money went after going into the NGO’s account.

According to the Commissioner, the Rural Development Department re-examined such scams related to Pooja Singhal in Chatra and Khunti districts in 2013. Mr. Kulkarni said that reexamination has confirmed that my report was correct, and the activity done by IAS Pooja Singhal was extremely shameful.