State Units in Crisis: Congress’ Revival unlikely to come from above

The Lakhimpur tragedy has provided Congress an opportunity to resurface in Uttar Pradesh. However, the visits of Rahul and Priyanka Gandhi cannot substitute for the lack of organisation of India’s second national party in India’s largest state. Similarly, the Congress’ ongoing imbroglio in Punjab is revealing of a deeper, more serious, organisational crisis. At the heart of this crisis is the inability of the party’s de facto president to make his ideas on the Congress’ reorganisation prevail.

This translates into indecision and clumsy manoeuvres that, at the end of the day, weaken the party’s electoral prospects as a whole. This also prevents it from effectively playing the role of the main opposition.

Ever since he became an MP in 2004, Rahul Gandhi has sought to cultivate a circle of faithful aides and political friends, drawn from some of the most prestigious political families from the party or from his own age group, to groom the next generation of Congress leaders.

The support extended to these gen-next political figures often put him at odds with certain party veterans who do not display the same deference to him as they did, or still do, to his predecessors.

As a result, Rahul Gandhi’s ideas about state unit reorganization or the handover of power to younger generations in the party have often been met with resistance from the old guard. To make matters worse, the Congress’ electoral decline since 2014 has further undermined his capacity to impose his decisions or even wishes.

There is a long history of interference from the party high command in state units. In the past, many chief ministers and state unit presidents have been made and unmade by decrees from 10 Janpath or from Akbar Road. Dismissing chief ministers was a means to take control of a factious state party unit, or a way to send messages to other chief ministers, to remind them of their own political mortality and incentivize them to stick to the party line.

The situation today is very different. The Congress has few chief ministers and the party’s top brass is in limbo, without the strength or the legitimacy to dictate its will to regional units.

Seven years after the 2014 election, the Congress has shown no sign of recovery – quite the contrary. The decline in state elections that followed the 2014 defeat has continued after 2019, despite good showings in some states.

In the last electoral cycle (since 2017), the Congress has lost vote share in twenty-one states, out of thirty. Since 2014, It has almost completely disappeared from five states it used to govern, either replaced by the BJP or by a breakaway faction it failed to keep in its fold.

The states in which the Congress made gains over the past five years tend to be those where the party still has recognizable regional leaders, who do not owe their position, strength and legitimacy to the Gandhi family. 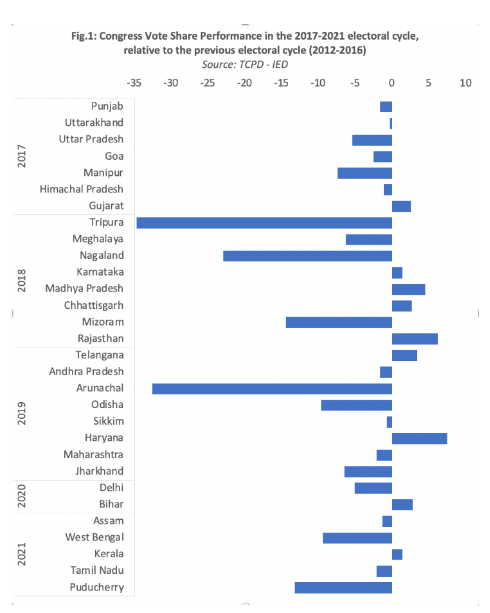 Far from supporting these few remaining regional leaders, the party high command has often sought to undermine them, providing support or making promises of support to local rivals and secondary political figures, often but not necessarily close to the family. By doing so, they have encouraged internal bickering, factionalism and dissension.

In Punjab for instance, the high command saw the incumbent chief minister as a figure of the past and a liability for the immediate future. But unable to convince him to step down or to make way, they sought to upset him by appointing Navjot Singh Sidhu, a talented but notoriously unreliable political figure, as party state president.

Instead of sorting out its electoral strategy for Punjab internally – including its choice for future chief minister – the Congress’ leadership created local chaos and turned an internal feud into a very public drama. For a while they seemed to have succeeded in salvaging the situation with the appointment of Charanjit Singh Channi as Punjab’s first Dalit chief minister, but this hope was swiftly dashed by both Amarinder Singh, bruised and deeply disgruntled, and Navjot Singh Sidhu, who quickly resumed his usual capricious antics.

Beyond the predicament of the Congress’ top leadership, this episode also reveals how difficult it is for a party out of power to manage factionalism. When in power, party leaders can empower a faction in a state and give something in return to the other factions.

A chief minister’s local rival can be given a plum position elsewhere, or even a portfolio in the Union Cabinet. Since 2014, the Congress no longer possesses such resources.

Consequently, the stakes for non-governing faction leaders in state units are much higher, while the incentives to stick with the party diminish. This explains why so many travelling companions of Rahul Gandhi have chosen different paths in recent months. Some shifted towards the BJP, others switched to regional parties like the Trinamool. Others defected from active politics altogether, seeking other ways to build their own future.

One cannot tell at this stage the effect that the Congress’ situation in Punjab will have on the election. It is safe to assume that this bad slapstick comedy is not helping, even though the Congress’ adversaries are dealing with serious problems of their own.

But there is another state where similar turmoil is brewing. In Chhattisgarh, the state unit is divided between a chief minister whose stature has grown since his election in 2018, and a rival who seeks the intervention from Delhi to keep a promise that was allegedly made to him: to make him chief minister in rotation at mid-mandate.

The Congress now has an opportunity to not repeat the same mistakes, by not seeking to undermine a legitimately elected chief minister by propping up a weaker loyalist.

This moment in the life of the Congress should call for an examination of its political culture. Beyond the question of the ability of Rahul Gandhi or other members of his family to impose their choice for regional leadership is that of whether they should have this power at all in the first place. The party cannot recover some of its lost ground by sabotaging the few regional assets it has left, particularly in Hindi Belt states where it remains the only challenger to the BJP.

Gilles Verniers is Assistant Professor of Political Science and Co-Director of the Trivedi Centre for Political Data. Views are personal.

The Monarchy is Dead, Long live the Queen
Indian Vaccine Debate in the UK: Racism, Capitalism or an Issue of trust?