Indian Football In A Fix: Here’s Why

India was a sleeping giant trying to find its footing in football until the Indian Super League (ISL) changed the face of the game by uplifting and paving the way for a pan-Indian audience to follow the sport with grit and determination. The sport, however, has devolved into a survival struggle, with a major schism over whether the future of football should be vested in the Reliance-backed ISL or the government-run All India Football Federation’s (AIFF), I-League. 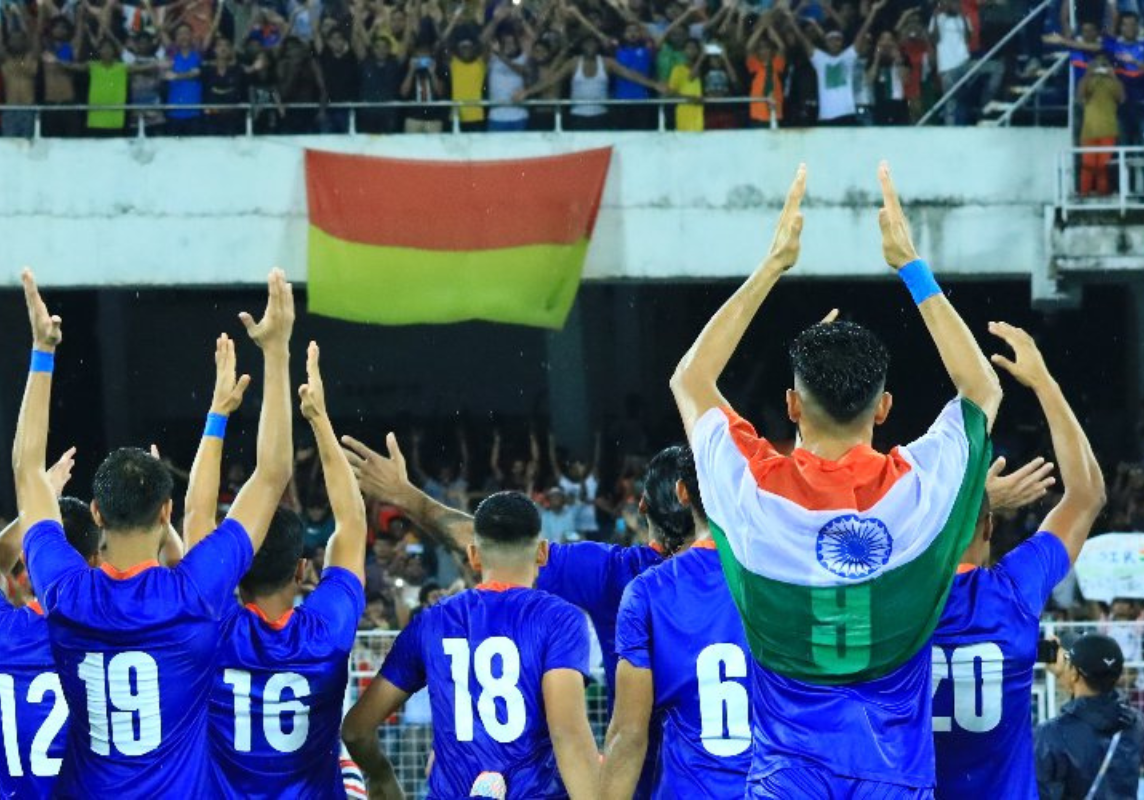 The AIFF and Football Sports Development Limited (FSDL) (which is operated by IMG Reliance, now RISE Worldwide) signed a formal agreement in 2010 for the transfer of football control to the FSDL and setting up of ISL, which finally came into being in 2014 and has remained the top league in the Indian Football System ever since.

However, this harmony was disrupted when Praful Patel, who led the previous AIFF, overstayed his tenure by eighteen months. This led to the matter being elevated to the courts and led to the Supreme Court stepping in to ensure a fairer election process. It also appointed a three-member Committee of Administrators (CoA) to oversee the AIFF’s day-to-day operations, which included creating a new constitution and holding elections.

In 2019, a draft Constitution was released, which proposed that the right to conduct the top-flight league in the land should rest with the AIFF – as opposed to being with FSDL. A newer constitution has been tabled by the CoA in July 2022 however the exact contents of this constitution are not known to the public.

The dispute is now before the Supreme Court, where several parties, including the Sports Ministry, State Football Associations etc., are weighing in on the legitimacy and contents of the CoA’s draft constitution. Senior Advocates Harish Salve and KV Viswanathan, representing FSDL, told the Court that FSDL has a pre-existing contract for conducting the ISL since 2010, which will be extended until 2025.  Further, Senior Advocate Dr Menaka Guruswamy, representing the state associations, informed that in finalising the constitution, the COA has travelled beyond the mandate the courts had tasked it with. While the Football league will remain under the FSDL, or the aegis of the public is yet to be determined.

The entire proceeding is under the looming threat of a withdrawal of FIFA’s recognition. Additional Solicitor General of India Sanjay Jain and Sidharth Singh, Joint Secretary in the Ministry of Sports and Youth Affairs, told the court that On October 11, 2022, FIFA U-17 Women’s World Cup is due to commence and will be hosted by India and FIFA expects that the inauguration of the under seventeen women’s tournament should be carried out under the aegis of a democratically elected body of AIFF. Such a body should be elected by September 2022.

“Democratically elected body should be in function as per FIFA. Otherwise, FIFA may take some action..what we are saying if anything happens, it is severely going to damage the image of the country”, the ASG said.

The key point of division here seems to be between the parties who would like to see the future of Indian Football be retained under the aegis of the Private Sphere, Vis-a-vis those who believe Government may be able to maximize the impetus of the sport.

Since its inception in 2014, the ISL has grown from eight clubs to eleven, from being India’s secondary tournament behind the I-League to overtaking it and from boasting international superstars to giving a push to more Indian players on the field. In its first year, the average attendance at an ISL match was 24,070, with 429 million viewers tuning in on Star TV. In 2015, the average number of spectators per match increased to 27,210. The 2015 season also saw the league’s highest attendance of 68,340 in the two-legged second semifinals between ATK and Chennaiyin.

An analysis by Broadcast Audience Research Council (BARC) data shows that the league recorded a giant reach of over 130 million in the 2021 season, surpassing the previous season in terms of Television Ratings, Time Spent Viewing, brand integrations, and social buzz.

With the massive participation of a loyal audience, the ISL has been commercially successful, with a myriad of brands partnering with the event. In its 7th season, the opening game witnessed a massive TVR of 0.96, while the time spent per viewer (TSV) for the entire season shot to 28 mins (16% growth over season 6). Apart from that, the new season also saw a growth in the Google search index of 87% when compared to the previous season.

Social media engagement has also increased dramatically over the years. The ‘Fan Wall,’ which became a popular aspect of watching the Indian Premier League (IPL), was brought over to the ISL as well and is just one example of how engagement has increased.

All successful top leagues like the IPL, English Premier League (EPL) etc., in the world are privately owned. The EPL is a private company wholly owned by its 20 Member Clubs who make up the League at any one time — each club is independent, adhering to the rules of football defined by the league and foreign bodies. Despite Covid, the EPL drew 3.2 billion viewers worldwide and 500,000 tourists in 2019-20, contributing £7.6 billion to the UK economy.

The IPL is a private franchise-based tournament governed by the IPL governing council, which is affiliated with the Board of Control for Cricket in India (BCCI). According to the BCCI, the 2015 IPL season contributed INR 1150 crores to the Indian economy’s GDP, which is close to $150 million. Moreover, IPL’s brand value increased by 7% last year, reaching $4.7 billion in 2021 as of February 2022.

Apart from providing impetus to the economy, such leagues create a virtuous circle with increased investment into the development of players and infrastructure. The ISL, for example, has been a significant step toward the development of the sport in the country. Joy Gabriel, Head Performance Analyst at Hyderabad FC and Performance Analyst at AIFF, believes that ISL helps develop local domestic talent in India through efficient grassroots and youth development programs.

He stated that the ISL has been a great drive for more opportunities in terms of employment, with teams now understanding the importance of sports science and artificial intelligence in sport, “Every ISL club consists of a group of support staff, technical staff and coaching staff who collectively work together toward the success of a team.”

In an ISL match, a club can field a maximum of four overseas players at any time, and the Asian quota player need not be among the overseas players on the field. A coach can also opt to play less than four foreigners. However, the national team’s head coach Igor Stimac is not happy with more foreign players featuring in a match in ISL and  I-League. He argued that so many foreign recruits in Indian leagues could hold back the development of home-grown players.

On the recruitment of foreign players, Joy opines that Indian players don’t develop unless they rub shoulders on the pitch with overseas players and train under overseas coaches, “At the same time, positions such as strikers and Centre Backs would be sealed in most clubs for foreign players, thus forcing Indian Strikers to switch to wingers or other alternative secondary positions.”

Franklyn Roncon, Football Development Officer & Head of Operations at Goa Football Development Council, said that ISL will mandatorily have to be the Top Flight as it represents the current scenario, be it quality football, fanbase, the organizational structure of the club, their grassroots football initiative, which they have been able to do due to big Corporate lobbies joining in, “ISL clubs are already on the rise, and by making ISL second to the I-League will distort the foundation that was created.”

While on the other hand, the I-league was struggling before the ISL as the AIFF did not support the I-League wholeheartedly. It would take decades to create the frenzy and excitement that ISL created in the initial years. Roncon believes it is about finding the right balance, “Had AIFF included the I-league clubs in the ISL first season, such animosity would not have existed. Examples are the Big I-league clubs that have now entered ISL, who being part of the set-up, are happy that they belong to the top flight league.”

Regarding the state government’s support for the development of football, Roncon said as far as the Goa government is concerned, the support has been tremendous. The financial support received from the government is invested completely for grassroots Football (6 to 12yrs), “We have 40 Football development centres with over 3500 boys and 1500 girls playing football across the state. In addition, the government supports the only I-league club from Goa Churchill Bros with financial support. Stadiums are given at reasonable rates, and departments like Police, Health, municipality and Fire Brigade are also provided for matchdays.”

He asserted that the good way to go ahead with it is that one season gets all clubs in One Top Flight and has all 11 ISL teams and 12 I-League teams participating together. In this way, each club participates and knows where they stand and what they should be doing to survive, and there won’t be a hue and cry about which should be in the top flight because only the best can and should belong to the Top flight. The criteria should be the best teams in the top flight, whether you name it ISL or I league or something else.

On 16th August, FIFA suspended AIFF due to “undue influence from third parties” and the country has also been stripped of the right to host the 2022 Under-17 Women’s World Cup. “FIFA is assessing the next steps for the tournament and will refer the matter to the Bureau of the Council if and when necessary,” FIFA said in a statement.