As parties scramble their candidates lists ahead of the incoming state elections, sitting MLAs’ tension is on the rise. They have reasons to be nervous, as a near majority of them – across party affiliations – won’t be holding their seat once the elections are over.

The short duration of politicians’ career is a peculiar and perhaps unique feature of India’s electoral politics. Of the 4025 individuals elected over the last electoral cycle, 2035 were first-time MLAs (50.6%), 925 served for a second time (23%) and about a quarter of all MLAs got elected for the third time or more. 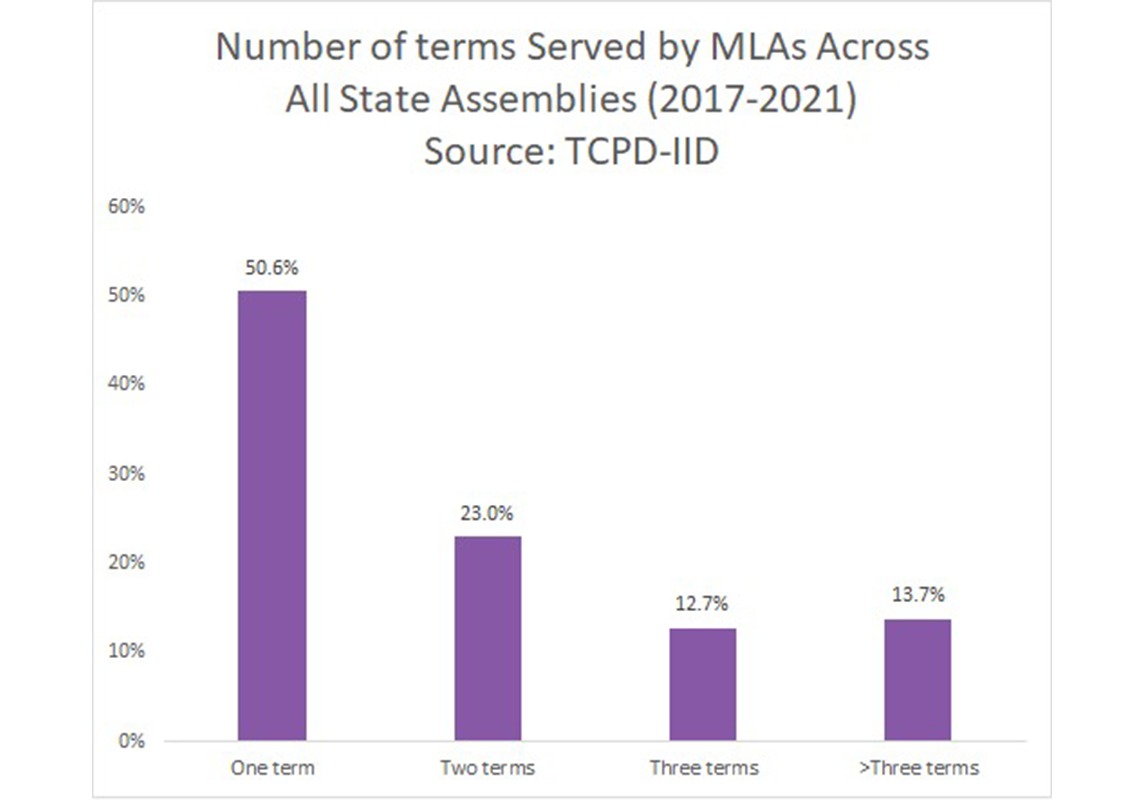 One of the reasons for the high number of first-time MLAs comes from the fact that many incumbent MLAs lose their bid to re-election, or don’t even re-run in the first place, as parties often discard their sitting MLAs to present fresh faces to voters. In the last electoral cycle, only 2700 out of 4025 incumbents ran for re-election. Only 1423 of them won (52%).

These are startling numbers as almost everywhere else in the world, it is assumed that incumbent candidates hold many advantages. They have name recognition, party support. They have easier access to funding through party machineries and they have had the chance to build a record which they can defend against newcomers. In the United States, the average individual incumbency in state legislatures is as high as 95%, with very little variations between states. 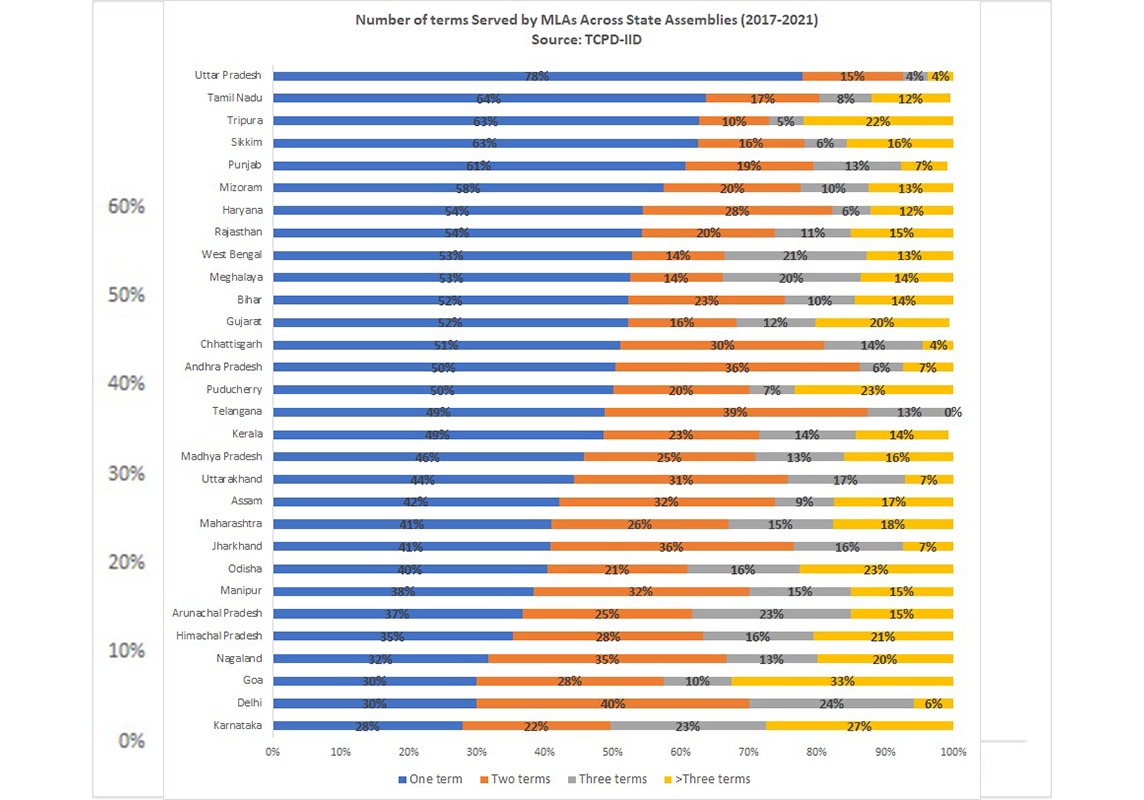 High turnover can be explained by waive elections. The BJP won 312 seats in 2017 with 257 first-time MLAs, 194 of whom had contested for the first time. Tamil Nadu is known for big swing elections and Tripura was also won decisively by the BJP. But that does not account for everything. Even in states dominated by a single party over time, such as West Bengal, Odisha or Gujarat, the ratio of first-time MLAs is still quite high, even within the winning party.

Why would political parties discard their incumbents? There are many possible reasons, including changing party alliances or changing caste arithmetic, money and the auctioning of tickets to the highest bidders. Parties in power also seek to avoid anti-incumbency by presenting new candidates. They sometimes need to also replace defectors.

Organizing the turnover of MLAs is also a means to concentrate power in the hand of a tiny elite within parties. When he was Chief Minister of Gujarat, Narendra Modi would regularly discard half of its sitting MLAs, officially on the basis of some performance evaluation. In reality, discarding 50% of sitting MLAs was an effective method to keep the other half disciplined, and to avoid the rise of potential future challengers, with a political base of their own. Discarding sitting MLAs is a way to regulate intra-party competition and to increase dependency of individual representatives towards party bosses.

Another reason for discarding sitting MLAs is the fact that they often perform quite poorly, as we saw earlier. Since 1991, the average strike rate (or success rate) of incumbent candidates in Uttar Pradesh is 43%. In Punjab, it is 39% over the same period, 54% in Goa and Uttarakhand, to only pick the main states going for elections in the Spring.

Even though party anti-incumbency in India has reduced over time (as pointed by Sanjay Kumar and Pranav Gupta), individual anti-incumbency remains very high. This points to the fact that it is extremely challenging for MLAs to meet the expectations and needs of their constituents. MLAs have limited resources to address unlimited needs and demands, which necessarily remain for the most part unfulfilled.

Since candidates tend to be evaluated on the basis of their ability to deliver direct services to voters, it is not surprising that many of them choose to turn against those they voted in power in the previous election. The high turnover of politicians in India is thus both a party-induced and a voter-induced phenomenon.

One could think that power changing hands regularly is a sign of democratic health. Even if parties select candidates, voters after all get to determine the fate of their representatives. There are however three main negative consequences, that have major implications on the behavior of elected representatives, on the functioning of legislatures and on the concentration of power in India.

The first negative effect is the fact that the prospect of early exist, combined with a high cost of entry into politics, act as a strong incentive to engage into various forms of predatory behavior. In simpler terms, short yet costly political careers encourage corruption.

Second, the rapid turnover of politicians in India means that assemblies lose a lot of talent and cumulative experience, particularly for legislative work. Short-term MLAs don’t really have incentives to learn the ropes of Parliament work, especially when they spend most of their time-solving people’s issues in their constituencies. As a result, elected assemblies hardly play their law-making role or their mandate to keep the Executive in check.

Finally, having so many fly-by-night politicians means that power gets concentrated into the hands of a small elite of professional politicians. I define a member of India’s stable political class every representative elected three times or more. These are the real professional politicians, who last, often beating party or individual anti-incumbency. Across India, again over the last electoral cycle, only 1065 MLAs meet that criterion, out of 4025. 26% may seem to be a significant number, but one realizes how concentrated political power really is when you divide that number by the number of states and within them by the number of major parties.

Is The Last Bastion Of Pluralism Also Under Threat ? Read why this Military Man is worried
Vidhi Writes: How RBI is Helping Towards Financial Inclusion