What Messi Showed Us In Qatar

That night before two mornings after. The noise from the Lusail; the boom of Buenos Aires chanting on Insta; snapshots of laughter, tears, fireworks, images, sounds loaded upon one another; unstoppable. For a neutral, it was the greatest football World Cup final in living memory – knife-in-gut twists and blind turns, heartbeats spiking, adrenalin firing, and blood pressure in constant flux. 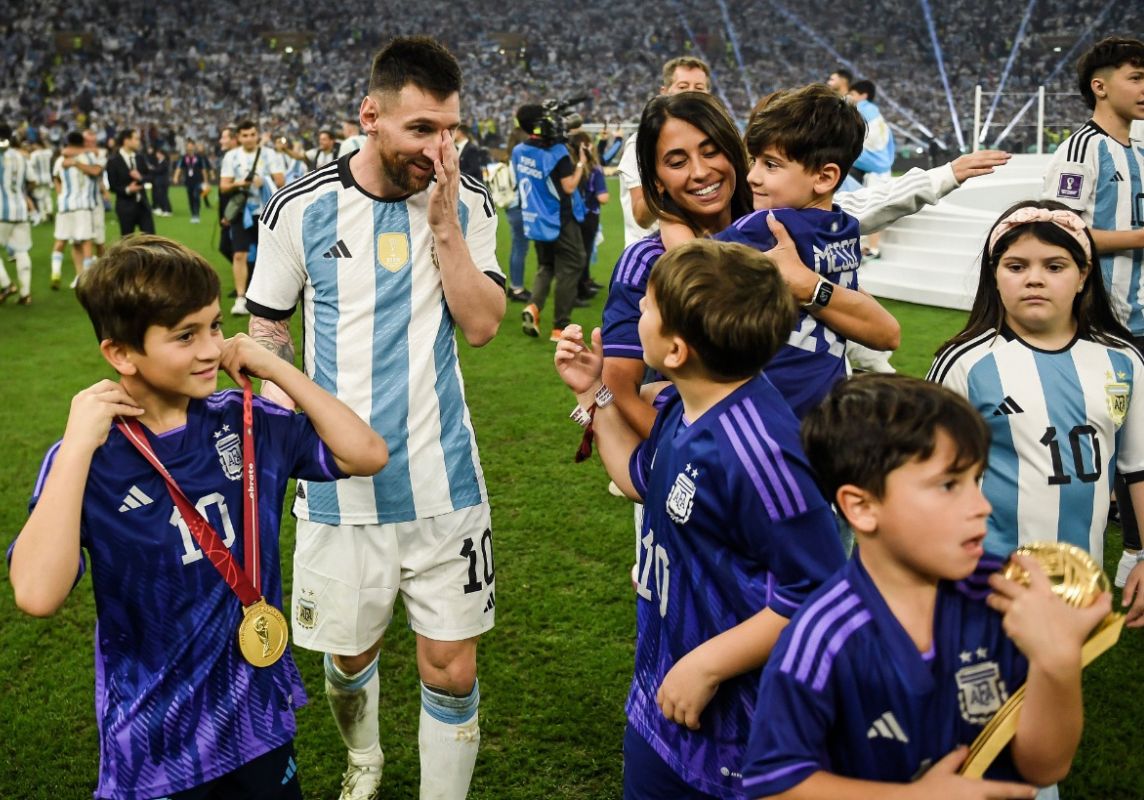 Yet even in the tumult of the spooky, almost preternatural finish of Qatar ‘22, something deeper and richer coursed through. Tied to in the life and times of Lionel Messi, his entanglement with Argentina’s painful World Cup campaigns of the past, and also with the man who had won them the Cup 36 years ago – Diego Maradona.

Argentinians referred to Qatar ‘22 as “the first World Cup without Diego.” As the team picked themselves up after a shock defeat to Saudi Arabia in their very first match, fans were convinced that their old footballing god was watching and guiding a new one towards his rightful place amongst an illustrious pantheon. The idea may seem fanciful to some, but Argentina’s gaze of the 2022 World Cup visualised the event differently.

Their fans had carried several banners with images of Maradona (who died in November, 2020), complete with a saintly halo to Qatar. Their World Cup song ‘Muchachos’ included the words “Guys, now we are excited again/ I want to win the third, I want to be world champion/ And Diego, in heaven we can see him…/ encouraging Lionel.” By the end of the final, in trying to translate Messi’s achievement in words, even the English commentator offered us a semi-hypnotic tumble – “perhaps his moment for infinity”; “as if pre-destined”; “his fulfilment, his completion”. It’s a wonder he didn’t finish with a “hallelujah”.

Messi is certainly not the oldest winner of a football World Cup, and he has promised that he is not retiring from international football just yet, as he wishes to experience playing in an Argentinian shirt as world champion. He may well for the national team till the 2024 Copa America, South America’s continental championship, where he led Argentina to victory in 2020 for the first time in 28 years, defeating Brazil in the final.

There are several parallels between Messi’s many World Cup travails, and those of India’s first gargantuan shorting hero, Sachin Tendulkar. Yes, these are different sports with different competitive contexts but these very decorated athletes ultimately yearned for the ultimate prize. As the years wore on, their fans felt, almost angrily, as if the sport owed the achievement to their superheroes – for their youth and long careers of sustained excellence. Tendulkar won the World Cup on his sixth and final try in 2011. Carried on his teammates’ shoulders after the final, his face streaked with tears, he said, “It is never too late. Winning the World Cup is the ultimate thing.”

Qatar was Messi’s fifth World Cup with each of the previous four tournaments revealing themselves to be purgatory. In 2010, after a 0-4 rout by Germany in the quarters, he had broken down, crying like a child, unchecked, audible, sitting on the floor of his dressing room. In 2014, after once again losing to Germany, but this time in the final, he was the disconsolate winner of the Player of the Tournament prize – the Golden Ball. In 2016, after losing the Copa final to Chile on penalties, Messi announced his retirement from international football, saying, “For me the national team is over.” But here he is now, six years later, telling us, “I knew God would bring this gift to me. I had the feeling that this (World Cup) was the one.” Just like cricket had rewarded Tendulkar, football, after wringing Messi out right from the depths of his soul, had paid its dues.

Messi had played the 2010 World Cup with Maradona as coach, and in Qatar had found it ‘strange, different’ to not have Argentina’s icon show up in the stands. From the outside, every comparison between Maradona (who died in November 2020) with Messi ends up arriving at the conclusion that the two men could never share table space. Maradona was the wild, mouthy one off the streets. Messi was from a sober, respectable middleclass, the prototype of the scientifically-trained 21st century footballer, who left his country at 13 to join La Masia, the Barcelona youth academy who made him a goal-scoring machine.

In the middle of these various story arcs come the football World Cups. They interrupt and disrupt the gruelling cycle of club football, raise different challenges for its giants, and place seasonal stars in the hottest seat. Simultaneously, they can also elevate football players. Not into ‘immortality’, which is but an arrogant cliché, but most certainly into avatars of unquestioned, unchangeable, tamper-proof worship across the entire planet.

Messi is already one of the world’s most loved and recognised athletes, a cult footballing figure with over 397m Insta followers. He represents the schools of athletic ‘artistry’ and ‘beauty’, sleight of body and speed of mind, like the recently-retired Roger Federer, but minus the ease of global village sociability or indeed, its lingua franca English. As world cup winner Messi today represents the pure power of performance. With contemporary football harnessing explosive power out of data-driven play patterns, what Messi did in Qatar through his slight 5ft 7in, 73-kg frame was to show us multitudes. In combinations, possibilities and imaginations.

Twenty years from now, what will be remembered of Messi? Goals, assists and dribbles for FC Barcelona and PSG by their fans, surely, but for the rest of us on earth? Not so much the photos of him with trophy, but that exquisite passage of play in the semi-final versus Croatia, where he turned Josko Gvardiol, one of the world cup’s standout defenders – 15 years younger, six inches taller and seven kgs heavier – into a heavy-footed, arm-flapping, panicky pretender.

Before the final, Jorge Valdano, world cup winner, philosopher and the best quote-giver of the sport (bless him, God) told Spanish online sports newspaper Dario AS, “There is a kind of literary contest to see who can best describe Messi as the star figure of the tournament,” which he goes on to say was very difficult, “because he has decided to synthesise football.”

To bring the somewhat otherworldly into it, again, it is only appropriate to analyse Messi’s contribution in this World Cup as he is as of now. Even when not in his prime, towards the end of his days but displaying, synthesising his own interpretation of football for the world to see. Against the modern combination of high speed and explosive strength, Messi gave us a walking snapshot of his game’s fundamental skills.

With the energy of his younger teammates around him, Messi became many things to many people. As Argentina climbed higher, the air got thinner, his game appeared sure-footed, generating the correct pace, space and time to create and destroy in the same moment. He was ghost in the machine to the opposition. every movement loaded with the possibility of going rogue. In random snatches, either deceptively minimal or sharp, furious bursts of movement, cutting through the lines and composure and defences. In the storm of competition, he became a lighthouse, sending out clear messages to his teammates with every assist or pass, but confusing the other side – with a feint, a dodge, a dink, a step here or there. If ever an amateur spectator needs a visual understanding of the importance of what ‘off the ball’ movement means in the game, Messi’s version of it turned Qatar ‘22 into a masterclass.

Having said his bit about Messi, Valdano then invoked Maradona and said, “Ten seconds are enough for him (Maradona) to tell us what this game is all about.” Messi has lavishly given us a month in Qatar. He has shown us that as footballers, Diego and Leo have always walked together. That they are in fact, kindred.

Salman Rushdie’s Attack in Context: Words, Writers & Weapons
Blasphemy & Sedition Laws: Why These Are Affecting The Actualisation Of Free Speech