Mithali Raj announced her retirement a few hours before the names of the players selected to tour Sri Lanka were released. Jhulan Goswami was not on the team, sans any statements about the decision either. This is being sent off at 3:15 pm on June 9, and the BCCI website has no news about Mithali’s retirement either. That’s more than 25 hours since her Twitter post. 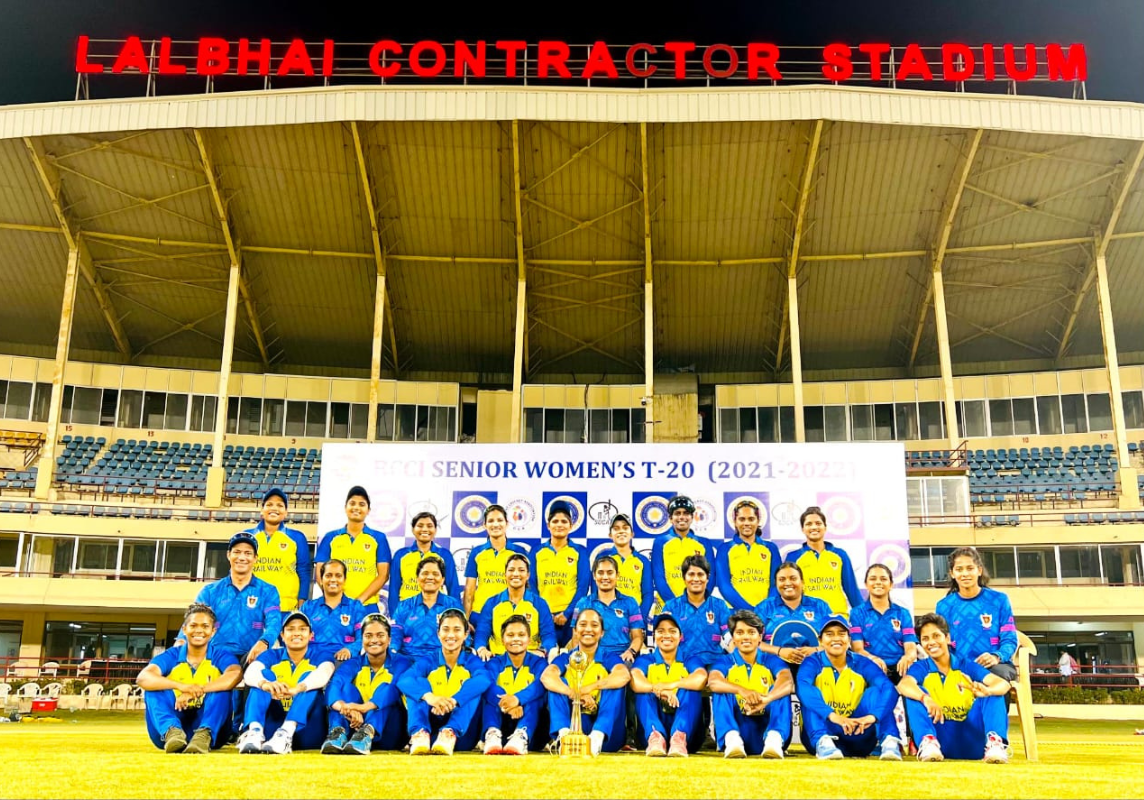 Its search result for ‘Mithali Raj’ takes us to a screen where the last news is as of Sept 29, 2021, with the headline, “The pink ball Test is a significant event for us: Mithali Raj.” BCCI secretary Jay Shah’s tweet response was swift and there may be a sudden spurt in tributes in a few hours or so on www.bcci.tv but 25 hours? Oh, well.

The first time I met Mithali was as late as in the 20th year of her career, but with many thanks owed here to Barkha Dutt. The previous sentence reveals my own omissions and commissions as a sports journalist as well as the contradictions swirling around Indian cricket, its women players and its media. I had interviewed Jhulan Goswami once in a three-star hotel lobby in Andheri, but the story never got published. In 2018, before this lapse around Mithali reached proportions of mortifying embarrassment, Barkha invited me to interview her on the WeTheWomen stage in Bangalore.

That October, I met the cricketer who had been the keeper of the flame of Indian women’s cricket during its toughest period – the decade between 2005 and 2015. Our conversation at WeTheWomen was not so much about Mithali’s cricket as it was about the Mithali behind the numbers. To trace where those formidable numbers came from.

Now that she has called an end to the longest international career in the game, almost 23 years, after scoring more ODI runs than anyone in women’s cricket (among 10868 runs for India), taking more catches and being the fastest to 2000 T20 runs, those numbers are everywhere. In the third of her mere 12 Tests, Mithali scored 214, the highest score by a woman Test cricketer. Twenty years later, with women’s Tests steadily being put on the backburner (England and Australia playing 42 of the 68 Tests held from the turn of the millennium), her innings is still No. 2 on the all-time list after 242 by Pakistan’s Kiran Baluch in 2004. 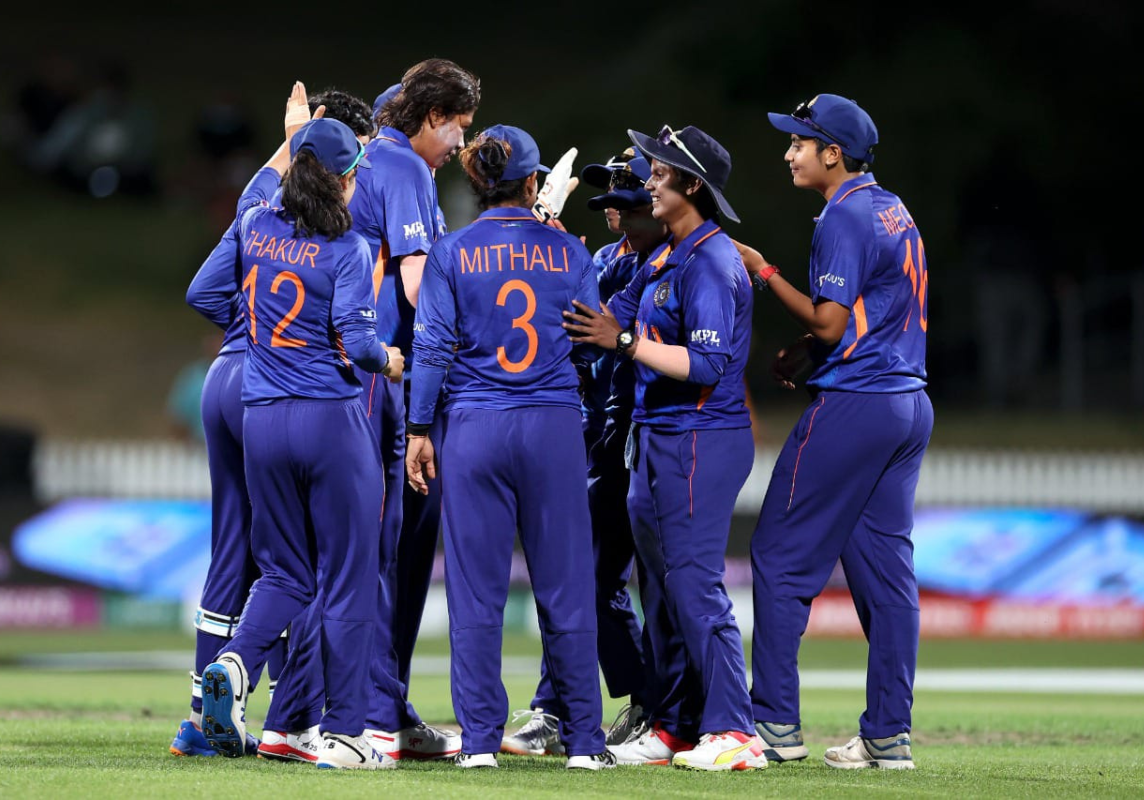 Mithali’s career may have wound to a close surrounded by a new generation of younger, faster and stronger women, with comparisons and complaints about strike rates or fielding speed. But her career needed to be appreciated in its entire context, not merely the last handful of seasons, because she has been cricket’s ultra-runner, straddling generations. It is easy to forget that the central chunk of Mithali’s career  was spent in finding purpose and seeking excellence in an environment of indifference. Her cricket is not just the sum of her numbers but a reflection of an deep and driven internal pride in performance.

Of the many things she said on stage that afternoon in Bangalore, a few stayed in the mind. That she had always been a doer, not having watched much cricket growing up – she had been too busy playing it. There was no time between training, studies and dance practice to watch cricket on TV. It was why she said had no cricketing idols, because cricket didn’t give her the time to be a spectator. Her role model was her Bharatnatyam dance teacher Ananda Shankar Jayant. Jayant and her two sisters were raised by a single mother and along with being a dance teacher and later, opening an academy, Jayanth was also a career bureaucrat. “As a cricketer I never looked up to anyone else but as a young girl, I wanted to be like her” – to be, Mithali said, “independent, strong.”

Cricket was always both professional university and boot camp. As a 16-year-old, she grew up with the game, a teenager among adults in the dressing room, staying quiet, learning how to fold her own clothes on tour, how to use cutlery when overseas. On the field though, she was an outlier – her batting sparkled, sumptuous classical shotmaking, timing from the game’s generous gods (or goddesses).

Captain at 22, Mithali, along with Jhulan was the leader of a generation who had pushed though the toughest years of their game, following women’s cricket merger with the BCCI due to ICC rule changes. After her ODI debut in 1999, in the five years between 2002 and 2006, Mithali played in 80 ODIs. In the next ten years, (2007-2016) she played 81, with single figure women’s ODIs in eight of those. While BCCI’s coffers were overflowing with freshly-minted IPL moolah. The sponsors wouldn’t supply the women with their jersies, often the men’s team jerseys passed on as hand-me-downs to the women. Their first central contracts in October 2015 came eleven years after the men. 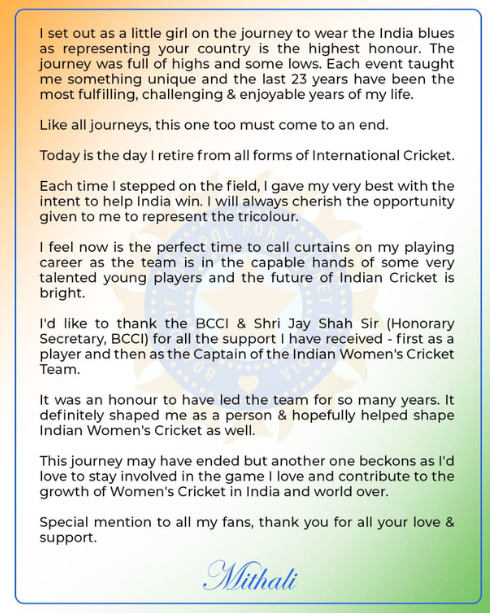 But whatever else was missing from Indian women’s cricket, Mithali’s performances keep pushing it into public notice. Even as the Australian and English game professionalised, India somehow stayed competitive – because Mithali, with the bat, remained its centrifugal force. No matter what was being blunted, her resolute obsession of her craft stayed sharp, “When you are a fierce competitor, you just want to be the best.” It was during that time she said she played alongside teammates of her age and also made her longest-lasting friendships in the team “during my early playing days, friends who I still have in my life.”

But cricket, she reminded us in Bangalore, without any hesitation, had to be seen as a serious professional business, “There are times when you are fighting with your own demons, your competitions outside, you are trying to keep up to the current standards of the team… I personally feel I don’t have time for friendships.”Those unfiltered words, in itself, are rare in Indian cricket, came from a woman who owned everything her childhood role model had demonstrated – independence, ambition and an iron will. To endure injuries and push through towards the light that seemed to flash in the distance.

Mithali had played more than ten years before the first women’s World Cup matches were televised live, in small segments. It was 16 years before the world’s wealthiest cricket board acknowledged that women’s team should at the very least be taken into account on the same platform as the men’s. It was only in the 18th year of her career that women’s cricket exploded into the public consciousness as India surprised favourites and toppled predictions entering the 2017 Women’s World Cup final.

Mithali had endured and waited longer than most, but the game eventually paid her its dues. She has ended her career celebrated and feted, her mark on the Indian women’s game Bradmanesque – this is less about the runs / averages stuff, but more because she has left it better, of a high standard, than she found it. A long, long distance away from when she had to listen to relatives grumbling about a girl seeking a career in cricket. In Bangalore, she remembered that with amusement, “Times change – everyone gets a chance under lights.” It took its time but when her chance came, Mithali Raj made those lights shine.