What Lies Beneath: Decoding Polarity In The Portraits Of Nudity

Even with the social conditioning of seeing the female nude, even with centuries of equating the relevance of a woman to that of her looks, even with the norm that it is, people are still crazed by seeing a woman baring herself. This doesn’t even account for the pressure and discomfort felt by the average woman who sees the lithe, slender, uninhibited woman, carefree in her body. 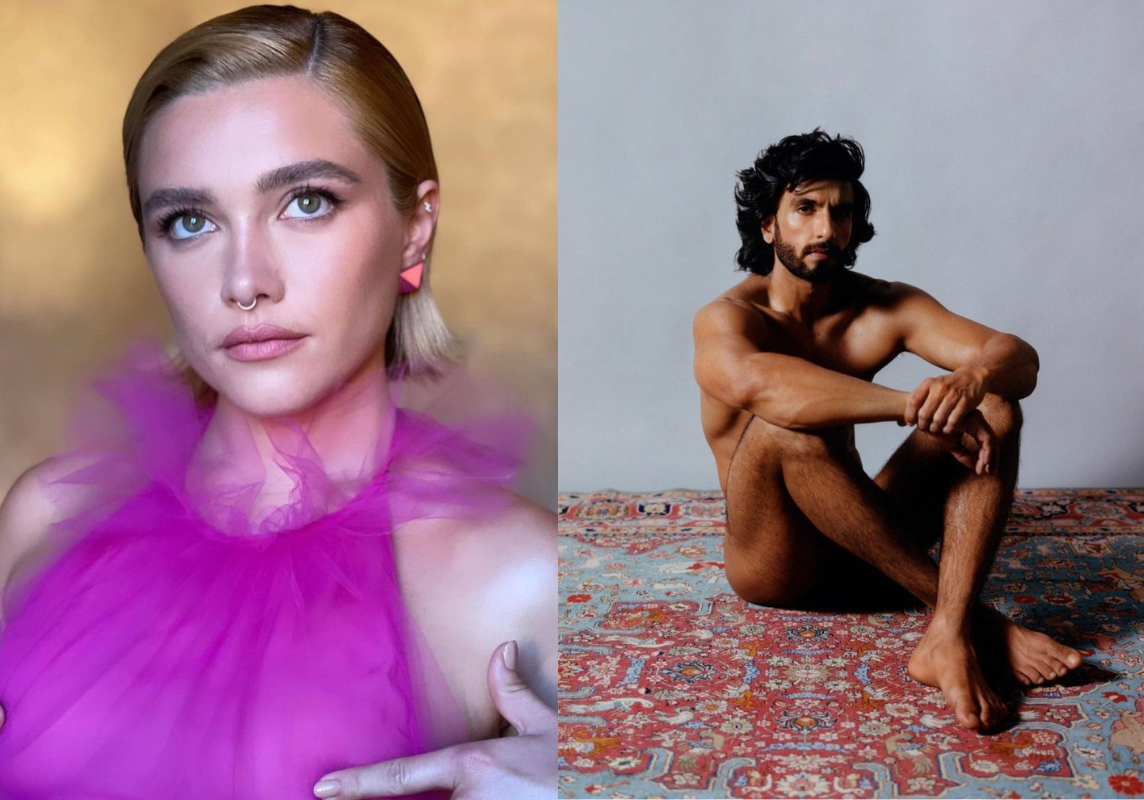 What’s been interesting to watch and witness is just how easy it is for men to totally destroy a woman’s body, publicly, proudly, for everyone to see. You even do it with your job titles and work emails in your bio..?

This eerily familiar statement was recently made by a female actor, and is one that has brought back the discussion on women, their bodily agency, their choices, and the unsolicited wringer of optics that they are put through. This statement is familiar because, as women, it is something we all wonder. Whether or not we take a podium and talk about it, it remains eminently visible when we walk on the roads, when we put up a picture on social media, when we are on a first date, and in some cases, when we look in a mirror. We internalise the idea that our bodies first belong to those who look at them, and only then belong to ourselves.

Florence Pugh, a celebrated young actor who made this statement, found herself at the receiving end of a heavy amount of public criticism merely because she wore a sheer Valentino gown. There seems to be a need to discuss the polarity of nudity, or nudity-adjacent clothing.

Not many people who I have spoken to know the intricacies of the Pugh event, but almost all of them knew, and have strong opinions on, the recent Paper Magazine shoot that male actor Ranveer Singh was a part of. In a world of overly-sexualised women and the male gaze, an international magazine published nude portraits of a very mainstream and popular actor. The burning social-media zeitgeist was shook at this curated paradigm shift.

Now, in a hypothetical world bereft of gender binaries, reactions to nudity will be looked at with the same awe, repugnance, shock, confusion. Some of us will agree this isn’t an ideal world. Some of us still recoil at advertisements and magazine spreads where women are doused in the heightened male gaze. Perhaps part of the reason for this is because the custodians of pop culture have dominantly been men for a long time – the producers, the directors, the photographers, the writers. They knew the female form as one to elicit and arouse, and thus, that was what we, as consumers or viewers, saw. Couple that with the power of suggestion, and we find that if a lie is constantly and confidently repeated over and over again, soon everyone begins to believe it as representing the truth.

The male nude is a picture of vulnerability, where he “sheds” his inhibitions, where he is his innate self, away from the veneer of the protector he is always supposed to be. If we watch movies with extreme male nudity, like the Michael Fassbender movie Shame, the conceptualisation of his nudity is to reflect his abrasive loneliness. It is not to titillate the female viewer. And if, by the grace of divinity, the objective is indeed of titillation, then it is forever reflected in the sheepish man strategically holding a pillow or a plate or some such mundane object to ensure nothing more than a sneak peek, and that is that. Literature and movies have used the “man in uniform” trope to excite female readers/viewers far more than the male nude. The GQ man is always in a three-piece suit.

Perhaps the only equalizer is an FIR filed by Mumbai police against Singh for “hurting sentiments of women”.

So, back to the point at hand, Ranveer Singh’s nudity is seemingly to disrupt first, and arouse second. A leading male actor from India does a Burt Reynolds and stuns his audience. A female nude would quite simply not be disruptive. It is the norm. It is what we are conditioned to. It is what we are tuned to look at. On a good day, the female nude is juxtaposed with historical artefacts. On a bad day, she is slut-shamed.

Someone on the internet made a fascinating meme on the reactions of how women perceived Singh in this shoot, and contrasted it to how men reacted to a post of actor Esha Gupta in lingerie. Even with the social conditioning of seeing the female nude, even with centuries of equating the relevance of a woman to that of her looks, even with the norm that it is, people are still crazed by seeing a woman baring herself. This doesn’t even account for the pressure and discomfort felt by the average woman who sees the lithe, slender, uninhibited woman, carefree in her body.

The Lily, of Washington Post, analysed this entire phenomenon in an article, where they write that “Female nudity on-screen is commonplace, at times even banal. A 2018 analysis of 1,100 popular films found that 25.4 percent of women had roles with some nudity, versus 9.6 percent of men.”

This gendered debate then moves stealthily into a discourse about self-love, body positivity, and complexes. We live in a terrible reality where women are in constant competition with each other because of a phenomenon that was primarily self-serving for men. I won’t deny that there is the element of agency, and that thousands and lakhs of women “want” to look “good”, and thus, believe in having the “best body” that in turn makes them attractive. Eminently, there are also women who have steadfastly believed in becoming the poster-girls of body positivity, who celebrate curves, and women who eat and enjoy what they eat.

Essentially, we are living in a world where we are objectified and sexualised by men if we fit in the misogynistic box of “how a woman should look” or we are slut-shamed in equal measure by men and women alike or we are anti-feminists because we ourselves fell into the pit of hyper-sexualizing our bodies. To top it all off, if we don’t look like someone that fits the checklist of these three scenarios, we are meant to feel bad about ourselves because we aren’t “attractive” or “hot” enough. It is extremely tiresome to live with the realities of these thoughts.

To round this rambling on the “rambunctiousness” of Ranveer and the “raunchiness” of Florence, I want to end with a literary segue. After devouring only female-written books for the best part of the past three years, I have realised the objectification trope for men. Its his “crooked mouth”, and “deep eyes”. That’s all folks. The men need to have a crooked mouth and deep eyes, whereas women need to have wavy strawberry hair, amber eyes, slender arms, supple breasts, a lean figure, a unique gait, and bubbling laughter. Sounds fair