While the fear that mirs and marks an author’s life seems confined to autocratic and illiberal countries, the recent attack on Salman Rushdie, the man who gave us ‘Midnight’s Children’, has raised questions on the sanctity of freedom of expression. 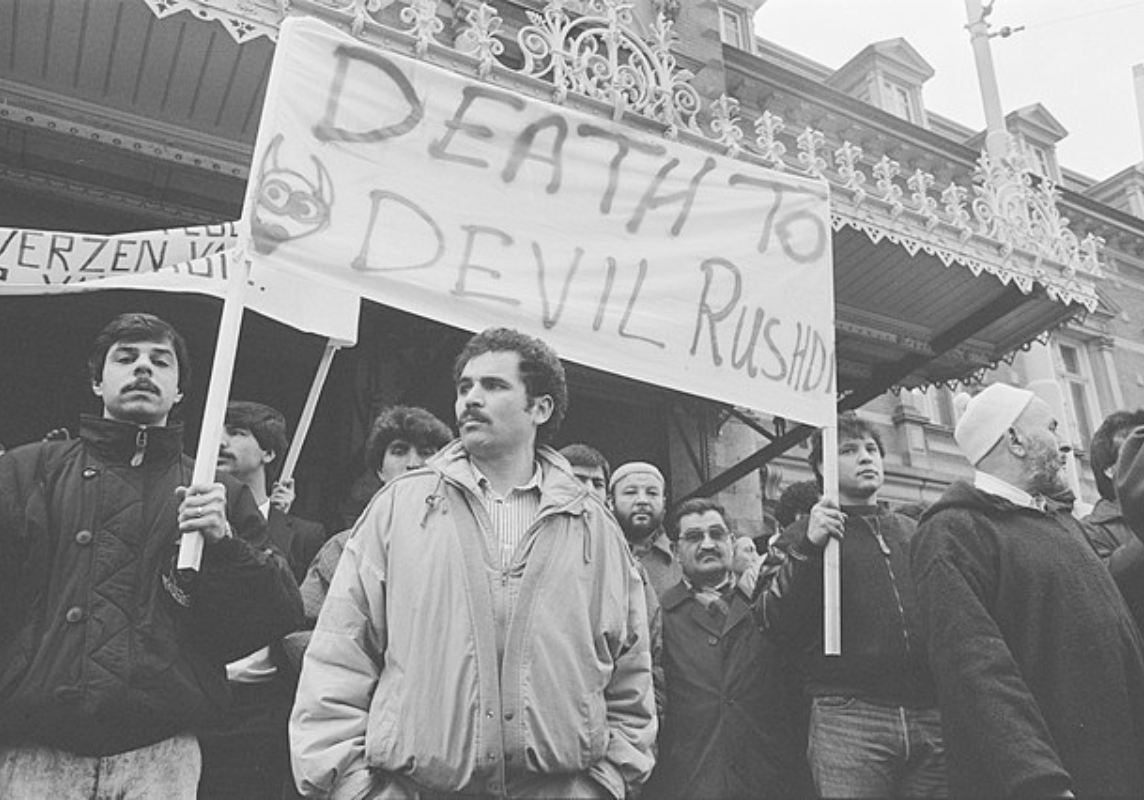 In The Hague, about 5000 Muslims demonstrate against Salman Rushdie's 'The Satanic Verses'

Literature, in the forms of poetry, books and pamphlets, has played a crucial role in shaping the world, either through drawing inspiration, exporting ideals, or even cultivating and inciting revolution. While the flow of ideas today is transmitted through video or podcasts, it was the written word that was the medium of choice for freedom fighters and revolutionaries that wanted to bring about change. Whether it be Dadabhai Naoroji, through the book ‘Poverty and Un-British Rule in India’ – finally drawing attention to the British Empire’s wealth drain in India, or Thomas Paine’s ‘Common Sense’ Pamphlet fuelling pre-independent America by reconciling revolutionary arguments with Protestant ethics – literature has often been the spark that lights fire that paves the direction of a movement, a country or even civilization.

Thus, writing has often represented a threat against myriad forms of authority – political, religious and cultural. Due to the threat these writers may pose, harsh measures are adopted to curtail their freedom of speech. This can include several years of incarceration, like with Nurmuhemmet Yasin. Yasin, a Uighur writer and poet, was sentenced to 10 years in prison in China for publishing the short-story ‘Wild Pigeon’ that allegedly incited separatism. His current status is unknown, with reports he had passed away in Shaya prison in 2011 due to poor treatment. Some cases are even more dire, like the assassination of Anna Politkovskaya, a critic of the Putin administration and the second Chechen War. After surviving nine attempts on her life, she was found dead in an elevator in 2006, quite ominously on Putin’s birthday.

While this fear that mirs and marks an author’s life seems confined to autocratic and illiberal countries, the recent attack on Salman Rushdie, the man who gave us ‘Midnight’s Children’, has raised questions on the sanctity of freedom of expression. The Indian-British writer was stabbed multiple times by a man just before delivering a lecture at the Chautauqua Institution in western New York, a place he regarded as a safe haven for exiled writers.

The attack is linked to a controversy that had followed the author since 1988 when The Satanic Verses were published.  The 547-page volume was banned in 13 countries, including India, Sudan, and Pakistan, as it fictionalized parts of the life of Muhammad making blasphemous references against the prophet, Islam and the Quran, among other objections. Rushdie was forced to go into protective hiding for over a decade when outrage over his novel reached a fevered pitch all around the world. 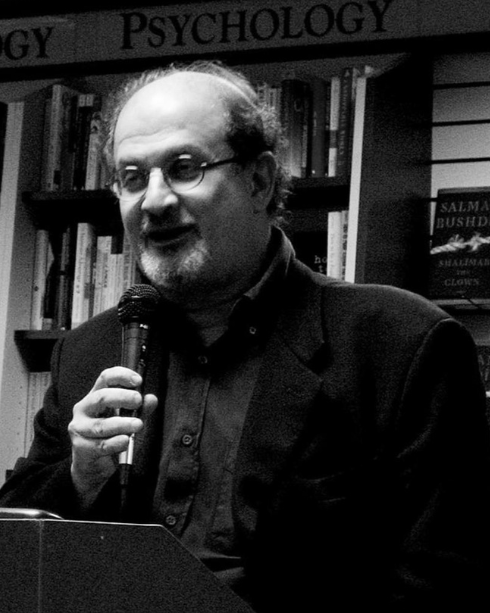 The publication of the book had also seen lethal riots play out in Mumbai, which led to the deaths of 12 people in 1989. Additionally, five people died in Islamabad, Pakistan, under similar circumstances. Moreover, the then-Supreme Leader of Iran, Ayatollah Khomeini, went so far as to issue a fatwa against Rushdie, calling for his murder.

The fatwa was maintained by Iran’s government after the death of Ayatollah Khomeini for 10 years until 1998, when Iranian President Mohammad Khatami, who was considered relatively liberal, said that Iran no longer supported the killing. Rushdie then began to make public appearances again, attending book events and parties, enabling him to travel more or less freely. But the fatwa remains in place, with a bounty of $3.3 million attached from a semi-official Iranian religious foundation.

The fatwa threatened not only Rushdie but also those associated with The Satanic Verses. Many people, including its Japanese translator, who was killed in 1991, were also attacked. The translator, Hitoshi Igarashi, was stabbed to death at age 44 that July at Tsukuba University, northeast of Tokyo, where he had been teaching comparative Islamic culture for five years. Mr Igarashi had received death threats from Islamist militants — No arrests were ever made, and the crime remains unsolved. The publishing house, Shinsensha, had also faced protests at its Tokyo office in 1990.

Several others have had attempts on their lives, including Ettore Capriolo, the Italian translator of The Satanic Verses, who was stabbed in his apartment in Milan days before the attack on Mr Igarashi.  William Nygaard, the book’s Norwegian publisher, was shot three times outside his home in Oslo and was critically injured.

The Rushdie attack has gained widespread attention and has been condemned by top officials around the globe. Outgoing British Prime Minister Boris Johnson and newly re-elected French President Emmanuel Macron expressed solidarity with Salman Rushdie, with the latter saying, “Salman Rushdie had embodied freedom and the fight against obscurantism for 33 years. His fight is ours, universal.”

Additionally, there has been vociferous support from the writing community who have spoken out to condemn this attack, including Stephen King and J.K. Rowling, at a time when authors have come seemingly more under fire. Following her public support for Salman Khurshid, J.K. Rowling has been issued a public death threat by extremists based out of Iran. Police Scotland has already begun probing into the credibility of these threats.

The freedom granted to writers and artists for expression is often considered a key indicator of the health of a democracy. This is because the actions of the State toward artists and their expressions are often a lesson in tolerance and permissibility to the masses. To quantify this sentiment, PEN International – a worldwide association of writers founded in London in 1921 to promote freedom of expression –  published a Freedom to Write Index. Started in 2020, this Index provides a count of the writers, academics, and public intellectuals who were held in prison or detention during 2021 in relation to their writing or for otherwise exercising their freedom of expression. While India has improved marginally as the number of writers behind bars in India declined since 2020, it is ranked 9 in the list of Top 10 countries of concern – tying with Eritrea and beating out Vietnam.

The banning of The Satanic Verses in India was considered a watershed moment in India’s treatment of writers. For India’s former attorney general Soli Sorajee, the ban of the book set a ‘pernicious precedent’. While banning books had not been uncommon, the enforcement of the ban through Section 11 of the Customs Act, 1962, was unprecedented and prevented the legal challenge of the order.

Malvika Maheshwari, a professor at Ashoka University and expert on the interrelations between art and politics, addresses this moment as a transformational moment where the state moved from being a principal supporter of individual freedoms to its principal adversary.

Free Word – “Without the freedom to offend, it ceases to exist.”

While Article 19 of the Indian Constitution upholds the Freedom of Expression – its exercise is not as absolute in other parts of the world. Due to the multicultural conservative nature of India’s polity and the instability at the time of partition – the freedom of expression has been tempered to account for the sovereignty and integrity of the country along with public order, decency or morality, defamation and incitement of offences.

According to the present Additional Solicitor General, Madhavi Goradia Divan and an expert on Hate Speech notes in her book Facets of Media Law that the freedom of expression is often curtailed by vote bank politics. Thus, the act of banning the book becomes more important than maintaining the ban. This can be seen as the courts have been less eager to uphold book bans recently than they have been in the past. The courts have overturned the ban of books like Shivaji: Hindu King in Islamic India and Jinnah: India, Partition, Independence in Maharashtra and Gujarat, respectively. In the former case, the Apex Court raised the burden of proof for showing a publication can cause enmity between different communities.

While India’s judiciary may have progressed following the ban on The Satanic Verses, there is still a way to go. While the leading emblem of free expression is recovering from his attack, the right to express oneself is not — there are other writers, journalists, and comedians who have been attacked or imprisoned for expressing their opinions, including Narendra Dabholkar, Sudha Bhardwaj, Munawar Faruqui and Gauri Lankesh, among others.

The threat to Rushdie and other writers stems from an increasingly global culture of insularity. While facets of the state machinery may have grown more tolerant and liberal, the latest attack and subsequent threatsare evidence of the need for the further social entrenchment of such openness. Whether one agrees or not with the ideas of the aforementioned writers, it is hard to deny that attacks against them quell the pursuit of freedom through the use of literature as a weapon to revolt against persecution and repression.

Roger That: The BCCI’s Parliament Of Parrots
What Messi Showed Us In Qatar