Inside Sudarshan: The Channel That Passes Bigotry As News

Shivangi Thakur, a reporter referred to as ‘sherni,’ by Sudarshan News, a channel that purports to work for the national interest, recently got into a war of words with an employee at a Haldiram’s Store when she saw the description of a ‘Navratri Special’ product written in Urdu. According to the channel and the reporter, the ‘Urdu’ text on the product meant for people belonging to the Hindu faith was “betraying Hindus” who fast during Navratri. 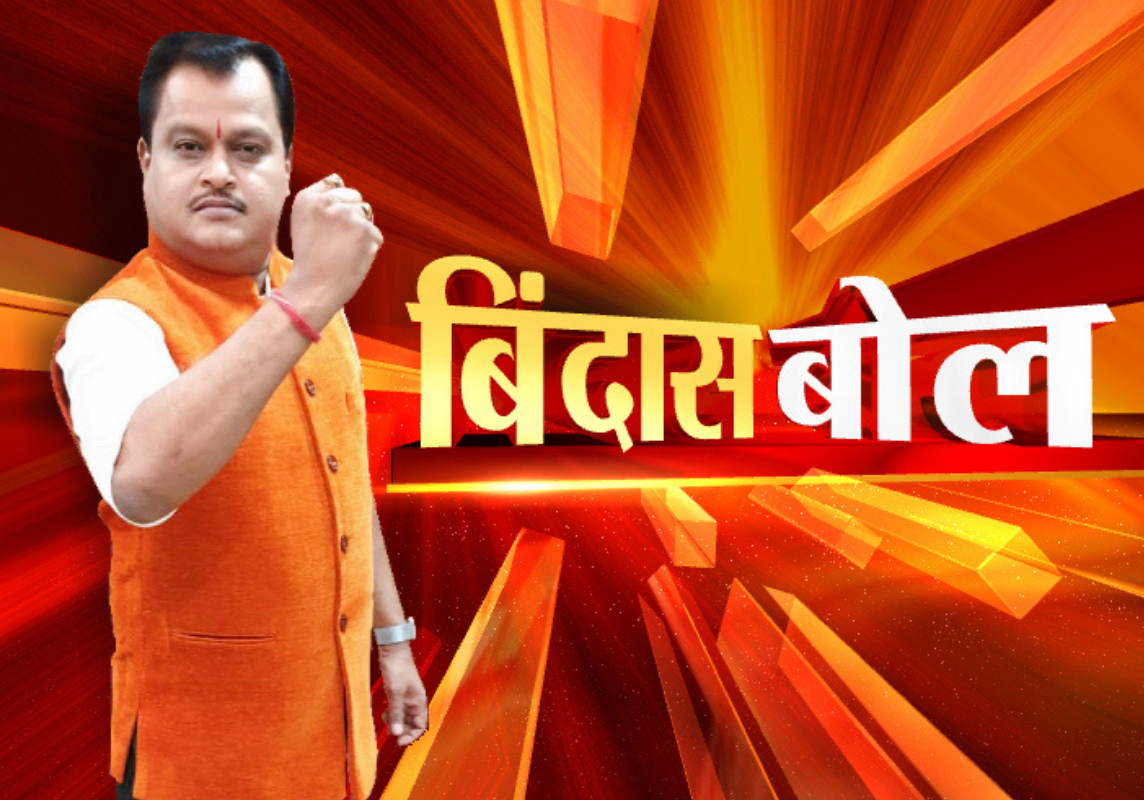 In a rather twisted turn, the text content on the packaging was revealed to be written in Arabic, which is a common fixture on products intended for export to the Middle East. Sudarshan News’ Arabic sentence of “betraying Hindus” translates to “the product contains a mixture of groundnuts and potatoes.”

Following the Haldiram episode, the channel aired another bizarre story, “Naukri Jihad.” The same ‘sherni‘ was stationed at the Pawan Hans office, where she reported that the Pawan Hans Airlines, which provides rides for Hindu pilgrims to Mata Vaishno Devi, hires only those from the Islamic faith. According to the right-wing channel, this was a cause for “security concern.”

By the way, it is nothing surprising as per the Sudarshan standards. Sudarshan thrives on anti-Muslim dog whistling. However, it is also unfair to ‘selectively target’ the right-wing channel when insanity passes off as news on almost every mainstream news channel, as pointed out by former staff of Sudarshan News.

Ranjana Sharma, a former news anchor with Sudarshan News, defended the channel’s reporting, saying, “The channel has a massive network of stringers. Whatever the channel reports that you say is fake or misinformed comes from the ground. There are people who make these accusations, the channel doesn’t manipulate videos or edit anything to create Hindu-Muslim debate.”

Sharma cohesively details to Mojo Story what parameters Sudarshan News follows to verify content coming from its stringers or give insight into its editorial process, “Well, if there is a woman (Hindu) crying and accusing a man (Muslim) that he has tortured her and forced her to convert, what verification is then required. The channel doesn’t fabricate anything like other channels. We run stories based on the inputs from the ground.”

She added that the channel did not receive any complaints on Hindus being accused of conversion or Hindu man forcibly marrying a Muslim woman.

The right-wing channel is notorious for running content considered incendiary and with the potential to disrupt communal harmony, “I am sure some other channels would also be receiving such news but I don’t know why they don’t run these stories. We received it and we used to carry stories,” Ranjana pointed out.

Ranjana shares that Sudarshan chief Suresh Chavhanke is a different person when on television and when in person, “He might be doing Hindu-Muslim on television but as an employer, as a person, he is decent and caring. He is concerned about what’s being telecasted on the television.”

Ranjana is not alone in this observation, other former employees like Mukesh Kumar, whose name has been changed for his security, notes a similar trend, “Believe me, he (Chavhanke) is not a bigot, like the way he behaves on television. He has an agenda to pursue and I believe he would someday reach Rajya Sabha or may even contest elections but as an editor, his equation with employees is far better than so-called ‘liberal’ organizations.”

“I joined as an intern and then became a full-time employee. At times, the channel head would ask me to fit the Hindu-Muslim angle, I would somehow ignore and get the story going without any ‘masala’, the little resistances I started,” Mukesh added.

Two more employees, one former and one current, also testified to Chavhanke’s different personas, and the challenges they face when looking to switch jobs. The former women employee at Sudarshan said, “I went for an interview at Zee News. The HR saw Sudarshan in my CV and asked, ‘Hum wahan ki trah kaam nahi karte. Aap kar lengi yahan adjust?’ (We don’t work like Sudarshan. Would you be able to adjust here?).

The former employees also say that in a new organization, they feel ostracized and their colleagues feel they would have the same thought process and attitudes that the channel broadcasts, “It is mentally frustrating that you are judged for a career choice you made. As employees, we are not ought to believe in all what the channel believes in. It is not only the case for the people who have worked with Sudarshan but for any news organization. I have Muslim friends, we eat together, talk with each other, there’s no problem at all,” said an ex-employee at Sudarshan.

Another former employee, when asked about the editorial position of the channel, said, “India has to be made a ‘Hindu Rashtra’ and each news related to Hindus must be prioritised and if to fulfill that narrative anti-Muslim dog whistling is required, the channel won’t hesitate doing that. If you look at the ratings, Sudarshan ranks very low on the TRP chart. Suresh Chavanke has always believed TRPs are bought and that has been proven recently. So, whatever the channel does, it does it because it believes in the story.”

“It’s not that we (the channel) only carry Hindu-Muslim stories. We also carry stories on inflation, environment, power cuts, and different stories that concern the masses,” said a current employee, urging people to look at their overall content and not form opinions by watching only a select few shows.

In defense of the channel, employees also said that channel has Muslim staff as well and that they have been a part of the organisation longer than employees of other beliefs.

Though Chavanke’s former employees try showing a better version of him, a 36-year-old woman employee of the news channel has accused the editor-in-chief of sexually assaulting and intimidating her for over five years. The police booked Chavhanke under various sections of the Indian Penal Code (IPC) including charges of rape, attempted unnatural sex, attempt to murder, forced miscarriage, criminal intimidation, cheating and outraging the modesty of a woman.

And, then in 2016, Yati Narsinghanand Saraswati, a rabid Hindutva rabble-rouser booked in several cases of hate speech and inciting communal tensions, came into defense of Chavhanake, saying that the charges of rape on Chavanke were a conspiracy hatched by “international jihadists.”

The channel, accused of broadcasting news which is vengeful towards a particular community and even calls for their genocide, still enjoys enough funding to run on national television.

Who funds the hate?

Sudarshan News content has landed the channel in numerous controversies. A number of cases, as many as 1823 cases have been registered against their editor-in-chief and the channel across the country. The channel has experienced significant backlash for its anti-Muslim, hate-filled and exclusionary shows, and even facing FIRs from the BJP members, whom they are supposedly close.

In July 2019, Sanjay Singh filed an FIR (under Section 153A of the Indian Penal Code (promoting enmity between different groups on grounds of religion, race, place of birth, residence, language, etc) against the then Sudarshan bureau chief Yogesh Mishra accusing them of turning a local land dispute into a Hindu-Muslim conflict.

Even the Supreme Court took strong objection to the Chavhanke’s Bindas Bol primetime show that termed Muslims joining UPSC as “UPSC Jihad.” Sudarshan News claimed that is exposing a “conspiracy of Muslims to infiltrate their way into government service.” The top court urged that a message must be sent to the press that “a particular community cannot be targeted” in the name of investigative journalism and that it’s not healthy for democracy.

The court, not only restrained the channel from broadcasting the remaining episodes but also pulled up the Ministry of Information and Broadcasting and the National Broadcasting Association (NBA) for their alleged inaction, seeking suggestions from the Centre and the NBA for strengthening the “self-regulating mechanism for electronic media”.

A Right To Information (RTI) received by Ritika Khera and Anmol Somanchi from the Bureau of Outreach and Communication (BOC) under the Union Ministry of Information and Broadcasting in 2019 made some very glaring observations.

Before 2014, Sudarshan got negligible funds from the Central Government for advertisements. But for them, ‘ache din’ truly began when PM Modi took center stage in New Delhi. As per the RTI, the Chavhanke-led channel received no funding from advertisements in 2011-12. A year later that rose to Rs 2.2 lakh, then falling to a paltry Rs 1.2 lakh in 2013-14. But, this was where things changed.

Another set of RTIs filed under the BOC, revealed a sharp decline in the share of government advertisement expenditure on electronic media in 2017-18 compared to the previous years but only Sudarshan News’s advertisement spending expanded.

In addition to this, an RTI filed by Umashankar Dube, a Lucknow resident, revealed that Sudarshan News received Rs. 2.68 crores in advertisements from the Uttar Pradesh government between April 2020 and March 2021. The channel also is in a sponsorship partnership with Koo, a social networking site that markets itself as the desi answer to Twitter.

“The funding of Sudarshan News has tremendously spiked since BJP has come to power. It is evident from the information that we have gathered. It is not that the government is unaware of what the channel broadcasts. It’s a mutual understanding – you push forward our Hindutva agenda and we would fund you. If the government is even a little concerned, it may reconsider the channel’s license, as the channel currently has a license for news,” Anmol Somanchi, an independent researcher, told Mojo.

Mojo reached out to the editor-in-chief of Sudarshan News, Suresh Chavhanke. He asked us to get in touch with his Channel Head Mukesh Kumar, and that Kumar would schedule an interview. After three days of continuous follow-up, Mojo was told that the interview was “not possible.”