‘Tour of Duty’: A Bad Idea Whose Time Has Come

If the Indian Army and Ministry of Defence (MoD) has its way, a new channel of recruitment for the armed forces, named ‘Agnipath‘ (path of fire) may soon become reality. Encashing on India’s demographic bounty where more than 50% of the population is below the age of 25, this unique ‘Tour of Duty‘ will open the gates of armed forces to volunteers for a period of four years, including onboarding, training, leave and actual service. 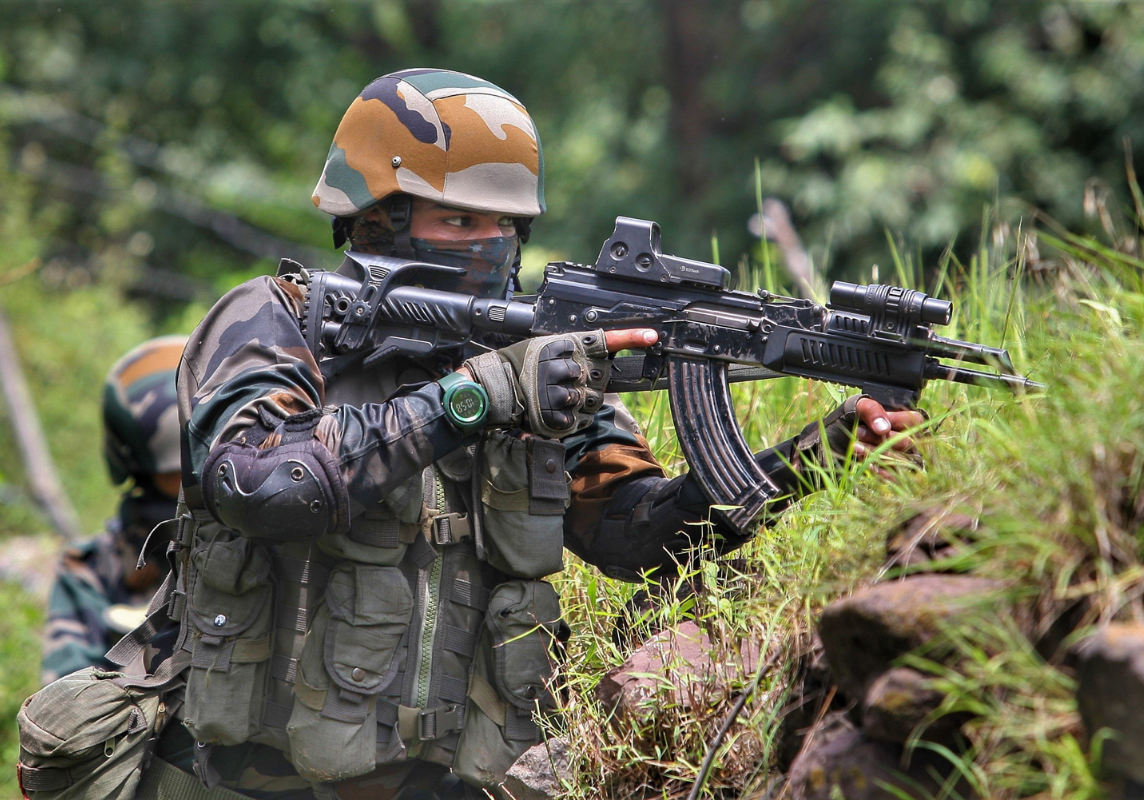 ‘Agniveers‘ selected under this scheme may soon hold a gun and stand watch on some of the most hostile posts few armed forces in the world have to deal with. Over time, the bulk of regular recruits in the army will come from this scheme — a service that hithertofore was seen as a “way of life” rather than a tour of duty. If the test balloon survives internal and external metrics (much of which is cloaked in secrecy), it is only a matter of time before TOD sailors stand watch on naval warship gangways or push ordnance under an IAF fighter aircraft belly.

I recall a strange incident from the 80s. A bunch of officer cadets were being drilled to perfection by a dedicated team of naval gunnery instructors (GI). These GIs, most of them senior sailors of the rank of Master Chief Petty Officer (MCPO Class 1 or 2), were the epitome of good order and naval discipline. Tough as nails, raised and honed under fire, they represented the best tools to shape a walk-in officer cadet from a college. We trained for three years under these GIs, though even a few weeks would have left a lifelong impression.

Tirath Singh, MCPO II, a thoroughbred Khalsa (Sikh) who followed every naval tenet of his religion, was a particularly strict GI with no appetite for nonsense. So his outburst at a Sikh cadet when he found his weapon drill less than perfect, though not unexpected, took us by surprise. The shock traveled at the speed of sound through rank and file on that parade ground as Tirath Singh MCPO I bellowed “you fukkan terrorist, up rifle and round the parade ground until further orders (sic)”.

Coming on the heels of Operation Bluestar and all its blowback on the Indian armed forces, what made the senior GI see shades of “terrorism” in one of our best cadet’s minor demeanour on parade still leaves me flummoxed. Today, this could gaslight an entire continent. But here’s the great leveller: Tirath Singh MCPO II and the errant cadet came from the same religion. Both were 24-carat soldiers, committed to the same cause — not for a ‘tour of duty’, but for life.

The beauty of the moment? No one took umbrage; nobody played up a religion card or petitioned the CO for hate speech. Both Tirath Singh and his officer trainee — as all of us — were cut from the same gaberdine. Our Gunnery Officer Lt C Makandar, Special Duties (Gunnery), officer-in-charge of Boat Pool Lt Mastan Singh, SD (Bosun), Chief GI Kazi — all of them prepared us for a life at sea — one where days stretch into weeks, weeks into months, and months stretch to years before you gain “sea legs” before you eventually learn to run a happy ship — not with band-aid fixes, but the “main engines” of harmony and esprit de corps.

Even as I write this from a perch of privilege as a veteran officer drawing a pension and lifelong ECHS cover, I cannot but reflect on the plight of sailors, airmen and PBORs who endure many challenges, in and out of service, claiming what was rightly due to them. There were moments of extreme distress, pain and agony: the extended periods of absence out at sea; the humble facilities one had to often endure; the non-family stations and field postings (read ships) where one often got “out of sight, out of mind” — all these and more. But we braved them all — me and my men, like countless others — because we never thought of the navy or any service as a “job”. It was a way of life — a life of honour, dignity and passion.

Spare a thought for jawans and PBORs who endure extreme hardships for what can only be ascribed to two simple reasons: loyalty — commanded by good leadership — and the contract of pension and medical cover. The former makes them seek “re-engagement” (during a downturn, for instance, this keeps home & hearth going) for a further period as defined and approved by the competent authority. The latter keeps them from starving or living a life of indignity.

Both are excluded by the proposed TOD scheme. Four years of service means they’ll not even be entitled to gratuity (a vicious move nobody would will on a uniformed buddy). A 25% retention-carrot for permanent absorption would practically turn them into performing circus clowns.

Unlike the army, where a soldier will willfully lay down his life for the “izzat” (honour) of his paltan, the navy has no regimental culture. Naval loyalties remain affixed to good ships, good COs, or specialist affiliations — all of which will elude TOD recruits. Life at sea is hard, often striking a stark contrast to the landlubber life of other services. Everything is either too technical or too hard to master within 3-4 years. If I were a TOD sailor, I would spend 2 years in the grind and the rest planning my exit ashore. Of what use will such “agniveers” be to commanding officers who have to deal with a continuous scope creep as the navy spreads its wings across the globe? They may barely scale the lowest benchmark of “good messmate” before getting on to the path of resettlement. EXOs will soon be vetting more ‘resumes’ than ‘service documents’.

To be fair, I can think of a few sundry duties naval TOD recruits may yet fill. “HMP & VMP muster” during the daily “both watches” on a warship is one. These motley group of sailors deputed by different departments work under supervision of the shipwright to maintain hull and ventilation integrity. Other is filling the endless list of “working party” and “nominated to volunteer” lists that constitutes an EXO’s daily migraine.

As on date, such duties are being undertaken by regular sailors, often over-trained and over-qualified. The scope and magnitude of secondary duties are ever-increasing, providing easy justification for a crafty mind to let in TOD through the back door. But to design a scheme that facilitates carriage of such agniveer “Johnny-come-latelys” on a seagoing warship is sacrilege in our context. To keep them ashore would mean denying the hardworking regular recruit his “soft” posting. A delicate balance, already disturbed by ill thought-out short-service commission schemes, is set to be completely wrecked by extending it to the ranks.

A navy of the 21st Century deals with cutting-edge technology, owned and operated by the officers and sailors. Every man jack in the navy is a “techie”, though the system may be loath to admit this. Think about this: the only two civilian components of a warship — the ship’s barber and/or civilian bearer — would spend more time at sea than a TOD sailor. On a flight deck, a TOD sailor would man the chocks and lashings and nothing more. How would he/she be employable the rest of the time, all the while gaining full access to the navy’s deepest secrets?

I have seen civilian recruits approximating TOD being exploited with the promise of permanent employment (dismal as they come) in the aviation world and offshore industry. B-Tech engineers from tier 2 and 3 colleges are recruited by contractors of oil and gas PSUs for abysmal wages and living conditions with the lure of ‘on job’ offshore experience. Their lives, grooming, wages, safety, reemployment, etc. mean nothing to the organisation. Thankfully, they are not trained to access or use weapons; neither is there any chimera of “izzat” or “service before self”.

How future commanders in the Indian armed forces will run their ships and establishments with TOD recruits remains to be seen. The worry lines i have seen on the faces of privileged officers (with and without pension) as they approach the end of their usable life in service don’t inspire much confidence. Often, the services’ apparent indifference to their plight turns them against the establishment — a PTSD that will linger long after the architects of this exploitative system have re-attired. This could prove to be a fertile ground to recruit mercenaries by agencies that are inimical to the state. Do not forget, a soldier owns the nation’s deepest secrets.

In the debate leading to finalising contours of TOD, comparisons have been drawn to countries that have resorted to conscription or schemes akin to TOD. This is unfortunate and must be viewed against Indian realities. We have no dearth of volunteers or the right stuff, but an abundance of “yes men” & funky ideas borrowed from here & there, with no sensitivity to our context. Our soldiers are the finest in the world. They deserve better shipmates than TOD sophomores.

This ‘cut-copy-paste’ idea should emanate from the army comes as no surprise. Steeped in a “much less with much more” culture, officials from the Indian Army who framed the rules, endorsed, or embraced this concept, owe an explanation to their soldiers why they couldn’t consider a no-holds-barred approach to cutting flab before polluting their paltans with TOD recruits. The public silence of navy and air force officials on this debate is ominous. In the absence of informed opinions from veterans, it simply reinforces my hunch that we operate in a financial vacuum where we want to rob Sepoy Patel to pay Col Paul’s pension. The bureaucrats will, of course, stoop to conquer such low-hanging fruits.

I leave you with this tweet by Twitter user and fauji brat Joe (@JoBeingJoe) who shared a picture taken before Indian Army’s 2 Rajputana Rifles mounted a counterattack to retake Tololing during Kargil War, June 1999. 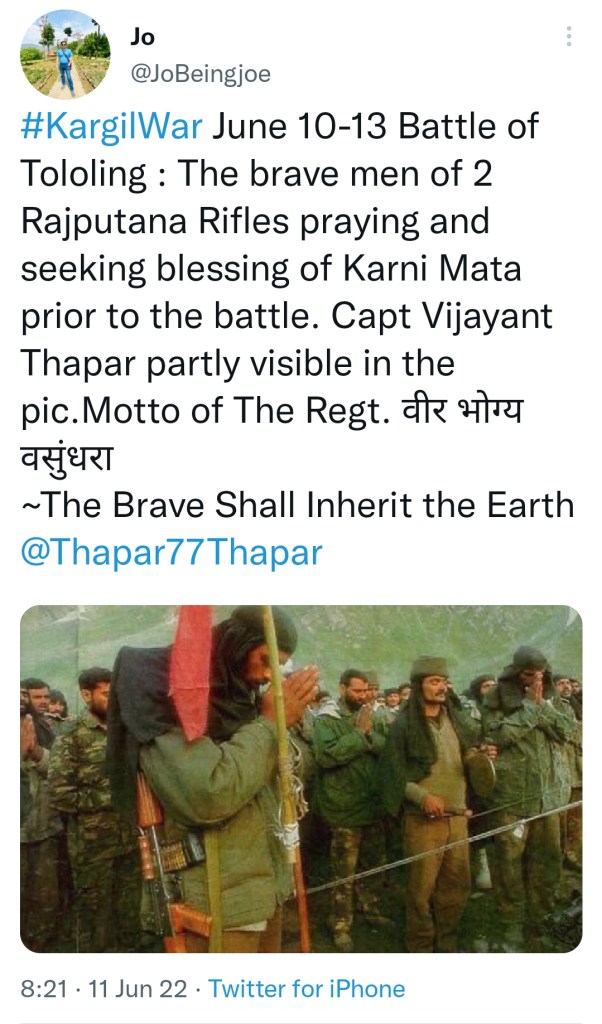 Anyone under the delusion that an “intern” on a 4-yr Tour of Duty will match up to such Himalayan challenges & put “izzat” of the Paltan before life & limb is clearly hallucinating. Or worse — lying.

If you think pension is expensive, try defeat.

Cdr KP Sanjeev Kumar is a former navy test pilot who calls himself a “full-time aviator; part-time writer”. He blogs at www.kaypius.com and can be reached at realkaypius@gmail.com or on Twitter @realkaypius. The views expressed in this piece are personal.

VIDHI WRITES: India Has Signed A Landmark Global Tax Deal. This Is What It’s About.
Blasphemy & Sedition Laws: Why These Are Affecting The Actualisation Of Free Speech