From UP to Delhi: Understanding ‘Bulldozer Politics’

In the past few weeks, violence between Hindus and Muslims in India has broken out in at least nine states coinciding with Hindu festivals throughout that time period. The communal clashes have followed a similar pattern: right-wing Hindu groups have led processions into Muslim-majority areas, backed by anti-Muslim sloganeering escalating into stone-pelting and vandalism. So far, police have arrested mostly Muslims in connection with the riots. 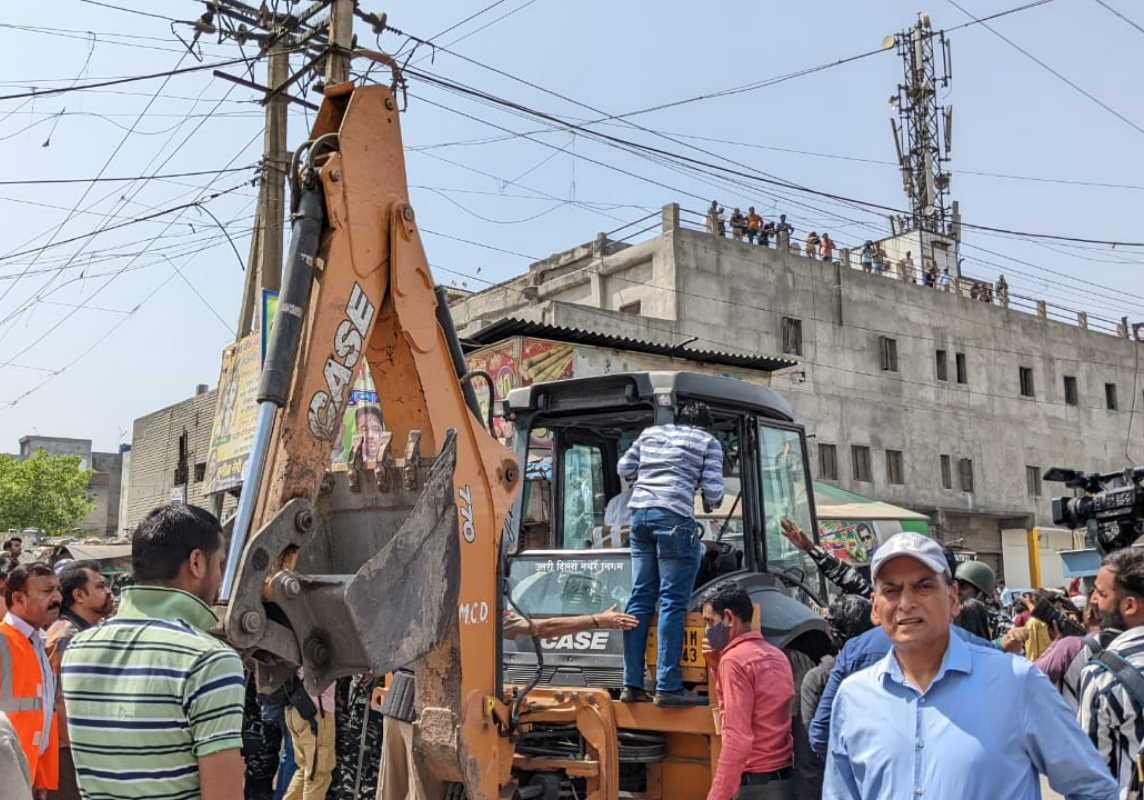 In Uttarakhand’s Dada Jalalpur, the police named 40 people in the FIR post-violence, 14 individuals were arrested – all of whom were Muslims. In Delhi’s Jahangirpuri, 36 arrests have been made, and at least 20 were Muslims.

In the aftermath of the violence, local BJP officials in at least 3 states issued orders to use bulldozers to raze the homes and shops of alleged rioters. In each instance, the targeted properties were labeled as “illegal encroachments.” The day after the bulldozers, manufactured by British company JCB, were sent into Jahangirpuri in Delhi, British Prime Minister Boris Johnson inaugurated a JCB factory during his India visit. Elsewhere around the world, similar JCB bulldozers have been used by Israel to render Palestinians homeless. 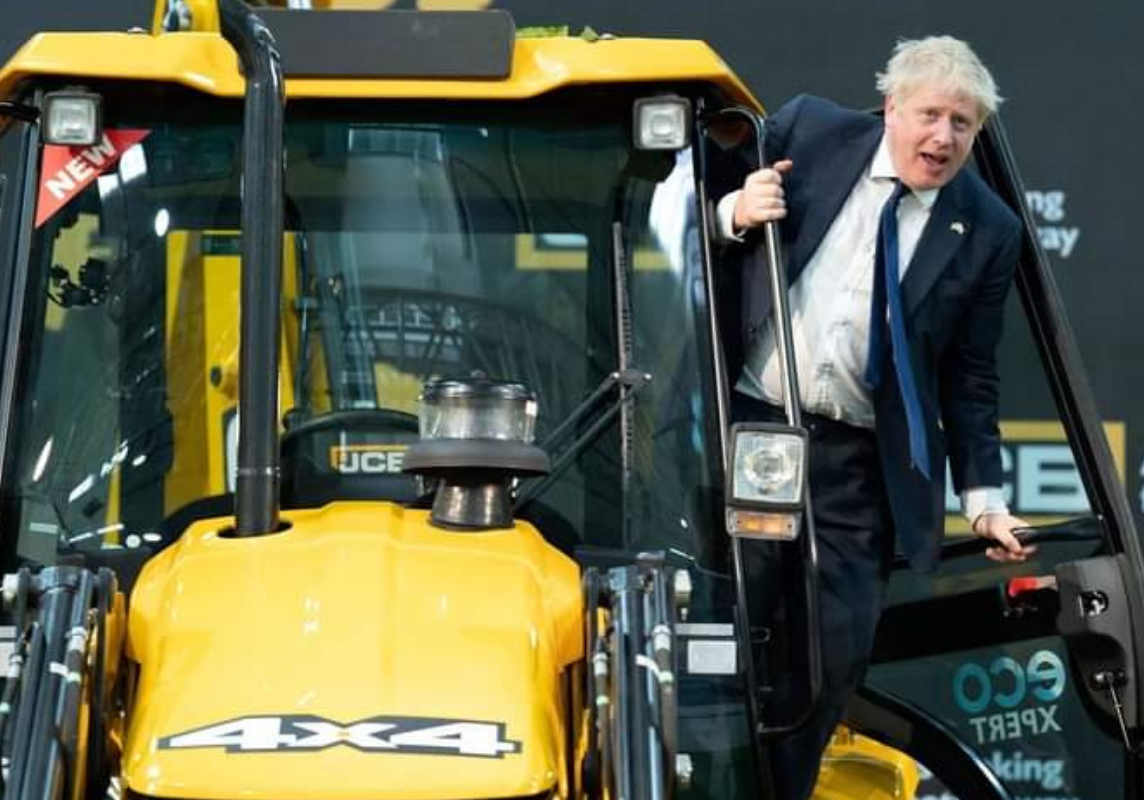 Since Uttar Pradesh Chief Minister Yogi Adiyanath’s triumphant campaign on his use of bulldozers to win re-election last month, state heads in Madhya Pradesh and Gujarat have followed suit with polls to be scheduled in both states soon. Right-wing Hindu preachers, called dharma gurus, have also called for the demolition of Muslim houses amid the violence.

The police have responded in kind. Akhtari, a 65-year-old grandmother in Jalalpur, Uttarakhand, told Mojo following communal violence on April 17 there, “The police using loudspeakers made announcements in the Muslim areas. They said that if they did not get 40 Muslim men whose names had been given in the FIR [criminal complaint], they would demolish the houses of all the Muslims using the JCB that was stationed right outside the lane from where the Muslim-dominated area began.”

While laws for tearing down “illegal encroachments” vary by state, legal experts agree that these recent demolitions were illegal. Petitions have been filed by individual lawyers and organizations to the Supreme Court, but they have yet to be heard.

Indian Muslims have found themselves stuck in dire straits with no aid from the government and media underreporting their plights.

While the government can demolish constructions that are deemed illegal, a few houses which were reduced to rubble were built under the Prime Minister Housing Scheme.

Heartland and the origin of Bulldozer Politics

In an interview on a chopper to a TV channel right before the elections, Chief Minister Yogi Adityanath told the reporter how JCBs were a part of his campaign. Moreover, the Chief Minister was nicknamed ‘Bulldozer Baba’. Before and post the election, supporters of the Saffron party were seen celebrating with bulldozers. BJP supporters have been vehement in attributing the historical electoral victory to Baba’s bulldozers.

Contrary to the symbolic imagery of the JCB, the governments have time and again reiterated that the sole motive of these bulldozers is to remove the illegal encroachments.

The self-proclaimed Dharm Gurus have taken to the JCB just as well. In Uttarakhand’s Dada Jalalpur, violence broke out on the eve of Hanuman Jayanti as a consequence of a rally that was crossing the local mosque playing Islamophobic songs. After alleged stone-pelting, at least 10 houses of Muslims were vandalized and at least 4 vehicles torched.

Silence, Intimidation, and Actions of the Administration and State

The violence in Madhya Pradesh’s Khargone resulted in several houses and shops being razed by the administration in the same area where the skirmishes broke out. A total of 16 houses and 29 shops were razed post-Ram Navami violence. People who lost their source of livelihood and shelter in this anti-encroachment drive were mostly Muslims.

The Home Minister of Madhya Pradesh Narottam Mishra in an interview said, “Jis ghar se patthar aaye hai, us ghar ko pattharo ka hi ghar banayenge.” He admitted that laws were bypassed and that Muslims should not expect justice after committing such attacks. While the Home Minister said this, another mouthpiece of the government, the Public Relations Dept which goes by the name of Jan Sampark Karyalay tweeted a picture of bulldozers demolishing houses saying that strict action was being taken against the stone pelters.

The legal aspect of bulldozer drive

Demolition by the govt has to be preceded with prior notice in every state – this condition was not met in Madhya Pradesh or the national capital New Delhi.

Mojo Story tried digging into the legality and constitutional viability of these anti-encroachment drives. The Supreme Court in its rulings in the years 1985 and 2017 mentioned that the demolition drives have to include meaningful consultation, be just and be “consistent with fundamental rights of life and dignity.”

“Right to life and livelihood was taken away from the residents of Jahangirpuri and other places,” said Adv Anas Tanvir, who is one of the advocates for the victims of demolition drives in Jahangirpuri. He continued, “I believe this is all happening under clear political influence and is being put under the garb of ‘illegal encroachments.’ There is a certain rule of procedure that needs to be followed and it is not. However, I do believe that the Supreme Court will do justice to the victims.”

The Supreme Court in the case of Jahangirpuri did intervene and stopped the demolition drive in the area. On 9th May, bulldozers were seen in the Shaheen Bagh area of Delhi too. However, even in this case, the apex court took cognizance after a plea was filed by the CPI(M) and the matter is to be presented before Justice L N Rao’s bench. According to Live Law, the bench however refused to entertain the plea saying that it could not interfere at the behest of a political party.

Earlier, in the case of demolitions in Shaheen Bagh, CPI(M) had moved to Supreme Court, however, the apex court had denied taking any cognizance in the matter citing that the Court ‘cannot interfere at the behest of a political party.

On May 9, civic officials reached the Gurudwara Road Area of New Friends Colony, where the encroachment drive was supposed to happen. Around 500m away from the spot where the drive began, police barricading and deployment of the police force could be seen. “They are not damaging the shops, just the temporary shelters which have not been in use”, said a local standing at the spot where the demolition happened. The bulldozer could be seen moving ahead, for further actions. However, not much damage was done to the properties of the locals.

It was SDMC’s Central Zone Chairman Rajpal Singh who confirmed that a demolition drive was to be carried out in New Friend’s Colony today. “Our enforcement teams along with adequate police force and equipment such as bulldozers and trucks have started removing illegally set up kiosks, temporary structures, shanties or shops from near Baudha Dharma Temple, Gurudwara Road and nearby areas in New Friends Colony. Our drive against encroachment will continue,” Singh told PTI. New Friends Colony falls under the Central Zone of the SDMC.

Vidhi Writes: How RBI is Helping Towards Financial Inclusion
The Quiet COVID Calamity: Delays in the Criminal Justice System