Understanding the Rising Islamophobia in Karnataka

On September 28, Belagavi awoke to one of its most gruesome murders in the recent past. The body of 24-year-old Arbaaz Aftab was found on the district’s railway tracks with his head cut off from his body and his hands tied. 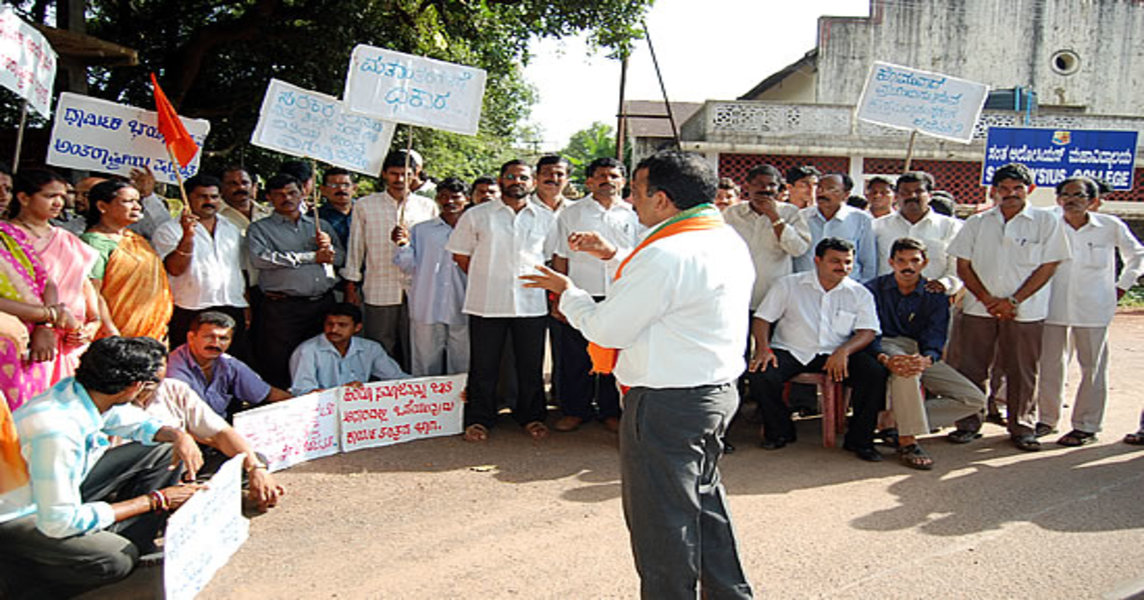 For several days before his murder, Arbaaz and his mother, Nazima Shaikh had been receiving relentless calls from right-wing vigilantes, constantly harassing them. These calls were made by vigilantes belonging to Sri Ram Sene Hindusthan, a breakaway faction of Sri Ram Sene, a boisterous right-wing extremist group that has been active in Karnataka for over two decades. The group was responsible for the 2009 Mangalore pub attack where members assaulted young men and women in a pub in Mangalore for allegedly violating traditional, Indian values, leading to the hospitalisation of two women.

In the many calls made by Sri Ram Sene Hindusthan members, Shaikh said that she and her son were repeatedly threatened by the men, who “warned” them of dire consequences if Arbaaz didn’t break off his relationship with the Hindu woman. The men went even further and demanded a sum of Rs. 90,000 which Arbaaz had to pay by selling off a car. Despite adhering to their threats, Nazima lost her son.

But what gives these extremist groups impunity to openly commit a cold-blooded murder without the slightest worry of repercussions? The story dates older.

With a nearly 13% Muslim population, Karnataka is home to the second highest population of Muslims in Southern India. Islam made its way to the state in early 7th century and cemented its place with empires including the Bahamani sultanate of in Bidar and the Adilshahi dynasty in Bijapur. Perhaps the most memorable Muslim emperor is Tipu Sultan from Mysore, known as one of the few leaders undefeated by British and believed to be a tolerant and just ruler.

While Independence from the British and the democratic, secular rule that ensued saw a Hindu majority in Karnataka, the history of Islam and the people who follow the religion remain a significant and integral part of the state.

However, from the 70s, there have been efforts by certain groups of Hindus — particularly Gaur Saraswat Brahmins — to tighten the religious noose on the state and coastal Karnataka has been the hot bed for their experiments. Large parts of Karnataka, including the coastal and southern parts, have historically been agrarian lands with indigenous cultures at the forefront. With Hindu extremist groups like Vishwa Hindu Parishad (VHP) staking a claim in common spaces, especially during the Babri Masjid controversy, these indigenous cultures were lost.

Arbaaz’s murder is only one among the several instances of Islamophobia seen in the state just in the last few months.

Just 10 days after Arbaaz’s murder, a Muslim couple who own a meat shop were attacked in the outskirts of Belagavi. Afsana Hasan Sab Khureshi and Hasan Sab, the couple, who own a chicken shop, were asked to close their shop for the opening of a Hindu temple nearby. Despite complying to the ridiculous demand, members of a right-wing group vandalised the shop and assaulted the workers when they had come to clean the shop in the afternoon. Incidentally, the couple had donated Rs. 2,500 for the construction of the temple. Despite this, the right-wing group tried to extort money from Afsana and threatened her family telling them that they won’t be allowed to live in the town.

Despite the Sab’s instantly approaching the police and skiing for the goons to be arrested, the police took action a few days later when the video of the mob vandalising the couple’s shop went viral. A few days after this, another shocking incident took place in the neighbouring district of Bagalkot.

In Bagalkot’s Ikkal town, two minor boys were accosted by a mob of 15 men and brutally thrashed for wearing skull caps to a private tuition. In viral videos shared online, one of the young boys — who is allegedly just 14 years old — is seen bleeding from his mouth and his shirt is drenched in blood. Following this incident, Bagalkot police filed two FIRs. One lodged by the boys and their families against the goons and the other lodged by the goons against the boys.

This spate of frequent attacks began with an incident in Mysore.

On the 16th of September, Mohammed Safdar Khaiser, chief editor of Urdu daily ‘Kausar News’, was covering the demolition of a temple in Mysore’s Nanjangud Taluk, when he was assaulted by members of the Hindu Jagran Vedike — another right-wing extremist group. Demolition of over 100 unauthorised, religious structures were ordered by the Basavaraj Bommai led state government in September 2021. When Khaiser went to cover the incident, specifically when HJV’s leader Jagadish Karanth was speaking, he was heckled and manhandled by members of the group. While HJV argued that they believed Khaiser was an ‘outsider’ covering the event, sources claim that many continued to assault him even after learning that he was a journalist.

Peppered amidst all these attacks were several other instances where young people travelling in groups have been abused, extorted and moral policed by right-wing groups for travelling and being friends with people of other religions, most often Muslims.

It is no coincidence that attacks against minorities have increased since Basavaraj Bommai replaced B.S.Yeddiyurappa as the Chief Minister of Karnataka. Following the resignation of the latter, many people in the state speculated a rise in incidents of communal violence, further fracturing a state already on the brink of collapse in religious harmony. Only that now the violence is state sanctioned and state sponsored.

This is not a statement bereft of proof.

On October 17, Pramod Muthalik, founder of Sri Ram Sene openly announced a plan to demolish the Jama Masjid in Gadag and build a temple in its place. This incident — eerily resembling the early days of the Babri Masjid controversy — was not a solitary situation.

During the peak of the second wave of the COVID-19 pandemic, Bengaluru South MP Tejasvi Surya, along with three other MLAs walked into a BBMP COVID war room and accused 16 Muslim workers of blocking beds for COVID patients. The 16 workers were fired, even though investigations proved that the MLA had fabricated these charges. This was not the first time Surya has been Islamophobic. In the past, he has used derogatory terms and mocked the culture of Muslims on multiple instances.

A culmination of all these planned and unplanned attacks can be seen in a proposed anti-conversion bill which is presently being discussed by ministers including CM Bommai and state Home Minister Araga Jnanendra. While the discussion is still in the very early stages, the bill is supposed to be similar to the anti-conversion bill passed by Uttar Pradesh and Madhya Pradesh. While the Chief Minister has said that the bill — if passed — will only ensure that forced conversions are banned, given the history and reputation of the present government, it is safe to assume that the bill will only further target minorities.

But all hope is not lost. At a recent press conference, CM Bommai was asked to comment on the spike in moral policing and religion based violence, especially where the youth are victims. The CM responded saying “When sentiments are hurt, there will normally be action and reaction…Everyone must cooperate. Some youths need to ensure that the sentiments of
their society are not hurt. This is a social issue and we need morality in society.” Enraged by this comment, a coalition of several human rights organisations in the state took out a protest in Bengaluru on October 21, condemning the CM’s remarks.

In an open letter written to CM Bommai, the citizens said  “Your statements have essentially put a seal of approval on the social apartheid caused by Hindutva organisations. You have validated their skewed version of social morality and given your justification for stopping all inter-religious, inter-caste and inter-gender association. By stating that every action has a reaction, you imply that these violent reactions in the nature of so-called moral policing are legitimate reactions….By recognising this reaction as normal, you have failed all of us, who have a fundamental right to choose and conduct personal relationship without interference from state/non-state actors.”

We are waiting for a statement from you that you reject hate and communal politics @BSBommai avare#StopCommunalGoondagiri#StopHateSpreadLove#ದ್ವೇಷಸಾಕುಪ್ರೀತಿಬೇಕು#ಮತೀಯಗೂಂಡಾಗಿರಿನಿಲ್ಲಿಸಿ pic.twitter.com/Oy4i3eGQ9F

An overwhelming increase in communal violence coupled with growing pushback from citizens seems to be driving the social narrative in Karnataka, the only Southern state where BJP holds power. As ministers change and elections come and go, the how much of Karnataka’s social and cultural fabric will be altered is something only time will tell.