When looked at from the perspective of the lush, gooey ten-tier cake that is the IPL the Women’s T20 Challenge (WT2C) is mere breadcrumbs. It began as a single match held during the IPL play offs in 2018, turned into a three-team, four-match “bonanza” in 2019 and in 2020 was tacked onto the Covid-delayed, UAE-hosted IPL in Sharjah. In 2021, it was not held at all. 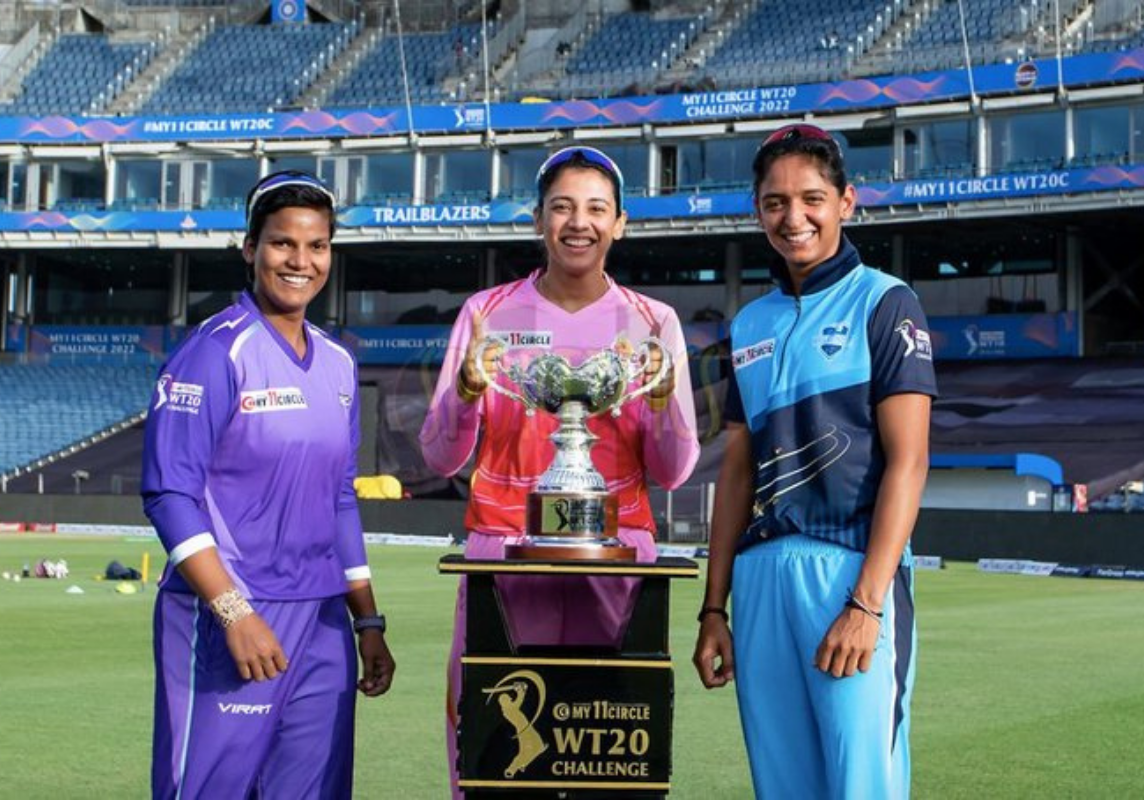 At the moment, the four-match event still forms part of Playoffs Week. It is being held, Covid protocols a factor, far, far away from IPL’s last four matches. The men will play in Kolkata and Ahmedabad, the women outside Pune, at the Maharashtra Cricket Association stadium in Gahunje. Even after hosting 13 IPL matches, a small scattering of Pune’s good folk turned out on Monday night to watch the women. Right there on the night, everyone saw how their beloved cricket board had been assiduously short-changing its women cricketers.

The women on the field were full-on in an event which is, as of now, an abject half-measure. On Monday night, there were fours, sixes, direct hits, tumbling catches, high fives, moments of brilliance, and moments of mirth. The broadcasters were on point, production of a standard the men’s game works with. There were new voices and faces in commentary across five languages which are lesser than the male nine, but a step ahead all the same for the women’s game.

The women umpires were top-notch, and the match featured women coaches in the mix, an all-around indication that there are folk in the BCCI that can turn out an event that reflects a commitment to professionalism.

Now, let’s talk numbers: on Sunday night during the final day of the English Premier League season, the Hotstar numbers for virtually the championship decider, Man City v Aston Villa top right of the TV screen read: 1lakh. On Monday night, during the first WT2C match, that number was 5 lakhs. (While City came back against Villa, the ongoing IPL deadrubber between Sunrisers and Punjab Kings had Hotstar numbers at 23 lakhs but that’s another strand of another story.)

If all is tickety-boo, then why the whingeing about breadcrumbs and short change?

Well, because the WT2C is an event that will last four matches and disappear.

Because it will be seen again as an enormous favour done to the women in the middle of staging the uber-complex, logistics-sucking IPL.

Because atop the BCCI volk who turn out events that look good on TV, there lie Indian cricket’s speed-breakers. The bone-shaking, progress-mangling rumblers of the road. That layer of power-brokers who will not let go of control of the keys to Indian cricket management.

The unpaid Office Bearers, who want to micro-manage because they confuse it with management.  At the moment, nothing moves if the secretary Jay Shah doesn’t sign on it. And if he’s okay with the idea, then president Sourav Ganguly announces it.

They may have cricket and its revenue-generating magic on their mind, but their decision-making could be weighed by or driven out of whim, cussedness, ego, bias, and stereotype. Professionalism is meant to set those responses aside. It is why the separation of policy and management was deemed mandatory in the Lodha reforms and exactly why the office bearers would rather eat rusted nails that let that happen.

Therefore, no matter what the current or past BCCI honchos were told about the viability or the necessity of having a women’s IPL (WIPL), there was no move in that direction. Other than the regular tossing of breadcrumbs. Talk about a WIPL was responded to with murmurs about ‘lack of sufficient talent.’ That was nixed by ESPNcricinfo’s  forensic audit which calculated that India had a big enough pool for a six-team women’s IPL.

Its findings bear repeating: of the 114 local players needed in a six-team IPL, India already had 40 “capped and India-ready” women cricketers. From an actual pool of 660 available women cricketers, India essentially needed 74 uncapped players spread across those six teams. Seventy-four out of 660, not quite the shortage of talent that generously leaked onto the cricket press. More like a shortage of official intent.

During the WT2C opener on Monday night, the Hindi commentators talked of the possibility that this would be the last of the WT2C, with the promise of a WIPL next year. In 2019, BCCI president Sourav Ganguly said a “seven-team” WIPL was “four years away.” In Feb this year, he said the BCCI was “at the level of formulation” for the 2023 WIPL. In between those two announcements was a statement in Nov 2021 by the Pakistan Cricket Board (PCB) chairman Ramiz Raja which said his board wanted to be the first Asian country to stage a women’s T20 league.

Australia and England already have women’s T20 franchise leagues and in March 2022, the West Indies announced its full-fledged women’s Caribbean Premier League to be held alongside the men’s event in the August-September this year.

For all the money through which it negotiates and engages with the rest of the cricket world, the BCCI may well be the last frontline nation to launch its women’s T20 franchise league. This is after 15 years of the IPL template that has been imitated by others – all those whose women’s leagues are up and running and those who may beat BCCI to that finish line.

Who knows, maybe the PCB announcement has ensured that there will be no turning away from the WIPL now. As things stand, the PCB’s women’s league is scheduled around February 2023. Last May, the PCB  announced a parental support policy for their cricketers, respecting the women’s contract for 12 months after giving birth, with a guaranteed contract extension for the next year and also giving the men 30 days paid leave for fatherhood duties.

That indicates professionalism at work towards the management of the game, the expansion and adaptability of policy, which includes women cricketers amongst its stakeholders. With no conditions attached – neither on-field success or those two other template faves used in India to beat back women’s cricket – ‘marketability’ or their ‘ability to drive revenue.’ Naturally, the BCCI hasn’t come up with any such women’s-cricket-centric policy initiative. Even after its women cricketers made the finals of both their world cups and pulled in tens of thousands into the grounds.

It’s been 15 years since the launch of the IPL, five years since the women reached the 50-over final, and 26 months since their ICC T20 World Cup final. BCCI is the richest cricket board in the world and still we have to be grateful that there’s a WIPL at the level of formulation.

See what I mean about breadcrumbs?

Vidhi Writes: Early Childhood Education Suffering Due to Lack of Governance
Whose Football Is It Anyway?