Bhavana Breaks Silence: “I am Not a Victim Anymore”

Actress Bhavana Menon broke her silence on sexual harassment and her fight for justice at We the Women Townhall. She spoke up, ending her five-year silence and declared that she would give a strong fight not just for herself but also for other women in similar situations.

Bhavana narrated her experience, saying that when it happened to her in February of 2017, her entire life was turned upside down, “I used to believe it was a long nightmare.”

She was constantly looking for someone or something to blame. “I kept thinking if my father was still alive, it wouldn’t have happened to me. I began blaming myself since I had so many tags placed on me. I urgently wanted to go back in time and change what had happened. It was like being in a loop. For a long time, there was a blame game going on,” she explained.

The most agonizing days of her life were when she attended court trials for 15 days. She recalled being in the courtroom from morning to evening for 15 days in 2020. She had to prove her innocence every time a lawyer cross-examined and questioned her.

“I felt like a survivor when I left the court after 15 hearings and realized I am not a victim anymore.”

Bhavana said that people were insulting her on social media after the incident and because of the incident she was denied acting jobs in the Malayalam film industry.

She claimed that negative propaganda was spreading on social media about her submitting a false complaint. It bothered her that some people suspected she was faking it, “All of this was weighing on me. I’d been victimized and wanted to shout at the top of my lungs.

When they were talking about things like it was premeditated and other hurtful things, they were very hard with their words. My parents didn’t raise me like that, that was like an insult to my parents, to my family. I am not a person who will do such a thing. I am not an evil person. My dignity was already snatched away from me and then I was victim-shamed.” 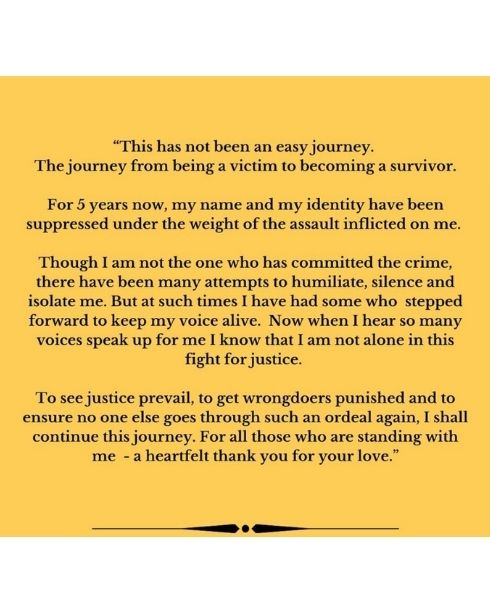 She did, however, expressed her gratitude to people who supported her, saying, “I must admit, coming up about the incident was cathartic.”